Identification of a steering wheel

I bought some parts from a jaguar dealer clearing out som of the old inventory. There was this steering wheel which I do not recognise as xk120 or mk1. Larger diameter than the Mk1 and what is odd is that it is 100% made of metal and not Bakelite as usual in the 50’s jaguars. They believed it would fit a MkV but not sure. Anyone here with a good guess? 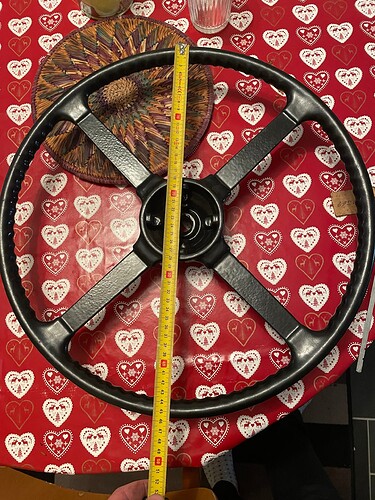 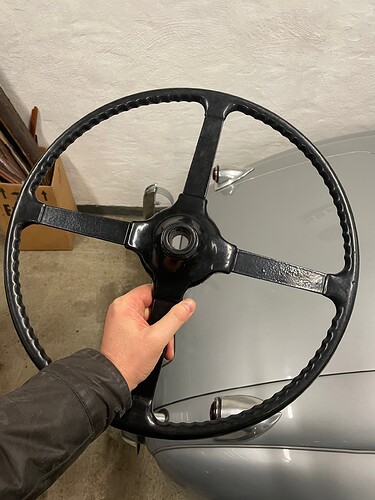 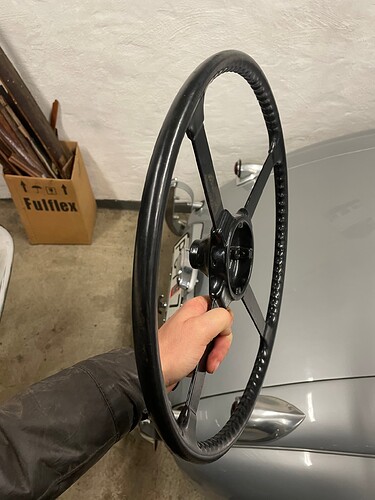 It looks like one from a mk9, and it’s the same diameter.
I’d say someone has stripped off the plastic from the spokes which often cracks up and has given it a repaint.

Possible, but find it odd that the rim and grip for the fingers are metal. I do not believe the rim has been covered with plastic like Mk1 as it would be very thick diameter. It looks like the rim is cast iron. Could it be some kind of reproduction steering wheel for let’s say a mk9?

I’m pretty sure it’s mk9. I’ve just looked at mine and it does appear to have a metal rim with plastic covered spokes.
It has a splined centre and machined to take a couple of collets. It fits to the column exactly the same way as on the MK2.
It’s not the same as the MK7 and 8.

Perfect, sounds like the case is closed then. Thanks a lot for your effort!
Br Svante

The wheel is the diameter for a Mark V and similar in appearance for the spokes and circumference but is not the original design for the portion “behind” the wheel for attachment to the column.

There is an original steering wheel of a MK V 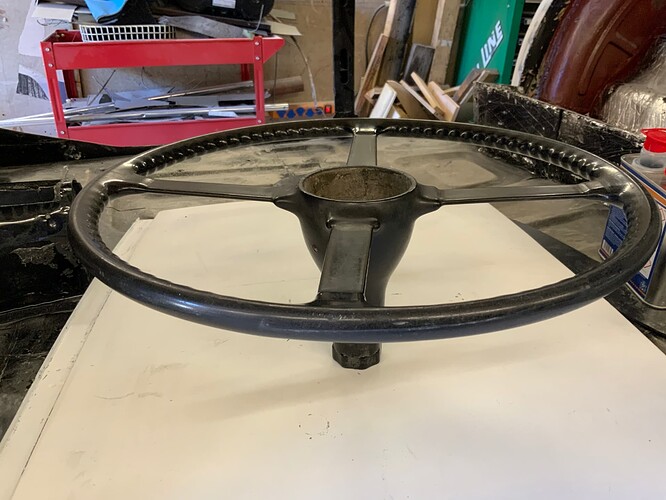 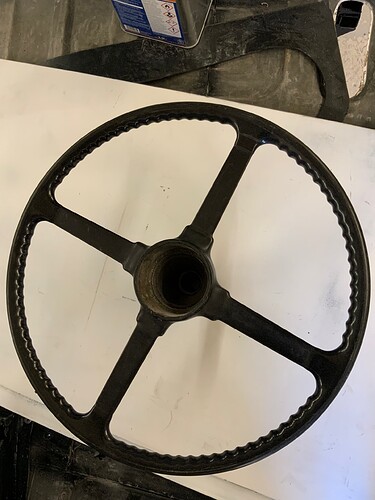 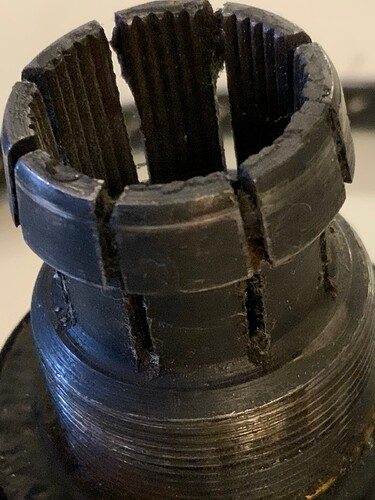 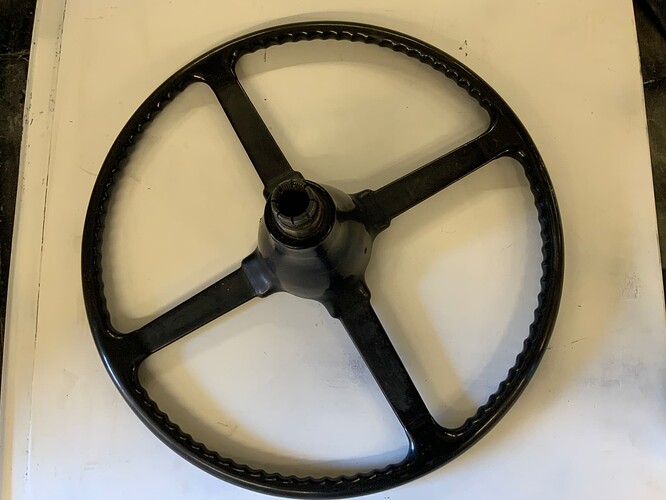 I can recall the steering wheel on my 1954 XK120 being metal and large and had the most dangerous horn button that came to a point. Jaguar may have used that on several models.

Yes, it looks the same as mine except for the centre. Very similar or identical to a xk120. I noted the other week that Xk120 and early MK7 steering wheels has one crucial difference even if very similar at a glance namely the diameter of the splined hole in the centre. I thought I could use a mk7 wheel in my xk120 but no, not easily.

If the steering wheel of your XK 120 is identical to that of the MK V and you need one. I would have one.
Geri

Thanks for the offer but I have a decent original wheel in my XK120. I always have my eyes open for useful spares though. It would be interesting to know if MkV and XK120 share the same steering wheel and I believe there are a few members here who might know.

Nope. The hub of the steering wheel is the same but the MKV and MKVII have a larger diameter than XK120.

All 1949-1953 Jaguars shared the pointy horn push until it was changed to the flat design.

I think at the time MKVIII and MKIX were in production and power steering had become available also the hub design had been changed to the type also shared on MK2 and later models, but the rim was still the old large one. 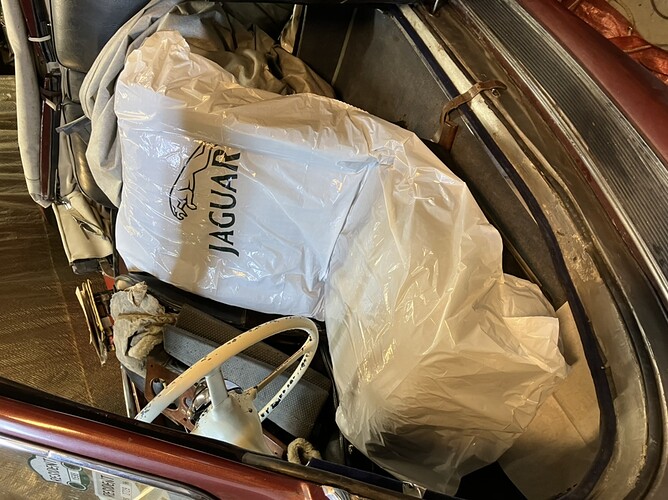 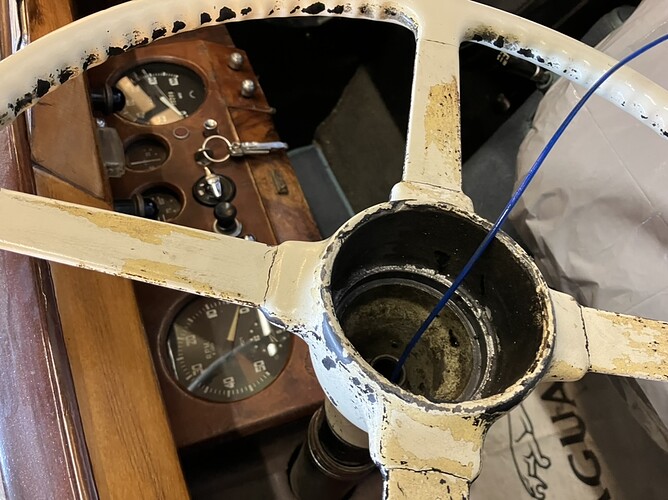 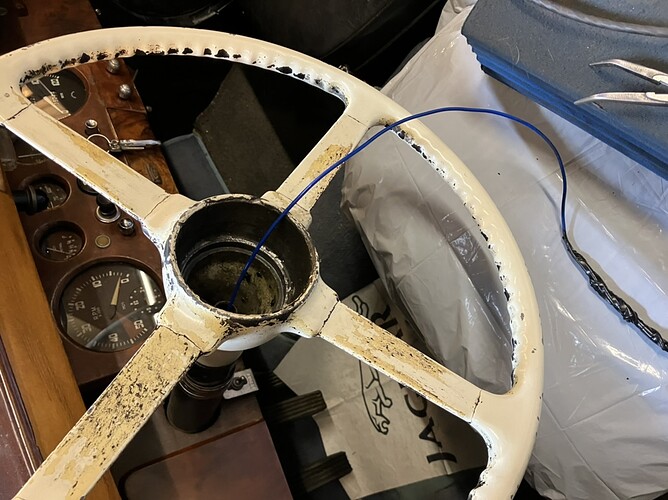 Pekka, thanks for the info. Amazing how many differences there are in a steering wheel that looks the same from a distance. Now I know my wheel is only suitable for a mk9 but it was cheap and came with a NOS horn push in a nice original box which fit many models.
A white wheel must be very unusual, have never seen any in a Jaguar in Sweden at least.
Hälsningar Svante

Similar, same long nose center hub, but not the same outer rim diameter; XK120 is 17 inches where Mark V is 18 inches, both made by Bluemels.

For XK120 there was an optional Brooklands wheel which was 16", quite different appearance, but also made by Bluemels. 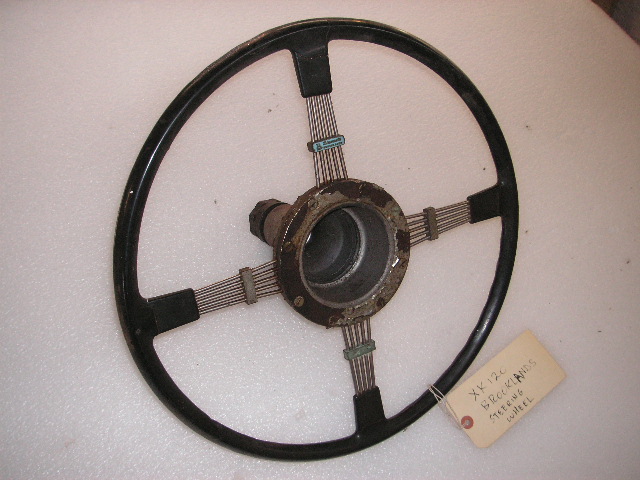