I had a belt go and it cut through the wires on the CPS. While I was ordering the CPS, I decided to replace the coil, cap, rotors, wires and plugs. Put everything back together and the car ran fine for a few miles before it started missing. The high tension wire on the coil was sparking. I checked the insulation on both terminals and made sure they were secure. The car did the same thing - runs fine in the driveway, on the road for a few minutes before it starts missing again.
I checked the coil wire and the resistance is a 4.5 k-ohms. The coil has a primary measurement of .8 ohms and a secondary measurement was 9.13 k-ohms. My Haynes manual says it should be .4 -.5 and 6-6.5 k-ohms so I’m wondering if the coil is causing the problem.
Any ideas?

If you still have the old coil, and it was working OK, why not refit it and see if you have the same symptoms.

It’s a shame your wife was so tidy, as, with most things, they don’t make them like they used to.

You may have a doggy Chinese made one. I would suggest getting a Remax version. These are made in England by people who know how to make them!

I am not sure what version you need, but this is a link so you have an starting point 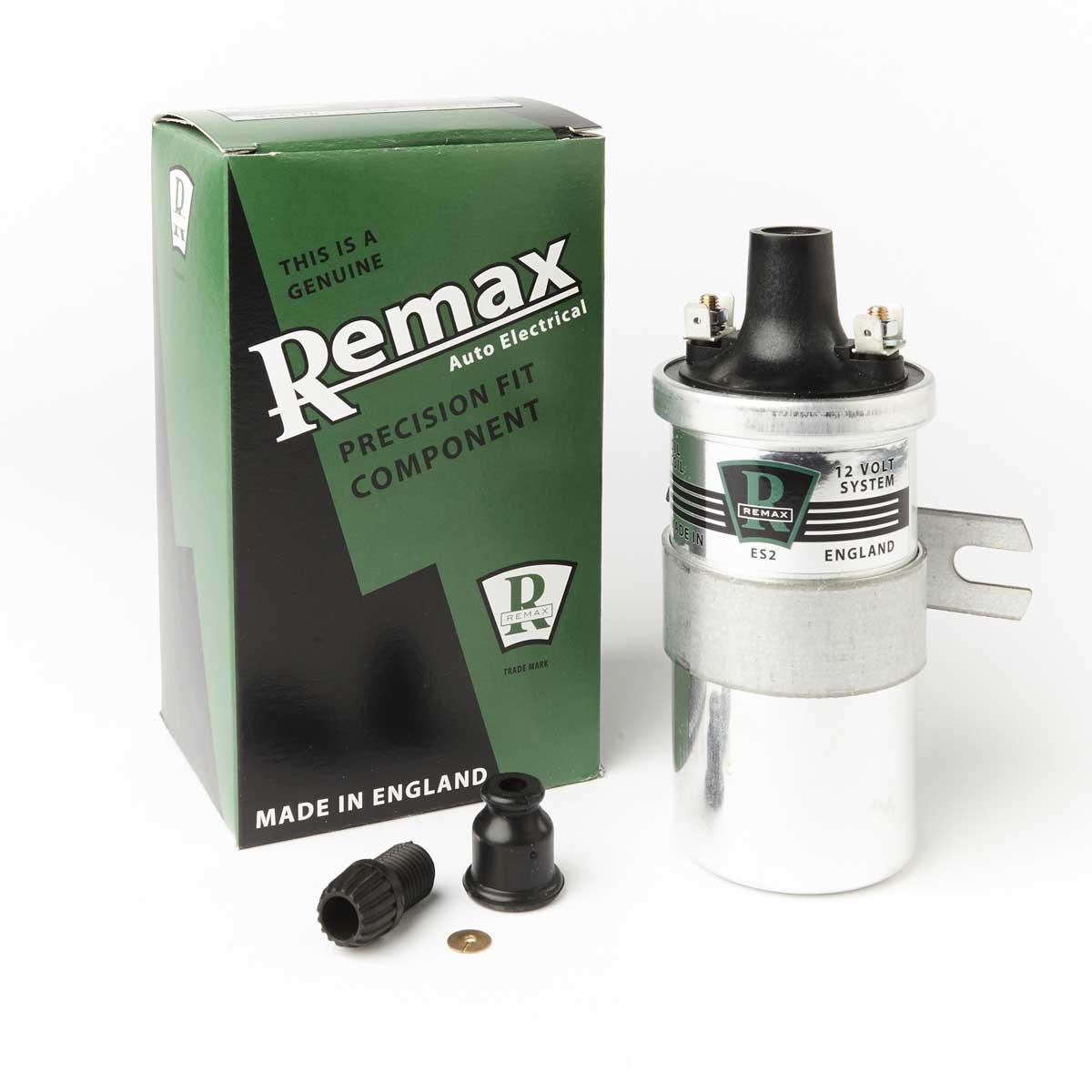 On my last local call, I found a Lucas coil. Put it in this morning and the car ran great and about twice a long as the other coil before starting to miss again.
Got it home and while in park and reverse, it didn’t do anything - all was normal. When I put it in drive, I’m getting sparks from the coil high tension output to both the positive and negative terminals on the coil. I secured the insulation on both of these after installing the coil thinking that the initial problem was they would vibrate loose and allow the spark to travel to one or both terminals.
Any ideas?

Is your distributor set correctly? Maybe three spark has a large gap to jump and decides to jump on the coil instead.

I did check the timing when I changed the cap and rotor to make sure it didn’t need any adjustment.

I don’t understand what changes after the car has been running for a short period of time. It runs smooth as glass for a period of time (this morning it was probably 15 minutes) before it starts to miss and the arcing starts.

You said, “I did check the timing when I changed the cap and rotor to make sure it didn’t need any adjustment”.

Do you mean you checked the timing chain indexer on the flywheel with the #1 piston at TDC? I’m not aware of any dynamic timing check you can make. The timing isn’t adjustable (you can’t adjust the timing by rotating the distributor), it’s electronically controlled by the ECU.

Yes I rotated the engine by hand to line up the indexer on the flywheel, made sure it was on the compression stroke and lined up the rotor. It’s my understanding that as long as that’s done, the ECU will handle any adjustments from there.

Besides lining up the indexer with the mark on the flywheel you also have to make sure the #1 piston is on the compression stroke AND at top dead center. Then you can check that the rotor is pointing at the #1 cylinder in the distributer.

The ECU determines when the coil will fire the spark for each cylinder. If you look at the end of the distributer rotor you’ll notice it’s quite wide …

… so if everything is adjusted perfectly the spark should fire when the middle of the rotor is opposite the distributor terminal. The wide end allows space for the ECU to advance or retard the timing while the rotor is still across from the terminal.

The ECU also determines when and for how long the fuel injectors operate.

So let’s assume the timing is off. Is it possible for the engine to run smoothly without missing for say 15 minutes before it starts to have problems?
I’ve had engines that were not timed properly but they ran rough immediately and didn’t smooth out until the timing was corrected.

If your engine ran smoothly before your belt mishap that caused you to replace the CPS, coil, cap, rotor, wires and plugs that should eliminate anything mechanical or fuel related.

I don’t think ignition timing has anything to do with your problem. The fact that the engine will run smoothly for a while and then starts to miss eliminates the possibility of the plug wires being out of order. I would also discount the CPS since the engine keeps running even though it’s missing.

The XJ40 has a real issue with distributor caps having carbon tracks that cause it to fail but usually the engine just dies. It’s possible your new cap is bad but that’s the last thing I’d replace (again

I know the plugs and wires are new but when the engine starts to miss pull off the plug wires one at a time. The engine should run rougher each time you pull a wire. If it stays the same, that cylinder is the one missing and you’ve narrowed it down to that plug or wire. If there is no change on all six cylinders when you do this test then it’s very likely that the coil is breaking down and giving you a “rolling” miss.

That said, it means you either create an easier path for the spark at the coil or a more difficult path further downstream from the coil in the chain to the plugs. The most obvious candidate is the king lead connector at the coil, which if it goes open circuit, leaves the spark energy to find earth directly.

I’ll check on the plug wires per Grooveman’s suggestion this morning.

In the meantime, let me outline my wiring to make sure I don’t have a problem there:

1 black wire from the amplifier is attached to the positive coil terminal.

It runs smooth as glass for a period of time (this morning it was probably 15 minutes) before it starts to miss and the arcing starts.

Here’s a wild theory about what may be causing your problem. It’s been a long time since I messed with an XJ40 but I have vague recollections that the ignition timing works like this. Someone more current or with a better memory is welcome to shoot me down in flames!

When the ignition timing in relation to TDC of #1 cylinder on the compression stroke of a cold engine is set as you described, the ECU which governs the advance/retard of the spark sets the ignition slightly retarded to facilitate starting and cold running.
As the engine warms up as monitored by the ECU, the ignition is gradually advanced. This alters the timing of the generation of the spark from the coil through the distributor rotor to the plug wire pick-up in the cap. If the rotor position in relation to that pick-up point is slightly out, the spark will not jump the gap from the rotor to the plug lead and hence a mis-fire.

The solution I found was to loosen the distributor body clamp and VERY slightly rotate the distributor a couple of degrees to effectively alter that timing until the engine continues to start and run smoothly cold or hot.

I could be mistaken but didn’t I read a while back on this forum that the rotors for the XJ40 contain some sort of internal resistor? If so, could that, like other electronic devices, break down under heat?

Should I rotate it counterclockwise a few degrees?

I can’t remember which way the rotor rotates!
Why don’t you start the engine, let it warm up until it starts to misfire and then slacken the clamp and rotate it slightly one way ot the other until the misfiring stops?

Rotating the distributor in this car will not effect the timing as it does in other cars with distributors. Those cars have either a mechanical (points) or electrical device inside the distributor cap that determines when the spark occurs. There is nothing like that in the XJ40, all the distributor does is provide a pathway for the spark from the coil to the plug.

The timing of the spark in the XJ40 is determined solely by the ECU. The ECU figures this out by a series of sensors (water temp, o2, engine load, etc). 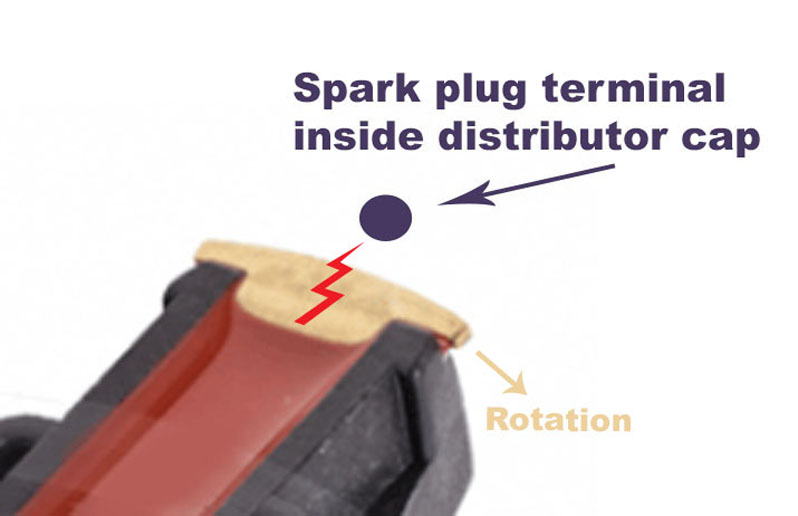 As the rotor spins clockwise the ECU ideally fires the spark while the center of the rotor head is adjacent to the spark plug terminal. The ECU advances or retards the timing by delaying or advancing the time that the spark fires by a few degrees before or after that ideal position. Since the end of the rotor is so wide it can still deliver the spark.

If the distributor was moved it’s possibly that when the ECU fires the spark that no part of the rotor head will now be adjacent to the terminal and therefore will not allow the spark to continue to the spark plug.