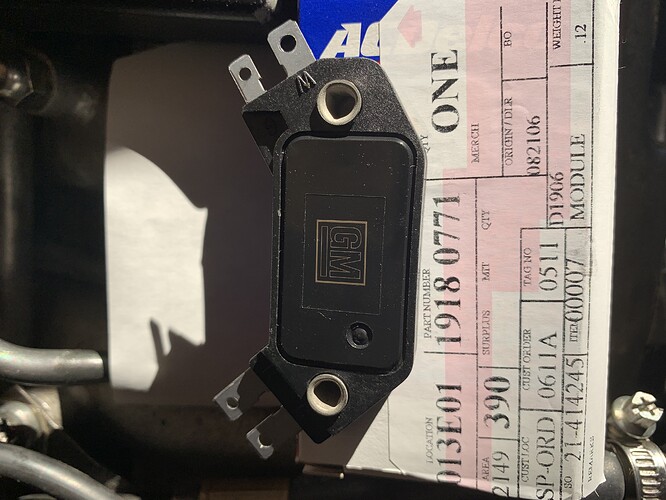 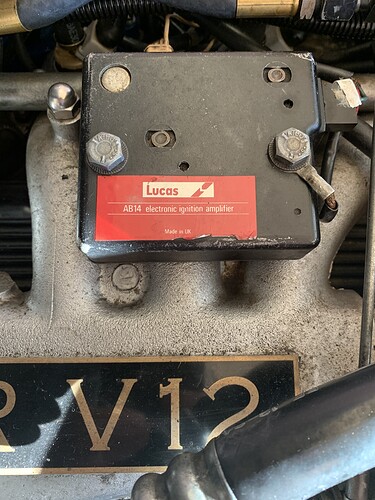 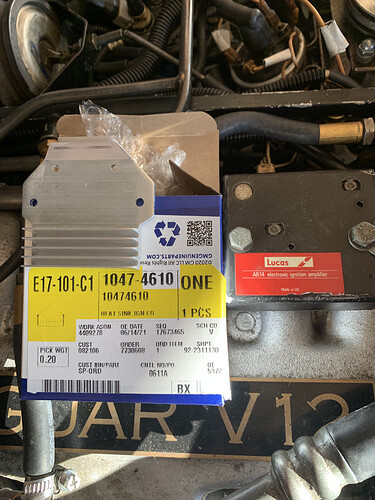 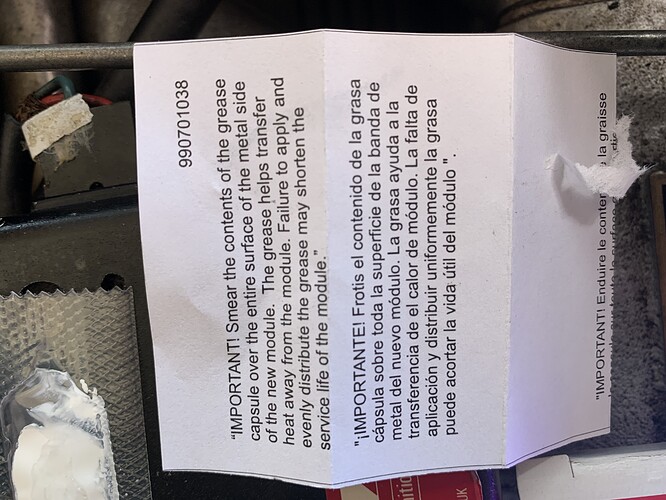 image4032×3024 2.26 MB
In the interest of science (LOL) and on going information, I posted some infrared pictures of my V-12 when I got my hands on the fancy infrared camera from work. One thing that did come up and got me thinking, especially after Kirby’s comment and write up in The Book was the ignition module looked extremely hot. (See attached picture). I thought I would order a new one just to have a spare at the very least. The temps around here have been insane the last couple of days and when I went to open the hood I literally burned my hand.
Low and behold quite coincidentally, by the way, my local GM dealership called to say my new part had arrived and to come and pick up. I was thinking about relocating the module but I also ordered their heat sink as well. In the package came a little pack of grease to smear all over it in order not to void warranty (OK then) . But I thought I would share since I spend a lot of my time in my profession trying to cool electronics in server main data rooms in order not to exceed 40C before electronic equipment will start to crap out. Just food for thought.
Kirbert (Author of the Book, former owner of an '83 XJ-S H.E.) July 1, 2021, 3:13am #2

That sucker is hot, and it’s clearly generating heat, not being heated by its surroundings! I concur, a new module is called for. Please change modules and repeat the IR photo.

I think you’re correct Kirby, you caught it and pointed it out in the first place. I’ll try and snaffoo that camera again for some more infrared pictures (I guess without the heat sink) the other comment you make in The Book is to make sure you have a solid ground connection.

While we’re at it, anyone else here have one of those optical thermometer things? Let your engine idle for five minutes, then report the temperature upper middle of the top surface, where it’s blinding hot in the IR photo above. Let’s see what’s the range of temperature reports we get.

I failed at my mission, I didn’t add the picture of the heat sink grease (mentioned in The Book). Ya got to hand it to those boys over at GM they don’t exactly give gobs of this stuff away. 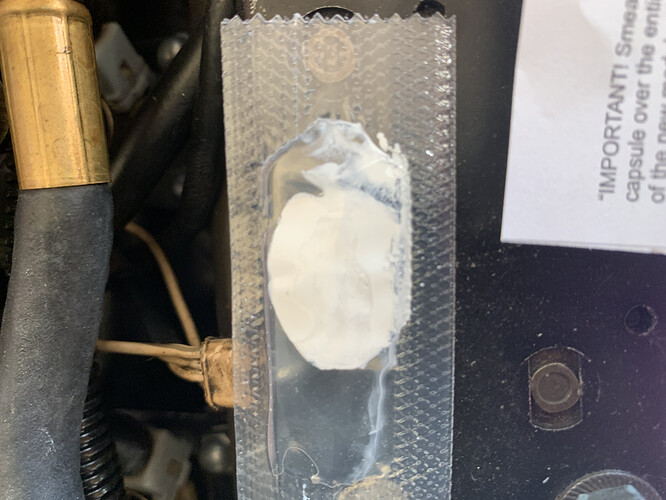 I bought my own heatsink grease, a much higher quality silicone base. The amount they give you is not enough, IMO, and it is kinda cheap. One module I bought, the grease was flakey, like it was very old. You have no idea how long these parts have been sitting on the shelf.

Here is a link to when I was doing a lot of temp readings on my Ignition module, I think at one point, I measured 200F! I actually messed around with different modules, and ended up putting a heatsink on the thing!

Just got a taste of that today. Did a nice drive around town, about 30 minutes, car is running great. Pull into Safeway for groceries, gone about half an hour. Go to start my 88 XJS, no start! Not even a slight catch. Humiliatingly popped the hood on my Jaguar in a parking lot. All looked good (I thought my previous work maybe knocked a wire loose?). Felt ignition amp, it was hot. The dreaded heat sink? Car was only running at 180F, and ambient temp is 50F. Car was down to 160F when I tr…

Here’s what I ended up doing almost 2 years ago! So far, so good.
Worst case scenario, when engine was fully warmed up, shut down, and sat for 15 minutes and then had to restart, I was measuring 200F on outside of ignition amp!

My heatsink has reduced that to 180F. 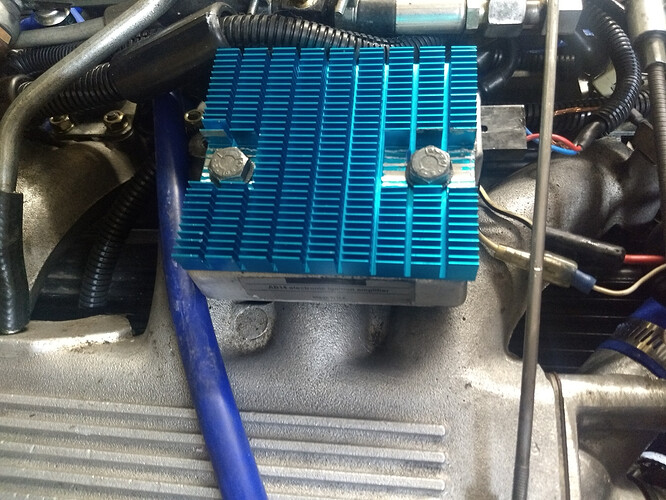 This is to address the range of temperature situation. First photo shows two inexpensive thermometers, each having a probe at the end of 36inches of cable. One shows temp. of central A/C vent, and the other has the probe inside the ab14 housing, which is attached to the firewall, with heat sinks, a ducted cold air supply, and a computer fan which comes on with the brake lights. The temp. of the ignition module housing runs around 30 degrees above ambient. Stopped in traffic, it might gain another 10 degrees. Heat soak is not a concern as the aux. electric fan is controlled by a thermostat which senses temp in the fuel rail. System has been operating for five years, trouble free.
If the AB14 croaks, it can be unplugged in its entirety, and the spare unit I carry can be plugged in very easily, as detailed in a previous thread. 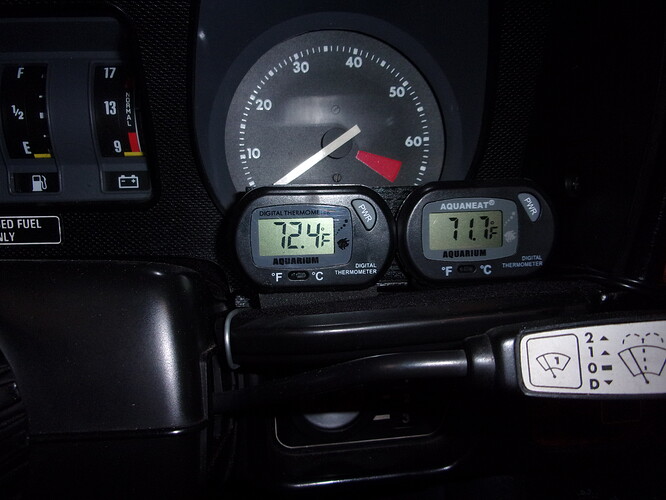 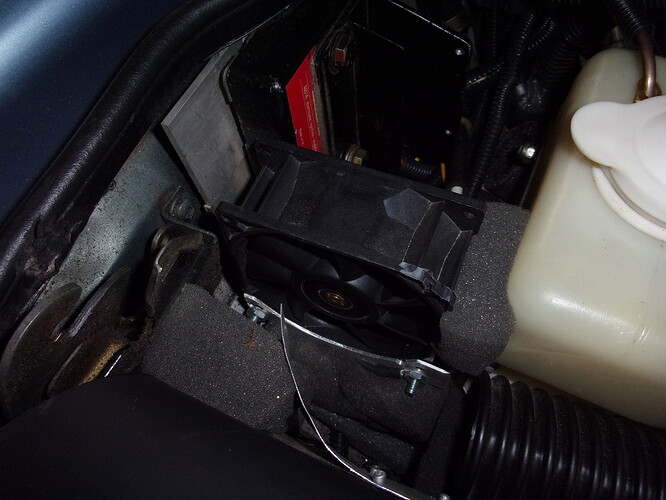 probe inside the ab14 housing, which is attached to the firewall, with heat sinks, a ducted cold air supply, and a computer fan which comes on with the brake lights.

With the brake lights! Clever! So the fan runs when you’re stuck in traffic but doesn’t when you’re cruising down the interstate!

OK I went in, to tackle this module issue . I got my new one all greased up and ready to go in.
As I take out the old one and flip it over, I think I’ve discovered my problem.
Singapore are you frickin kidding me.
Once again installed by my factory trained Jaguar mechanic???
Uploading: A3387E05-49F3-471F-B9B1-ED132E527D75.jpeg… 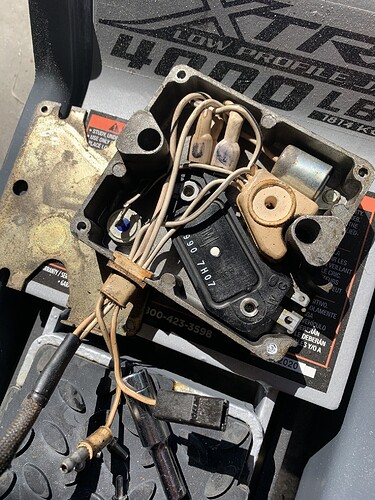 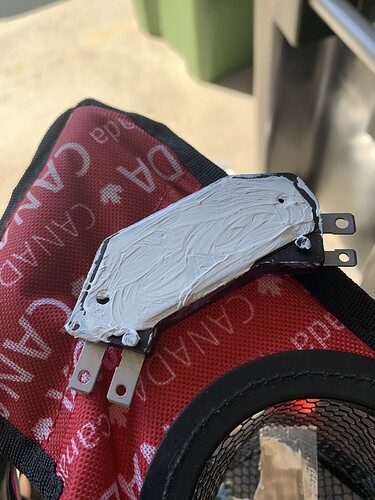 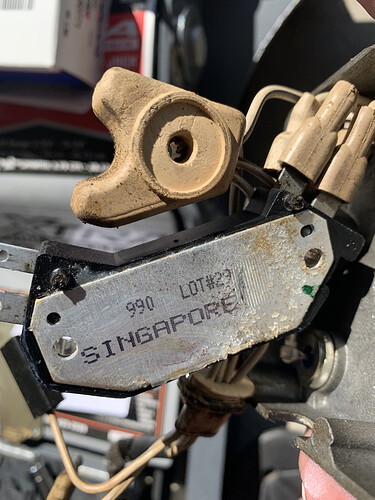 Was working, though, right? Couldn’t be too awful. 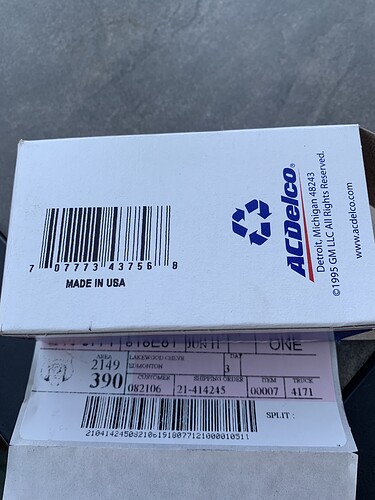 optical thermometer things? Let your engine idle for five minutes, then report the temperature upper middle of the top surface, where it’s blinding hot in the IR photo above. Let’s see what’s the range of temperature reports we get.

OK new module in and heat sink on , I’ll give it the five minute idle test tomorrow and take a heat gun measurement. We’ll find out if those boys over at AC Delco can build a proper ignition module. I can temporarily remove the heat sink. Also wanted to see if it corrects the stumble issue at idle.

While you are into the AB14, open it up again and remove the capacitor that is fastened with a small screw. Unplug it from the HEI module and throw it away. If it decides to short to ground, that will kill your engine PDQ.

which is attached to the firewall, with heat sinks, a ducted cold air supply, and a computer fan which comes on with the brake lights.

Thanks Dave so I’m just removing and tossing over the hedge ( not replacing) ? What is the function of that capacitor?

That technology goes way back to when cars had points and condensers. Then there would be an additional condenser (capacitor) that was supposed to reduce static in your AM radio. From everything I have read, you don’t need it. My own car runs just fine without it.

OK went back in , capacitor removed, managed to break the brittle plastic 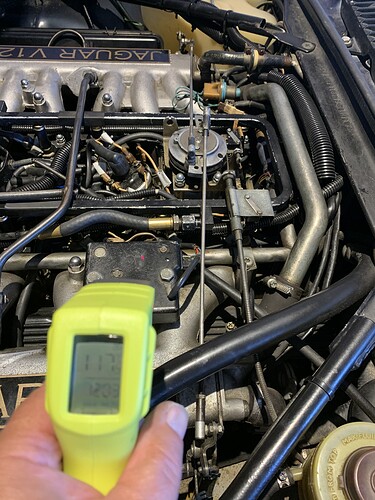 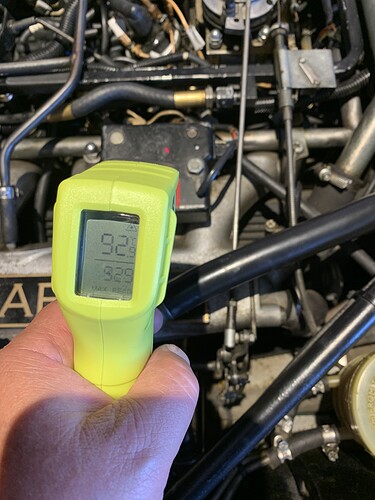 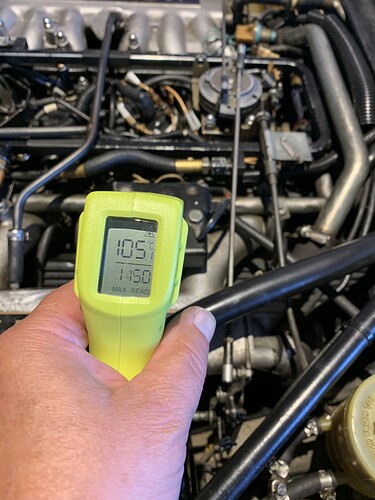 image3024×4032 1.87 MB
wiring connection point. Not sure where I’ll find another one but maybe I’ll just shrink wrap a rubber boot on it.
I managed to take a few temperature readings, one at start up and one after five minutes. Seems like it went from 92C to 117C after idling for five minutes.
Side note, the idle stumble seems to have disappeared which was the start of this whole misadventure, spark plugs to ignition module.
Who ever would have thunk it.
next page →