I know this has been mentioned MANY times on this forum but some things bear repeating. Again. And again. And again. Carry a spare ignition rotor and distributor cap in your spares kit in your car.

If you have a crank but no start situation and you ARE seeing about 200-250 rpm on the tachometer whilst cranking replace the ignition rotor with a new or known working unit. The rotors are known to break down (apparently an internal resistor fails).

Whilst on my way home from work yesterday evening (thank goodness I was running late and not in the midst of rush hour traffic) my '94 died at a stop light. Crank, rpms on the tach, but no start. Thankfully I had a new rotor in my ditty bag in the trunk (boot). Popped off the distributor cap, swapped out the rotor, and she fired right up. Other than the embarassment of holdiing up what traffic there was whilst peering under the hood (bonnet) of my car whilst sporting a dress shirt, tie and cufflinks it wasn’t that big a deal.

Ideally, the well-prepared Jaguar driver would not only carry spares but would be proactive in replacing parts like the rotor and distributor cap (and the crankshaft position sensor [CPS] about which I have previously written on this forum) before they malfunction and cause a situation. I guess I am not a ‘well prepared Jaguar driver’ - I should have paid closer attention to my Boy Scout master when he preached ‘be prepared’!

Somewhat “relieved” to know my car isn’t the only one that has that problem (although I sympathize with your breakdown Mike, not meaning to disparage yours!)
Anyway, as a guy who has been in that situation TWICE in the last three years - I definitely agree that carrying a spare rotor is a priority.
The first time it happened, my spare rotor was in the shed and I had to hike out of the bush dressed in hip waders (must have looked a sight) then get flat bedded back home.
Next time I was prepared when the engine quit at a traffic light and like Mike, small embarrassment factor but speedy remedy. Always carry a spare!

Doesn’t everyone who works on their Jaguar wear a dress shirt, cuff links, and a silk tie (I’m assuming your’s was silk) … I mean it is a JAGUAR

In the almost 30 years I’ve owned my 89 XJ40 it has only failed me twice (yes only TWICE). Both times it was the distributor/rotor !!! Both times I changed both so I don’t know (or really care) which one was the culprit. So don’t dance with the devil and carry spares.

Doesn’t everyone who works on their Jaguar wear a dress shirt, cuff links, and a silk tie

By golly if they don’t they should! Although for safety reasons (OSHA mode on) the tie should be a BOW tie. Anyone else remember when service (gas) station attendants wore ties and a cap? And provided real service? That was before this DIY/pump your own mentality took over. Sigh…

When I was a kid and my dad pulled into a gas (filling) station we were met with a smiling man (yes a real biological man), with a cap!, who not only filled up our gas (fuel) tank, cleaned our windshield, checked the tire pressure, and gave us a plate and some green stamps (which you could redeem for God knows what) all the while smiling, courteous, with no “attitude”, just proud of his job.

For those of you who weren’t fortunate to have lived during that period of time , it actually happened.

Oh by the way dad always filled up with Ethyl !

If you have a crank but no start situation and you ARE seeing about 200-250 rpm on the tachometer whilst cranking replace the ignition rotor with a new or known working unit. The rotors are known to break down (apparently an internal resistor fails).

Weekend followup: Having received a new ignition rotor to carry in my bag of spares I decided to haul out my multimeter and do some testing. This is the new rotor: 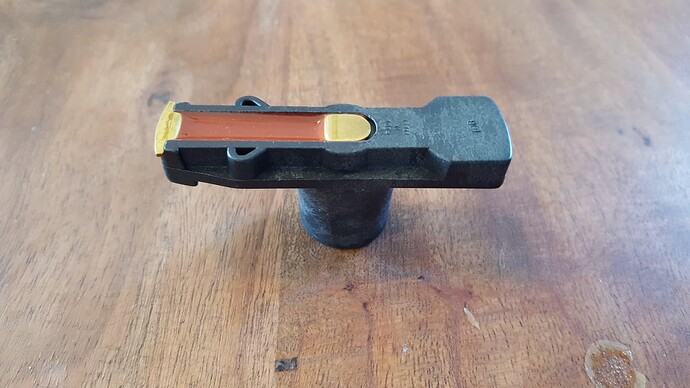 I checked the new rotor for continuity and resistance between the center contact and the tip and had both (0.96). This is the old rotor: 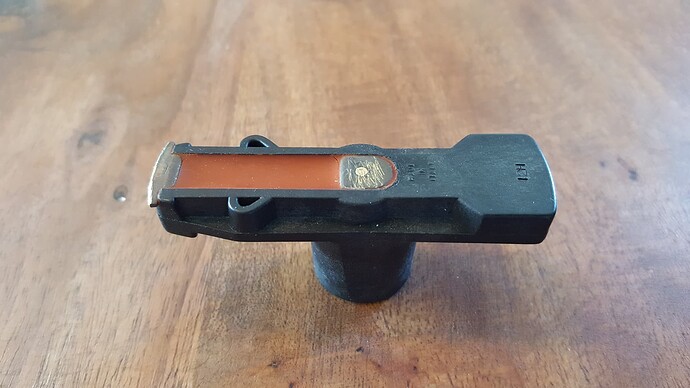 No continuity. As you can see there is a good deal of oxidation of the once-shiny contacts. I used the file blade of my small Swiss army knife to dress the tip of the rotor and the knife blade to remove some of the oxidation from the center contact. 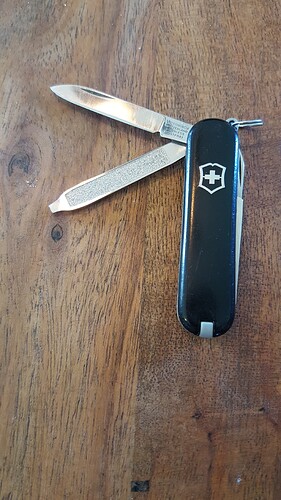 I then had continuity and resistance (1.00). I popped the old rotor into the dizzy and – NO START. (I did also check for continuity between the inside of the rotor and both the center contact and rotor tip and had none.) So my question to you all, my esteemed colleagues, is why does this old rotor not work? As inexpensive as they are I still believe it is best to routinely replace the rotor and to carry a spare but the McGyver in me is curious as to why dressing the old rotor (which one could do in a pinch) did not work.

There may well be a faint carbon track either inside surface or outside surface that is shorting it out at high Vs. 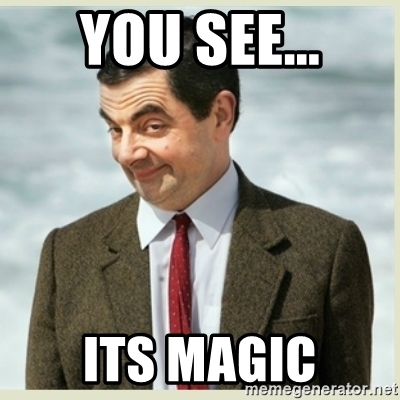 Its shorting HT to ground thru the shaft.

Now that you mention it I recall previous posts about that, and how that could be diagnosed by putting a blob of (non-conductive) grease atop the shaft and refitting the rotor. Would a thin rubber disc (say cut from a tire inner tube) instead of grease provide a fix? Or would the high voltage find a way around? Hmmm…

Just buy two and keep em in the trunk. Problem solved. The damn resistor is just there to deal with radio interference. If you HAVE to make on old one work run a connection from the centre to the tip, by-passing the resistor.

Just buy two and keep em in the trunk.

Larry, I agree (as I stated earlier in this thread) that as inexpensive as rotors are (relatively speaking) replace not jerry-rig is the answer. My wondering about the insulator is about understanding / learning. I know, I know, that’s what books (or the InterWeb) are for.

P.S. Some folks might say I have too much time on my hands!

P.S. Some folks might say I have too much time on my hands!

No, really? Time to take up fishing, buy a boat and create more conundrums lol

Suggestion …heat up old rotor, melt potting compound, dig out resistor/component whateveritis and report back with findings. It’s raining today and the swap meet’s been canceled so a good excuse to get away from watching Sunday TV with the missus and putter about in the garage.