I started out this morning with a simple project, or so I thought. I just bought a 79 Series 2 FHC on Saturday and I noticed the the steering wheel was tilted towards the drivers door. I planned on loosening the two bolts that hold it under the dash and straightening it out. However, what I found out was the the ignition switch metal bracket attached to the right side of the steering column was already tight up against the aftermarket AC and the left side of the AC unit was not level with the rest of the unit because of how tight it was up against the ignition. See Pic below

Additionally the PO butchered the panel by drilling another hole for a momentary switch to replace the horn button on the turn signal because apparently it stopped working. Here is a pic of the switch panel now. 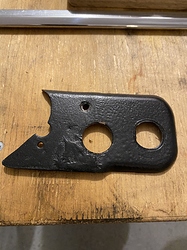 But I have been unable to find a part number or part to replace this panel to hold the ignition. 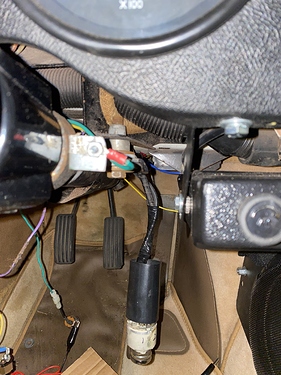 This is a pic of the steering column and metal bracket that held the ignition panel, there is a ground wire attached there temporarily as I was chasing the wiring for the horn button. The control section of the aftermarket AC unit is on the left, now leveled since the ignition panel has been removed, you can see the ignition barrel hanging in this pic.

What I would like to find is this panel. 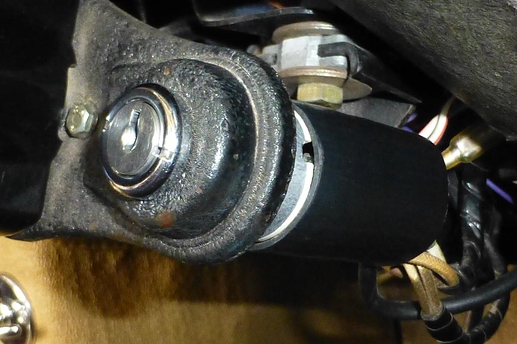 But I can’t find a part number for it either. Any/all assistance will be appreciated.

Thank you. This will definitely help.

Holy crap X 2. It was a total stroke of luck that I came across that part in my searches just yesterday. I wasn’t even looking for anything like that but happened across it and it caught my eye for some reason.

It is now added to my over stuffed shopping cart at SNG. Thanks again!

What I would like to find is this panel. 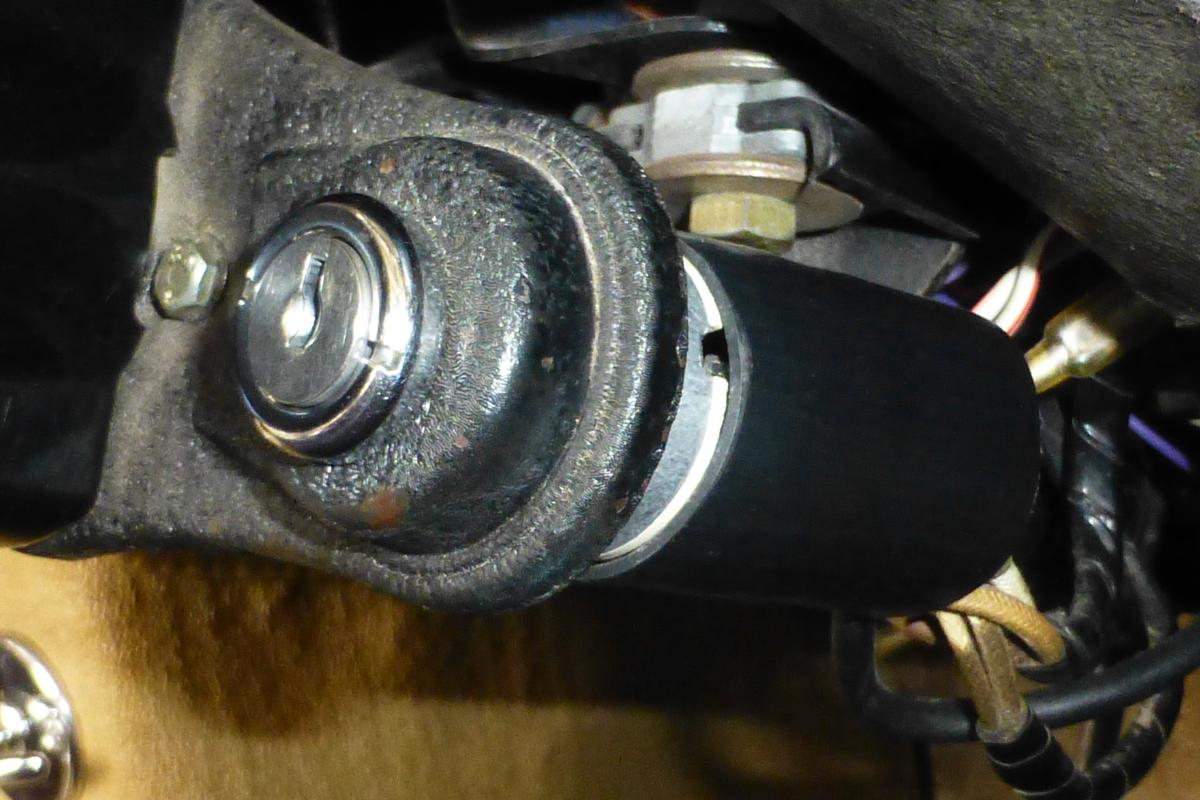 Like a mother who recognizes her own baby’s cry amid all others in the ward… I immediately recognize my ignition switch in that photo. Yeah, I feel like a proud parent.

I see two versions on the SNG page - you might want to confirm the difference. The one in my photo is heavy metal, not plastic – it doesn’t just cover the switch but supports it. Not saying that the lower priced SNG one is plastic but their photo looks like it might be,

I must be blind or search challenged, I can only find this one - 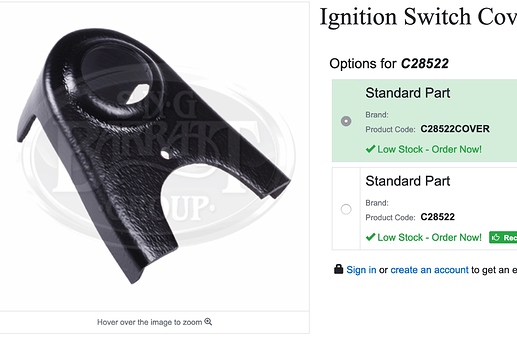 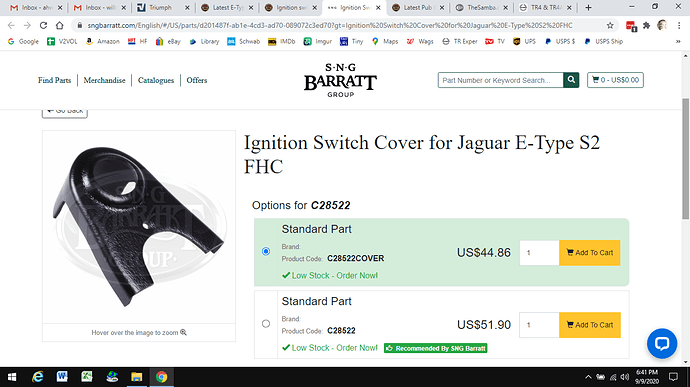 Two versions with the second one being ‘Recommended by SNG Barratt’.

Click on the second choice. Its not a cover, its the ignition barrel.

Unfortunately I suffered through a similar experience with my 1969 Series 2 OTS when I removed my under-dash AC (ugly) unit. Like yours the ignition switch was held on by a flat bracket that was attached to the AC unit with nothing behind it. And just like you I simply could not let that go and wanted it to be “as originally intended”

So I embarked on a three month search for the metal bracket (that is pictured from Geo’s car) but the only thing I found is the same ignition switch cover shown here (sold by XKs Unlimited and SNG Barratt). In a hopeful moment I bought that cover but it turned out to be plastic that was too thin to securely hold the ignition switch as it is only intended to be a cover over the metal bracket. So my search continued. Apparently it’s a bracket that was only installed in a relatively few S2 cars between the time that Jaguar switched from the S1 ignition switch in the center console to one mounted next to the steering column. It was replaced a very short time later with a steering column locking version as required by Federal Regulations.

Parts suppliers I contacted (in the USA, England and even Australia) told me I was searching for a Unicorn. I even sent some pictures of one with a ruler next to it I got from another Jaguar owner he took during his restoration to a friend of mine in the computer industry in the hopes of having a 3-D printing made of it. However, there wasn’t enough detail in the photo to make that possible. (I can try to find those pictures and send them to you if needed)

In the end, my search was rewarded in the sense that I found one in England but it was attached to a steering column and the seller refused to sell it separately. So I ended up buying the entire column just to get that bracket. Certainly one of the more expensive “small parts” I’ve bought for my car…but in a perverse way…one of the more satisfying!
It bolted right in and I installed that plastic cover over the metal bracket as intended.

Don’t give up…I’m sure there is one out there!

If I can help you with any additional information please don’t hesitate to ask.

@NaplesGuy thank you for the story, that helps out. Pressing my luck, but do you have a pic of the part or even the part number?

In the short run, I may be forced to shorten the hacked up part that I showed above my second pic. If I shortened it by 1/4 inch and put a plastic plug in the hole that the PO drilled for the horn button, it would work while I set out on the same quest as you.

Just to confuse you more, this is the way it should look on a '69 with factory A/C: 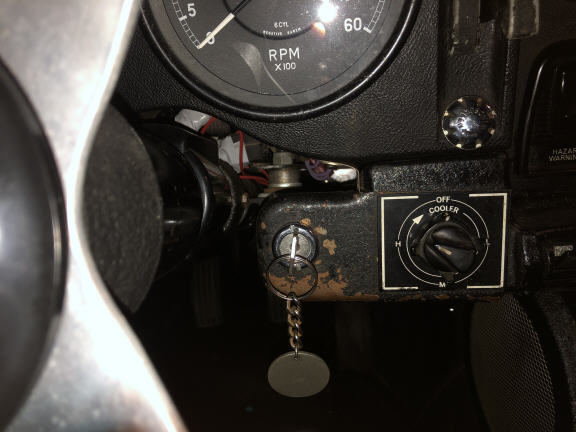 The switch was moved to a plate on the A/C unit. The plate is held down by the nut that holds the A/C switch in place. Since yours is an aftermarket A/C unit, I bet it never ever fit correctly. Your best bet may be to fabricate something yourself.

My uncle has a 68 Series 1.5 with factory air and this is how his looks too.

I may take my Dremel to the already hacked up one to get it to fit until I can either find the factory one or I find a way to fashion one of my own.

More data, but maybe not any information that helps you…

Digging around about this late yesterday I ran across an earlier post. This one describes the ignition column mount for a '68 S1.5, which is basically a collar around the steering column with grub screws to attach -

In reply to a message from NaplesGuy sent Tue 15 Mar 2016: Chet- My early Series 1.5 has the collapsible steering column and and column mounted ignition switch. The ignition switch bracket in my case is NOT brazed to the column, but is held in place with grub screws. I have uploaded a few photos and will post them when approved.– Doug- 1968 Series 1.5 E-Type OTS Denver, CO, United States –Posted using Jag-lovers JagFORUM [forums.jag-lovers.org]– Search the archives & forums - http://…

Here are some pictures of the switch mount in my non-A/C '68 S1.5, which seems to match the above description. It doesn’t seem to accommodate the ignition cover we’ve been discussing, but I can’t say for certain that what I’ve got is factory. Is this setup unique to the S1.5? 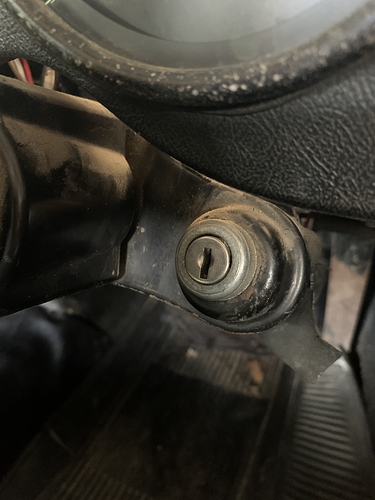 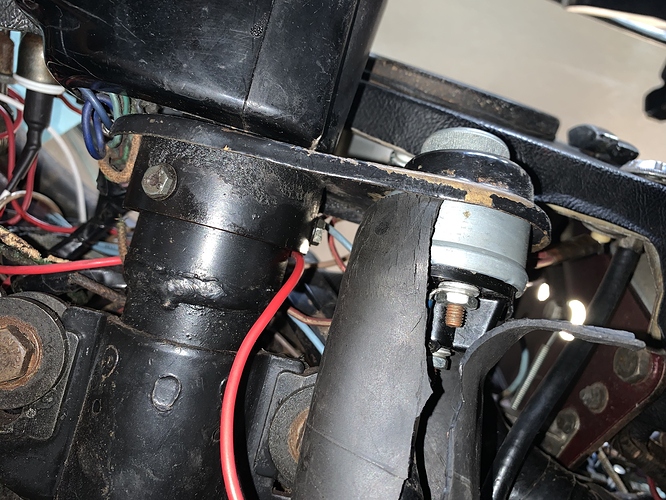 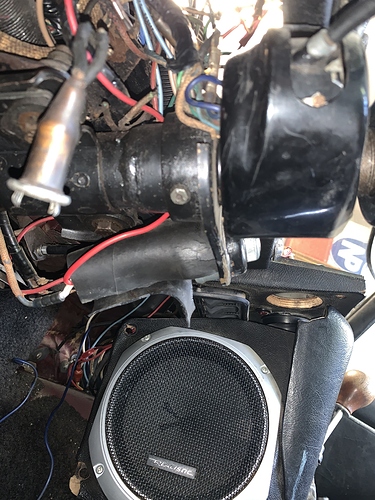 That is helpful thanks. I just wish I could find that part in all of my searching. I can’t even find it on the Moss UK site.

If you read the other posts in the link I just sent, Doug references a part number (C28567) from a '68 IPL, but my Google searches for that number don’t turn anything up.

I will upload the pictures I have of the bracket when I get home tonight.

There’s were 4 or 5 versions during the Series 1 1/2 into series 2
Later was franks picture to a/c
Early a bracket around the column
I used the serie 1 1/2 2+2 metal one and used the STANDARD key swith, eliminated the barrel lock and 15 pounds of junk.

@j_limongelli any chance you could post a picture of your setup?

@ryaskovic It truly seems to be a mystery part. I went back and read the entire thread, its good to know I’m not crazy and that others are searching for it to, although disappointing that it hasn’t been located yet.