I'm sure this will bring discussion 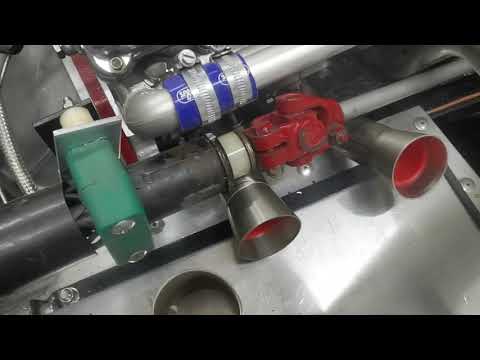 Very nicely done, brilliant actually!
Don’t know how long the copper will stay nice and shiny, but looks good.
Also love the fact that it’s made from out-of-the-shelf plumbing parts and pieces.
Did I say brilliant?

I’m sure it is the only copperised v12 HE engine for a reason - it will presumably tarnish and acquire a lovely patina.

The Emerald setup didn’t mention a cam sensor, so I presume it’ll have to run only semi-sequentially or batch fired as I don’t think their setups handle a native 12 cylinder operation.

Opening up the central water jacket ports may be a mistake. Norman Lutz did the exact opposite to force water flow through to the back of the heads, whereas here much of the water will go out of the heads before it reaches the back of the engine. That may give you relatively low water pressure at the back of the engine. This may not be an issue with an electric pump - if it is programmed to run faster at low rpm - we know the Achilles heel of the stock cooling system is it’s low airflow and low waterflow at idle rpm.

The v12 engine does wag from side to side as the equal and opposite effect of torque pushes the crank and flywheel round. The exhausts on the v12 have always been taken out close to the block and so having them come out horizontally and high up through the bodywork will mean some big holes will be needed to stop it bumping the engine cowl and blistering the paint. They obviously have to miss the steering column as the engine moves under load…

I hope the alternator doesn’t get too warm. Jaguar did have an aircon compressor in this position, but that had air/refrigerant pumped through it. This setup has the alternator sitting right behind the header tank.

(Roger Bywater has a brass plus torque inlet on his website btw.)

Custom fabrication is very hard work. I hope it all works as advertised.