Inside a TPS Im troubleshooting

This is what is inside a TPS. I have a miss/stutter at 2100 RPM and have replaced the the CPS and currently working on the TPS as the problem. 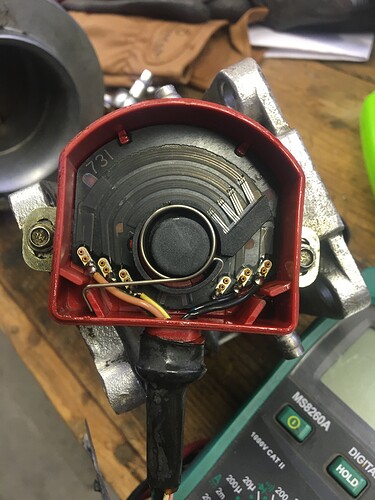 Not sure if its the angle of the photo but the outside tracks look quite worn.

I take it that’s the newer red one rather than the earlier Bournes pot?

The typical problem with these things is that a high percentage of driving time is spent at exactly the same throttle position, the one that corresponds with 70 MPH on the freeway. That particular spot on the tracks gets worn through. And then, of course, it’s at that particular throttle where the engine doesn’t run wuf a chit because the ECU is getting flaky throttle readings.

Some time back we discussed replacing this pot with a Hall effect sensor. IIRC, some people had done it with success, although it took some fiddling. Never have to worry about worn tracks again, though.

Yes, looks like these white lines is the carbon coating that’s completely worn and missing.
You could solder some wider silver or copper tabs under the arms so that they contact the intact part of the tracks, but a fiddly and questionable repair.

I’m only familiar with the black Bournes TPS functions, and successfully repaired mine that way, but A 180° Hall effect sensor as Kirby suggests would be the way I would go next time.

Thanks for your wisdom on this.
This potentiometer also is tied to the transmission in my 94 4.0 AJ6. That complicates things. Ive been working with this 94 XJS 4.0 with AJ6 engine since September. The only sensors not replaced are the O2 sensor and the exhaust/EGR temp under the intake manifold and the TPS. Been thru the engine harness, ECU, fuel pump and a host of other small stuff. I would love to find a new old stock TPS but currently scrounging for good used ones. I did find a 6 wire with the round plug I’m still waiting for.

Gee, how is it different? Isn’t that the same engine?

A cylindrical 6 wire blue plug vs a rectangular 6 wire black plug is the difference. And you can still buy new ones. I have one coming and Im going to see if I can change the plug.

Does it send a signal to the transmission? That may be the difference. Are the part numbers for things it connects to, like the ECU, the same or different?

It does send signals to the transmission too. The “body” looks the same.

The “body” looks the same. 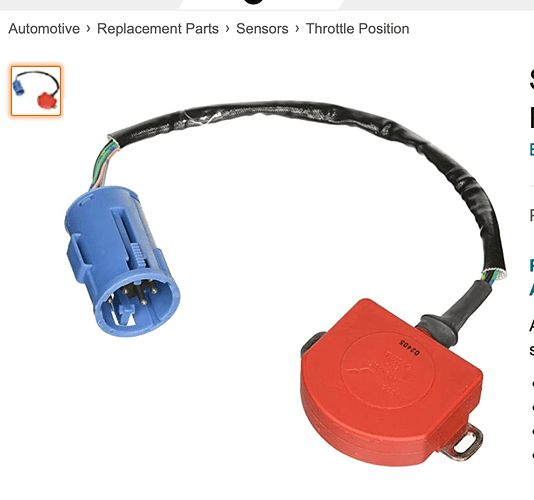 The only way currently to get a new DBC2626 w/o spending a fortune.

Yes, the swapping the plug works. Here is a picture of my attempt at doing so:

Were the wires the same colors as the original? That would make it it a whole lost simpler.

Were the wires the same colors as the original?

The TH 413 TPS plug swap worked fine. Turns out it probably was not the problem. I ended up accessing the fuel pump and found the return line completely collapsed and a small tear in the feed line. Did not change the hoses in the tank 6 months ago when I first started working on the car. I also found the o-ring on the check valve torn. removed it and installed an inline check valve in fuel supply line.