My 65 roadster would not start so I put a charger on it that has a instant start setting. When I put it on the wire to the alternate fried and now the gas and water temp gauges will not work. Any thoughts on why the gauges will not work? Thanks for any input

Is that the one on the back of dash door? 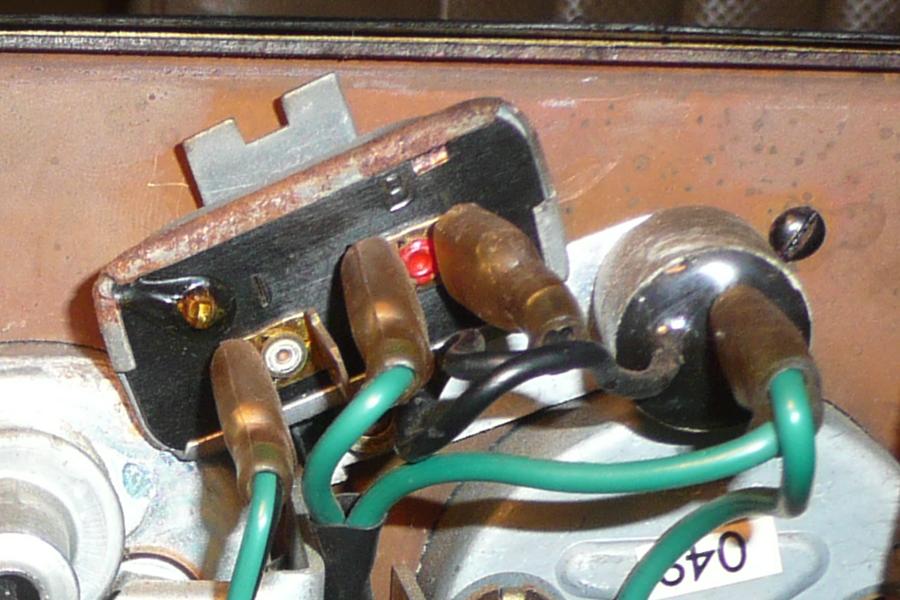 Some replacements are solid state which may be more vulnerable to spikes.

I had put in a solid state one so maybe you are correct and I blew that one. Thanks for your reply

It seems to me that the burning up of the alternator wire is an indication that the jump charger was hooked up in reverse polarity. Any other non protected solid state device could also have been destroyed.
Tom

I guess it could be, it was outside it a rainstorm while trying to get my freshly painted car off the trailer (nightmare)

That kind of heat has been known to burn a car to the ground. Sounds like you may have gotten off easy with the instrument voltage regulator and may be some alternator diodes.
Tom

I don’t think the polarity was reversed but I guess it’s possible. I put the original regulator back on and the temperature gauge works put the fuel gauge moves very slowly and seems to be registering very low almost nothing on A half full gas tank. Is it possible that the actual fuel gauge was affected? Or maybe the original regulator isn’t good either. I also noticed that the ground wire to the alternator is getting hot when the engine is running

I’m beginning to think that there is something we don’t know about your car - ie something non-stock that could be unknown to us. As far as I know, the stock alternator is grounded through its mechanical connection to the engine - there is no separate ground wire. If you have a separate ground wire, it begs several questions:

Fried or hot wires says something is taking more current than it should. I think resolving this is the first priority, rather than the gauges.

In addition to David’s excellent. points I would just like to add that I did once try to jump start our ex 1966 (registered as a ´67) 4.2L 2+2 with reversed polarity, but did not blow anything. (Only I got scared of the sparks flying).

Once polarity was correct everything worked again, but that car was completely stock, not even a relay for the headlamps nor fan & otter switch yet then (I added those later after I had burnt a switch). Lucas AC11 alternator etc all original components, except the gearbox and O/D + solenoid (car was originally automatic).

The only piece of wiring I replaced with a new item (from Autosparks UK) on that car when I did the restoration was the alternator harness as the wires looked beaten to me and I knew there’d be some serious current in those. And of course the grounding strap between the body and engine, which is a typical.

Also if your Series 1 (your profile says 1967 OTS but you wrote it’s a 1965 4.2L?, Another car?) has had any problems starting or getting the starter going upon first push of the button, please also check the ammeter terminals behind the dash. On mine one was a bit loose, which had caused many “mystical” starting problems. I figured it out once when she would not roll the starter, before I pushed the instrument panel a bit harder. That made me curious and once I flipped the panel open it was easy to see that one terminal on the ammeter could be jiggled a bit. Opened and cleaned it with a connector cleaning spray and put back tight and the problem never came back.

I hope it’s something simple!

It is a 67OTS. Most everything is stocked on the car except it has a mini starter. I believe that the alternator is factory. I will include a picture to show you which wire it is that’s getting hot. You can kind of see it’s the black one that looks a little fried near the alternator. 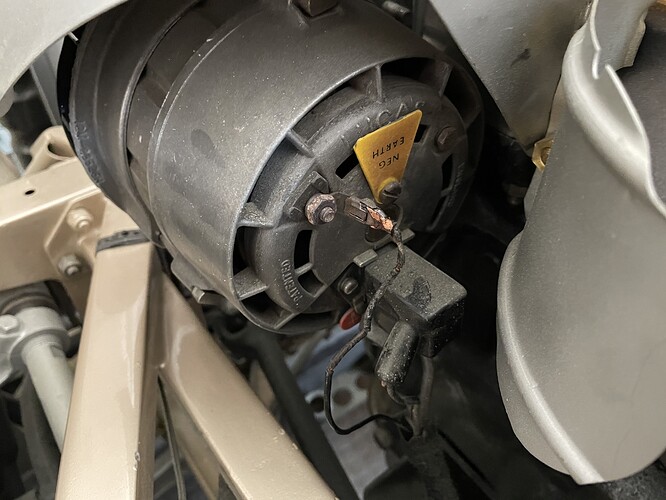 Just as a start: Rotate the ring terminal so that it’s centered on the insulator, not grounded to the case. Re terminate with an insulated connector. Replace the wire, since it’s cracked and bare in places. 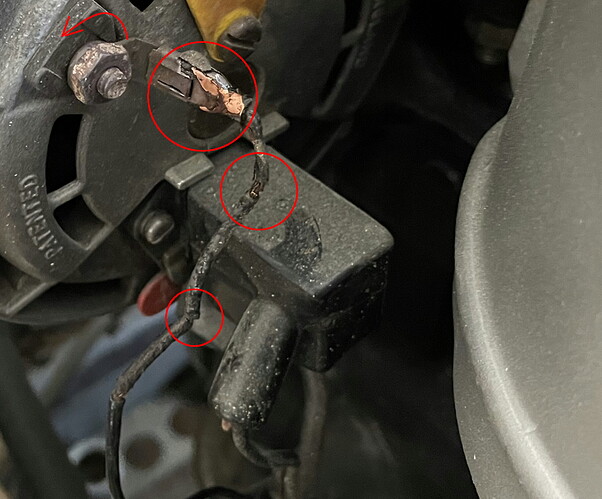 Will do thanks. Hopefully that helps

Just like Mike said, to me it looks that it might have grounded, which would create a short when ignition is on. Also mine was original, but had lot the “NEG. EARTH” reminder or then mine never had it there (but of course had the one on top of the heater), and mine also (being a ´66) only had the top shield for the alternator, not one like that on the exhaust manifold.

Back then (in 1997 I think) the alternator harness I bought from Autosparks UK had all the correct connectors and wire colours so I was very happy with it. That was the only wiring harness I replaced in that car and did not have other electrical problems, except the mentioned headlamp switch (H4’s so I added a relay) and otter switch (added a relay) during the 16+ years and over 40.000 miles.

On my XJ6C from 1975 I replaced in addition to the alternator harness also the complete engine harness, bought from the same company, as it looked very beaten. IMO the most important wiring is the alternator as it carries a lot of current, and in the older than 1968 cars also the ammeter wiring is something to look at, as it too carries the whole current going to / from the battery.

The “Neg Earth” label actually wasn’t there for owners or mechanics. It was there for the original installers. The 11AC system, believe it or not, was designed to work for either positive or negative ground. Aston, for example, used exactly the same system in positive ground configuration. Polarity can be reversed by swapping the diode bridge, or in the aftermarket, by switching around the positive and negative diodes. All the external components: 3AW, 4TR, gauges, are either polarity insensitive or have isolated connections. Clever, right?

Charles, based on your photo, I now doubt you hooked up your jumper reverse polarity. When you said the alternator wire burnt, I wrongly assumed you meant the heavy wire. To me, the alternator wire is the bat wire, and I call the other wires by their function, field and AL wires. It looks like your AL wire burnt. My poor assumption.
I do wonder what caused the AL wire to look as it does. Is it just old broken insulation, or was it over heated. It is not what I would call burnt.
Tom

First of all, I want to thank you guys for all your thoughtful and extensive replies. The AL wire definitely burned, and smoked etc. I put it in the Correct position on the alternator so that it does not ground out to the body of the alternator again. I will also put in a new piece of wire starting with the wire is not burned and fragile

I put a factory gauge regulator and the temperature gauge works but not the gas gauge… it moves a little but does not read correctly. Could The gauge or sending unit have been damaged?

Yes, it could be the sending unit. I have extracted and repaired mine twice. The first time the gauge registered near empty even when the tank was full. Turned out the float had a leak in it, fixed by using a soldering iron to melt the solder at one end to get the gasoline out then resoldering it closed. The fix lasted a few months then the same symptom. Removed it again, but this time the float was empty. Removed the cover on the unit to find a groove worn through the rheostat mechanism, which is really a crude needle on foil device. I soldered in a new strip of copper foil directly on top of the old and the gauge has been working perfectly since, now several years.