While I have intake manifolds off, is it worth grinding/polishing imperfections and rough areas at the ends where fuel enters?

In photo, one port has a 1/8" “wart” right next to injector hole (at 11 o’clock). Looks like a drop of aluminum from casting or welding?

Will this help fuel/air mixture at all?

(I don’t care about actual porting/polishing, just the odd welding imperfections sticking out like a sore thumb ) 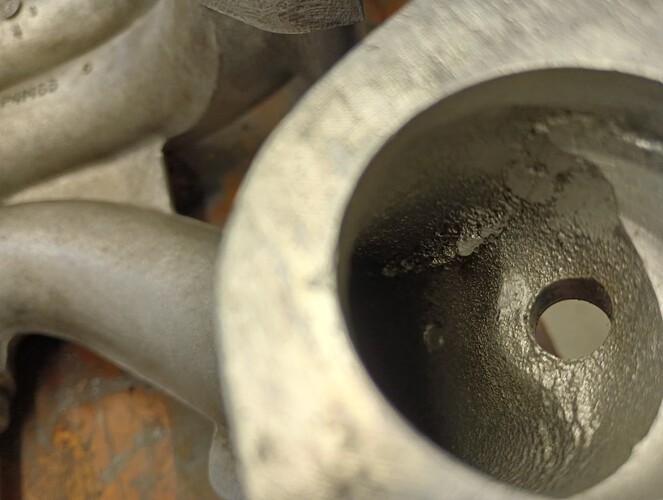 I went ahead and filed down the welding leftover bits, can’t hurt. Only #1 cylinders on both manifolds had anything sticking out.

I noticed the walls between fuel injector hole and face to head were a bit smoothed out at factory. (End bits welded on?) So once fuel and air mix, a bit of smoothness is good?

How about these little grooved holes? Should they be filled up?

I know I’m probably getting into what to do for racing engines, and it makes no difference to me, and i have time on my hands. More of a curiosity, as i hope to not have manifolds off again for a long time. 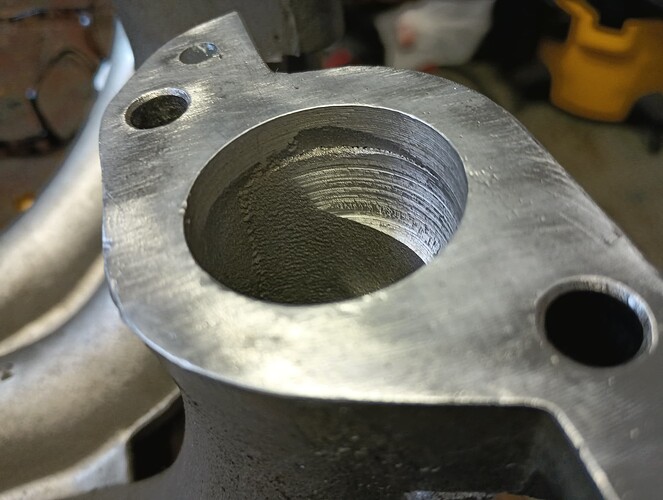 Unless you run a race car, I doubt it really matters that much.

With a relatively flat torque curve and maximum power higher up around 4-4500rpm, these engine are geared to run at much lower revs than that during normal day to day running. That means you can always have more street performance just by putting your foot down. If you actually get to 4500rpm, you may find a bigger worry is how long you can keep your licence.

Thanks. That totally makes sense.

I’m not thinking about high flow air speed though.
I’m wondering at low rpm or even idle, is the air/fuel flow not a nice constant because of those groove/holes? Can fuel get stuck in there for a split second? Fuel is injected out sometimes when intake valve is closed, so no air flow.

Sadly there is much imperfection in the system, but overall it doesn’t really affect the result. Put 12 fuel injectors in a line and they don’t all flow the same amount of petrol given the same injection time. The inlet runners are different lengths, so the air pressure and air velocity aren’t all identical. The cylinders aren’t the same cc as each other. It’s batch fired in four groups of three, so only four cylinders are getting fuel at the optimal time anyway. You’d bet the valve timing on all twelve cylinders isn’t the same… This list goes on and on. With a distributor, you can’t really even guarantee that some cylinders aren’t sparked earlier or later than others by the rotor.

Air flow is never constant anyway, even if rpm appears to be. What is happening is a column of air starts moving into the cylinder when the inlet valve opens, it then accelerates, then it abruptly has the door slammed in its face as the valve shuts. That’s happening for all 12 cylinders and so air and atomised fuel is left bouncing around.

It’s a better system than a carburettor where fuel was delivered a long way from where it was needed and so was continuously condensing onto the manifold walls as other fuel was vapourised off of them, but you simply aren’t being given the tools to even measure let alone trim out every imperfection on a batch fired engine of this vintage.

You’re really asking a complicated fluid dynamics question and I suspect at some revs, wall imperfection is an asset in creating turbulence to help mix air and fuel, whilst at other revs, other interactions detract. Overall, there is lots you’d need to monitor to separate out what might be the most beneficial change you’d want to make and the specific feedback you need just isn’t there.

Takes me back to “port and relieve” days on a flat head Ford V8. Smooth and shiny intake and exhaust ports? or granular as cast intake. never settled as to whch was the best.

for the street. match the opeings head to intake. Same fr exhast.

As to the intake, Reve warts. OK. granular minor imperfectons might be a god thing. turbulence to keep the mix atomzed.

Way back, I prted the B& S one lung engine I installed onsons Go cart. Ugh, too fast. richened the mixture to cut power and speeed.

Many ideas in this area

Thanks for the replies, guys. Like I said, more of a curiosity, and what you both say is very interesting.

I will leave them alone. I removed the two ‘warts’ just to give me something to do, and to feel like I ‘improved’ something.

As Marek said, eloquently, doing porting/polishing on a street engine is an exercise in futility, and you will not notice any difference.