is it possible to install all the components into the irs cage—backwards? The reason I ask is that I’m trying to remove the shocks while the IRS is in the car. The front rears are a piece of cake as we know. the rear ones not so much. I have a friend who has removed the upper bolt nut for the rear shock by reaching up with his hand and replacing the nut. I cannot even get close to mine, which makes me wonder if the cage was installed backwards. IF that is possible, what are the odds of it contacting the body when going over washboard-type ruts/bumps?
thanks tom

I can’t see how. Some things would likely bolt up fine, but I don’t think there is any way to attach the peripheral stuff like handbrake bracket right?

My upper shock bolts are installed with the nuts on the inside. It makes it way easier. In that manner a properly configured socket only needs to be snuck up behind the cage to hold the bolt while removing the nut. If you’re careful tapping the bolt back IIRC correctly it’s not necessary to get your hand up to replace the bolt for reassembly. As it is, you likely just need to find someone with small hands. Any children for rent near you?

Which way did you put in the rear shocker bolts?
They need to go in from inside to outside with the nut outside the cage. The nut is usually tricky to get a spanner on.
If you have the bolts the wrong way around you will not be able to get them out as there is not enough room

I cannot even get close to mine, which makes me wonder if the cage was installed backwards. IF that is possible,

I don’t think it’s possible to put the cage in reversed. It’s easy to check though. Look at the front Metalastic mount on either side. The most forward bolt goes through a hole in a metal tab that is welded to the cage. That tab does not exist on the back side of the cage. See below picture, arrow points to tab on the front of the cage. 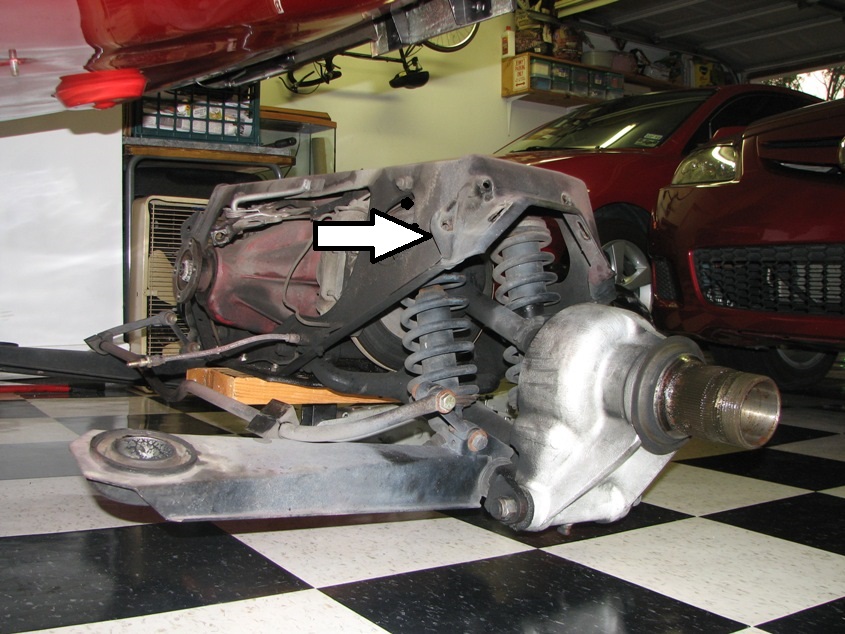 I believe the cage itself is symmetrical front to back - that is, it begins life able to be finished either way, then bits are added (such as the captive plate for the handbrake bracket that Erica mentions) as it is prepared (and are not easily reversible).

Not sure n this—if you look at the lines on either side, the lines sit out further on one side and this is the side that I think should face forward. The other lines don’t sit out so far and that is why some have been able to get a hand up in there. I cannot.

However there are only captive nuts for the handbrake at the front and the flanges mentioned above are only on the front.

ome have been able to get a hand up in there. I cannot.

I can’t get a hand in there on my S1 coupe in the garage. I can get a ring spanner on the nut though. I think this is normal. I can’t comment on other series cars, nor on 2+2s. They might have more room.

to get a wrench up there it would need to be long and curved. then once the nut is off not sure how you would ever get it started when trying to put it back on.

what is that from–it looks nothing like mine. I have the mertalastic hangers that go on the car first them raise the cage till the bolts on the bottom of the hangers pass thru the slots on the cage.

what is that from–it looks nothing like mine. I have the mertalastic hangers that go on the car first them raise the cage till the bolts on the bottom of the hangers pass thru the slots on the cage.

Here is a picture of the diff cage from my FHC, 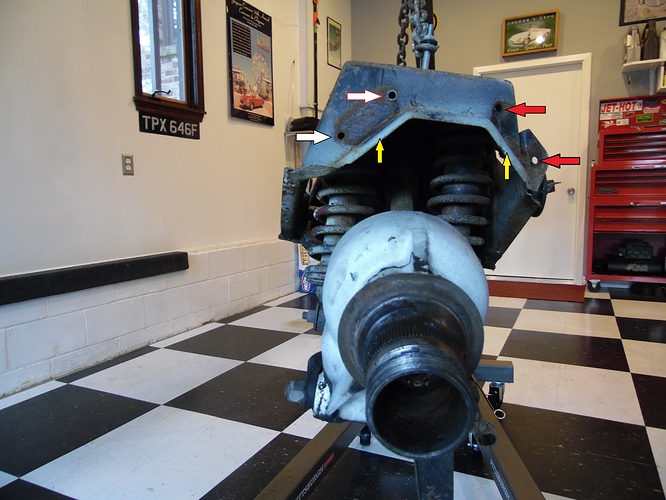 This is on a Series II. Are Series I cages different?

This is on a Series II. Are Series I cages different?

The part numbers for the cage (cross-member in Jaguar terminology) is different for the Series 2 from that of the Series 1 (3.8 and 4.2 use the same part). However, the welded on ear for the front mount appears to be a feature common to both parts, judging by this illustration from the Parts Book for the 4.2 Series 1: 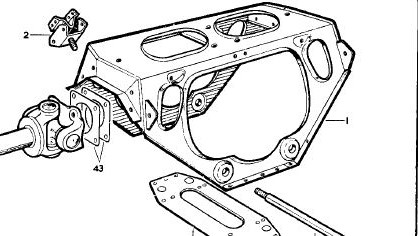 I confess to being surprised at how asymmetrical the cross-member actually is. When I was working with it day after day I don’t think I noticed it that much. I always looked for the captive nuts for the handbrake linkage to determine front from back when I had it disassembled…

Yes it’s not easy. I tape the nut onto a spanner.

That’s how I determined it as well. Yet there is an identical set of slotted holes, but not the captive nuts on the back side. I’ve no idea why they are there. 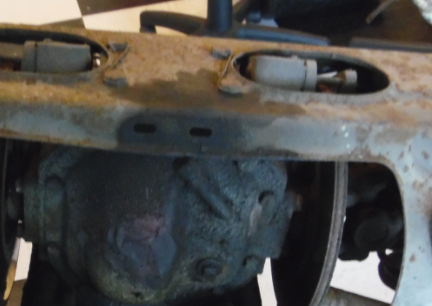