Is the XJ the cool, affordable vintage car? 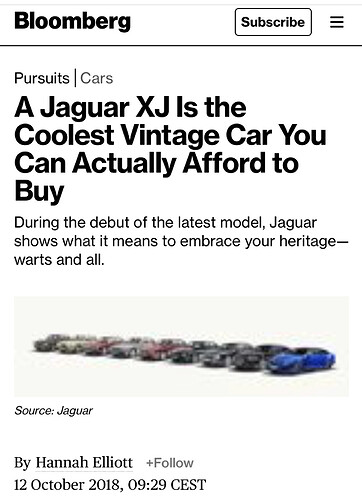 affordable is very subjective, as is driving with the prince of darkness as your co-pilot

It’s a very negative article isn’t it. A well sorted XJ is dependable.

I’m particularly fond of the Series III cars, which I describe as “the most modern of all antique automobiles”

It’s a very negative article isn’t it. A well sorted XJ is dependable

I think it’s a bit like the Top Gear XJS episode or the Finnish tests originally on the XJ6, 1969 and again in 1979, they found concerns and problems but they also found almost unspeakable joy in driving one.

Like one of my friends said about a fellow driving a Toyota that never had any mechanical or electric problems: ”Oh yeah, but where’s the fun in that?”

And rust, obviously, a constant battle that rages on.

I‘m in Austria now and was in Switzerland last week, a few drips of oil (that are mostly my fault as far as I see it) and a slightly blocked tank vent are the only issues I have. I trust the car. Zero electrical issues, the later series cars do have their problems but all of that is both age related and fixable, leaves you with a cool, affordable and good vintage car.

Apart from things I caused by neglect or stupidity it actually, also given its age, has a great track record so far! Do you have a link to the finnish tests?

“Affordable:” an ENTIRE thread there, boy!

I’m more and more tempted to get another Series III (XJ12 would be nice) that’s not as nice as my current one to use as a daily driver. But I’d probably need to sell something first to make room. As much fun as the XJS is, an XJ6/12 is just easier to drive (and get in and out of).

Yeah. I’ve done trips over 4000km in mine, with multiple occupants. Doesn’t let me down. Neither do the others for that matter.

Do you have a link to the finnish tests?

No links, I don’t think they have ever been digitized or translated, the 1970 test should be copyright free, but how many here can read Finnish?

Ps.But for fun, I will look them up.

Translate it I can! Cheers!