Is this tan? it looks darker? 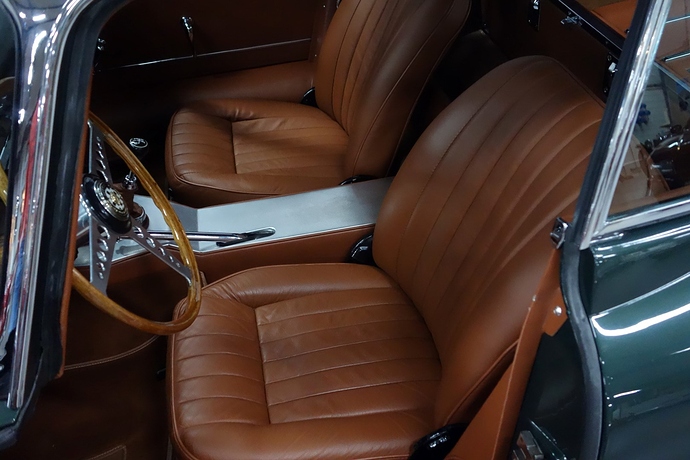 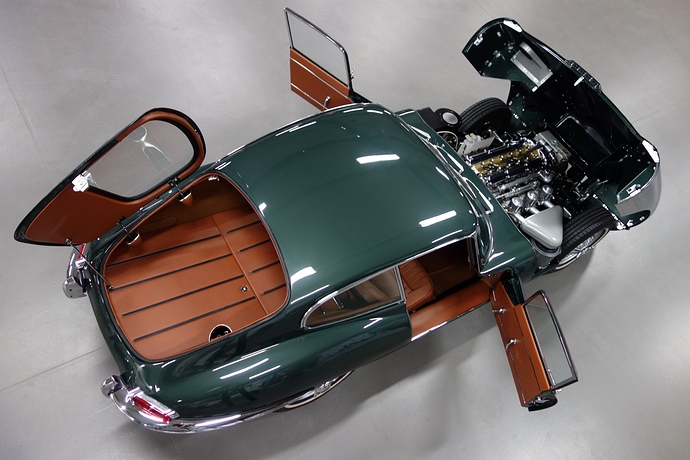 I don’t believe it is tan.

I think it is Tan, as opposed to Light Tan. There us also Cinnamon which seems to be a hybrid of the two. Mine is Cinnamon and the hides and vinyl are a light tan and the carpets darker. These are the only 3 trim colors I know of in the brownish/tan spectrum.

I agree, think it’s tan. Tan is the darkest brown of the colours in that spectrum (light tan, biscuit, cinnamon) and is described often as pigskin or the colour of an American football.

Ah, so light tan is even lighter than biscuit. Is there a Sable or is that towards white?

Ive been trying to figure its name for a long time. I’ve ordered samples from everywhere.
I even sent pictures. It might just be custom? Tan is the closest. It for sure is not cinnamon, light tan or tobacco, at least any samples I received, tobacco was from World upholstery, but too red… 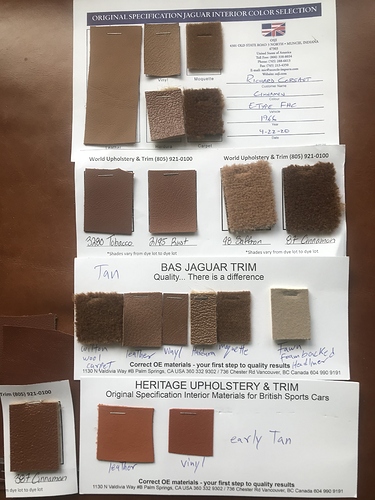 Where is the top swatch from? That looks very close to my Cinnamon, and I need some replacement vinyl.

Could you get more foot stools like that and skin them?

Maybe send that link to the sales reps and ask them what they think. I agree it seems darker than anything I’ve seen.

Tan is a bit darker than cinnamon I believe; see samples in this thread:

I’ve been trying to do some research on factory tan and like colours. I found references to Biscuit, Beige, Tan and Cinnamon in various E-Type factory colour charts on google. Has anyone seen these colours side by side when new? I’m sure if still original, 40+ years on everything probably looks washed out. Most upholstery shops that sell interior kits only list Biscuit. I’ve looked at photos on XKEData of these different colours but on the computer they all look the same. What do you guys kno…

Also, is there a 3-letter trim code on E-types? BTW, your beautiful car features a new-looking interior. Are you sure that it is the original trim colour? And there seem to be two cinnamons in your sample…the one lower left looks closer to your car and your footstool? I’m unsure as to what I’m looking at in that sample collection, though.

Its from OSJI Muncie Indiana.
Yes I sent them pictures, no luck. Even Suffolk & Turley in england.

Yes its from Suffolk & Turley (England) called dark tan, its redder than the picture, agree its fairly close. I even emailed the shop in Europe who sold this car, he said he would try and contact the owner. I never had a reply. Its probably a custom color.

Ah, so light tan is even lighter than biscuit. Is there a Sable or is that towards white?

Nope, that actually looks more like “Light Tan”, but it could be “Tan” as that is bright studio lighting and that can really light up the colour. I bet it would different outside in the shade, and I mean much darker and less saturated.

The only standard colour Jaguar had that was lighter than Biscuit was Beige (Connolly VM.3234. (And they made a few cars for special order with white interiors, called either “Ivory”, “Cream” or just “White”. Jaguar “Beige” Connolly VM.3234 is actually really light, take a look at #885005: http://www.xkedata.com/gallery/zoom/?id=19637

Maybe I will try to look up a posting with the 1960’s original Jaguar leather colour options.

The mistake people do, is that they think "Tan " is light and “Light Tan” is even lighter.

It is lighter than “Tan” but Connolly VM.3104 that Jaguar called “Light Tan”, is a very rich saturated lovely colour, now becoming very, very rare. It was popular with “Golden Sand” paint and a few other colours.

Italians (Ferrari and Maserati) called the same Connolly VM.3104 " “Zucca” / “Arancio” / “Marrone” which would translate to “Amber” or “Orange”, “Tangerine” or “Chestnut”, so yes, in most eyes it is a rich and saturated brown.

“Tan” is a long story in itself, that tone used to be available with a certain grain called “Pigskin Grain” and thus the whole name was “Pigskin Grain Tan” but is was also named by Jaguar (on JHT certificates) as “Pigskin” or “Tan” and once it was only available in “Luxan Grain” or “Crushed Grain” from Connolly Jaguar stopped calling it “Pigskin” and instead they called it “Tan” and it was a very popular choice for Black and Dark Green cars (1952-1968) and looks fantastic on both IMHO.

Jaguar’s “Tan” Connolly VM.3280 is a rich brown, looks very much like the American football.

I have seen far too many cars that claim to have “original interior colour” and call is “Tan” or “Light Tan” when they apparently have what someone somewhere called “tan” and that looks more like what Jaguar called “Biscuit” or “Cinnamon”.

Unfortunately I don’t have a Connolly sample of “Biscuit” so I am unsure about the Connolly colour code for it. The others are guaranteed as I have the factory sample booklets for those colours used in the 1950´s and 1960´s.

I suspect Jaguar’s “Biscuit” could be Connolly VM.3218 or VM.3100 both of which were called either “Beige” or “Naturale” by Ferrari and Pininfarina, but as I don’t have an original sample with the code on the back I can’t know it for sure. If someone has an original sample it would great to know what Connolly code it is?

Ive been trying to figure its name for a long time. I’ve ordered samples from everywhere.
I even sent pictures. It might just be custom? Tan is the closest. It for sure is not cinnamon, light tan or tobacco, at least any samples I received, tobacco was from World upholstery, but too red…

Jaguar never (at least not in the 1950’s nor 1960’s, I am not so interested in their marketing after ca 1978 although I do have dozens of original colour charts) called any interior or leather colour “Tobacco”.

Today many people would call Jaguar “Tan” for “Tobacco” or “Cognac” etc. and they might call Jaguar “Light Tan” for “Amber” or “Tangerine”.

You have to understand that BAS US/UK/Canada, OSJI, Suffolk & Turley, MCT etc. they all sell what they can get and what they think is the best substitute and sometimes it is ok, thank God we now can again get the right kind of Connolly VM.3171 “Red” as for years and years all the substitutes were off by a mile. We can thank the Italians for it, as so many classic Ferraris and Maseratis used VM.3171 “Rosso” aka “Red” that someone had to start remaking correct looking leather, which is a bit more expensive but looks just like it should.

If someone has more original samples or knows some more Connolly codes for the missing interior colours I sure would be glad to hear about them. I do have those samples as well, but they are glued to cardboard and probably also too small to have the Connolly codes visible on the back! 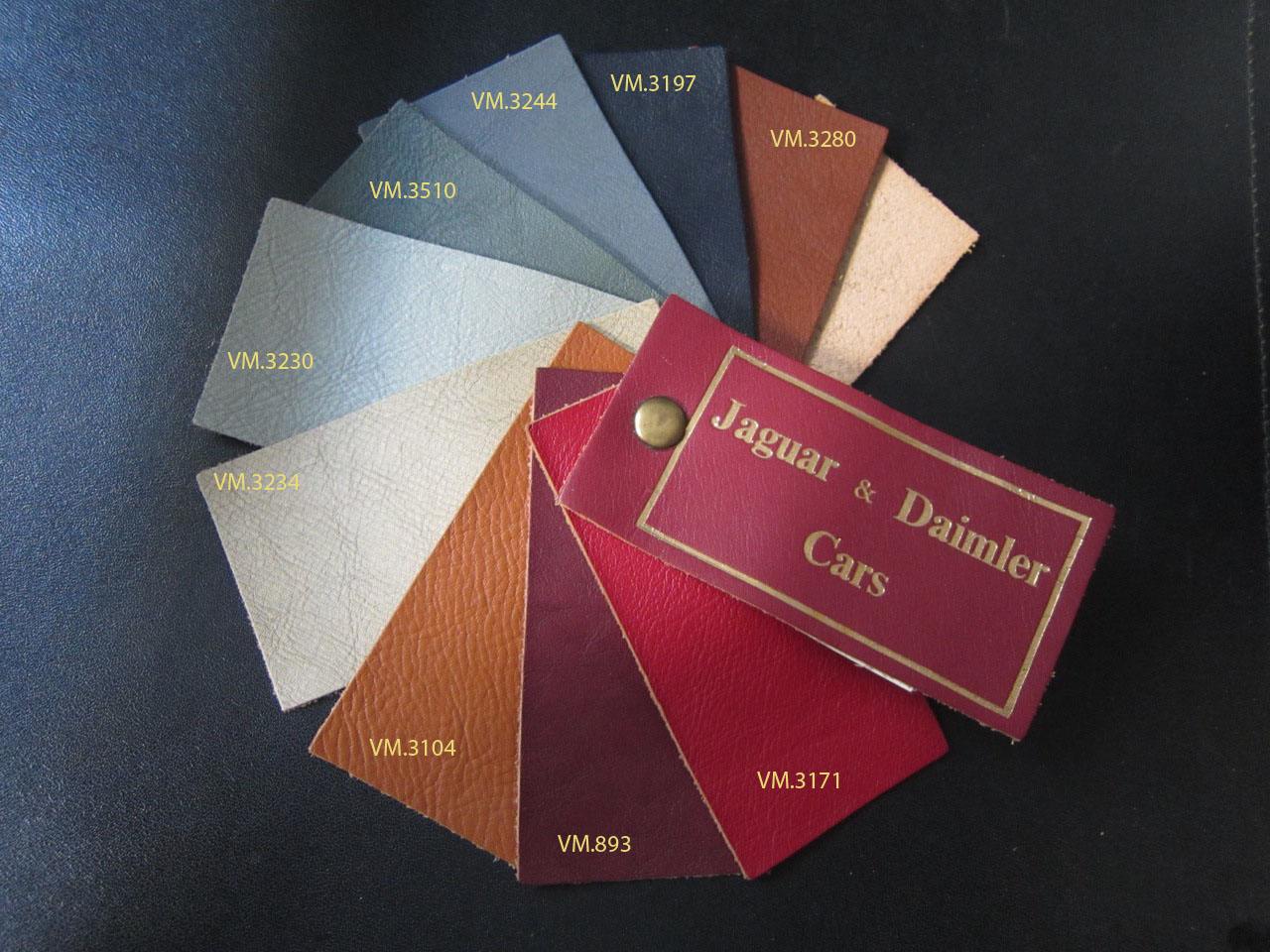 This is also a pretty good source:

Jaguar called it “Beige” and it is very light in both tone an hue. (Much lighter than that sample would indicate, again take a look at #885005.)

VM.3230 is missing from there, that’s what Jaguar called “Grey” and very grey it is.
Also VM.3197 is missing on that site, that is what Jaguar called “Dark Blue” and it is so dark, that on closed cars people always seem to think that the interior is black, as it is so dark that unless you open a door and there is bright light you can’t really see that it’s actually blue. (I have that in our Silver 1975 XJ6C)

Those missing and also Jaguar “Tan” Connolly VM.3280 missing there makes me think that you could not get those either as they are not being remanufactured.

But this one: Colour: Vaumol Ochre
Code: VM3104

Is being made so I take it that that might be what you have, it is lovely and it is what Jaguar back in the day called “Light Tan”.

I KNEW you’d have the skinny!

This is my Mk2, I think you have the same colour interior. My upholstery is original 1963. Your car looks great. Paul. 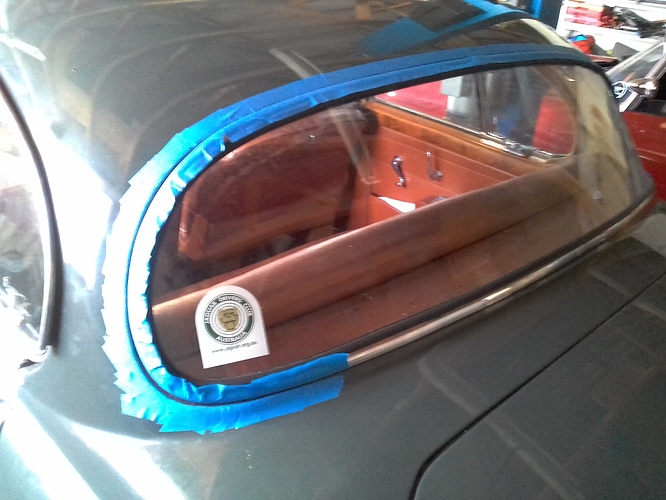 Very cool, that sure looks like Jaguar ”Tan”. What’s the original combo, ie what was/is the paint?

It’s not mine, I’m hoping to recreate it. Mine is opalescent green, really struggling with the interior! Colour is off from factory also.
Thanks you guys have helped with further investigation. Lol

Hi Pekka, it does say “Tan” on the Heritage Certificate. The exterior is Sherwood Green, there have been some repairs but mostly original. Tape for managing my window resealing efforts! Paul.