I’ve read all the pertinent threads both here and on the UK forum and I still can’t see the necessity of the J17 rear crank seal sizing tool. It seems to me the crank itself can perform the same functions i.e. centralizing the seal and establishing it’s final diameter.

I would first use the procedure in this video for pre-forming the seal and rolling it into the cover grooves. 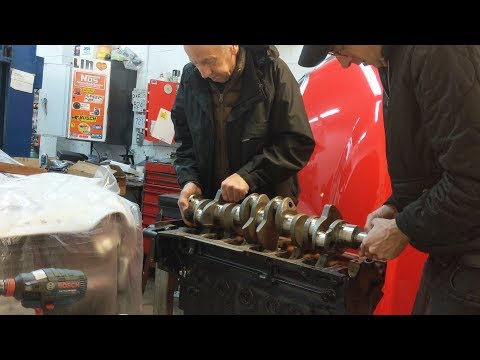 Next, I would lower the crank into place (with upper shells installed) and let the scroll area rest on the upper seal. Then use the crank’s weight to further form the upper seal. And then add more pressure. After a bit, install the lower seal and progressively compress the two. If the ropes are too long, perhaps trim as required, leaving maybe .020 proud.

I can’t see any downside to this approach for DIY except that using the scroll surface for forming might chew up the seal during rotation/forming. Fortunately, I bought 3 seal halves so there is no harm at giving it a go.

However, I do wonder why the factory went through the trouble of creating a special tool. My guess is that in production it is faster to have a dedicated sizing station followed by a quick crank install. But as a DIY, I don’t see problem. What am I missing?

BTW, my membership in JCNA is still pending and then I need to apply for the J17 tool loan. So I can imagine it taking a few weeks before I have the tool in my hands. Is it really worth the wait?

My understanding is that one never trims the rope seal.
I suspect (but do not know if) the seal sizing tool diameter is smaller than the crankshaft diameter as the rope seal needs to be compressed against the crank and compressed into the groove
Also, the tool is used regardless of the the crank being ground undersize so I suspect it is less diameter than the smallest undersize.

the tool is used regardless of the the crank being ground undersize so I suspect it is less diameter than the smallest undersize.

I stand corrected on that! You are right!

My understanding/recollection is that it’s just the opposite.

The tool is larger diameter than the crank because you want a tiny bit of clearance between the crank and the seal for the scroll to effectively throw oil back to the engine.

This is another point of confusion for me. My understanding is the sizing tool is 3.119" dia and my scroll measures 3.125" dia. So that is a press fit: seal to scroll.

Haynes phrases it a bit differently. It tells you to lay in the crankshaft on the shells and assemble the cover halves to each other and bolt to the block. Then with no mention of a seal, check the clearance to the scroll, which like Bentley, should be .0025 to .0055. The ID of my assembled covers is 3.210" dia and the scroll is 3.125" dia. This is a clearance of .085". So they must be referring to a clearance between the finished seal and the scroll. How this is achieved with a sizing tool smaller than the scroll is beyond me.

Perhaps someone with a 420 shop manual can clarify?

I’ve done dozens of engines using the crankshaft to size the seal, without issues. I use the crankshaft when it is out of the engine and the lower seal holder is off the block tightening the halves together with the set screws around the crank. I always soak the seals in oil for a few days before doing this - it helps getting them into the grooves. I do not ever cut anything off the ropes, but I do cut any stray threads that get between the mating surfaces. I also position the ropes so the ends are not equally flush each side - in other words one end is recessed by 1/16" and the other proud by that much. A professional mechanic from England who specialized in Jaguars showed me that 35 years ago. It’s probably not necessary. Put some grease around the seals and the crank for start up.

Thanks Terry. That makes sense to me. I like the offset split idea too.

Edit: Works great! Very simple to do. The SNG graphite seals are of the correct length so no trimming was necessary.

Terry
What sis the logic behind offsetting the rope seals?
Dennis

I’ve done dozens of engines using the crankshaft to size the seal, without issues.

I never had a sizing tool, for any engine that used rope seals: from Austin engines, to Triumph engines, to Jaguar Engines, to Ford engines.

I always used the crankshaft, I always put a little bit of grease on the scroll before starting, and in many hundreds of engines, I never had any issue.

When I rebuilt mine,I didn’t even know there was a tool. Simply did as you and worked fine.

Hi Rick, my 3 cars have all been converted to modern two piece seals with crankshaft being machined to eliminate the scrolls. Two do not leak, one has a slight leak. The rope seals can be inserted without the tool. As stated do not cut the seals but continue to press them into place with a round pipe like tool.
Good luck,
Allen

Does anyone know what this statement in Bentley and Haynes is referring to?

Thanks for the advice everyone!
Rick

When I rebuilt mine,I didn’t even know there was a tool.

To be completely honest, myself, I wasnt aware I wasnt doing this correctly until I joined this forum back in 2003.

If only I’d known about using .the correct tool…

Does anyone know what this statement in Bentley and Haynes is referring to?

Again, I think there is supposed to be a gap between the seal and the crank for the action of the scroll to be most effective. The statement quoted is the size of that gap though I think it would be difficult to measure.

I believe that gap improves the scroll action but possibly allows an amount of oil to drip after the engine is shut down.

I once heard about a TR engine being adapted to a different application that necessitated running the engine backwards. All was well except for the unmodified scroll seal which was now pumping oil out of the engine instead of flinging it back in.

Darn I just bought the tool on evilbay for a nice price though. I tried years back doing it without the tool and seemed to fit tight no matter what I did. So I cleaned and installed the old seal with slightest amount of sealer at the split. I lucked out and it never leaked. I will have this job on the E-type at some point and will use my tool.

Darn I just bought the tool on evilbay for a nice price though. I tried years back doing it without the tool and seemed to fit tight no matter what I did.

If you don’t mind, what is the diameter of the sizing portion of the tool? I’m still trying to imagine how you can get a gap if the tool is smaller than the scroll. As a point of reference my scroll is 3.125" dia.