I just bought a 1994 convertible 6 cylinder with its original tires - only 25k miles. I assume it’s not safe though I will only drive it in the summer. What tires should I get? Thanks.

What size rims are you running

Good question. It used to be that tires were considered good for 10 years, max. (“no matter the tread depth”), per the US NTSC (IIRC). A few years ago the organization lowered that time limit to 6 years (not sure if legit or maybe just to sell more tires?

). If you live in a hot climate (e.g. the South) then that time limit is probably a good rule of thumb, given how “dry rotting” can occur so easily. Always a good idea when you buy a Jag (or any car for that matter) to check the coded date on the existing tires. I did that with Superblue a couple of years or so ago when I found out how to decode the #s on the tire. Turned out the Goodyear Eagles on her - despite still looking good - were something like 19 years old.

I’m thinking the PO probably put on a new set (I know there has been debate about this subject on here, but according to MY owner’s manual G.E.s were OEM tires on the '94 XJS, N.A. model) about 5 years out, after the OEM set were done.

Anyway, check out your tire dates and if replacing, I highly recommend the 15" Cooper Cobra Radial G/Ts, which you can either use with the raised white letters out or flip around and use as blackwalls. I like the white letter look, and they are pretty reasonable at not much more than $100 per tire. They used to be available at NTB, but lately NTB seems to be having a hard time getting them in stock, at least here. However, Discount Tire has not had that problem. Alternatively, you can pay about 50% more and go for Firestones. Then there’s Pirellis (P6?), if you can even get them. I think they were running more like $260 or $270 apiece, last time I checked. I think that’s about it, as far as 15" tires go anymore. They’re becoming rarer and rarer.

oh, and btw, Cooper slightly changed the white letter style on the Cobras about a year or so ago, so if you go to get a set be sure they sell you the ones with the new letter style. The new style is a bit more slanted or italicized-looking font vs. the original style. Right now I’m stuck with the new ones on the front and old ones on the back, which looks kinda funny. I guess I could rotate them so that one style is the pair on one side and the other the pair on the other side of the car, but I’m not bothering with it, since I’ll probably be buying new rear ones soon anyway.

Here’s how to read the tire code #s for date of manufacture, from Discount Tire’s website:

In this example, the first two characters will represent the Manufacturer Plant Code. This indicates the manufacturer as well as the exact plant the tire was built.

The next set of characters represent the Tire Size. This code references the size of the tire, such as 205/55R-16.

The next three characters represent the Brand Characteristics. These are significant characteristics about the tire as determined by the manufacturer.

The last set of characters indicate the Date Code or build date of the tire by Manufacture Week / Year. Tires produced after January 1, 2000 will have a four-digit date code at the end of the DOT number, as displayed in our example. The first two digits represent the week of production and the last two digits represent the last two digits of the year of production so 1016 indicates that the tire was produced in the 10th week of the year 2016.

DOT IDENTIFICATION PRIOR TO 2000

Prior to the year 2000, the date code will be restricted to a three digit number representing the week (first two digits) and the year (one digit) of production. For example, if the last three digits are 439, the tire was produced in the 43rd week of 1999.* * * * *

Interesting (and candid) note that D.T. has recently (added?) to their website, as far as tire life. They point out that while vehicle manufs. usually recommend replacing tires every 6 years, the tire manufs themselves generally stick to the old standard of 10 years. Yet, D.T. then points out that no tires are apparently warrantied longer than 6 years. Go figure.

On the XJS the 55 profile was part of the Sports specification and the 60 profile the Touring spec. The lower profile for better handling but slightly harsher ride and the 60 profile for the opposite.
If you stick with a brand that Jaguar used originally in period (eg Pirelli & Dunlop), you should get the best all round results for noise, vibration and harshness etc. I have identified DUNLOP SPORT BLURESPONSE which at 69 Db are one of the quieter tyres out there, in preference to the Pirelli’s Cinturato P7 but both I am sure would be a massive improvement over the originals P5s.
The XJS also predates the present tyre labelling for loading. The original tyre requirement simply used to be listed as 215VR70 x 15. In practice, today, the issue is to avoid fitting van tyres which have higher load ratings and a harder ride but an insufficient speed rating. Consequently, I would look for a load rating of about 98.

1994 XJS tires should always be 16" unless you are changing wheels.
Though I can’t imagine why anyone would.
I have been buying Pirelli tires since the 1960’s.
Never had a defect, disappointment or even a flat.
The first failure was two P-Zeros after a high speed impact with a curb.
Both wheels were also destroyed of course.
I can’t ever see any reason to change now, as long as I can afford them.

I have been buying Pirelli tires since the 1960’s.
Never had a defect, disappointment or even a flat.

Go buy a lottery ticket. You must be incredibly lucky. I’ve bought 3 cars with Pirelli tyres, there were faults in all of them when I had them ripped off and replaced. One fitter was surprised that one hadn’t exploded on the way to the shop, given the obvious manufacturing faults.

Equip, with all due respect, '94s came with 15" wheels OEM (i.e. the lattice style). I think there was an optional “sport” wheel that was 16", though. Hopefully you haven’t been putting 16" tires on your 15" wheels (if that is even possible to do)!

Really? Anyone else here confirm that? I thought Jaguar had gotten away from the 15" wheels at least by the time of the facelift.

Well, I went back and looked at my '94 owner’s manual (“Vehicle Care” booklet - the original that came new with Superblue) on ps. 87-88 re: “tyre” and wheel info. and inflation.

It looks like standard equipment was the cast lattice sports wheel, with a size of “6 1/2 J x 15”. The OEM tyres were Goodyear NCT Eagle, 235/60 ZR 15 (no longer made by Goodyear, at least in that size). btw, note these are NOT Dunlops nor Pirelli.

A buyer could opt instead for the forged lattice sports wheel, which were size “7J x 16”. The OEM tyres with that wheel were Pirelli P 4000 E in size 225/60/ZR 16. (Jag notes that an acceptable “alternative” tyre for the latter would be the Pirelli P 600 in size 225/55 ZR 16. (it is my understanding Pirelli no longer makes either one of these tyres, btw). I’m still trying to figure out how to tell the cast lattice wheels from the forged ones, other than by referring to a parts # stamped on them.

In addition to the prior optional wheel, Jag also offered an optional 5-spoke cast alloy wheel in size “7J x 16”. To me, the wheel shown in the guide looks exactly like the OEM wheels that came on Superblack, my prior '95 4.0 coupe (maybe they became the new standard wheel that MY?)… Oh, and for the 5-spoke wheels, Jaguar indicates the same type/size tire (and alternative tire) as for the forged lattice wheels mentioned earlier.

When it comes to inflation pressures, hang onto your hats boys. This is where it gets interesting and I learned something new and shocking. Jaguar recommends the same pressures regardless of the prior wheel/tyre sizes or tyre makes. The difference is whether you prefer “normal” ride vs. “maximum comfort” ride. For the former, the tyres should be pressurized to 34 lbs. in the front and 36 lbs. in the rear. The latter: only 26 in front and 28 in rear (for some reason I always thought this was 28 in the front and 32 in the rear, but maybe I had been thinking of my XJ40s and X300 all this time ?). What’s really freaky: Jaguar says that if you are using tyres of any other brand, you should instead (“must”) be inflated to 44 lbs. all the way 'round. wth???

So, I guess that means I better seriously pump up my Cooper Cobra GTs, no matter what the rec is that is stamped on the tires themselves. ?

That might also explain why NTB told me my front and rear ends are out of alignment - maybe it’s underinflation that has been prematurely wearing the tires out. ?

Should be easy to determine forged from cast if one is 15" and the other is 16".
As far as tire pressure goes regardless of what the manual says I would seriously recommend you not exceed max inflation pressure suggested by the tire manufacturer if it was less then what the jag manual suggested

NEVER exceed the pressures on the tire. Jaguar is not a tire specialist.

I believe thats an misprint. 34psi is probably what they were trying to say?

I thought Jaguar had gotten away from the 15" wheels at least by the time of the facelift.

This is a common mistake we, the V12 guys make. 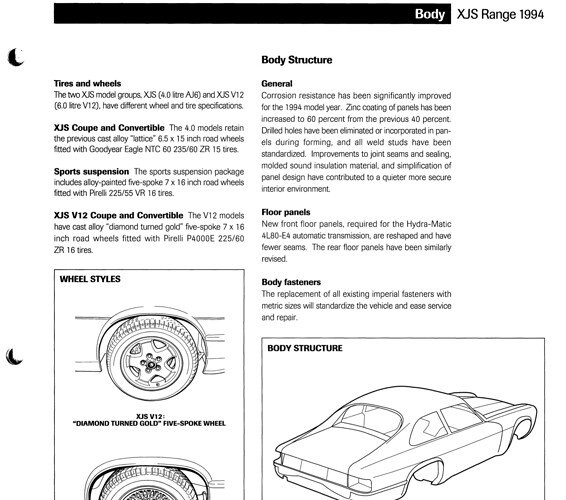 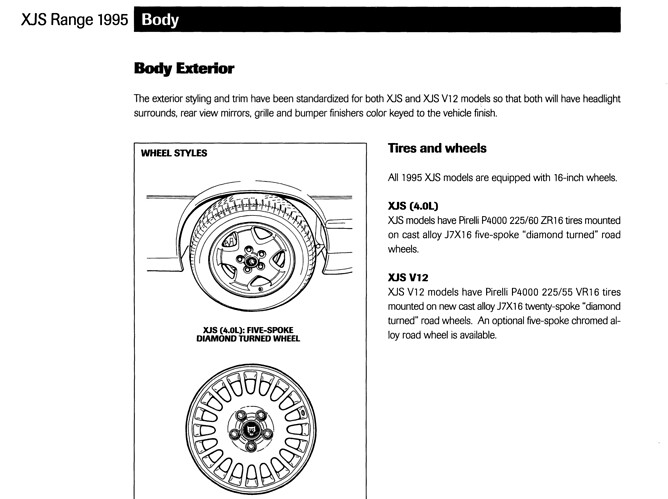 Are both cars equipped with V-rated tires? Because V-rated 15" tires got pretty expensive around that time. I would have thought Jaguar would have gone with 16" wheels just to save money.

The answer was on the page I provided earlier.
I magnified it and a new screen shot is attached below. 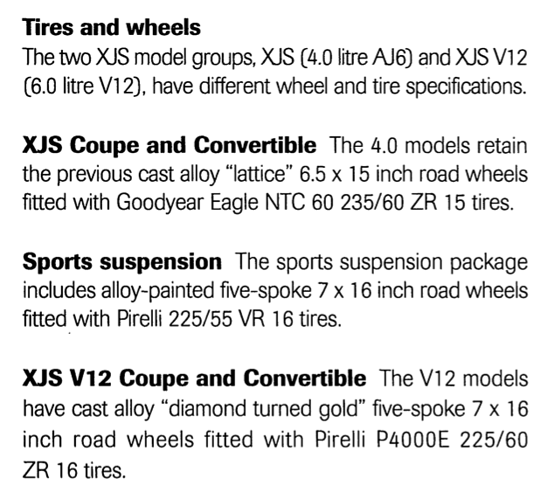 I stand corrected.
Once I found the information I was looking for in the owners manual I stopped looking.
Thanks for the enlightenment.

Oops - yep, guess I kinda brain-fahted on that one, Wayne …

I wondered about that too, VK. Or possibly a U.K. system of pressure used on that notation in error (don’t they use a different scale than we do in N.A.?)?

Interesting about the “gold” thing, Steveo … I take it they were painted and not actually covered with a thin layer of real gold plating ?