Jaguar 420 - which gearbox will fit

Hi
I own a 1968 Jaguar 420 with manual gearbox, unfortunately the gearbox is not working properly and I am considering to install other gearbox (used one)
I cant find a accurate information which used gear can fits to my car? I noticed that there differences on the overdrives models.
can any one can refer me to a vehicles whose have gearbox is the same or suitable for me?
thanks

The full synchromesh gearbox from about 1964 onwards from all Jaguars up to the XJ6 wil fit.
That is Etype, Stype, 420G, Daimler Sovereign, XJ6. Late MK2, 240 and 340.
In some cases you will have to change the top cover.
Some Etypes won’t have overdrive, and the 2.4 models have some different internals in the overdrive.
You need to be looking for the compact type overdrive unless you want to swap the earlier unit with your existing one.

Actually, no E types will have overdrive unless it was added after the cars left the factory.

check the website of Dellows Engineering in Sydney Australia

tanke you all,
I guess a 5 speed version would be too expensive for me.
I’ll try to find an XJ6 gearbox -
Are all XJ6 gearbox are the same over the years?
thanks
shahar

You would need to swap the top cover with the shifter mechanism and strikers IIRC, easy peasy. The E-type and 420 use the short top plate and XJ, MKX / 420G use the long plate which moves the shifter stick a few inches towards the rear. I had photos somewhere when I finished the auto → manual +O/D back in 1996/1997 on my ex Ser 1 E-type 2+2 #1E76372BW.

I do have a fully working low mileage Ser 1 XJ6 4.2L gearbox, O/D, bellhousing + clutch assembly that I don’t need but I’m not splitting it up and it’s not cheap. (I paid over €2000,- for the lot and it would be perfect for an auto → manual +O/D conversion)

The 2.8L had different gearing

Pekka’s not quite right, and someone else’s answer about BW automatics obviously doesn’t answer the question about a manual 420…

The first question is how long is the 420 distance from the block/belhousing joint to the gearbox/propshaft joint. I assume it’s about 27 inches.

Jaguar introduced the 27” transmission with the LWB 2+2 E-type in 1966 and possibly the same model year of 420, MkX or 420G? Then the XJ came out in 68 with the same dimension box but a gearstick set back by a couple of inches.

Not all XJ manuals had OD but many did and the auto/OD/standard boxes were all the same length from block to flange. I don’t know the 420 size but it’s likely that any 4-synchro box from any Jag except a SWB E (too short) or Mk2 (too long) will fit. The 2.8 used a lower first gear and diff but for fitting to a 420 almost anything will do.

I think the easiest thing might be to repair your original gearbox as it helps car value and you know the box will be OK. A used gearbox may be worn. What is wrong with your gearbox at the moment? Thay last a long time even if a little noisy and changing oul type may help?

The Series 3 XJ 3.4/4.2 used a Leyland LT77 5-speed gearbox common to many BL models (Getrag came in 87 for the XJ40) but it needs a different flywheel, starter, bell and clutch. B

The Series 3 XJ 3.4/4.2 used a Leyland LT77 5-speed gearbox common to many BL models (Getrag came in 87 for the XJ40) but it needs a different flywheel, starter, bell and clutch. B

But I have never seen a manual XJ without O/D, but maybe they exist. I would like to see one, at least all the LHD manual XJ6’s and Damiler Sovereigns I ever have sen have all had an O/D.

Although most spare parts catalogues give a part number for a belt for the XJ6 waterpump without Power Steering, but AFAIK no XJ was ever made without power steering, except perhaps a couple of race cars.

To illustrate the “short” top cover and shifter stick position here’s a pic from 1966 at Browns Lane with E-type SWB 4.2L engines together with a gearbox and shifter ready to get assembled into a car. (the LWB E-type / 2+2 gearboxes would have an extension on the gearbox as described by Pete in the previous message.) 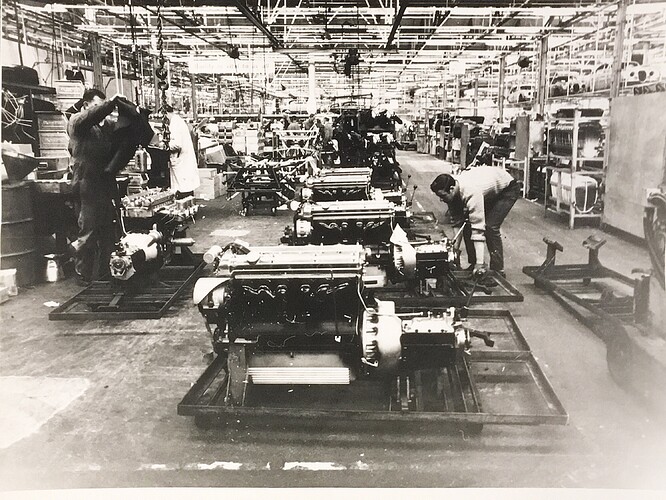 I must say that I am very impressed of knowledge, thank you so much everyone.
By the way the attached picture is really beautiful.
Regarding the gearbox-
It is not possible to downshift from third gear to second, except at complete stop (probably faulty synchron).
Also the overdrive does not engaged (the electrical system is working properly) and I
found many residues of clutch material in the oil of the overdrive box
Also there is a bit of noise - probably from bearings.
beside that there are no further issues.
Since shipping to me (to Israel) is very expensive, I do tend to overhaul by my self my vehicle’s gearbox

I misunderstood that the original poster was considering a change to an automatic.
But here is a photo of a full syncho box with compact overdrive as fitted to a 3.8S post about November 1, 1964. I assume it would be the same as a 420 and maybe the XJ series. 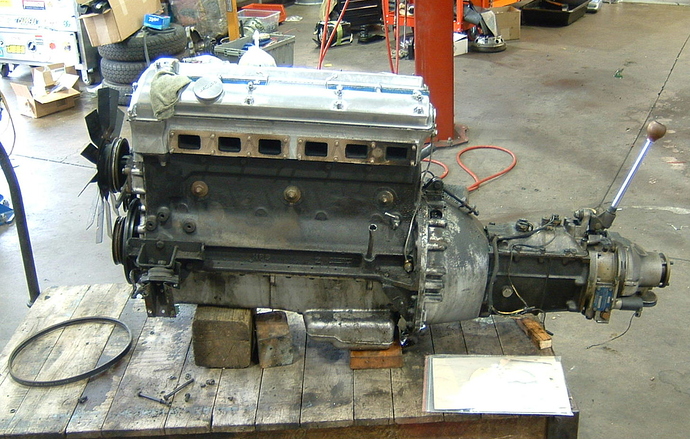 Bingo! Same shifter mechanism and gearbox top plate with strikers as a 4.2L E-type but with a compact type A Laycock de Normanville overdrive.

XJ6 would have a longer top plate that moves the stick a couple of inches further back. 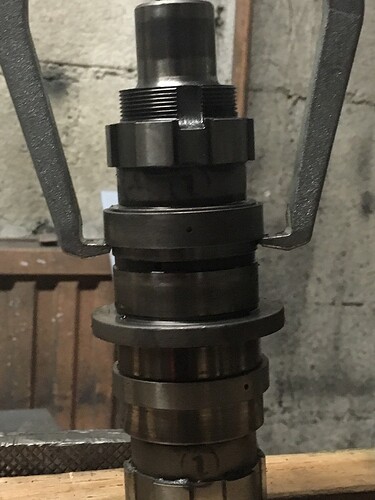 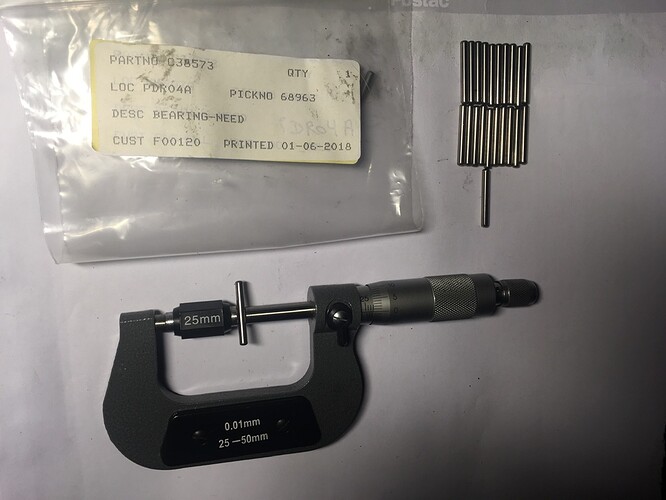 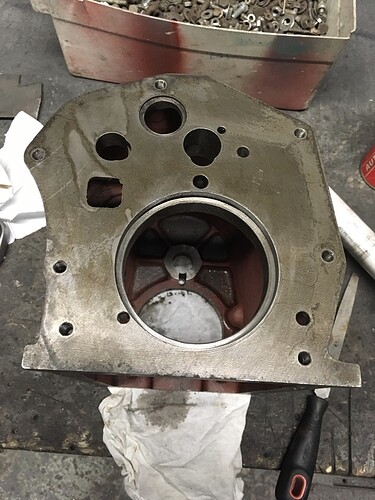 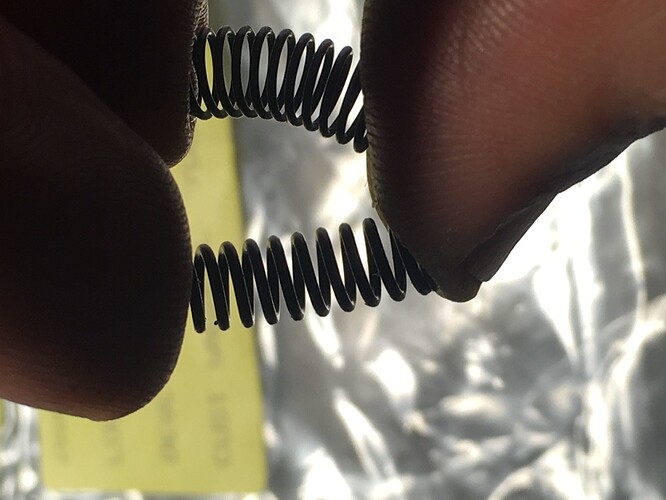 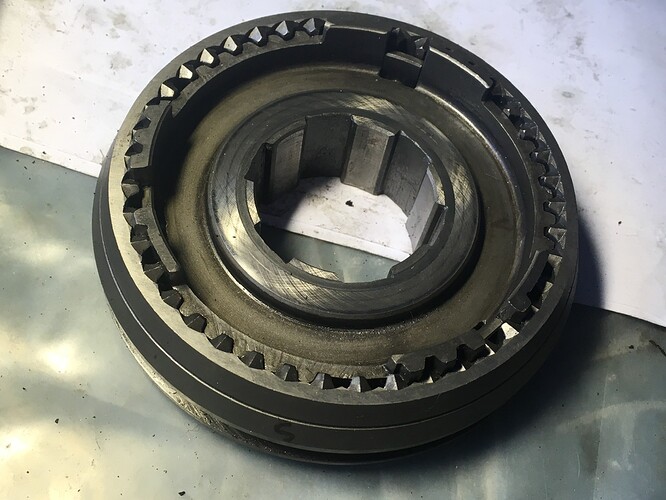 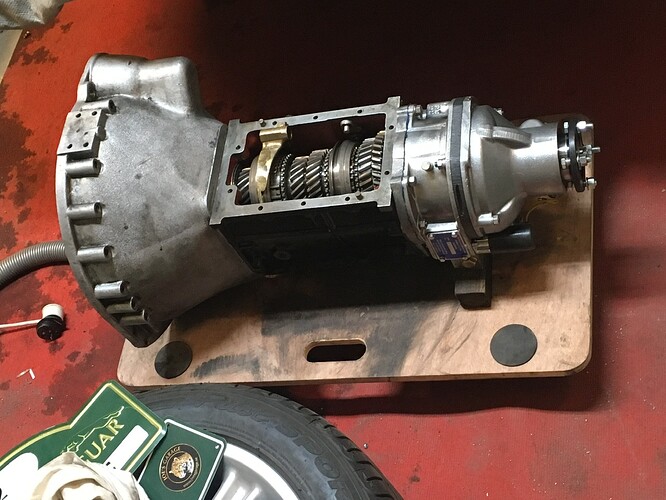 I would suggest a rebuild, it’s not rocket science, I replaced the mainshaft and at the same time all ball bearings, layshaft needle rollers and all sychros, with the exception if the springs inside the synchros that push the detent plates and balls that lock the gears in place.

IMO the new parts from one of the usuals were far too thin and weak. I reused the original springs from 1975 and the gearbox is PERFECT, it’s just like new now.

You are lucky to have found a 420 with a factory manual gearbox. Does it have overdrive as well? If so, it’s the same gearbox used in post 1965 Mark 2’s ., same as I have in my 1967 Mark 2 3.4. . If you can find someone who can repair your gearbox properly, it would increase the value of your car, and, working properly, the all synchro gearbox with type ‘A’ compact overdrive is a joy to drive. I have a friend up in Ramat Gan who owns an automatic 340, perhaps through his current mechanic, you could find a lead on any potential used gearboxes or referral to a competent transmission shop to properly overhaul yours. You may PM me for further details. “Behatzlacha”

Hi Pekka
Look in the brochure section on the old site for the non-OD XJ long box option. I’ve sold a few and thry are basically the same as the XJS 4-speed boxes I also sold two of. I would agree most manual XJs would have an MOD box but some people bought entry-level cars with very basic spec just to have a Jag. I don’t know about steering but your account sounds plausible.

The first alloy sixes and Getrags did appear in XJS I had an 84 Banham convertible and an 85 coupe yet I’ve never heard that manuals were the only choice? Maybe the brochures will reveal that also? But this thread is about salons and my comment was about S3 XJ and LT77, so I didn’t go deeper into AJ6 pre XJ40 transmissions.

I had a post 65 Mk2 non-OD box that I collected for the late Dick Vandermeyden. He said it was Mk2 and it was inches longer than the Compact type A boxes we are discussing.