Hello everyone! I recently replaced my AC compressor and overhauled the pressurised side of the system and now I’ve got cold air however it’s stuck on max cold, when I set it to demist I get warm air out of the two outer vents and the demist vents however when set to any other setting I only get cold air, I checked for voltage at the temp control switch and I get 0v. Any help would be greatly appreciated!!
Thanks
George

I don’t know if the 88 has the Delanair MKII or the MKIII. There are some differences between them.

Do you hear the servo working when you turn the Temp control one way or the other?
At least for the MKII, the prime suspect is the A/C Amplifier.
An other is a stuck Heater Valve.

Thanks for your quick reply! When I turn the knob either way I can’t hear anything from any of the servos and I believe my car uses a mark III system as it differs from what I’ve seen in my workshop manuals

The Mk III system is easily identifiable by the ‘pull for manual control’ feature of the temperature control dial. As I recall it was introduced in the Series III V12 sedans late in 1986

If you have the Mk III system you won’t hear very much of anything. There is no ‘servo whir’ because there is no servo.

I’ve repaired a couple misbehaving Mk III systems by cleaning connections and grounds. The are several very small connectors with very tiny pins…that are easily compromised by corrosion. Some are easy to reach; a couple are not.

If you PM me your email address I can send the MK III testing/diagnosis manual.

Thanks I’d very much appreciate a manual to help me find my issue also I’m new to these forums but how do you pm someone on them?
Thanks

Hi George, just click on Dougs photo and you will see the option ‘message’

Welcome by the way!

If you’re getting cool air all the time, there are a couple of things to check. First is that your heater core is getting hot. Check for flow, check the heater valve, make sure the heater core can actually heat.

Second, and unfortunately the more likely, check that the flaps that control whether the air goes through or bypasses the heater core are working as they should. If it’s a MkIII, these are moved by servo motors that fail all the time, and the upper one is a real PITA to access to replace. And they’re expensive and hard to find.

I have a couple of proposals for substitutions for those servo motors, but none of the details have been worked out yet.

Georgia, you got cold air coming out of a 35 year old car. You should be dancing the jig.
If it gets too cold turn it off. Too warm turn it on.

Which V12 model year, George - as Aristides say; it’s crucial to identify which Delanair version you have…

I’m with Tom Mally on this one, when it comes to a/c, the colder the better. Which brings me to my next question, related to a post I shared several weeks ago. On my 1986 series 3 XJ6 still equipped with R12, I’m debating what to do, if anything at all. The sight glass appears clear, which supposedly means ‘full’, and the a/c blows cold air. I always keep my temperature setting on 65, as I want it to blow as cold as possible. Last week, on a warm (low 80’s F) day, with a substantial amount of humidity in the air, I went for a drive. Whenever the air coming out of the vents felt as cold as I would like, the compressor would cycle ‘off’ for a short while, meaning the air coming out of the vents isn’t “as cold”. A minute or so later, compressor would cycle ‘on’ again with colder air returning. Is this normal, then? Perhaps I’ve just been spoiled by the super cold air I get in my ‘modern’ Toyota, or could it possibly be something with the ‘Ranco’ device not behaving as it should? Or, despite the clear sight glass, could the system still be a candidate for a small addition of R12? Several months ago I purchased a product which I haven’t used yet, called ‘Envirosafe R12 AC booster’ which comes in a small 4 ounce can. I’ve been leery of adding it to my system so far, as the label on the can warns in large letters, ‘NOT TO BE ADDED TO A FULLY CHARGED SYSTEM.’ I remember when I purchased the car in 1996 , the previous owner said, “the a/c works, but it will never achieve the maximum coldness you may be used to if you own a modern Japanese car.” What to do? Any useful advice appreciated. Thanks.

Yours is a MkII. I recommend going through the linkage adjustment procedure outlined in the Book.

And don’t add anything to the freon circuit. It’s fine.

What chapter in which book would I find instructions on linkage adjustment? I’m more than a bit confused.
Thanks

I couldn’t get the message feature to work but I did find another copy of the diagnosis manual and according to the manual the fault is with my temperature control switch, next question does any one know where I could get a switch for a mark 3 unit?
Thanks
George

…as already referenced by Aristides above. There’s a section on the MkII within the Climate Control chapter.

**
Perfectly normal, Mel - it’s a sign that everything is working as it should. When the Ranco senses that the evaporator temp falls below +2C it cuts power to the compressor clutch - restoring power as the temp rises. The evaporator is cooled by the compressor and heated by incoming air - at some stage the compressor wins…

You may want to try David Boger at everydayxj.com

I had my Delanair 2 stuck on hot last week. When I took the round connector off the amplifier in the left footwell, I applied 12v to the red and purple wires and got the servo moving. And then noticed the contacts in that connector were a bit corroded. Cleaned it up a little and good as new! Then discovered the fuse holder for the black ground wire wasn’t making good contact either so cleaned that up also. 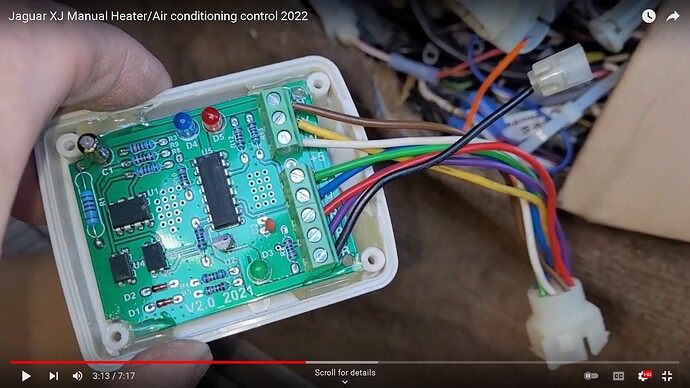 0021920×1080 376 KB
hello Jaguar enthusiasts, this might be a help for someone who is having problem with the famous Delainair HVAC controller (amplifier) XJ6 / XJ12 & XJS up to 1987
This is a modern controller developed by a Jaguar enthusiast in USA, who kept no secrets or hidden components.
you can watch his video on Youtube and download the schematics from his webpage:
www.thisoldjag.com
cheers
1 Like