Hello, I recently purchased Jaguar XJS 5.3 v12 1983 with a mileage of 145,000km. The car stayed with the owner for 4 years (it did not run), the engine immediately works and works beautifully, but when I turn on D, it will go for a while and at the end … R also does not work. Maybe you also have such a problem? do you have any idea???

I haven’t checked yet, but the previous owner said he was changing oil and filter … but under the car I saw a wet hose

is the scoop for checking transmission oil? or just check under the car?

Lukas77PL,
Do you have the Owners Manual for your 1983 XJ-S? If not, you should get one. It will tell you how to check the engine oil and transmission fluid, as well as hundreds of other important things you should know about your car.
Attached is a picture of the transmission dipstick, circled in yellow, in my wife’s 1990 XJ-S convertible with 5.3L V12 and GM400 transmission. It is located at the right rear of the engine near the firewall. Your Owners Manual will describe how to check the fluid and the correct fluid to use. 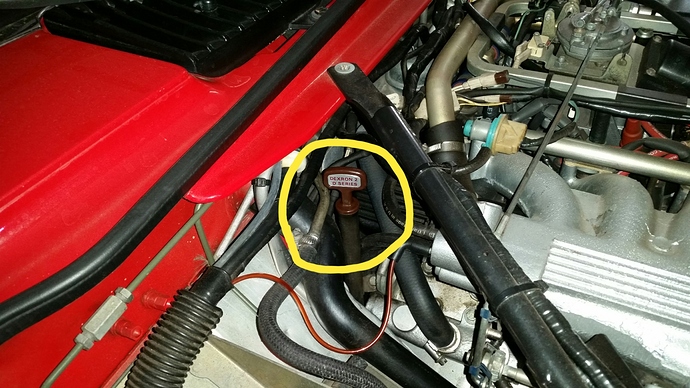 I just haven’t received all these books from Jaguar … yes I know, I looked at this measure of oil and there is red oil, but the oil was, I will check tomorrow what is the level 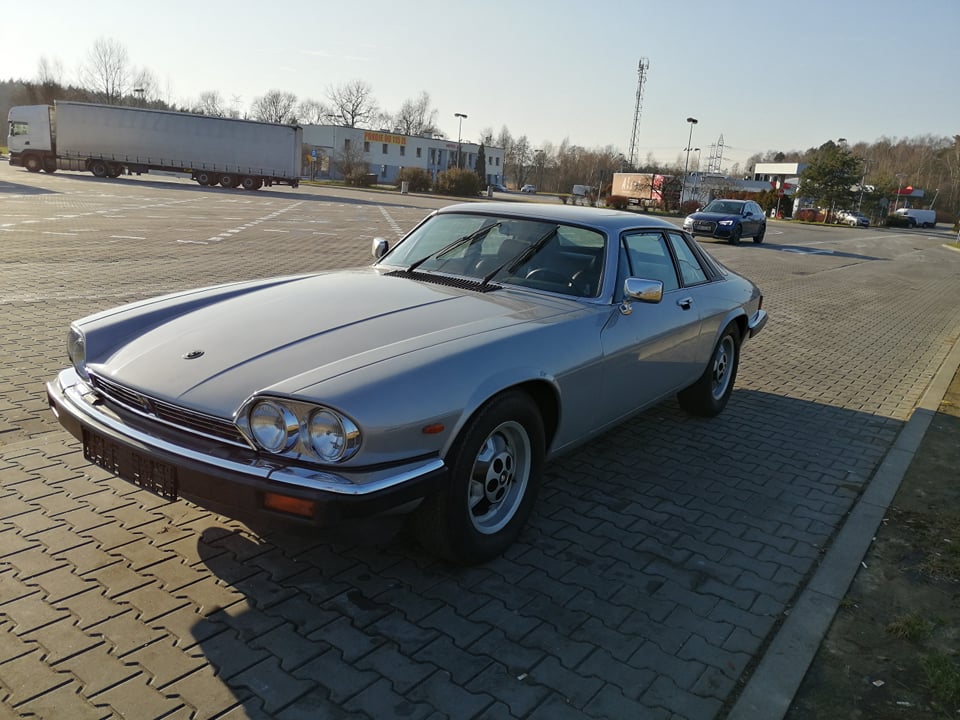 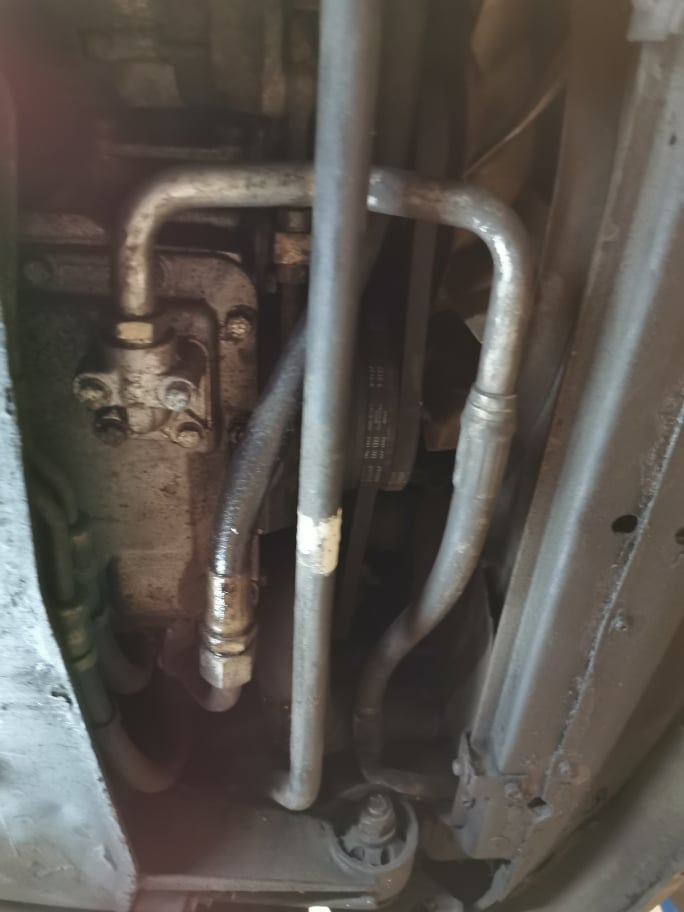 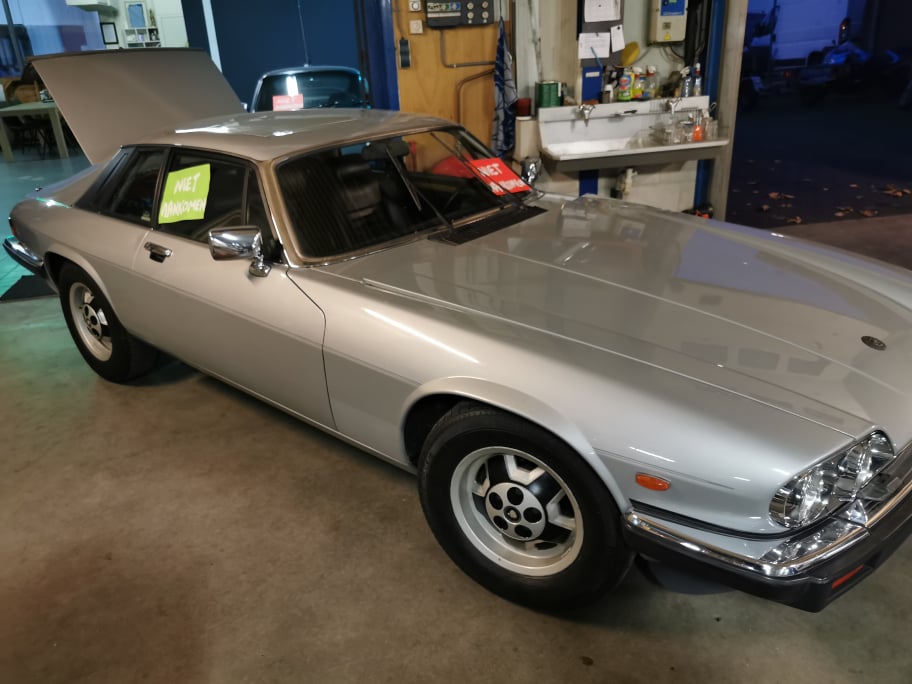 this is my Jaguar, the hose is slightly wet with oil

You need to determine ATF level, and condition of ATF. You should be able to shift back and forth between R and D and hear it clunk.

Hopefully it’s pink or reddish. If it’s slightly brown or dark red, change it asap (big job)
If it’s very dark brown or even black, then your trans is shot.

Hello Greg, the oil is red. There is no sound between R and D

Ok. Red isn’t bad, but it should probably be changed when convenient.

I’m no trans expert, at this point I would check the linkage? (Assuming there’s plenty of fluid in the transmission)

Is the car at your house or still at the previous owners?
I’m not the mechanic that many others on this website are, so I’ll refrain from advice other than to say if it were mine, since its been sitting so long, I’d have it carted to a transmission shop and let them service it (drain & refill, change the filter, check the linkage, etc), assuming they are familiar with a standard GM TurboHydro 400 transmission. Also get the engine oil drained & refilled, check all rubber hoses, drain & refill the radiator, change-out the oil & air filters, check the spark plugs, and have the a/c tested (also check the tire dates).

If you can get it up on jack stands so that someone can work the shiftier inside while you watch to make sure the shift linkage is working underneath the car, that would be the best thing.

ATF level is usually checked with a warmed up car and engine in park. You should have fluid up to about the mark on the trans tube dipstick. A little leakage isn’t going to cause the problem you describe.

Either the linkage is off, the fluid is low, or it’s an internal issue.

If its an internal issue then there’s a limit on what can be done w/ the trans in the car - mostly dealing with valve body, governor, and a few other bits.

This is a TH400 GM transmission in a jaguar-spec casing (with an uprated torque converter with 6 lugs instead of 3). ALL the internals are exactly the same as in billions of GM vehicles that have been on the road over the last many decades.

They’re very easy to rebuild (comparatively) and amongst the cheapest to do so due to parts availability and simplicity (comparatively), but the labor is what brings the price up. Since TH400 performance bits are fairly cheap, there’s no reason to skimp on better parts IF one has to come out.

I did a DIY rebuild of mine many years ago although I understand many would want to leave it to a pro. Even so I recommend picking up a TH400 performance modification book and go through it so that one might know what to ask about for getting certain upgraded parts - better sprags, more clutches, kevlar reverse band, TCI or B&M valve body shift kit etc to make the trans more sporting rather than a clutch eating slush-box.

There is a notorious problem with the GM400 in the XJ-S that may result from the fact that the pan is medium depth, halfway between the standard depth and the aftermarket deep pan. The filter is held up by an O-ring – or two O-rings – and it falls down and sits in the bottom of the pan. From then on the pickup is at the port where the filter plugs in rather than the filter itself. The tranny won’t work right at all, but works much better if you overfill it. Hence, the cheap way to confirm this diagnosis is to overfill the tranny and see what happens. If it suddenly works much better, time to drop the pan and reinstall (or replace) the filter. Make sure to install the filter with two O-rings.

It’s a PITA, though, because the transmission mount must be completely disassembled to get the pan off and check the filter or even to simply change the fluid. Some have opted to add a drain plug while the pan is off. If you take it to a shop, they have been known to simply bend the pan down to drain the fluid and change the filter, then bend it back into place when done. That’s how difficult it is to R&R that tranny mount. Read all about it in my book.

The previous owner said that he changed, but I will put the Jaguar on the garage anyway and then I will check. It surprised me because the engine really beautiful starts and sounds nice. When I was loading the Jaguar on the road vehicle, it drove normally. That’s why I’m surprised

Tomorrow I put the car back to the mechanic, so I will check everything you said