Counting the leads… Does that head have twin spark plugs per cylinder?

Wonder how the twin dizzys are driven?

How could you possibly think this could work?

Wonder how the twin dizzys are driven?

A chain inside the case is my guess.

The important question, not yet asked: what kinda 1/4 times is this puppy laying down?

One of the past uses of the engine from the Silverstone (when Dad took it out and lumped the car with a 283), was in a dragster of a friend of his.

It caused GREAT consternation, because the rules for that particular class specified a “production-based 6 cylinder.” It also was kicking all the other cars’ butts.

Welllll… what ticked off the authorities-- who nastily overruled the use of the Jag–was that it wasn’t from an American car.

American exceptionalism goes to the 1/4 mile…

I don’t begrudge the use of the spin-on filter, that looks like one of the WIX racing versions, but the use of the alternator and starter is out of place on a dragster. Normally these are push-to-start, and as often as not, magneto fired, so no electrical system at all. I knew a couple of guys who raced straight six dragsters, I think the class was D/dragster. GMC 292 and Ford 300 dominated the class. Someone once figured out how to slice-and-dice Ford Boss 302 cylinder heads to get a six cylinder unit out of the result, but these were pretty quickly banned.

So I just blew up the photo and noticed “T T Race Engines” on the side That would be Trent Terry, son of Bill Terry. I believe Trent died of cancer some time back, but they kept his name on the engine shop. They used to own Terry’s Jaguar Parts, before selling the parts business, but keeping the engine building side. So far as I know, Bill Terry is still building Jaguar race engines, probably been doing so for at least 40 years. I know I used to call and pick his brain on occasion.

Also, the charging system is even more odd once you notice that there is no cooling system at all. The block water jackets are likely full of grout.

Here is an old remote mount WIX/NAPA filter I have on the shelf. The filter is threaded 1-1/8 - 16 and I think the hose fittings are dash 12. 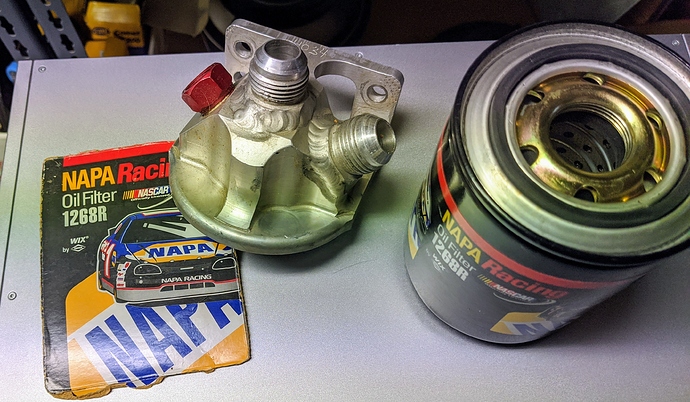 So I just blew up the photo and noticed “T T Race Engines” on the side That would be Trent Terry, son of Bill Terry. I believe Trent died of cancer some time back…

I believe it was a motorcycle accident.

Hello all, I just received notice that Trent Terry passed away on Sunday. Obituary reads: William Trent Terry, 38, of Benton, IL, died at 12:05 a.m. Sunday, November 16, 2008 at Helia Healthcare Center, Benton, IL. His wishes were to be cremated. A memorial service will be held at 7:00 p.m. Saturday, November 22, 2008 at the Benton American Legion, 311 South Main St., Benton, IL. Hobbs-Johnson Funeral Home, Benton, IL is in charge of arrangements. Memorial contributions may be made to R…

I believe it was a motorcycle accident.

Now that you say it, I believe you are correct.