The final J.8 SPC of January/February 1958, however, mentions for these early Plates C.2941 and C.2046 only 4 of these set screws plus four 2½ “ long BSF set screws. Here we had the discussion whether the latter were a service replacement for the original 4 long csk wood screws spaced at 19 inches.

Did the October 1950 SPC discard the two early Plates C.2941 and C.2946 and referred only to the screws required for the meanwhile introduced new Plate BD.4256? That might be a possibility…

Unfortunately we still cannot refer to any “evidence on paper” for the 4 csk wood screws.

I understand these to be four for attaching the BD.4256 panel to the boot lid, and four for attaching the license plate to the panel.
Bearing in mind that this is a spare parts list, and not an assembly instructions parts list, we should not assume that the 8 screws apply to the C.2941 & C.2946; the office girl that typed these lists up may not have been made aware that these two did not get the full 8.
We are not yet clear on what screws were provided, if any, for the Euro version panels to attach the registration plates.

Rob and Bob, I took some measurements of the under-side of my spare license plate panel to determine the length of setscrew necessary to fasten it to the boot lid (with a common washer under the head of the setscrew). A 1/2 inch setscrew would be too short. It appears the four setscrews would need to be 3/4 inch to no more than 1 inch. Thus, I think the 1/2 inch setscrews are a mistake in the SPC (or four of them were intended to attach the numberplate).

If there are indeed mistakes in the SPC, then I’m wondering if it’s more than likely that the early steel license plate panels were attached to the boot lid with 1/4 BSF setscrews in probably one inch lengths.

Perhaps someone with an early steel numberplate panel with 15 inch spacing between the attachment setscrews will remove a setscrew to confirm the length and whether it’s UNF or BSF. 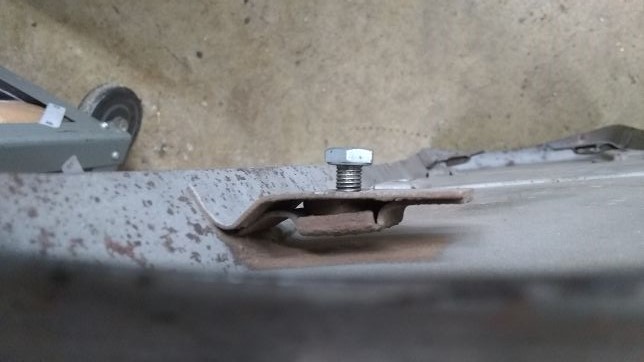 Although I would like to point out that the captured nuts are very thin, not many threads, so it would be possible to cram in a 1/4-26 BSF without realizing that you had cross-threaded it.

Same, trying to get a good pic across two edges, the screw head sticks up enough to go through a boot lid and washers. 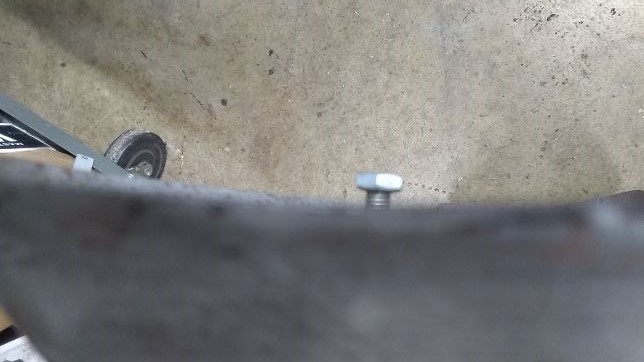 It appears to me that, allowing for a certain flexibility in the welded tabs, a 1/2" screw would be long enough to work here. 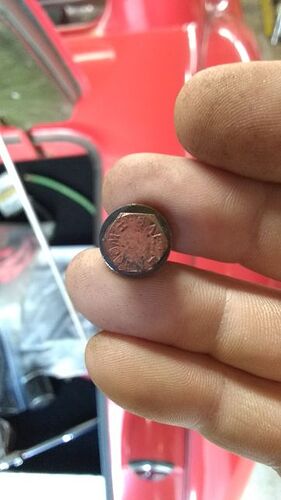 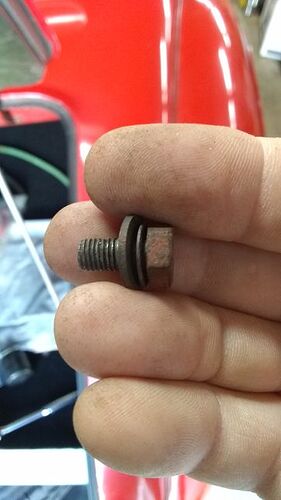 Bearing in mind that my rear panel has been changed from a 15" spacing Euro to a 12.5" spacing US, perhaps in the late '50s or early '60s when it came to the USA.
But seeing this, I am inclined to believe the screws are the originals, simply swapped over when the panel was changed.

Rob, to be more exact, your pictured setscrew is actually a 1/4"ANF which predates the revised 1/4"UNF setscrews made to the requirements of the new British Standard for UNF fasteners. If a UNF setscrew it would have the mandatory visual identifier of a depressed disc in the middle of the head…

See following example of the UNF identifier of a depressed disc - regardless of brand, size or grade of steel… 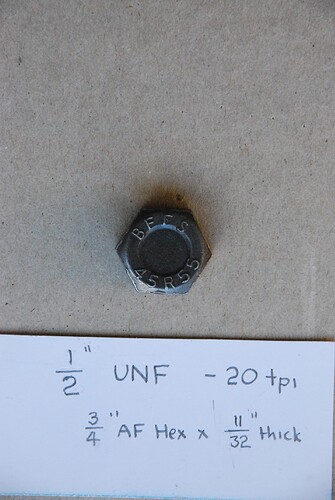 Inn the absence of any British Standard on ANF (American National Fine) fasteners, British manufacturers were free to identify such bolts/setscrews how they saw fit, and it did vary from brand to brand - WODEN and SPARTS (two brands infrequently used by Jaguar) both marked such fasteners with SAE (for the US Society of Automotive Engineers, not strictly the correct NF American standard, but good enough), and interestingly H-T for ‘High Tensile’ steel, which in reality was the first ‘graded’ mild-steel 45-55 ton yield, as coded grade ‘D’ as used by other brands such as BEES and AUTO (more commonly used by Jaguar) 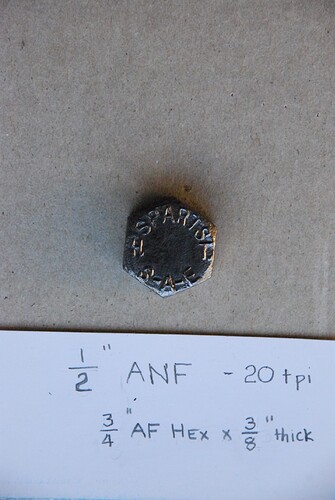 But back to your point, use of a SPARTS brand ANF fastener, is consistent with being used on a 1951 XK120, whereas Mikes Nov 1953 car, I would indeed more expect use of a UNF fastener and of revised steel grade ‘R’ (also a 45-55 ton mild steel, superseding the ANF grade ‘D’ designation), although with AUTO brand as advised the R designation was introduced on the last of their ANF fasteners without the depressed disc identifier… see below… 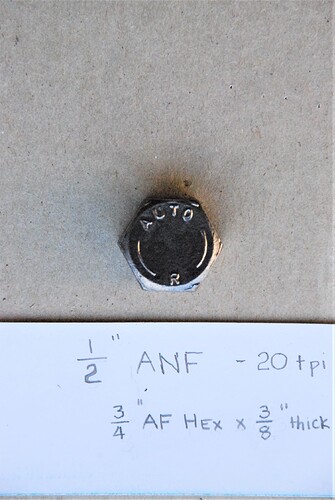 AUTO R-051851×2757 312 KB
Mike doesn’t advise whether his screws are ANF (without depressed disc) or UNF (with depressed disc). In the 1/4" size they are otherwise identical fasteners, but this ANF to UNF, and use of H-T or D grade, or R grade steel, transition is all most interesting re exact dating during the later XK120 period - in contrast XK140s being pretty well all UNF and R grade, are relatively boring

Roger, the four AUTO R setscrews are exactly like your image with no depressed disc so I’m assuming they are ANF since they attach a license plate panel. However, in my collection of 1/4 inch Auto R setscrews, a few have the ANF threads but most have BSF threads. Yet both ANF and BSF AUTO R setscrews appear to have identical head stampings. Is it just the slightly different ‘across flats’ dimension that distinguishes ANF from BSF?

Yet both ANF and BSF AUTO R setscrews appear to have identical head stampings. Is it just the slightly different ‘across flats’ dimension that distinguishes ANF from BSF?

The difficulty in quickly identifying fasteners with threads different from the British original BSW/BSF threads is the reason why the new British Standard for UNC/UNF fasteners dictated need for a quick/ready identifier that it was actually a Unified thread - thus the depressed disc in the top of the head, and for nuts, joined-circles stamped along one of the hex flats.
So given all original BSF hexagon headed setscrews/bolts remained FLAT (apart from branding, and marking for grade of steel) in the absence of any regulated Standard the initial post-war made ANF fasteners had just the brand, and whatever each manufacturer wanted to add… at least SPARTS and WODEN saw fit to add S-A-E thus identifying as being ANF rather than BSF, but BEES, AUTO, GKN etc did nothing, so yes the only way you can tell a BSF fastener from an ANF fastener is to measure the ‘across flats’ dimension of the head, ANF always being a standard fraction AF size, whereas all BSF hexagons are based on the shaft diameter, multiplied by a factor that gives a non-standard fraction size hexagon, easily determined by having a set of Whitworth Spanners and seeing what size is marked on the spanner that fits…
Otherwise, you need to measure the shaft diameter, and count the threads-per-inch, with BSF a different tpi to ANF for the same shaft diameter. And if your eyesight is good with a good thread gauge, you can also differentiate the 55-degrees thread angle of BSF threads versus 60-degrees of ANNF/UNF thread angles. I have both UNF and Whitworth Thread Gauges, so you can differentiate thread angle, but usually just Hex size is enough, and if not shaft diameter and tpi is enough.
Note in day to day usage, the only difference with ANF and UNF is the tpi for the 1" ANF/UNF size, all other sizes have same tpi. A 1" ANF is same as a 1" SAE with 14 tpi, whereas a 1" UNF has 12 tpi. And yes, this can be an issue, if you need new slotted nuts for your XKs Salisbury rear axle half-shafts - they are 1" ANF slotted nuts…

Note also that the British Standard requirement for the depressed disc in the top-of-the-head identifier was only a temporary requirement with the new introduction of UNF fasteners in the early 1950s (exact date varied manufacturer to manufacturer, given this requirement was known before the actual standard was officially released), again part of the XK120 period of interest. But this requirement was deleted in a later update of the standard in the late 1950s, albeit many manufacturers continued to still provide the depressed disc well into the 1960s and even 1970s, albeit another change in early 1960s allows you to easily differentiate a 1950s UNF setscrew/bolt from an early 1960s one on, so this gets interesting for those restoring 3.8 E-types if they want to maintain ‘authentic’ bolts/setscrews…

For all interested.
I tried to make an overview of the various Rear Number Plate Panels as used on the XK 120, thereby using the input of all that participated in the discussion (as far as relevant).
Comments invited.