Q1. What type of material is the flexible air intake ducting under the front wing? Fabric, rubber, other?
Q2. What type of material are the three protective pieces on the bodywork behind the spare wheel in the recess. Rubber, foam, other?
Q3. Did the three Terry clips actually hold the wheel brace in the boot area as the design of the wheel brace, with the socket end, doesn’t allow it to clip in fully?
Could someone post some photos please.
Also looking for the design of clip for the jack also with photos if possible.
Thanks in advance. Graham.

I’m back. My neighbor had a crew installing new fence posts Saturday and they cut my internet cable, fixed today, catching up on the forums.

The flexible air intake duct hose was thick paper wrapped over a steel spring like a Slinky toy, and covered with some sort of waterproof coating, probably rubber. This is an original. 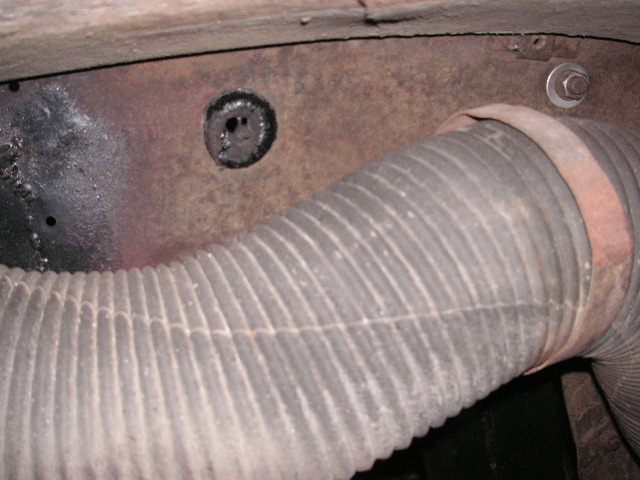 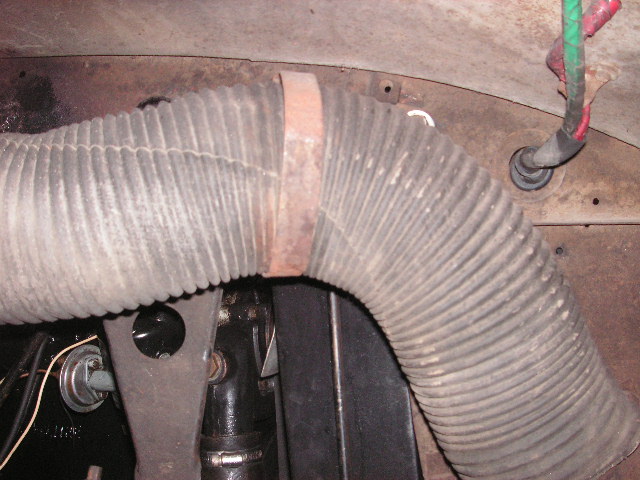 The pads in front of the spare tire were foam rubber, about 1/2" thick. These are originals. I recently bought a sheet of this stuff for my Mark V from McMaster-Carr. 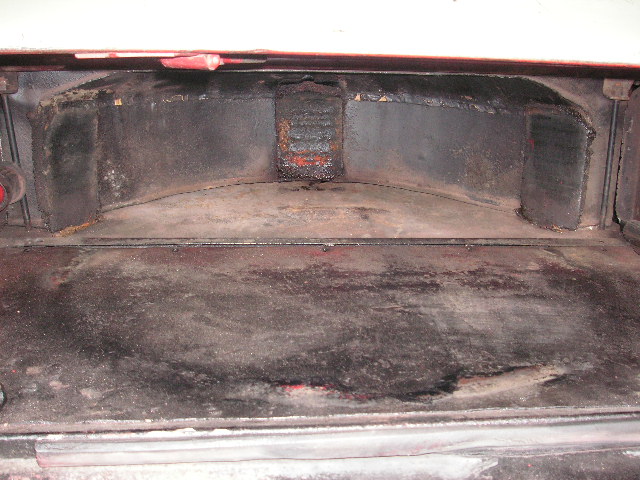 Here are my wheel brace clips, not originals, also from McMaster-Carr. 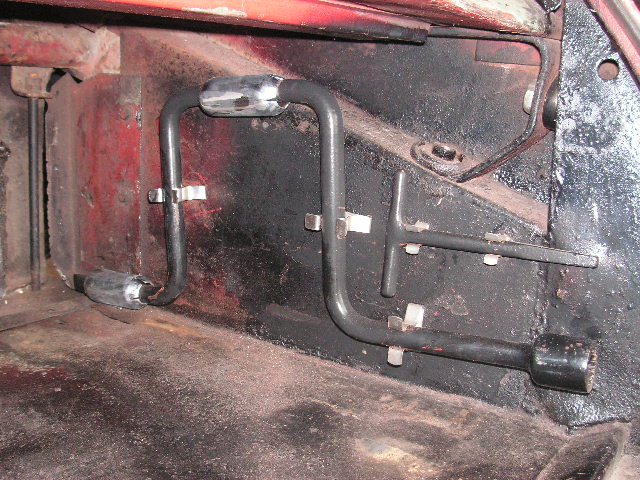 Here are my jack clips. The ratchet handle clips are originals. The rubber socket and loop at the front are original, but the springy clip is new, also from McMaster-Carr. 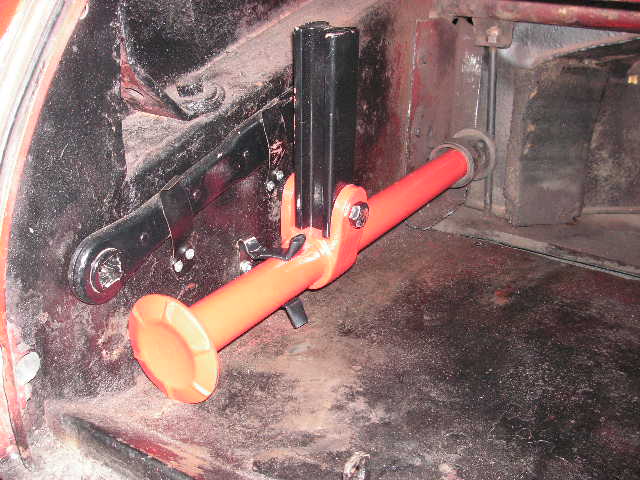 rob,
great photos
I am guessing that the McMasters clip you refer to - there was never anything originally at this point?
The flexible ducting I have not seen the perfect stuff for years but you use to maybe still can buy a cardboared/paper flexible tube with wire spring inside and then paint with a bitumen paint which would get the finish much closer?
terry

Yes, the paper stuff is probably archaic, but you can go to https://www.mcmaster.com/duct-hose
and there are a lot of choices of 4 inch hose.
The tool spring clips on mine were all broken, the spare tire catches on them when you pull it out, so I chose the closest thing I could find.
https://www.mcmaster.com/spring-clips choose style B.

Graham, I found the perfect replacement. It is a heater hose for a Chevrolet Corvair. Wire reinforced black rubber. It comes in a 3 foot length. You can buy it from Clarks Corvair parts Corvair.com. search for heater hose. They offer two styles, you want the original style, not the cheaper one.

Excellent, that C386R looks like the closest you’re going to find.
http://www.corvair.com/user-cgi/catalog.cgi?show_page=101

Cliff,
Clarks rebuilt the euro on our 66 Corsa, must have been close to 40 years ago and they were a GREAT company to deal with! We loved the S2 Corvair’s and at one time there were five of them in the family.

Yep that was supposed to be turbo not Euro!

You can edit your posts, Bob.

That does look ideal. Certainly better than what arrived from SNG Barrett’s. Will get a length underway.

Thanks very much guys.

Hi Rob.
Your wheel brace seems to fit into the clips well.
On mine the socket head makes the brace stick out too far from the bodywork for the rear-most clip to engage fully.
I’ll get a photo.

I have done a comprehensive analysis of all clips/fasteners as used on XKs for securing their various tools, as part of my ‘book-in-progress’ of all SS, SS-Jaguar and Jaguar Tool Kits (1932 to 1979).

The Mark VII SPC that uses the same Wheel Brace, and same clips, albeit located different position, goes one step further and identifies the BD.2385 as a TERRY 80/0.

With TERRY clips, the 80 denotes the STYLE (or Model) of Clip and the /0 denotes its size, given it is a nominal size spring clip, that can accommodate some variation in diameter of item being held.

Now both a TERRY 80 and TERRY 81 are described as being ‘Hardened and Tempered Steel Clips’, the 1932 catalogue advising both being Patented ‘AVECTA’ , but that clarification disappeared by 1938 catalogue, relying totally on the illustrations, which has been described (loosely) as being of the Greek Letter OMEGA shape (which is a stretch, but at least something).
The TERRY 80/0 is 1/2" nominal diameter, which being a spring clip, would suit the 13/16" diameter Wheel Brace Bar. Now I do have a couple of 1951 originals, and looking at them now, they have NO markings at all on them, but a 1955 TERRY 80/4 (1-1/4"dia.) is stamped on side TERRY’S over No.80/4 (I don’t know whether no stamping or TERRY’s stamping is age related, or size/room on clip related). Regardless, see attached photo of a TERRY 80 model clip, loosely described as ‘OMEGA’ shape… 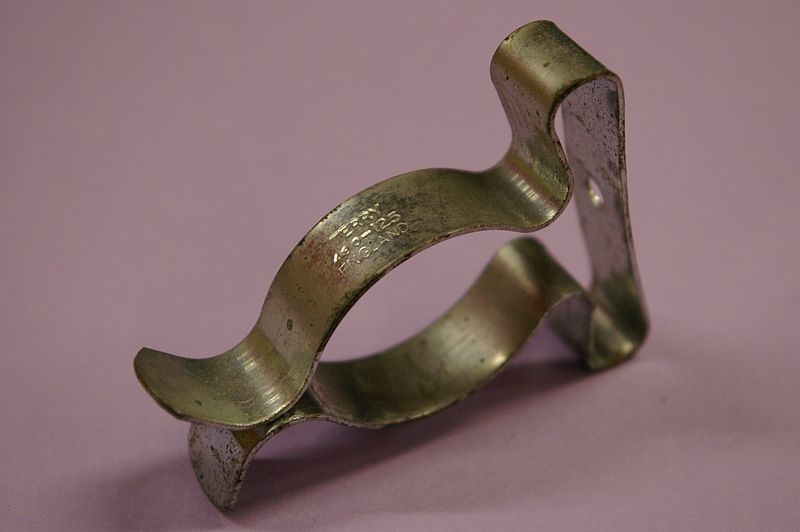 The Model 80/ clips have provision for one hole, to accept choice of one solid rivet, one pop-rivet or one self tapping screw. For XK120 the 80/0 clips are secured onto the spare-wheel compartment with pop-rivets, which I suspect are BD.1814/2 as per those securing the Jack clips (in a similar location, with the clip hole diameter 0.172".

Otherwise my original 1951 80/0 clips are 5/8" wide, 9/16" internal bar diameter (maybe spread a little after 50-60 years holding a 13/16" diameter Wheel Brace, rather than original 1/2" nominal) and have a height from base to centre-line of bar 11/16", which is of course critical regarding your wheel-brace fit problem. See attached photo of a late 1952 XK120 showing three Wheelbrace 80/0 Clips in position - rear broken (and two clips in foreground for Budget Lock Key) 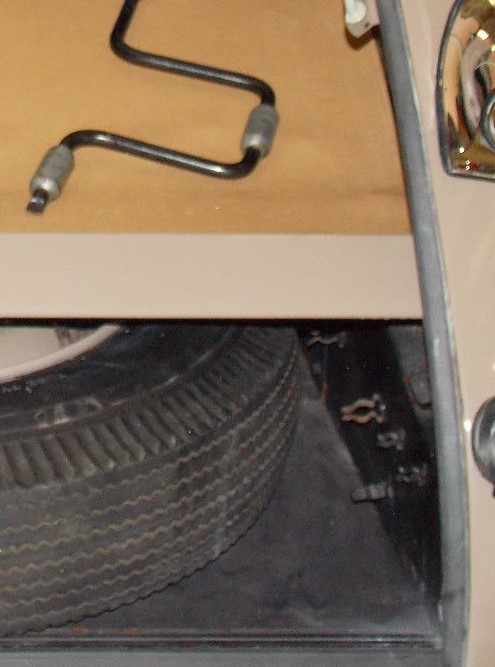 Thanks for the detailed information.

On your photo showing the clips in the RHS spare wheel area it is the rear most wheel brace clip that I’m finding difficulty in it actually clipping onto the brace due to it’s close proximity to the socket end which moves the centre line of the brace out from
the bodywork.

Somewhere I saw a period photo of the brace in position but not clipped into this rear clip and had to wonder if, and how, they could ever fit this properly.

Mine is exasperated at this point by a further 1/8" higher the rear panel of bodywork is, where the socket rests, in comparison to the bodywork the clips are mounted to.

good to see they have named the clips after me
terry

We discussed it several times, but here is a great shot of the padding:

Bid for the chance to own a 1952 Jaguar XK120 Roadster at auction with Bring a Trailer, the home of the best vintage and classic cars online. Lot #30,334. 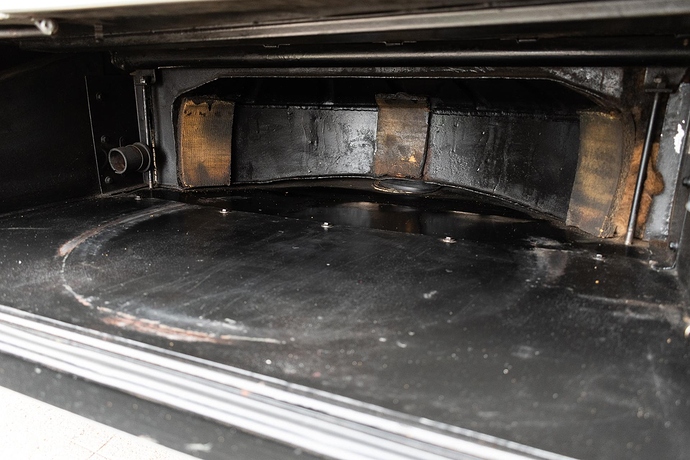 good to see they have named the clips after me
terry 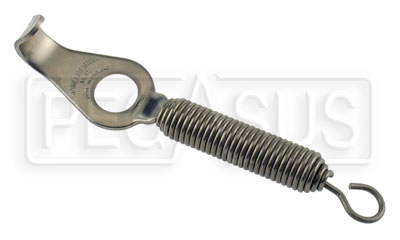