Hi,
As you can see from the picture the master cylinder has a small leak. I’ve looked at the archives, But would like the consensuses of people that went through this. Do I remove the pedal box, or just the master cylinder and do I rebuilt it or replace it.
Thanks Benny 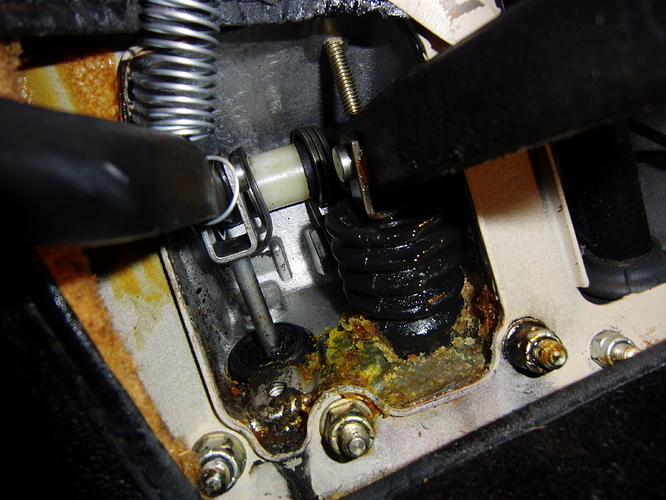 I personally wouldn’t try to do it in situ - too much ‘dashboard limbo’ to suit me.

I used a small pneumatic (impact) wrench to quickly pop off those 5 nuts, the rest of the of the work was simple wrenching done from above.

Getting it out will let you make it nice and clean - plus you can replace the broken clutch pedal spring while you have it apart.

Looks like that cylinder has been slowly leaking for a while and the corrosion of the aluminum pedal box should be removed, so +1 on pulling the box. Rebuild or replace depends on condition of cylinder bore which if worn can be honed, or if pitted can be sleeved and then rebuilt. Get a quality rebuild kit from one of the usuals - all kits are not created equal.

New replacement cylinders are also available at reasonable cost for a safety critical item. Keep track of threaded adapters and banjos at ports and the layout of pipes for reinstallation.

Take out pedal box and do it on the bench.

I would change the slave cylinder at the same time the number of times one has been replaced and shortly after the slave has cried enough!

Thank- you all,
I see that the usual s have 2 different brands of MC a Lucas and Lockheed. Anyone have experience with any of these.

I replaced my leaking MC with a Lockheed; no problems 3 years in.

I’ve had all of my hydraulic bored and sleeved just to avoid any future issues. I’ve used white post but I think others have used apple.

Michael, I used White Post to sleeve hydraulic cylinders in the past but a number of years ago, they quit sleeving alone and just offered rebuilt units and as I perfer to rebuild my own units I went to Apple and have had numerous units sleeved for myself and fellow club members with never a problem. I just looked at White Posts web site and it appears that they will do sleeving alone again.

I installed a Lockheed (from SNG) about 5 years ago with no troubles, I use Castrol GT-LMA Dot 4 fluid and flush it every other year.

I also second the removal of the pedal box. Replace the Clutch master and all the springs while you are there. It may seem like a pain to get it out, but its still a lot easier in the end.
If you get stumped just ask here, there are plenty who have done exactly what you are facing willing to answer up

On a 4.2 I’d replace it, reason being that I think you can, with a very good if not perfect one. So I think it would be better to take advantage of that while you can. We 3.8 owners don’t have that luxury as the Lucas/TRW cylinders are close to original but still require modifications. I’d definitely retain and preserve the original in case you need to rebuild it later though.

I also second the removal of the pedal box. Replace the Clutch master and all the springs while you are there.

Thanks all
As it stands now I’m thinking of just removing the MC from the top, see if I can open it and if a repair kit will do. If not I’ll buy a new Lockheed or send to Apple Hydraulics. I think that the small leak is from the seal and the MC is in good shape .
Benny