Let it burn and collect insurance?

Saw this on ebay today and it got me thinking. If it were my car, insured or not, I certainly will not be waiting for the fire dept. to show up and put out the flames. I’d go at it with everything I got. I keep a small fire extinguisher in the car too. When the strombergs flood, they’ll fill up half the air cleaner before a noticeable drip outside. I try to be vigilant and prepared for such things. 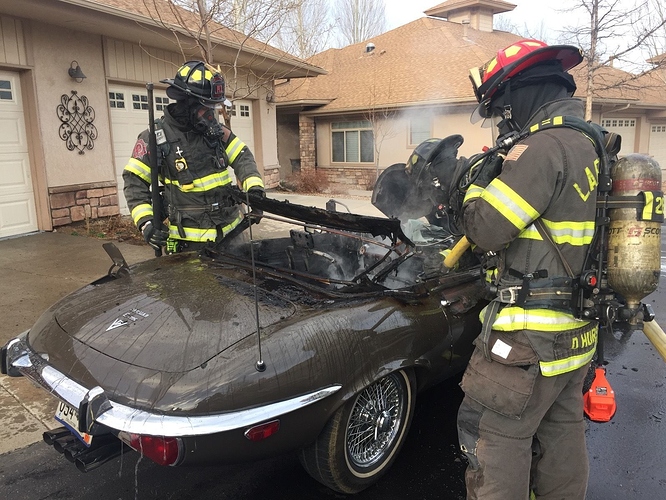 Recently converted to fuel injection, this roadster had a fuel leak on the passenger side and I was happy to get out of the car and wait till the Fire Dept. arrived.

Perhaps this is a new way of selling classic cars, insure high and watch it metaphorically (or in this case, literally) burn. Obviously we don’t have all the facts here. But just curious to see what you guys think of it.

It depends if the car was insured for much more than it was worth…Headlines could be reading…“car blows up killing a man as he tries to put fire out”
So easy to second guess when one is not there.
Abe

Every one of us should have at least one fire extinguisher on board, easy to reach and know how to use it.

Halotron costs a bit more than a the usual ABC chemical spray but will be much kinder to the car. I think this is a pretty fair deal (no financial interest):

Until such time as the tires explode, most car fires are pretty tame and a good extinguisher can save the vehicle. I know I would try.

Hi George…love the add for a fire extinguisher !! May I add a thought …GARDEN HOSE !!

Now that’s what I call a good project car !
John

When my brother and I drove my '62 home from Brisbane to Sydney (~1000km) our first stop was to buy fuel, 2 litres of 20w50 and a fire extinguisher - which is still in the car. I could not let it burn! This would particularly the case if I had not advised my insurance company of the fuel injection modification - and hence not had it noted on the policy. A different risk to the low pressure carb installation? Paul

In 2007, I lost my '78 Spitfire due to an electrical fire that started in the fuse box on the bulkhead inside the engine compartment. The flames were about 8-10" high when I lifted the bonnet and a fire extinguisher would have saved the car. I didn’t have one and the fire spread to the oil-soaked tunnel and into the passenger compartment, completely destroying the car. Lesson learned and I now carry an extinguisher in the E and my daily driver. I guess the silver lining is that had I saved the Spitfire, I seriously doubt that I would have bought my E a year later.

Decades ago, my then teen age son was welding under his Ranchero. Ooops, Gas leak caught fire, but good!!!
It was night, I in my pajamas. I looked and saw the fire, he had the garden hose going. I called 911 and ran out. The car was backed in almost into the garage!!! No keys in my pajamas!!!
But, one of his pals was there with a little 4WD truck. I grabbed a chain and got him to back up to it. A quick wrap and
“go”. Ranchero jerked off the rear jack stands and down the drive. Fire truck pulled up. The station being about a 1/2 mile away. Quick, out with a hose and fogged out the burning puddle of gas. The Capt. checked out the interior and opined, that it was hot and combustion not that far away. Indeed, a plastic stud finder and some other plastic tools had deformed!!!
Very close call…

Very good point. Open one latch, run around to the other side and open that latch. Then lean over the bonnet with maybe flames pouring out of the louvers and stick your hand in there to release the safety catch.

I’m not sure I’d be trying to open the bonnet.

I carry a powder extinguisher in all my cars. Big enough that it has a steel bottle.

Why powder? Because if you are in conflict situation with someone, a dash of ABC will generally stop them from doing whatever it is that they are currently engaged in doing. It also makes them relatively easy for the Police to identify afterwards.

Why steel? Because if the dash of ABC isn’t enough, you can also bonk the assailant on the head. You can also break a window with a fire extinguisher, if someone is trapped in a car.

They’re also pretty effective for putting fires out. If you’ve never used one, learn how to. Some fire depts do courses.

If it were my car, insured or not, I certainly will not be waiting for the fire dept. to show up and put out the flames. I’d go at it with everything I got

One problem with that approach is that if you succeed in putting the fire out you end up with a car partially burned. Fire can have interesting effects on metal, etc. You may never get the car back to the condition before the fire; however, if totaled, you can buy another one, hopefully that has not burned. 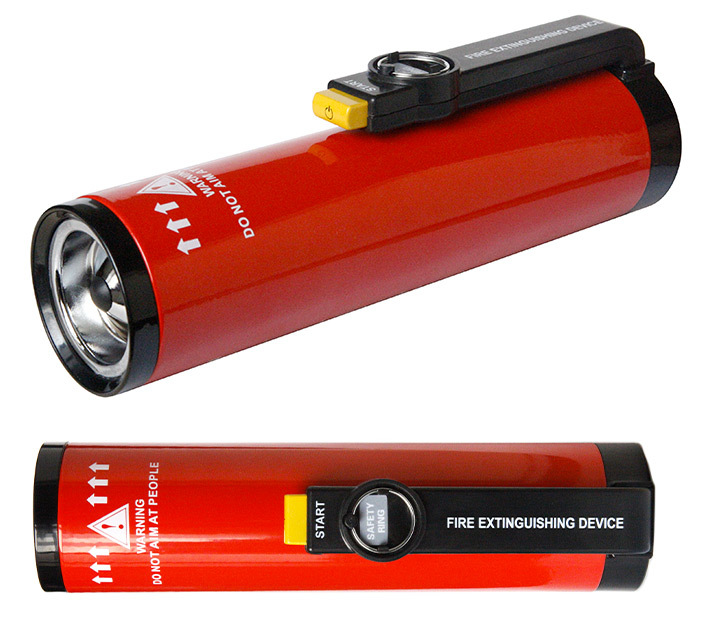 You may never get the car back to the condition before the fire; however, if totaled, you can buy another one, hopefully that has not burned.

Well, I guess I can do something while waiting for the fire brigade…

In my other vehicle which is known for igniting itself I installed one of these: 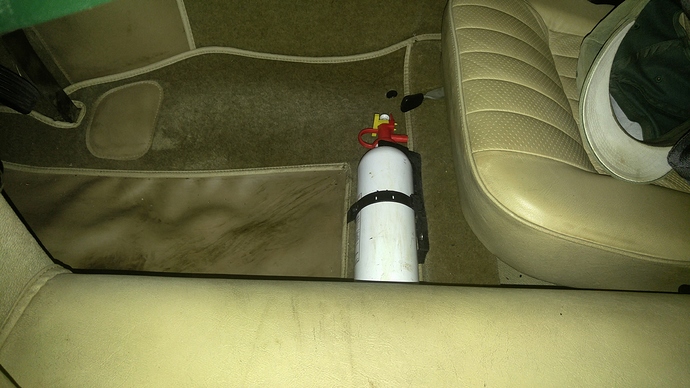 Two Marine dry chemical extinguishers fit nicely in front of the seats. The holders screw into the ridge under the seats. These are typically used in “jet ski’s” and do not interfere with ingress/egress
Helps hold the carpet down too! His & hers, red & white.
Get them at West Marine or a PWC dealer.