LHD vs RHD torsion bars - anyone know why?

So the UK, Australia, Japan, Far East, India etc had different torsion bars to LHD countries such as Europe, South America and the States. Were Jaguar penalising them for driving on the wrong side of the road?

Surely you meant the correct side of the road for Australian et al delivered cars Jaguar being a British (RHD) built make.

I would guess at the answer being about weight distribution and subsequent handling. A LHD configuration no doubt changed various elements of the original handling.

Well, certainly for the 2+2 models, it was because of the increased weight.

I’m in the UK so RHD is correct for me!

Can’t think of anything that would change weight distribution and it was obviously not considered an issue on the S1 cars.

I am only guessing but isn’t the fuel tank on the left. I always imagine designers put fuel tanks on the opposite side to the driver to offset their weight all else being more or less equal.

Maybe, but they stiffened the front and left the rear alone. Wonder if they were trying to raise the front to comply with US regulations but then why do it for the rest of the LHD world?

That would equally apply to RHD cars.

Perhaps they felt some locales preferred a stiffer ride?

That would equally apply to RHD cars.

No A/C on RHD cars as far as I know. That said, the main reason the US cars were heavier than the European cars in the S2 era was probably the extra weight of the Americans…

It’s amazing that folks like @Heuer continue to find new interesting unanswered questions about the E-Type. Kudos to him, and I look forward to hearing an explanation. I presume that a search of the Service and Spare Parts Bulletins came up with nothing - presumably because the change was made at the start of the new model (Series 2) run?

In the 80‘s I shipped a few Mercedes to family and friends, had them converted to US Spec - as far as possible. It‘s incredible the differences the manufacturers built in to „the same“ car for a different market. The A/C and especially the radiators were a total different beast. Not a legal problem but the US cars were made to much higher spec - because of the overall hotter climate.

Here’s a thought, though it really is a US issue, rather than LHD per-se. I’ve seen posts here in the past on the subject of setting the TBs that have said that they could not set their old TBs up to gain the required front ride height (using the setting link method) because their bars were so weak that the lower A-Arm could not be rotated low enough (physical limitation) to get to the point where it needed to be to insert the unloaded TB and get the required ride height. They were forced to replace the TBs with new (possibly larger diameter) TBs. I think I recall @Erica_Moss having this issue? This reflects the fact that there is a limited range of motion of the lower A-Arm, and with the weight addition of A/C in LHD S2s, it was getting to the point that it was physically impossible to install the TBs in a “relaxed” state and still get the required ride height dictated by the US headlight height requirement. Stiffening the TB somewhat would overcome this. It’s worth noting that there is a Service Bulletin J.25 dated Feb 1969, that requires Service departments to re-acquaint their staff with the correct procedure for setting the front ride height to get the required headlight height above the road. It specifically sets different setting link lengths for cars with and without A/C. Perhaps the headlight height regulation was the trigger that forced Jaguar to stiffen the TBs enough that all cars could be set up to comply with a full fuel tank etc?

All I can find about the change: 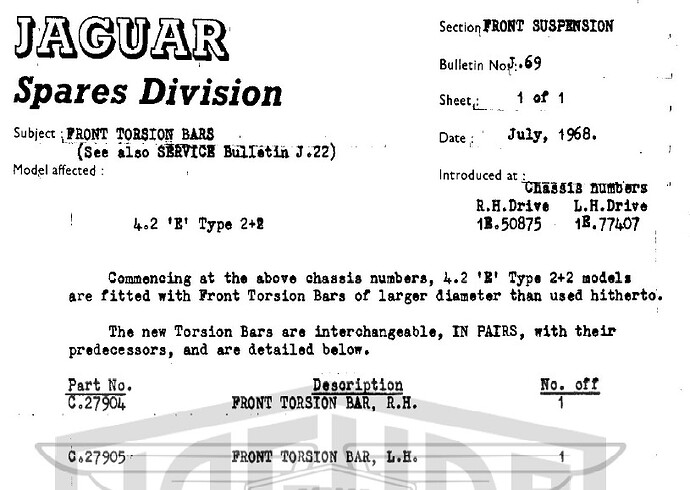 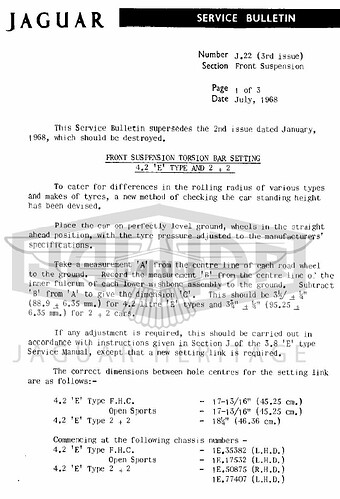 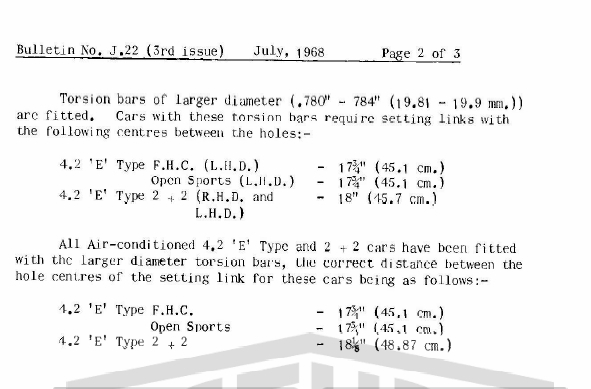 Seems to be related to different tyres and/or air con.

I had a friend stationed in Germany who brought a jag back to Canada. He told me it was illegal to import one with the the high speed gears so he wasn’t able to do it . Had to have 3.54

I think I recall @Erica_Moss having this issue?

Yes it happened with my original ones, marked upon removal, off the car for 1.5 years, reinstalled correctly, car was almost on the ground after a block drive. Set up again, and again sagged, took a bit longer, set up again, still eventually sagged. My theory is that they unwind after sitting and maybe after many setups they can be brought back to correct but it isn’t worth the hassle.

I replaced with new standard and they lasted 24k miles before the same thing happened. I then installed a .86 set. I doubt they will ever run out of adjustment.

Interesting thought process, and at first glance, it certainly seems like it could be one of the reasons, if not the reason for doing that.

What is shown in the early SII illustrated parts manual shown above is correct with one caveat. What’s shown came from the latest original, typed parts list sent to the dealers. However I went back and did some additional research. When Jaguar refined the SII parts manual in 1979 and 1986 they split it in two – one for SWB (RTC9873FA) and one for 2+2 (RTC9874FA). These were only available on fiche. In the SWB one (1986) they added a note to the C.9331/C.9332 torsion bars saying they were for RHD SWB cars, but only up to 1R.1775 and 1R.20954.

This is reflected in all S2 illustrated parts manuals printed since 2008.

Interesting to note that the new Torsion Bars available today from SNGB (Part# SBS9012) are 0.86" diameter (thicker than both the C9331 [S1] and C27904 [S2]) and are described as “uprated”. Both of the original part numbers are listed as being superceded by the new “uprated” bars, so I presume that means you can no longer get replacements with the original characteristics. It also means, presumably, that the setting link dimensions from Jaguar are not applicable to the replacement TBs…

I read that the new rear springs are also somewhat stronger than the originals - 70% stronger?

That would lead people to believe they had needed the new springs which give a much firmer ride which of course is very noticeable, discrediting the original springs even if the they were still perfectly fine. Just a guess.