Liftoff! (getting an XK120 OTS body up in the air)

Alan Dell ('69 E-type OTS) and I spent a pleasant couple of hours this afternoon lifting the body off my '54 XK120SE OTS. 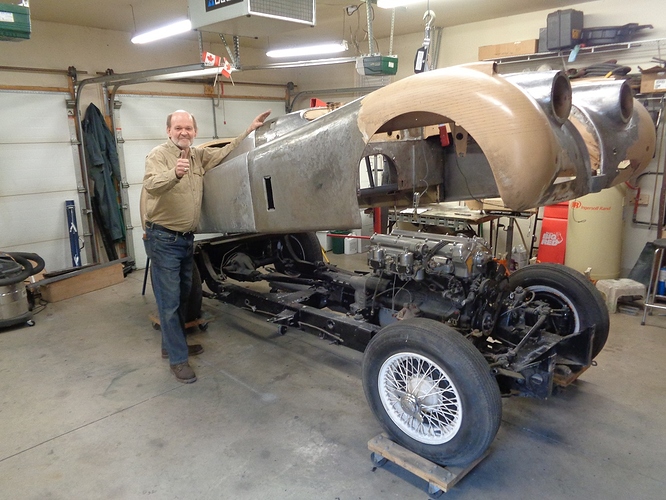 And, yes, this one here was taken before we hit the bar. 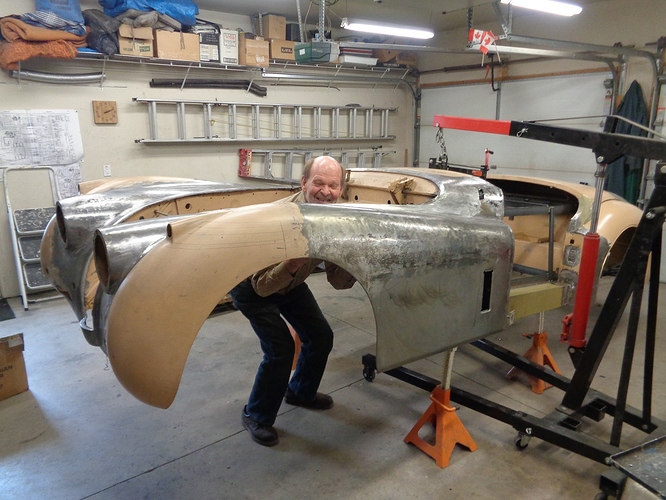 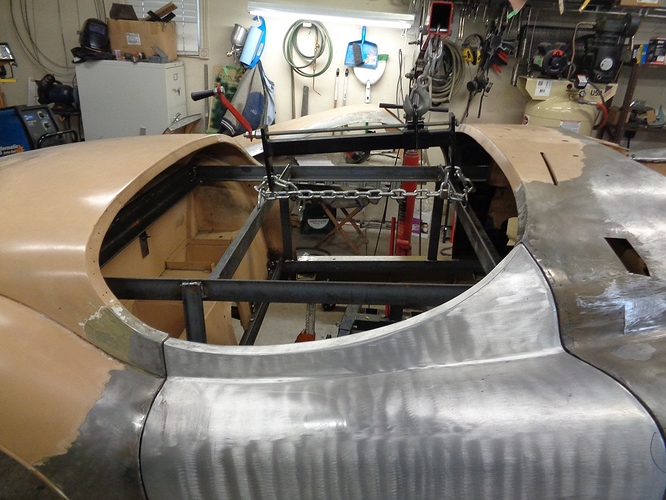 now awaiting the next phase 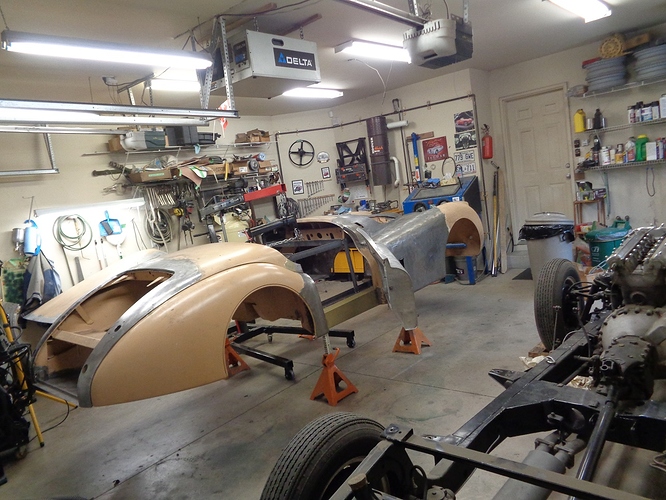 I was planning to build a rotisserie around it by repurposing the one I built for my E but I’m now leaning toward a - whatever you’d call it - a tiltisserie? that’ll be easier to construct and more sturdy. Now need to calculate out the COG then raise the centre point just a few mm to gimbal the weight toward the bottom a hair. 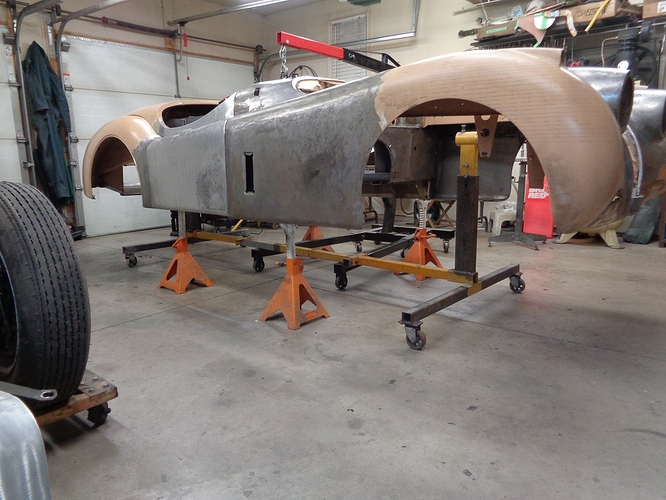 Sir Nick,
I am so incredibly jealous of your infinite knowledge, but maybe more so of your wonderful shop facility.
Thank you for letting us share in your wonderful project.
Phillip

Maybe you can run for il Papi, using this guy as inspiration…

The Jag can provide the white smoke…

Nick , how about “Inclinator” . A tiltisserie sounds a bit " Page 3".
English friends will explain!
BTW why a shortage of body lead over there, is John Wayne to blame?
I am at a similar stage with my 120 but I am making the door fit the hole
not the hole fit the door.
Peter B. 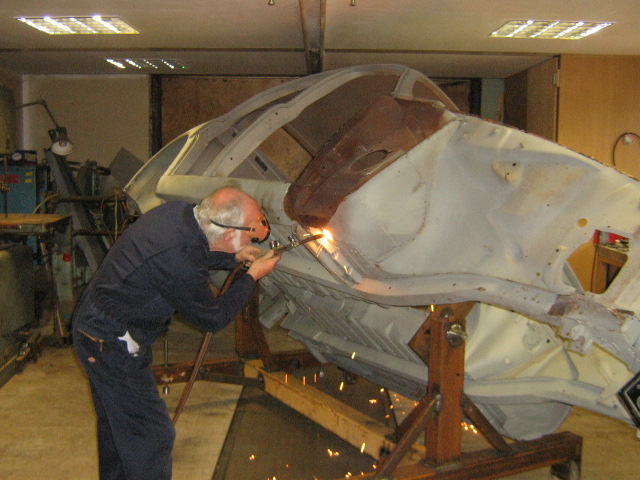 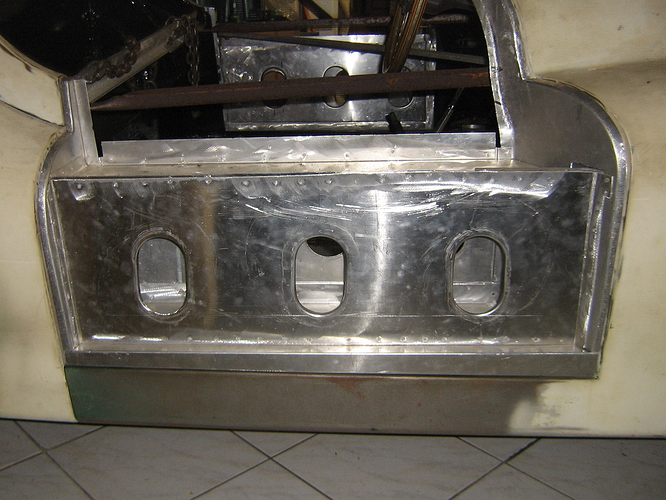 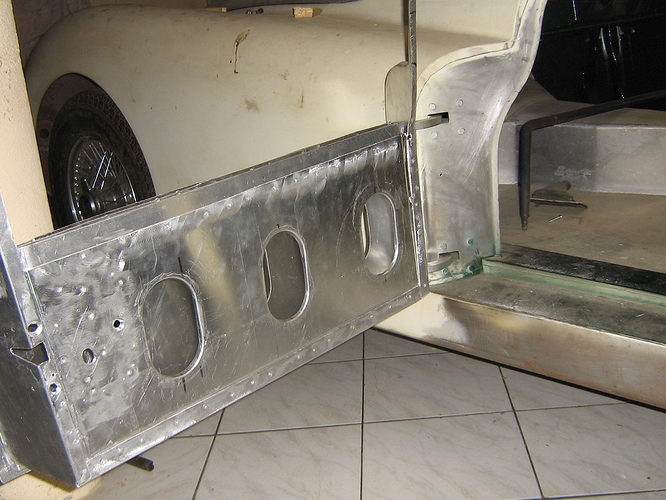 Just WOW to both projects. Great skills guys. PLEASE keep the progress photos coming. My 120 has just gone off for suspension alignment then its should be ready for the road!!
photos to follow.

Yeah. One might be more inclined to inclinate one’s 120 on an inclinator, I suppose, but I had to look up “Page 3” …

Page 3 is a former feature in the British tabloid newspaper The Sun of a large photograph of a bare-breasted female glamour model which was usually printed on the third page of the print edition. Such a photograph first appeared in the newspaper on 17 November 1970 and on the official Page 3 website in June 1999. The terms "Page 3" and "Page Three" are registered trademarks of News UK, parent company of The Sun. However, the feature has been imitated in Britain's other "red top" tabloids and by...

But! That’s precisely what I have in mind, except out of steel. If I position the uprights in the axle locations it will be possible to tilt the body a full 90 degrees. Today’s objective is to figure out how to do it.

BTW why a shortage of body lead over there, is John Wayne to blame?

As Gary Grant said in the solder thread, it’s a matter of demand - it’s dwindled to the extent that the autobody suppy stores don’t bother carrying it anymore, and the one mail order supplier who sells small quantities is currently out of stock. However, Gary provided a tip where I can find more if I need it, at Max Auto, though the nearest store is a half hour away.

Will do, Phil. I expect to have the Inclinator © completed by the weekend.

How do you like the Delta air filtration system? Do you find it effective?

Hi Nick looks good,I remember a video clip you did on this car,you were in the process of forming what looked like half a front fender,how did that go?

How do you like the Delta air filtration system? Do you find it effective?

Yes. Indispensable. Bodywork is incredibly dirty, especially grinding which generates all manner of black grit and dust. Bad for housekeeping and bad for your lungs. My shop is attached to the house, which makes it worse. The protocol is the Delta goes on before I start grinding and stays on for ten minutes afterward to insure a complete air change through the filters. Also when grinding I’m wearing coveralls that leave the shop only for cleaning and I’m wearing an air supplied respirator.

Hi Nick looks good,I remember a video clip you did on this car,you were in the process of forming what looked like half a front fender,how did that go?

If it’s the video I’m thinking of, Gerry, it was a gag for the benefit of a couple of listers at the time, otherwise it went fine. One of the reasons I’ve pulled the body off the frame is to get better access to the lower front wing panels to tweak their almost flat crown.

Nick, I haven’t seen a garage that clean since I moved into my house 20 some odd years ago. It now resembles a proper blivet without ANY flat space.

As for lifting the FHC body, I’m afraid I’m too age compromised to do that AND I don’t know four or five other blokes who aren’t. I left it on the frame.

(Well, since my spellcheck lit off I decide to see if I spelt it correctly. Turns out the classic definition of 10 pounds of poo in a five pound bag wasn’t even on the first page. It rattles on about all manner of useless objects, but not the one I’ve ALWAYS known about.)

It now resembles a proper blivet without ANY flat space.

I finished fabbing and welding in the rotisserie brackets today as well as establishing the COG for positioning the shaft. That’s tomorrow’s objective. As for tonight, rumination. A favourite part of restoration for me … a glass of wine and a few minutes pondering what comes in the morning …

I find myself doing the same thing. Often at odd times in the middle of working on the car. Only difference is I am holding either a beer or a scotch instead of wine. It is really an enjoyable part of the journey.

Nick, that is one of my favorite car songs. I have spent too much time thinking about what model car he is referring to…grease gun, carburetor, overdrive…not inconsistent with an old Jaguar.

I find that no matter what project I am working on, when I begin making mistakes and screwing things up, it is time to step back and take a break, before I accidentally damage something or hurt myself.