Longest Trip on Your Saloon

Typical longest journey for our car in a year might be 150 miles in a day for a touring car rally e.g The Candles Run around North wales and Cheshire. In the period 2000 - 2005 I used to visit the wife to be in Wirral every weekend from my home in Lichfield - around 100 miles each way. More often than not the car doesn’t do more than 10 miles in a trip nowadays.

I managed 900 miles from Somerset to Aix en Provence in 2 days. I was on Dutch plates, a British MOT and French insurance, but no break-down cover. I was thrown off the channel tunnel for “smelling of petrol”, when the starting carb started spitting back, but managed to plug it up and get on the next one.

I managed the return trip some 2 years later - still on Dutch plates, but with a French Control Technique and British insurance - still no break-down cover so stressful, but we made it. The kids still tell me that the MK2 is the most comfortable car to do a long trip in.

When mine arrived from Sweden , I drove it two hundred yards that was 18 months ago , nothing since then . But I read that you guys spend half a lifetime restoring your cars , so what the heck ,onwards and upwards eh ?

Hello, happy to report that the MarkX traveled over 800 miles over the weekend and brought home second place in the division at the Keels and Wheels Show. 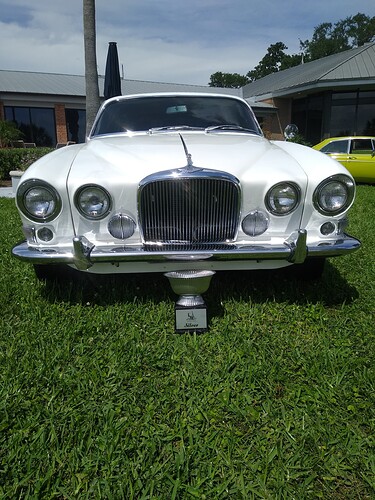 Gee, well done and that’s a big showy piece of silverware! Did the winner have to trailer their’s home? Pleased the car went well for you.
Once you’ve owned them long enough to sort and understand them they become quite reliable.
A few spares and the workshop manuals and I would go pretty much anywhere in mine - even the Morgan.

Back in the late sixties I drove a $50 mk7 from Long Island to Omaha at the beginning of the school year and in the spring a few years later drove it back to Long Island. I went straight through for 24 hours to average 50 mph with stops. Also drove my 140 OTS the same route a bit earlier. I get into the 140 today and I can’t believe I ever had the balls to do that. I was young. I was a student. I still wonder what my father was thinking when I did it. He kept quiet each time but I suspect he planned to bail me out with air fare at some point.

That’s so funny. I also think back at the courage or was it stupidity, I don’t know.

In September 1970 we decided to spend one or two years working in England. So, we packed our belongings and drove our Jaguar ‘S’-type, which we had picked up at Browns Lane Sep. 1, 1966 (and a Ford Station Wagon towing our Lotus Elite), to Wenatchee, WA where my father lived, 2,490 miles. The ’S’-type was carefully and thoroughly prepared and placed in a dark dry garage.
One or two years turned into eight (with two of them in West Africa), but that’s another story. We returned to the USA and, in 1980, drove our now thirteen-year-old Jaguar ‘S’-type, with only 11,000 miles on the clock, 2, 817 miles from Wenatchee to Pennsylvania. The trip East was made on the 13-year-old New York license plates and was relatively uneventful with only a petrol pump failing, thereby requiring more frequent stops for fuel, as each of the separate twin tanks holds only eight US gallons and has its own independent petrol pump. This was not a problem as we took a week for the trip stopping at sights such as the Badlands, Mount Rushmore and others.
In the ‘90s, we were active club members and drove to events north to Maine south as far as Washington DC add west to Pittsburgh.
Now, the ‘S’-type is driven once a week to the Coventry Foundation, 45 miles each way, where I volunteer and to local car club events. Last weekend we drove the ‘S-type on a 450-mile round trip, towing our 1928 BSA, to join 235 other British cars at “The Gathering” at Shelton Vineyards in North Carolina. 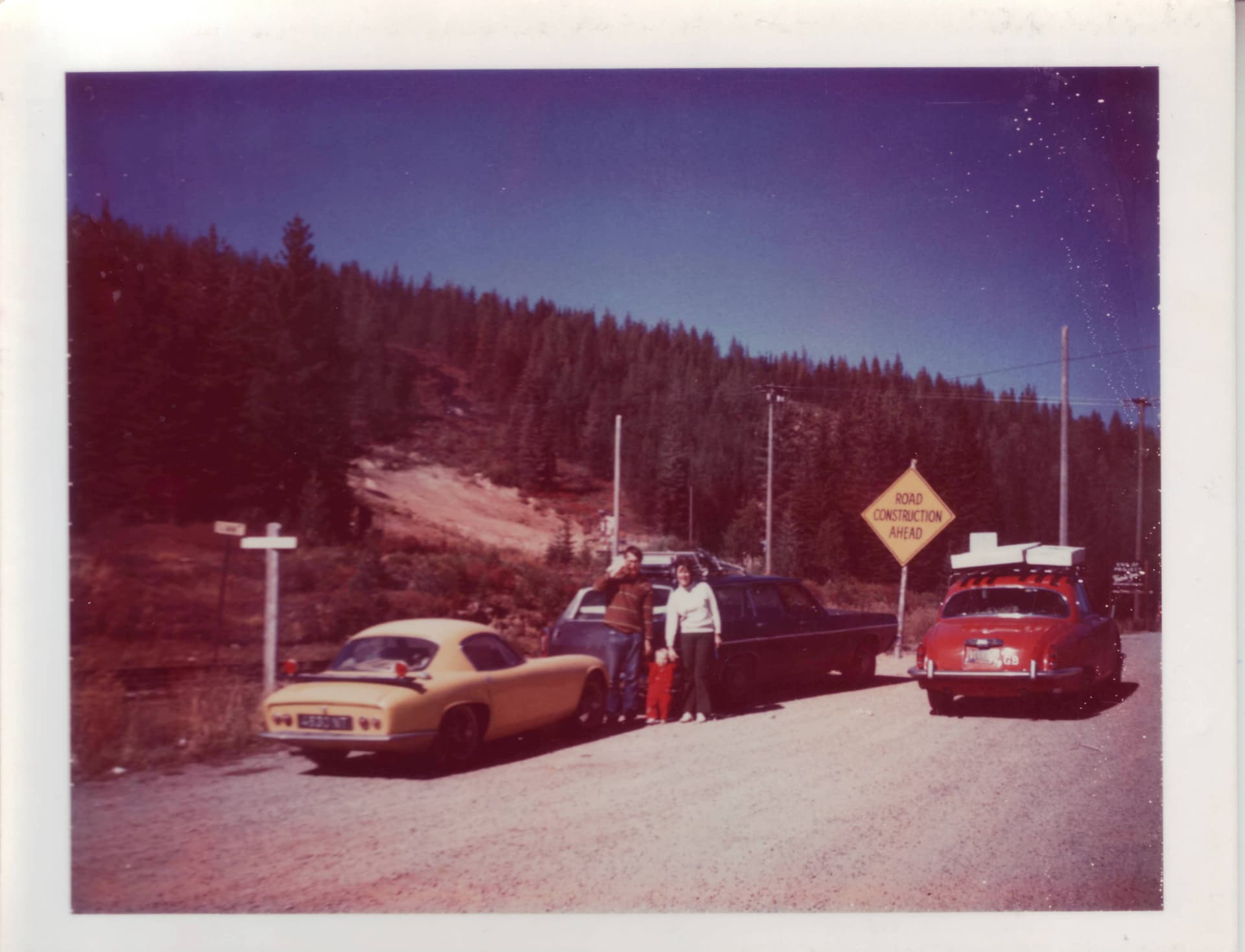 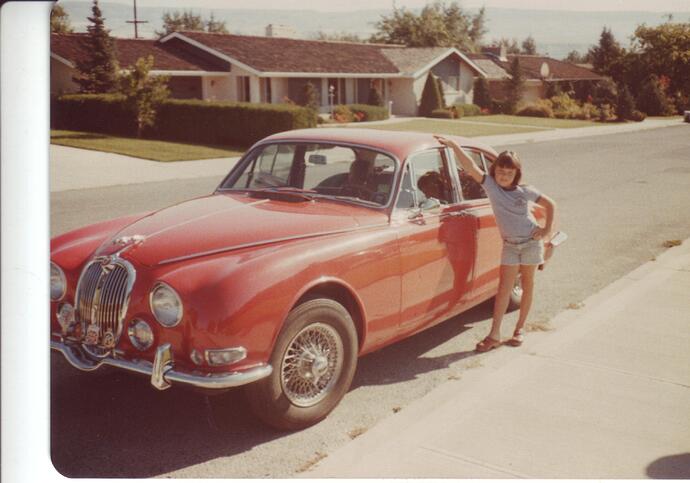 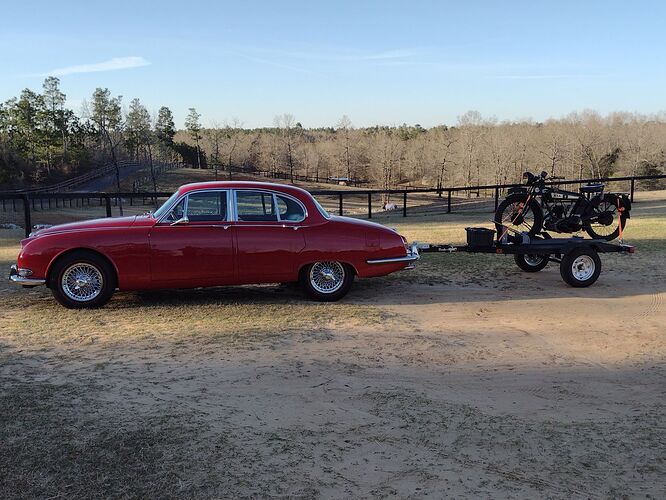 Hi Cackle,
I have alternated taking one of my two MK IX’s to the British Invasion in Stowe, Vermont every fall for the last 20 years (with the exception of 2020 when cancelled for Covid). That’s a 240 mile run each way and we usually do a tour around the area adding perhaps another 100 miles, so around 580 miles total. The roads vary from highway at 70-80 MPH to twisty and hilly roads around mountains and rivers. My brother’s 120 DHC is in front of me in this picture. 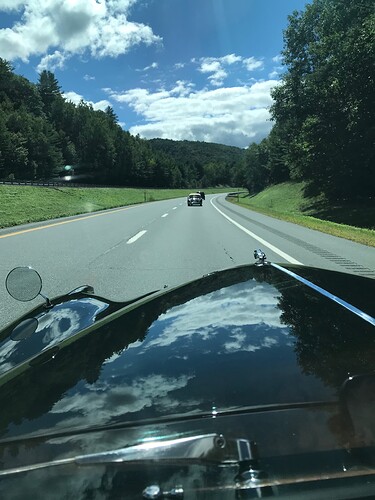 The longest run I have taken was to South Jersey to Mike Eck’s new house, 360 miles each way in 2019. We added another 100 miles or so touring in a group called the “Brigadooners”, so that trip was around 820 miles. Here is a view from the rear seat while we took a tour to a local WW2 airfield. 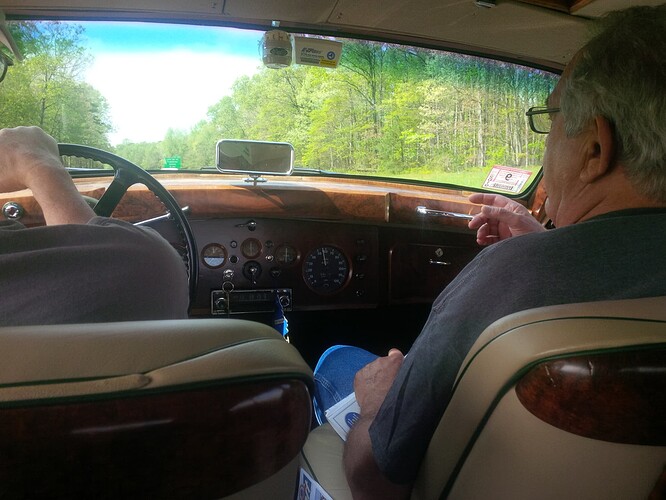 Driving these cars is what it’s all about to me. I take one to Lime Rock Park in CT each June to the Empire Cup Vintage Car races and camp at the track for one night with like minded friends. Good luck on your trip to Seabrook and certainly let us know how it went. 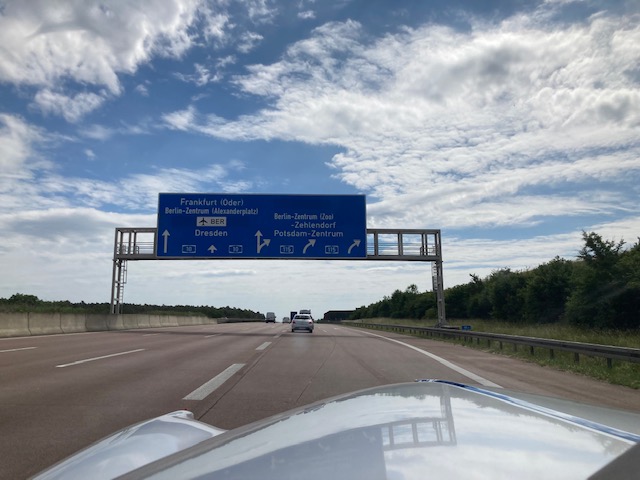 Starting a trip from Cologne to Berlin, wonderful weather and perfect running car over 550 km.
Driving back in the evening, fantastic running car, 140 km before arriving with loosing gear-oil from the BW. Saving fuel by using the Yellow-Cab 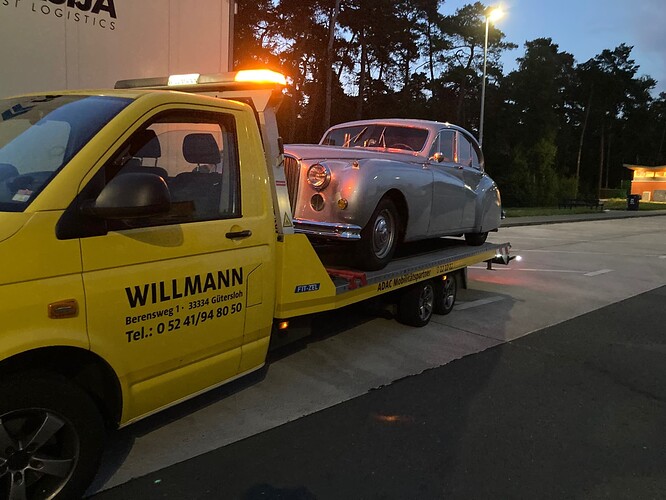 Reminds me, years ago my Mk 7 broke down 500km from home & I had to hire a trailer to fetch it. Towing with my Audi 500 it used less fuel towing the Jag on trailer than the Jag would have used on it’s own.

17,5 litre (gasoline :-)) per 100 km with the JAG.
Engine-oil: not much.
The highway was free and the MK7m runs highspeed over two hours. That was too much for the gear-oil and gasket. Now I decide to build in an oil-cooler for the gear-box-oil.

300 miles round trip in my 420. It cruises nice with overdrive. Wouldn’t mind AC and cruise though.

Leaving on Friday 24th in the Mk VII for a 2500km round trip from Johannesburg to Fish River canyon in Namibia, wish us luck.

Pictures, or it didn’t happen!

You got the lingo right.