Another blast from the past here. Left jag-lovers a while ago after selling my XK project and my 3.8S Sedan. And gave up my list/web admin duties at the same time (XK web, Lumps)

Looking for info on two cars that my brother and I are considering purchasing.
Both are / were on Bring a Trailer.
This 120 did not meet reserve, just trying to get more info if anyone on here knows this car:
Chassis: 671529
https://bringatrailer.com/listing/1951-jaguar-xk120-roadster-8/

Anybody know these cars well?
And a corresponding question, if anyone knows of a nice driver (#2 or #3+) that’s for sale, we’d be interested.

Hello Ted, I wondered what had happened to you after we lost you as admin.
The 120 looks pretty good, although I don’t like white cars, but that is just personal choice. Otherwise there are a few things we could ding on concours points, if you cared to open up that can of worms, but maybe you don’t care about things like that.

I was following the 120. Looks like a nice car. Fairly accurate. Looks to be a #2-/3+ condition. Some areas painted body colour where they should be black. A couple of commentators dropped the $200K figure when speculating on value - wildly optimistic even for a #1 car, which Hagerty puts at $161K. Interesting the final bid is almost exactly what Hagerty values a #3.

671529 on BAT: many photos: seems to be a quite correct OTS, not a SE, very minor discrepancies for the concours points, but a nice one if you like white…$84 was the hi bid…reserve not met…many comments thought it to be a $100K car…just shows on any given day depends who wants one. I find BAT shoppers to be savvy bargain hunters…unless a car is exactly what they want…I have mentioned in other threads that sometimes a person with off shore bank accounts see one…up close and personal…and just has to have it…then the offers…even when the car is not listed for sale…soar…maybe even to the top Haggerty 161K…a few have gone well beyond. Just depends. The photos for this car are worth a look. Nick

I’ve been advised if I ever want to sell either of my old Jaguars to park it in the lot during one of the Toronto International Classic Car Auctions., attend the event then return to the car to find a collection of business cards tucked under the wiper blades. The organisers, of course, don’t like folks doing that and explicitly ban “For Sale” signs in the parking lot, but apparently you don’t need a sign anyway. Not saying that’s what I will do, only that I agree with you. Some moneyed guy from out of the country sees a well restored XK in the flesh is apt to be smitten by it.

I have had exactly that occur at a hi end collector auction in Calif…no for sale sign…just parked, came to find several cards and notes…and one gent that I met in person…he was from Texas…had purchased several cars…had one more spot in the hauler…and really really really wanted my car…offers went up up up…(by the way…I give kinda the same advice to attractive single women looking for a man…forget the bars…go to collector car auctions…many offers likely.) Nick

Nick;
I have NEVER had an “attractive single woman” offer to buy me an antique/classic car!!!
Charles #677556.

I have NEVER had an “attractive single woman” offer to buy me an antique/classic car!!!
Charles #677556.

I did it the other way round…It worked !! She was a bombshell too !. Nick

Thanks for the warm welcome back! Its good to see that a lot of the old gang is still hanging out here!
Life changed a lot, which is part of the reason I sold the XK.
In a much better situation since then.
Living in Atlanta and playing with cars still (mostly old VWs).

Back to the topic, we are a serious XK120 or XK140 purchaser.
Preferably an OTS and probably actually lean towards a 140 at this point.

We’ve had continued conversation with the white 120 I originally asked about on BAT, it’s still a possibility but not in a terrible hurry.

Thanks again for the welcome and any leads appreciated!
Ted

Charles, you’re getting slow! Original post : “My brother and I”.

And he has the means and is very generous with sharing his toys.
He also likes to do stuff like this:
https://bringatrailer.com/2018/04/21/bat-auction-success-story-15-year-old-daughter-learns-to-drive-in-a-1961-buick-le-sabre-on-3000-mile-road-trip/

For perspective I tend to play with much less expensive toys, like VW Ghias and Sciroccos, he plays with 60’s Porsches.

Ted U;
“GETTING” Slow??? Hell, I’m getting downright Seee-Nile…
I went back and re-read your first post… Not Once, Not Twice, BUT several Times before the phrase “Brother and I” even registered!!! I must be getting older!!! (I’ve been “old” for a while. and every year it just keeps getting worse!!)
Charles #677556

Hello Ted !! It has been a long time, my friend. Are you still Tampa based ? I moved about 15 years ago to the mountains of NC. I followed the 120 on BaT and was disheartened at the final bid. I thought that car should have cleared $100k . Yes, there are a few little detail things to put correct for judging, ( as if I put any stock in JCNA !:-)) but easy and nothing major. Of course, Appleyard & I both like white XK’s :-))

I recall fondly our drive around David Island and I think you told me that was the first time you’s driven an XK120. Whatever happened to your brother’s Morgan that was parked for so long in the Harbor Island parking garage ?
If you ever find yourself in Highlands, NC, give me a shout. The black FHC is now up here as well, while my brother’s BRG DHC, and BRG FHC remain in Tampa.
I wish you the best of luck in your search, and I really do think the white 120 is splendid, although the domestic market on XKs has been very soft lately. Its a shame that so many people don’t know what magnificent machines these XKs are,… or know that they are the best ever ! Cheers, K

Jim you can use the private message facility on J-L. Tap on Teds avatar on his post and you will see this; 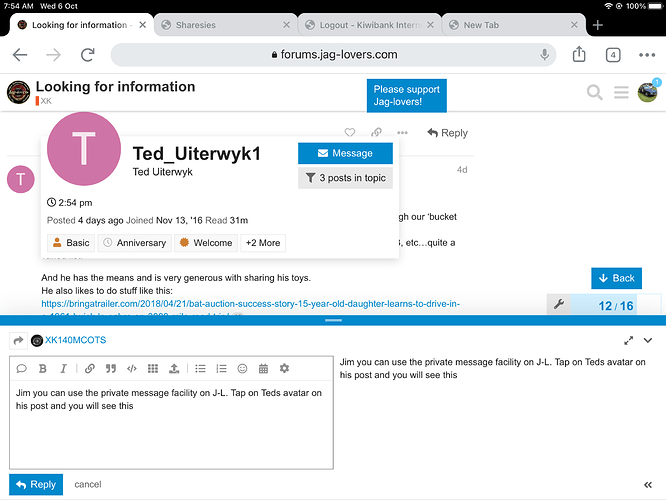 Hey Knight,
It has been a really long time I agree.
I haven’t been Tampa based in a long time (like High School) but still frequently visit.
I’m currently in Atlanta, just down the road from you, have been here for 10 years +/-.
Highlands is not that far for sure.

I certainly remember the experience of driving your car. 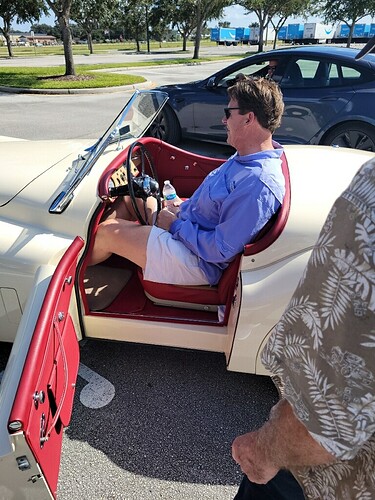 If nothing else it’s nice to reconnect with all the old timers here!
Ted

Send me a message or email me at ‘my first name’@‘my last name’.com

Thank you Robin, I am still learning what all of the icons are for. Jim