I’ll probably end up working off jack stands but maybe I’ll spring for a portable lift. The garage I’ll be working in isn’t tall so low to mid rise is all I can use. I used to have a Herkules pneumatic platform lift for my 911. It worked great on a 911 but with that massive platform, it’d wouldn’t help much on an E-type.

I’ve read some terrible reviews of the max jacks which is too bad. I think they’d work well. I’m thinking about something like

BendPak’s low-rise lifts are your solution for quick service and increased productivity when servicing today’s passenger cars and light trucks.

As long as I’ve got enough height to drop the diff, I’ll be happy. Being safe also makes me happy.
Thanks
Dave

I have the Bendpak mid-rise lift. It is a good quality product and I use it a lot in my garage with 8’ ish ceilings. Mine has 4 arms. With the Etype I struggle to find good jacking points. You don’t really want to use the sills if you can help it. The arms will just reach the rear of the front A arms and the front of the trailing links where they bolt to the bottom of the floor pan.

So glad for this topic. I’ve been thinking about buying a lift also, and was wondering about the access points. 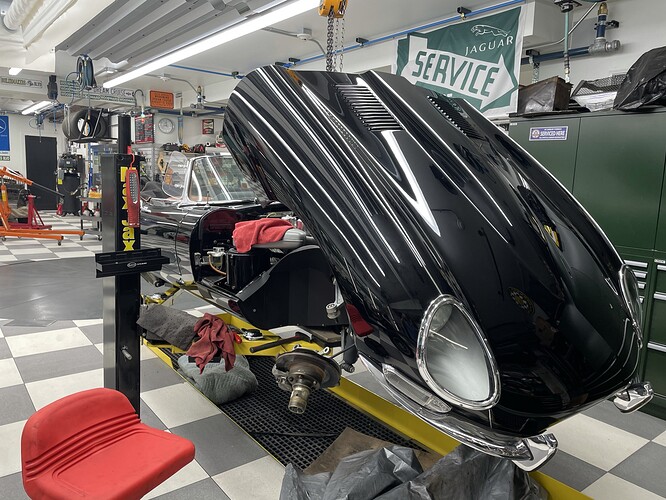 image2048×1536 891 KB
I use a MaxJax side post lift. You install anchor nuts in the floor, I have narrow and wide setups, most of my cars use the narrow but I do have a Gwagon that I change to snow tires/wheels in the Michigan winter and it needs the wide setting.
1 Like
ForzaMinardi (Aaron Meisner) May 26, 2021, 9:49pm #5

I have a mid-rise and I have the same issue with getting to the best jacking points. I have been thinking about creating some sort of custom arms to resolve this, but I haven’t really had a chance to engineer anything so far.

I did cut out a tray in my garage floor so that the lift can store under a sheet of plywood. Works great, though. Wish I had done this years ago…

Dave,
I read about some real horror stories with the Max Jax lifts not rising/lowering at the same rate on both sides.
Have you had good luck with them?
Dave

I’ve been using my MaxJax for about 10 years now with no issues. If it starts lifting unevenly I just go through the bleeding process. It’s always lowered properly. Without it I would not consider doing many of the jobs I take on.

I also have the MaxJax lift. Had it and used it for about 6 years now. Ever had a lifting issue that wasn’t resolved by bleeding.

It’s an outstanding lift IMO and now they have a “new and improved version” makes it an even better and essential tool.

Agree with all you say on the subject Jack, pun not intended.

Fwiw, I use the SS jacking points on my 2+2 when using the lift, not had a problem in the many years I’ve used the lift.

Thanks for the positive notes about the MaxJax. I’ll have to take some measurements this weekend. The garage is a small two car but there’s only one garage door. I’m planning to use four wheel trolleys to slide the car over after I pull it in. Then I can wheel the second MaxJax in place and lift the car.

I use the SS jacking points on my 2+2

I wouldn’t argue that you could use the jacking points, especially on a 2+2 where there are two of them on each side, as long as the associated structure is in good condition. It appeared to me in the link from the OP that there were no arms whatsoever, which I think could be a problem for some cars. Also, I know my 63 FHC only has one jacking point per side.

Dave, be aware that my mid-rise Bendpak is “portable” only in a general sense. It is one heavy sonofagun. But technically you can move it around. I wind up keeping it centered on my shop door and I have built wooden ramps/platforms to get me enough clearance. Your challenge with a single door might mandate your approach using the wheel rollers. Careful planning will be required. Also, get good ones. I have some cheap ones and the wheels just barely articulate. And you have to jack the car onto the rollers. The better ones have a self jacking feature.

Good points, thanks Harvey. I have used a friends set of self jacking trolleys in the past. They were great.

The Quickjack has an optional cross arm to help get to inboard jack points.
Dave

Dave, for the scenario you describe, I think I might stick with some tall jack stands and a floor jack. I have both the Bendpak mid-rise lift in one bay and a single post lift in another bay. (I hate to rub it in but I have 6 bays) They pretty much dominate any area where they reside. They are great when you need them but you really need a dedicated bay to put them in. Even the ones I see in the magazines that supposedly fold up and store against the garage wall give me a chuckle. Like I’ve got spare garage wall space to dedicate to such storage!

Not to get too far into fantasy but there was a wonderful feature on Petrolicious I think of a guy with a Porsche 911 and a tight garage. His lift was installed in a shallow pit such that the top of the lift was at floor level. A lot of his shop equipment was on rollers. It was pretty sweet. But a lot of time and money went into that configuration.

Regarding cross bars, remember the exhuast system is going to be the lowest point on the car.

Good luck with your quest!!!

I think I know who you’re talking about with the 911. I used to just park my 911 over my platform lift so it was never in the way. I kept that lift and the 911 in an airplane hangar. When I switched airports, I left the lift and kept the car. It was just too much trouble to move and only practical for a 911 or old VW with virtually nothing in the middle of the car to work on.

You may be right about just working with jack stands.
Dave

Like I’ve got spare garage wall space to dedicate to such storage!

No…that “problem” only belongs to @Craig_Balzer…

I have the Bendpak mid rise and it works well. When I had my track car it was too low to fit over the lift so I made some wooden ramps and platforms on the side of the lift. I have the XKE on it which is a tight fit due to the narrowness of the car compared to most cars. I could remove the platform as it’s not needed but by having the car up 4" I can open the bonnet further without hitting the floor.

I just bought a MaxJax last month. It’s the ‘rev2.0’ version. It has nice features that my friends older MaxJax does not. I haven’t had the E on it but have had others on with no issues. No drawbacks that I can see. It really is ‘portable’, if you need your shop space back.

Actually got it on sale, through Home Depot!

@tbob, do you have a model number to reference? 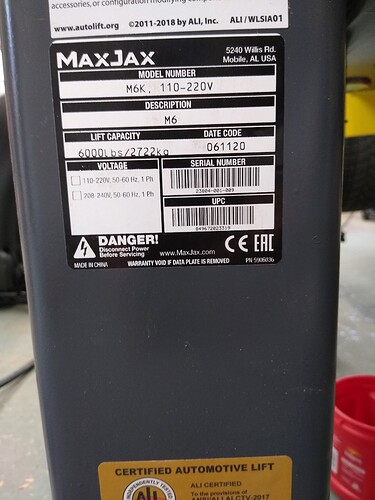 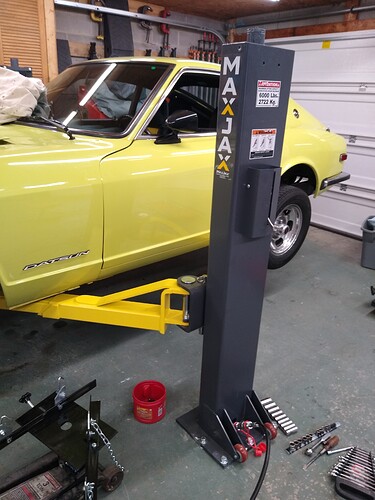 The original company and patent were recently bought out. The new company produced the improved model. So different manufacturer all together. Lots on the internet.