I’m rather pleased that I’ve just acquired one of these via Ebay for an extremely good price. It was described as used, but it looked so good to me that I couldn’t resist it. Having now received and closely examined it, I’m positive it is NOS. The screws securing the lid to the base look unmarked, the plastic windows are clear with absolutely no shrinkage and the cork gaskets look as new. There is no evidence of bulbs having marked the sprung copper contacts, nor do the three bullet wire terminals look as they’ve ever seen action. Unfortunately, the main base casting is not chromed, but is silver painted, and the part number is 53097, which I know from reading old postings on this forum is not strictly correct for an XK120, although Urs Schmid shows this part number in his picture of the rear of the light. Interestingly (or not!) his picture shows the hole for the wiring leads below the part number, whereas mine comes through a rubber grommet on the flat base adjacent to the Lucas 469 on the lid.
I had thought of chroming the base, but to get the bulb holder casting off without damage looks problematic to me, so I think I will simply clean the base up, prime it, and spray with Eastwood’s chrome effect paint, which should get pretty close to the original appearance.
So, I will be able to replace the modern repro part with its chromed pressed steel base (a very passable copy, and plenty good enough for most) with a genuine Lucas item. Happy days!!

My original, from a December 1953 build, was painted silver. I’m having it chromed but it would otherwise be correct repainted, fwiw.

I took mine apart, bought the correct rivets and assembled it back.

If you need the rivets, PM me.

Mark V also used those 469 lights, a slightly different version, smaller windows. Mine have the base painted black, and the wiring comes through a rubber grommet on the base between the studs. 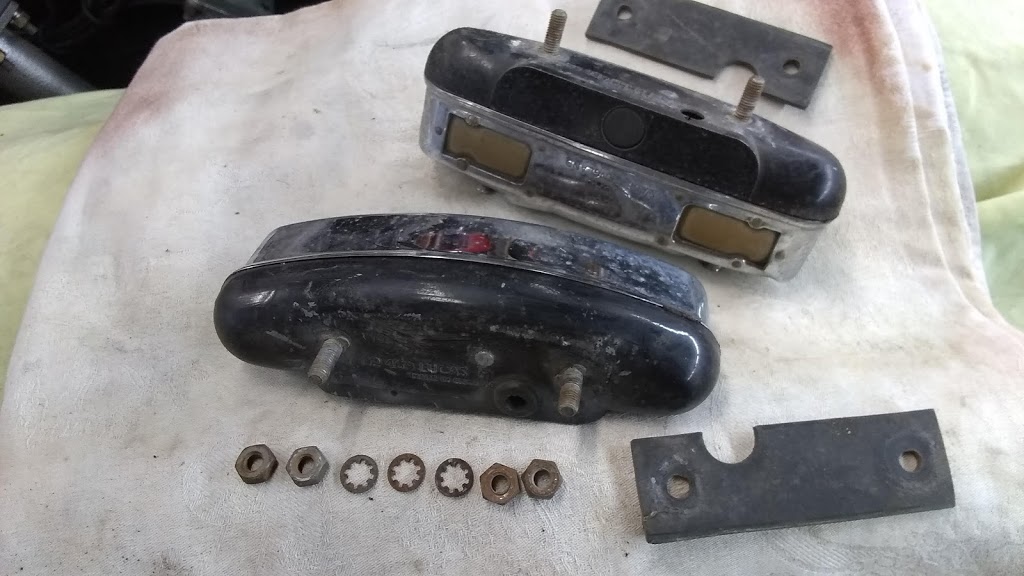 Intriguing how many variations there are on the 469 light unit. Chromed, silver, and black painted base, mounting studs on rear and bottom of base, large/small windows, leads out the back or bottom of base. I’ve even seen an all black version without the reversing light glass at all.

Thanks, Tadek. I think I won’t try and take it apart. It’s NOS, so the chromed cover and windows are perfect. I wouldn’t like to try and take out the bulb holder unit, as it appears that it mounts not with rivets, but with cylindrical extensions of the casting itself (which may be slightly peened over on the back). Pressing them out without breaking the casting might be tricky. There’s only one rivet on the back which holds a fibre insulating plate to the body. Cheers, Chris

then there is the wording on the reverse light glass! I have one that says Wolseley in red letters
the fibre pad shown as black between light and mount bracket I have seen in red as well

This is the typical way LUCAS arranged everything.
469 is their TOP level Model part number, and is really just the main heading.
Underneath the model part number, you can have one or more or many more detailed variants, each of which has an individual part number.

For an XK120, the NUMBER PLATE ILLUMINATION AND REVERSE LAMP is allocated Jaguar Part Number C.2838.
In Lucas terms it is a MODEL 469, but in detailed part number terms it is a Lucas 53159/A.

If you really want to know all the exact detail of what exactly a 53159/A is, then you can refer to the relevant age LUCAS MASTER CATALOGUES which are incredibly detailed, and indeed make the Jaguar SPC look like the weekly shopping list. The Lucas MASTER CATALOGUES are published approximately every five yeras, and with intermediate updates, starting with the Catalogue No.400 published in Sept 1935 which covered LUCAS components made for the 1926 to 1935 period, superseded by the 400A, then 400B, then 400C (see later), then 400D then 400E - the 400E published in 1960 (covering 1945 to 1960 parts albeit coverage is prioritised for current parts 1960, with earlier parts dropping off as demand diminishes thus inclusion in catalog)

So if you get into the 713, the 400C Supplements and the 400D apart from fully describing a 53159/A Lamp, it will also fully describe all the other variants in detail of the MODEL 469 NUMBER PLATE AND REVERSE LAMP

Thanks, Roger - this is very interesting info! Investigation suggests these are available on CD Rom. I might look one out. Somewhere I do Have the Lucas Jaguar catalogue which is relevant to XKs, but it obviously doesn’t go into the detail that the Master Catalogues do.

I was aware that the 1960 Lucas 400E had been copied/electronically published, and indeed I do have an electronic copy on a searchable .pdf format.

I fortunately obtained all of these Master Catalogues in good original hard copy many years ago, when I was eventually able to locate them even then after a lot of effort, but have only copied the occasional page when researching a particular subject………

I searched but did not find 400C.
I ordered 400B 1939, Equipment & Spare Parts 1951, Lamp Spares 1939-50, and Lucas/CAV 1946-60 on CDs from an ebay seller in Surrey calling himself classic-car-manuals with nearly all positive feedback, so when they come I’ll let you know if there is anything about that light in them.

The 400B is best Master Catalogue relevant to your 1938 SS Jaguar, albeit there are two versions.
The original 1939 published issue, shows just 1939 on the front cover and comprises 184p+ - this is very accurate and the most comprehensive.
The later reissue of 400B is dated 11/58 and looks the same, but now shows 1930 - 1939 on the front cover, comprises a reduced 152p+ but is also most useful as it provides some additional information, deletes obsolete information, and shows superseded part numbers etc.

Its hard to say exactly what your other three CDs are based on just your headings…
The Lucas/CAV 1946-60 is most probably the 762p+ 400E, published in 1960 so excellent regarding information from about the 1955 to 1959/60 period, but somewhat abbreviated for the 1946-54 period that it claims to cover. There is also 16 page 400E Supplement that gives more detail of components in the Sundry Parts Kits, so useful to have, and hopefully included within the CD.

Roger/Rob, I bought a CD Rom from the same guy you did, Rob. It is titled Lucas & CAV Master Catalogue, Equipment & Spare Parts 1945-60. It will be interesting to see exactly what it is.
Chris

It is the 400E that you have - actually the last of the really comprehensive Master Catalogues, later ones are limited coverage text only or text and line illustrations, but the 400E covers up to 1960, so pretty well everything XK150 and XK140 but drops off much older model superseded parts detail.
The earlier 400D is I think, a much better Master Catalogue, but being published in early 1955 doesn’t cover XK150, and not all XK140, but is of course the best coverage of all XK120 1949-54.

Good to know, Roger. I’ve already used it today when ordering parts from The Distributor Doctor - I felt like a real expert quoting numbers for advance springs, condenser, points, etc!
Would you happen to know what the ignition curve 440 looks like compared to 362? I’m actually rebuilding a 1956 Mk VII distributor 40372A to be the same as a 40199E XK120 one,. As far as I can tell, it only really involves different springs, and vacuum advance canister. Weights and toggles are the same, as are condenser and points. I’m also getting a new wick set.

Chris -
When I was looking at getting my XK140 Distributor rebuilt, as I do, I asked around people I know capable of giving sound/competent advice on where to go - and indeed was referred to a Melbourne Company that restores as required, or develops new to suit modified/race cars that have no ‘standard’ specification for Distributor - so Jaguar Distributors, and certainly XK distributors are not their commonly seen jobs. So I dropped in unannounced, and put my Distributor on bench, and said I wanted it rebuilt…
He asked me what it was from? I said I am told you are an expert, you tell me what it is…
He picked it up, had a good look and said it looks like its off an XK150 Jaguar.
I said close enough - I will proceed.

I started off saying I wanted it 100% rebuilt back to exact correct/original spec, including the damaged vacuum advance. No worries he said, but advised me against that, saying they prefer to ‘adjust’ the advance map, to better suit current/modern fuels that have different burn characteristics than 1950s fuels - and not just octane ratings. Makes a lot of sense I thought, so I said go for it. Distributor now fully rebuilt/renewed as necessary, including rebuilt vacuum advance - don’t know exactly what they have done re springs (new), weights (new/adjusted?) nor vacuum advance (?), but is written down on their invoice. Havnt tried it yet, so don’t know if it works or works better, but as above I did have a lot of confidence that I was dealing with genuine experts, who knew their product specialty.

I guess what I am suggesting - see what Distributor Doctor say (don’t know of them, thus whether any good or not), but modifying original to suit current fuels makes a lot of sense to me.

Roger,
I’m impressed with The Distributor Doctor. Martin knew every part I needed, mostly from memory! I asked for advance springs by part number, but he said he worked by distributor number for those. He could even supply me a new metal strap connecting the condenser to the main terminal - they make their own, and although it looked quite thick metal, it was really easy to bend to the perfect shape. I did notice that their points set had a noticeably stronger spring than my Lucas original, probably no bad thing in eliminating points bounce, though I’m not so sure that the fibre heel might not wear more quickly…
He did say that any distributor they rebuild normally has to be tweaked slightly to get the advance curve exact, and can be custom tailored for modern fuels, but they will be very minor adjustments. Apparently they all differed slightly even when new. I haven’t decided whether to go the whole hog with this or not, yet.