One of my SS front shocks had only about 3 ounces of oil in it and it leaks around the shaft. I’ve disassembled it this far. 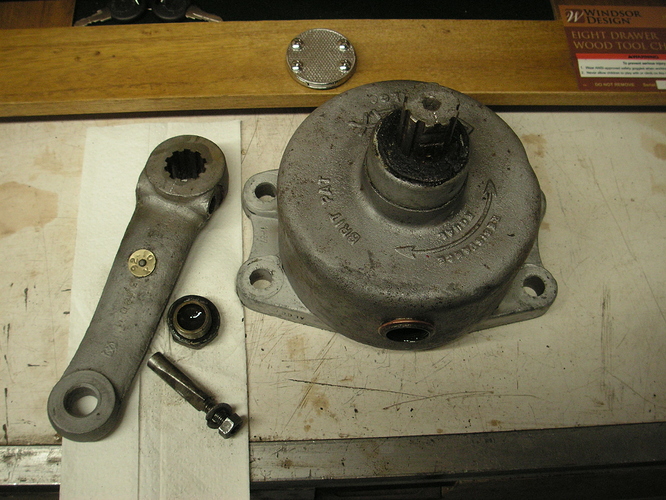 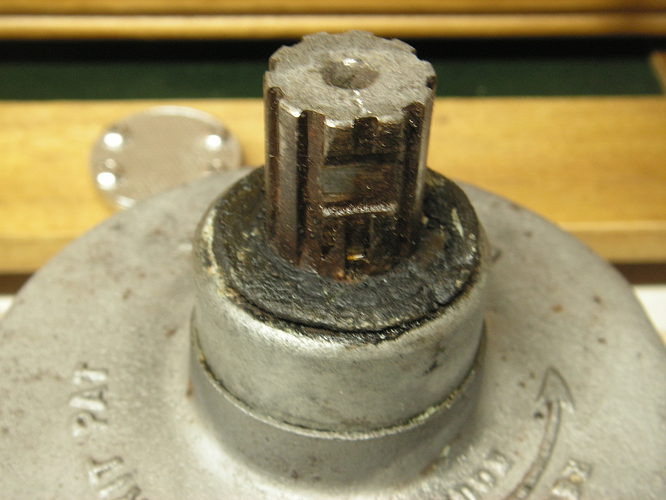 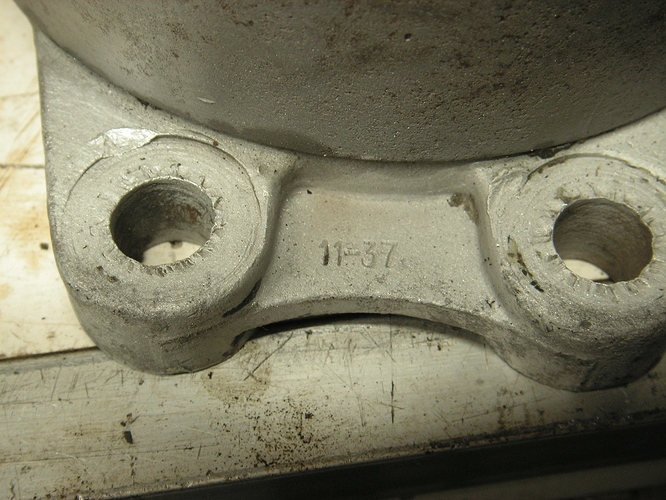 It’s 25 years since I had my Luvax shocks reconditioned. I did try to pull the lever arm off the spindle but found that impossible without the correct puller so I never ventured inside and left them to a specialist so I can’t offer any advice on seals etc.

I don’t know if you have this document or not but it may help you.

Excellent!!
Thanks Peter and Peter. I did not guess that the back unscrews and has a rubber gasket, should be easy enough to make. I can make those tools. The rubber gland on the shaft is what I need, looks easy enough to make as well.
My next question was going to be what oil to use, so I will read this carefully and see what I can find to match.
Proceeding!

I had some CMPC shocks reconditioned by Stevson Motors in Birmingham UK & they recommend STP oil treatment for petrol engines as the oil. They sent me a couple of 300 ml bottles made in the UK. Another pair of CMPC shocks I bought from Graham Brown, Vintage & Classic Shock Absorbers near London UK & they recommend Mobil Glygoyle 460 Semi Synthetic which may be also sold as Esso Glycolube 460.

With CMPC shocks the pressed steel cover is a press fit & is a cow to take off & a cow to fit so it doesn’t leak.

I am instructed that…
Removing the rear alloy plate is correct. One would need to make a tool a squarish section to fit in the recess and a long bar welded to that to get leverage. It is in witha fine thread [ probably a Brass thread. And wil be tight to undo. Might be worth soaking in penetrine first There is a gasket/ seal in there which one needs to be careful that when doing back up doesn’t twist and tear. Doug says he used sealant on the threads
The front seal on the shaft…
is a moulded rubber,VSA in UK have them but may not sell separately if they aren’t reconditioning the shocks. The shaft may also be pitted
On the ones Doug did, he machined the housing out to fit a wave seal and had the pitted shaft hard chromed and ground. In hindsight, he said, It’s probably just as cheap to send them to Graham Brown at Vintage Shock Absorbers in Croydon UK and have them do them.in pairs and tell them you want the valving set for bump and rebound respectively. They are geared up specificaly for this task

Well, that was easy; it came out with a screwdriver. 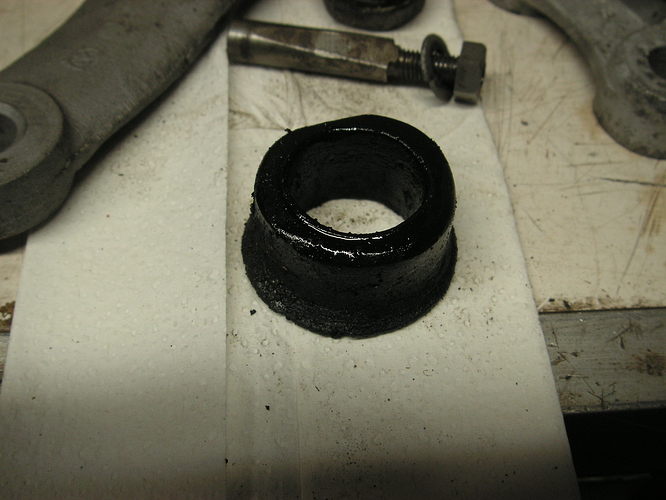 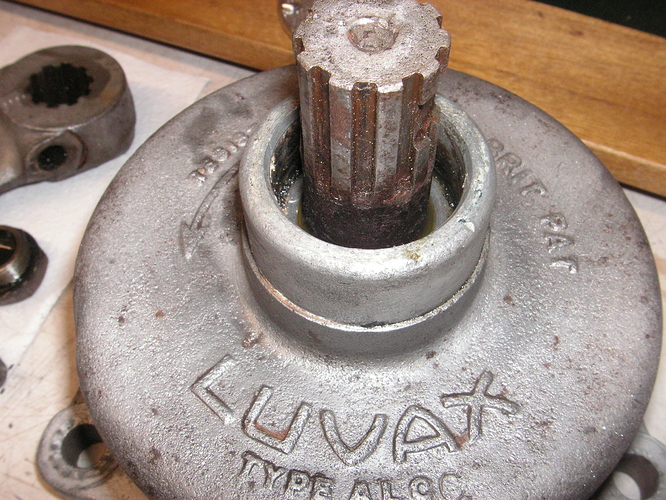 I see the steel cover is pressed on over the aluminum casting. I don’t think I’ll try anything with it, as it doesn’t leak.

I’ve been involved with British cars since before I had a driver’s license, my dad and uncle born in Glasgow, aunt born in London, so I thought I spoke British English pretty well, but “cow” is a new one for me. In context I understand it to mean difficult, as we would say a “bear” to remove. Also “rhone” meaning a gutter downspout is new to me, I thought it was a river in France and an airplane engine. Love this global village.

I’ve not been to Beaulieu Autojumble for a couple of years now but Graham Brown always had stand there.

I think this address is correct:

Your vcsa link opens for me.

As to guttering, I was aware of two spellings but prefered the old references:

Scots Language Centre - Email - RONE n a gutter at the eaves of a roof.

Scots Language Centre - Email - RONE n a gutter at the eaves of a roof. 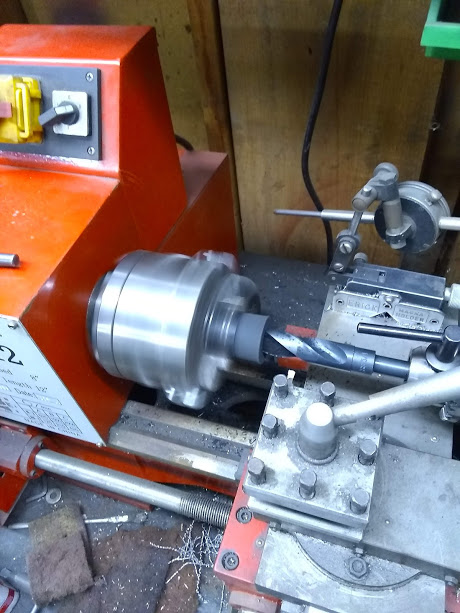 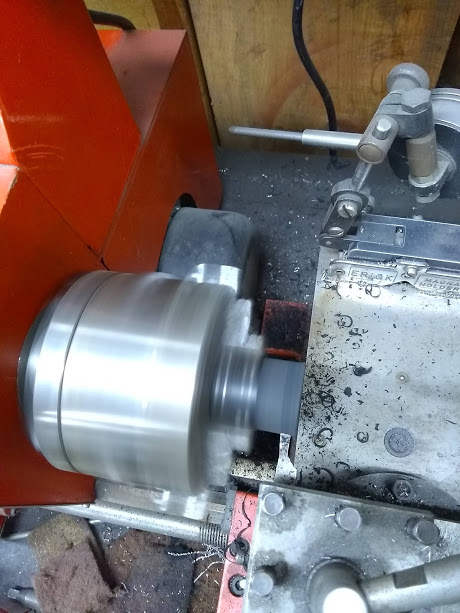 Smeared with liquid soap, pressed in with a socket

For future records:
This shock has various markings:
ALCC14 which means for Light Commercial and High Powered Pleasure Cars
18
11
8
A
and on the brass disc 92-10 X

The one from the other side appears to be identical but newer, less rusty anyway, possibly a replacement from 6 or 7 decades ago, and has these markings:
ALCR5
14
1
4
T
1
and on the brass disc 92-10 Y

There is cast in number Y9014/8A on the back, a logo SDF and a patent no. 360168, which turns out to be for the rubber shaft seal and the rubber in the links.
https://screenshots.firefox.com/TaK0gWdUHY2Wq8GP/worldwide.espacenet.com

The rubber seal looks good Rob. Are the bearings free from slack?

Yes, I did not feel anything wrong when turning it with no shaft seal at all, and now with the new seal it takes a bit of force to turn it, so I think it will seal well, not leak. I’ll put shock oil in it tomorrow and see.