Manual Bellhousing 4.2 vs. others

Sorry for the cross-post but you E-Type guys probably have the answer to this question.

I’m in the middle of an automatic to compact-overdrive manual trans conversion on a Series 1, 4.2 XJ6. Just about to put the drivetrain into the car, installing the starter and I find that the bellhousing is not drilled for the starter’s spigot plate dowels. This bellhousing has the correct size opening for a 4 synchro box so I figured it was good to go. Apparently though, 2.8’s (same exact gearbox) use inertia-type starters that aren’t mounted with a spigot plate/dowel and of course don’t interchange because the pinion gear has fewer teeth.

My question: are there any 4.2 bellhousings that aren’t drilled for the spigot plate dowels? I’m thinking I was sold a 2.8 bellhousing… and of course, I went over the whole thing with a magnifying glass and no part number.

Hi Mike…what flywheel are you useing…one from a 4.2 with 133 teeth or one with 104 teeth…one option you can look at is the smaller high torque aftermarket starter motor…you can get various options and should be able to find one that fits your bellhousing and a pinion to match the number of teeth on your flywheel… just to add i think all 4.2 bells had the drilling for the spigot plate…there are also other bells than the 2.8 that had the larger bearing recess for the 4 syncro gearbox i think some of the 3.8 S types used them…Steve

I have a full syncro S Type bell housing on the shelf if you want me to take any measurements or photos.

Hi Steve - It’s definitely a 4.2 Flywheel. Right number of teeth and I even checked the part number.
Sounds like I got a non-4.2 bell

I found a starter from Brise in the UK that is supposed to be able to be used with for a “3.8 with 4.2 Flywheel” but its $650 plus shipping which is way too rich form my blood. Do you know of another place that would have something like that for alot less $$? I’ve already spent sooo much on this conversion.

Thanks for the info.
~Mike

Hi Wardell - I’d sure like to see it. Maybe then I could tell what mine actually is… Maybe the flywheel side and the gearbox side? I supposed if it is usable for a 3.8 S I may be able to sell it and recoup whatever fixing this issue is gonna cost me.

Hi Mike…this is the type of starter… SNG Battetts also sell them…but you need to be sure it fits the non 4.2 bell and a 133tooth flywheel http://www.fossewayperformance.co.uk/high-torque-starter-motors/

Thanks Steve - will take a look.
~Mike

There’s a couple on ebay in UK at the moment at about £350, they have been on a while and not sold at that price. Mine is off a 1966 S Type which had the inertia starter, and full syncro overdrive gearbox, but used the old style, multi spring clutch, not the diapragm type.

I’ll send you some pictures soon, probably tomorrow or Friday.

Here are the bellhousing photographs. I have marked the starter front face location in green. Must say I never noticed this before. 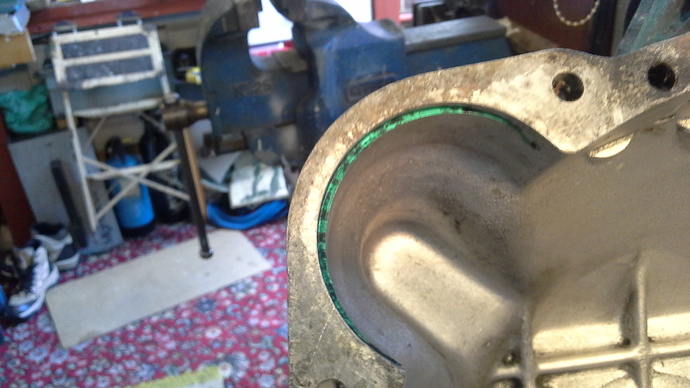 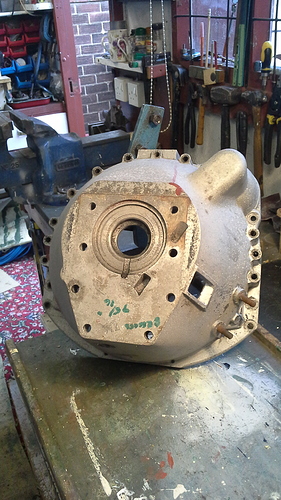 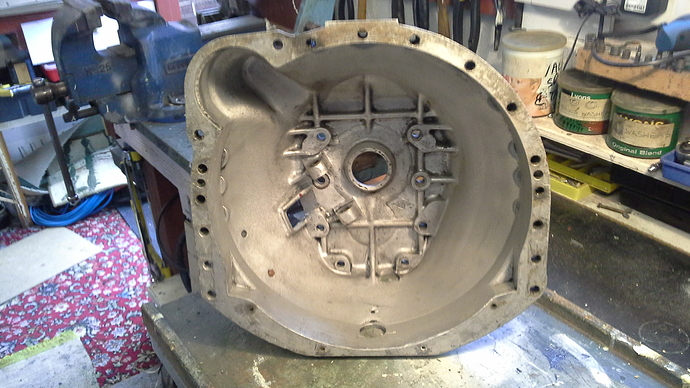 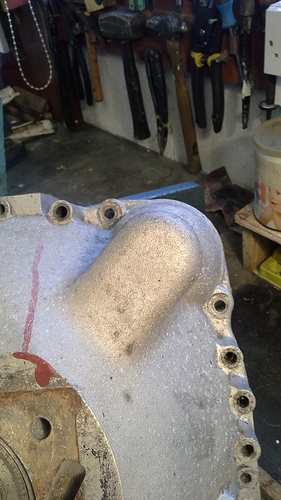 As using the wrong one the clutch will not release…ask me how I know?? there are 4 types

ps. Mike this conversion DID cost me a LOT of money…LOTS…

Thanks so much for the pics! That looks like the same bellhousing I have. Same cutout area that you marked in green… Same Dialoy diamond-shaped casting mark inside.

I never thought about the starter thing at all honestly until it became a problem. I got this conversion from someone who is an undisputed expert in the old Jag field - If I mentioned his name you would instantly know who I was talking about so I kinda didn’t really question whether or not it was the right bellhousing for a 4.2. I’m sure it was an honest mistake but now I gotta find the right one.

Hi Mitch - I’m not gonna try to use the bellhousing I have… gonna get a 4.2 version so I don’t have to mess with any of the compatibility issues. It was my understanding that all 4.2’s used the diaphragm pressure plate… Is that not the case? I have the correct full-synchro box, correct flywheel, correct throw-out bearing etc… only thing that is wrong for a 4.2 is the bellhousing.

Mitch - That’s a disturbing turn of events… hope I don’t encounter any of that. This has been enough trouble already.

In the XJ6 parts manual, there is no listing for a spring-type clutch but a '69 is truly one of the first cars so who knows…

I have a regular old flywheel and NOS 9.5" Borg & Beck pressure plate. My throw-out is a New Old Stock part - I forget what company but I can see no difference between it and the one I got with the gearbox.

Well at the very least, when I get this thing sorted I’m gonna make damn sure the clutch releases before I finish putting the drivetrain in the car!

will let you know what I figure out

Thanks,
~Mike
will let you know what I figure out

I have a friction plate and release bearing ( not diaphragm type), on the shelf if you want to compare dimensions.
There is an excellent picture somewhere in the archives showing the 2 different bearings.