Both my V12 XJ-Ss are Lucas which pleases me. I find nothing basically wrong with the Lucas dizzy, it just requires a minimum of regular checking and maintenance.
The Marelli dizzy does seem to have more problems although with modifications and regular checking it can go the distance.

The 1988 convertible has Lucas of course, and so does the 1979 HE engined car but with a difference. The OEM Lucas amplifier in the 79 died not long after I bought the car in 1984. It was replaced with a Crane Cams V12 setup which had a much better amplifier and part of the kit was a 12 slot disc for the dizzy.
Now and again somebody on the forum raises the question of how to toss out the Marelli and change over to a Lucas dizzy. So how do you do it ?

I have a spare 12 slot Crane Cams disc and I will use that in the V12 HE engine I am almost finished rebuidling. The slotted disc is used in conjunction with a LED type pickup to provide ignition pulses. The standard Delco type CEI module can be used to drive any low impedance coil.
There should be a fair number of scrapped V12s which will yield a decent Lucas dizzy, that is the starting point.
I have a small business making electronic test gear and the LED pickup parts are all in stock. A suitable PCB to fit the dizzy is already designed since I have to make one anyway.

I have made a CAD file of the slotted disc copied from the Crane Cams one. Next time we order metalwork for production I can add one or as many as I like. Way back the kind of metalwok we use would be punched on a CNC turret press, like the U.S. made Strippit press. Trouble is for something like that slotted disc you would have to make a form tool to press it in one hit rather than the usual nibbling. Not a cheap deal.

How technology marches on. Up to a few years ago you could not laser cut aluminium which is what we use. Now there are CNC laser cutting machines can cut just about anything. So all our metalwork is simply cut with lasers from a CAD file, no tooling and very little prgramming needed. It is also precise, we have 3mm holes cut for Pem studs which have to be within 5 thou.

So if anybody is interested let me know and I will add discs. The plastic collar i could get made here too, although minimum sensible quantity would be 10 due to set up cost. I have a lathe so can make my own collar but not practical to make more.

Here is the Lucas dizzy I fitted with a slotted disc back in the 80s.
If you get one from a scrapped car you mifght want to strip it down for checking.
You can grind the peened over pin holding the gear, then punch it out. Refit with a piece of brass bar for the pin, there is very little torque transmitted.
The bearing is a standard size easily found. The oil seal in the dizzy body could well be rock hard. I could not find an exact replacement at the time. The trouble is the OD is not a standard size or profile. I did find one with a suitable ID and set it in place with silastic.
I still have a few Lucas dizzies in various stages of undress which are kept for spares. 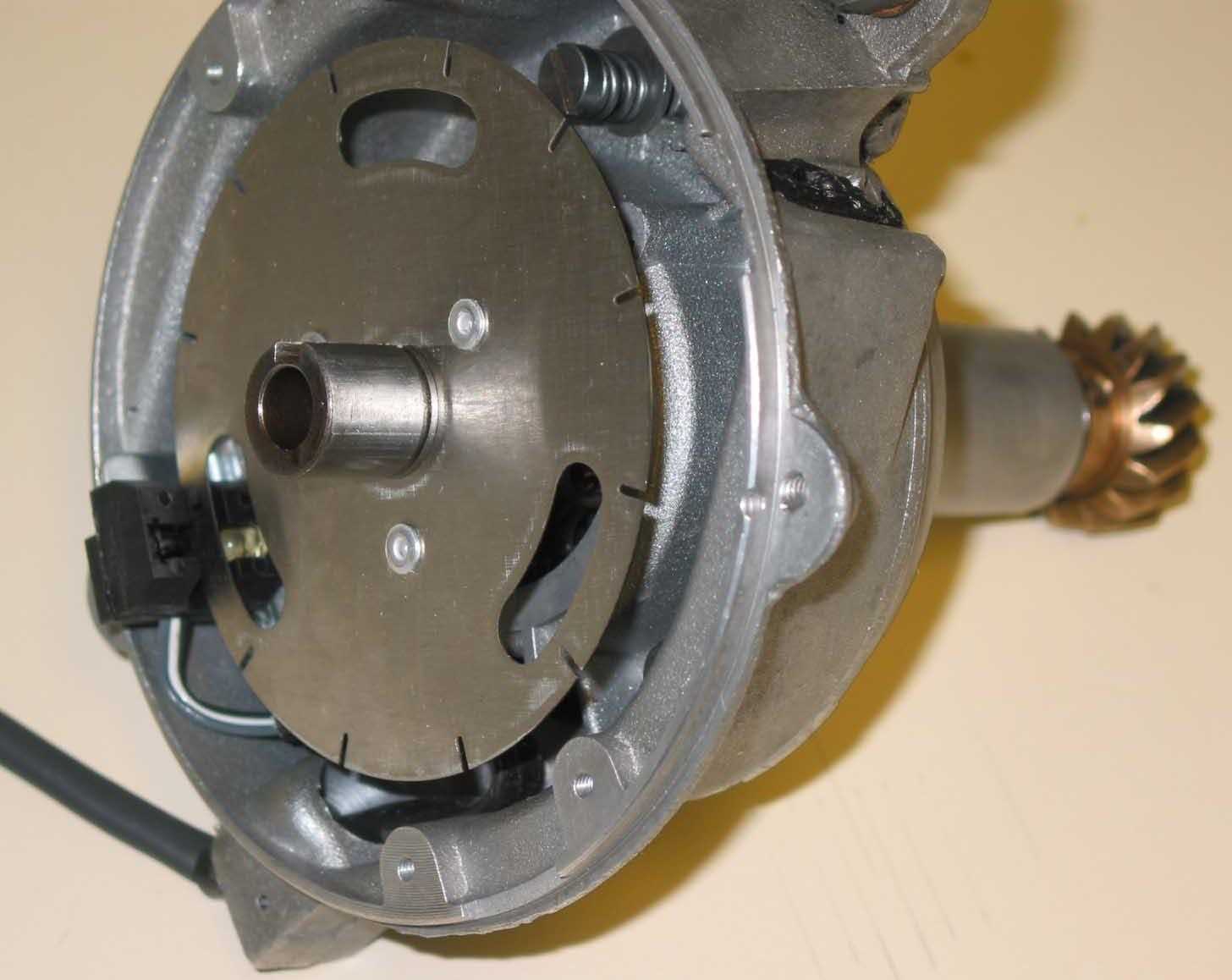 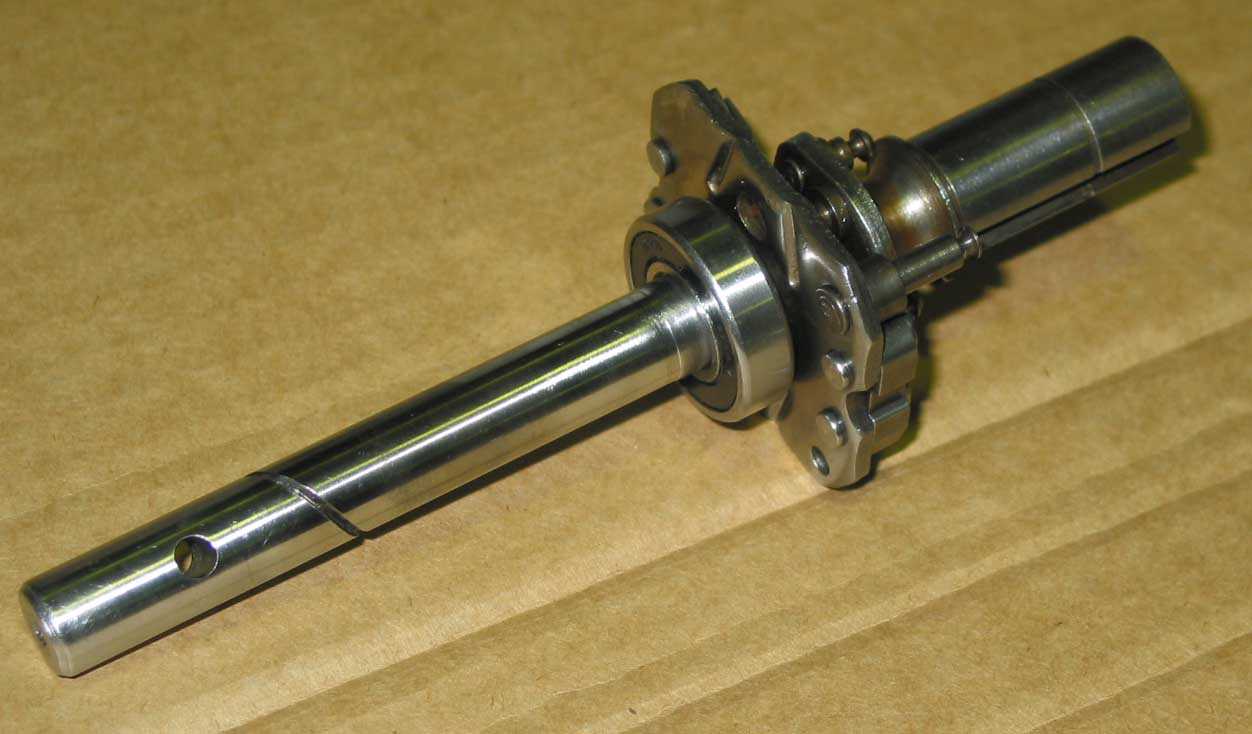 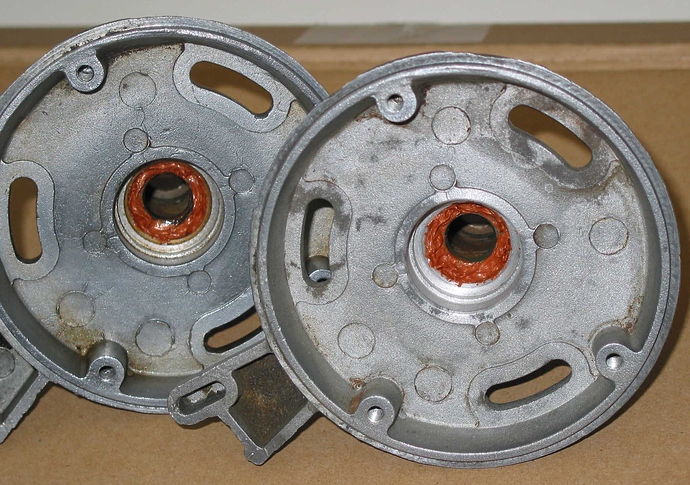 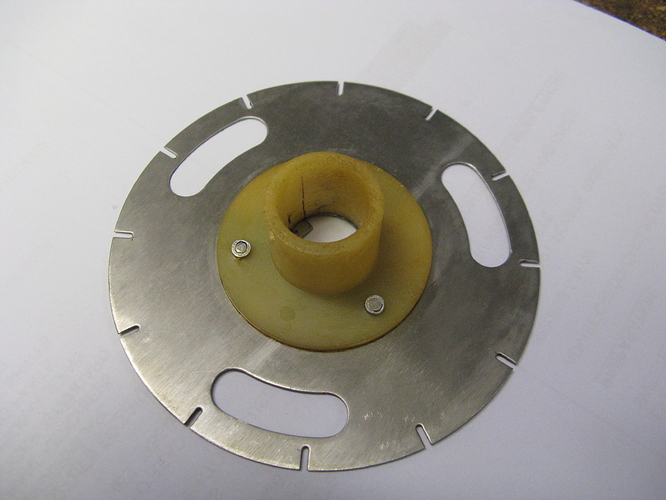 Now and again somebody on the forum raises the question of how to toss out the Marelli and change over to a Lucas dizzy. So how do you do it ?

Are you suggesting that Marelli owners might consider swapping over to a Lucas dizzy with a Crane Cams (F.A.S.T.) ignition system rather than the Lucas CEI? Or are you saying the slotted disc and LED pickup can be used to drive the Lucas CEI in place of the star wheel and magnetic pickup?

Both, with some reservations.
The obvious use of the slotted disc is in pre HE engines where the OEM Lucas amplifier was prone to failure. That was Crane Cams rationale to spend money on a slotted disc tool, they must have sold many, many hundreds of those kits.

The star wheel design works well in the HE engine, no great urge to change it.

The Marelli dizzy failing is a fairly regular issue, although your book does have suggestions to get around the weakness in the design. An option is to change to a Lucas dizzy. I do not have a Marelli car to work with, but I guess there are ways to bypass the Marelli ignition module using the advance and vacuum control of the Lucas dizzy.
Does the ECU in a Marelli car rely on any signal from the Marelli ignition module that could not be provided by other means ?
The idea is just food for thought, not an imperative.

Does the ECU in a Marelli car rely on any signal from the Marelli ignition module that could not be provided by other means ?

That’s been discussed before. It is contended that the EFI in the Lucas cars needs 6 pulses per crank rotation while the EFI in the Marelli cars needs only 3 because it’s getting a pulse signal from only one 6-cyl ignition amp. For this reason, it is common to replace the EFI ECU with the earlier version while retrofitting a Lucas ignition system to a Marelli car. There are others, though, who claimed to have replaced the Marelli ignition with the Lucas dizzy and simply connected it up to the existing EFI and it worked fine.

It is quite easy to divide the 6 pulses by 2 and give the Marelli version ECU what it wants to see.
Then surely you do not need any of the Marelli ignition system. You use the Lucas dizzy, the standard Delco or GM CEI amp, and a low impedance coil. Anything I have overlooked ?

It is quite easy to divide the 6 pulses by 2 and give the Marelli version ECU what it wants to see.

Please elaborate. And by elaborate, I mean post a schematic that anyone can follow to construct their own. Thanks!

Gotta do the tach too, unless you wanna swap out the tach for the earlier model. Can you do both with one circuit, or do you need two separate circuits?

Do know what the pulse input to the tacho is ?

I’m confused by the question. On the Lucas CEI, the signal to both the EFI and the tach is essentially a connection to the - post on the ignition coil. It’s just routed through the ign amp where both signals pass through a resistor to limit current in the event of a short somewhere. Since the coil in the CEI fires all 12 cylinders, that means it gets 6 pulses per crank rotation.

The Marelli ignition system is essentially two 6-cylinder systems, so the - terminal on each coil only sees 3 pulses per crank rotation. As I understand it, one such signal goes to the tach, and hence a 6-cylinder tach is used in Marelli cars. But the signal to the EFI I believe comes from the Marelli ECU itself, not from a - terminal on a coil. Supposedly it’s a very clean square wave which allowed the ECU to do away with some signal filtering at the input. Is it 3 or 6 pulses per crank rotation? I dunno. That lack of signal filtering is another reason that some claim you have to retrofit the earlier ECU when retrofitting the Lucas CEI to a Marelli car, but again others claim to have changed just the ignition system and the car ran fine.

Supposedly it’s a very clean square wave which allowed the ECU to do away with some signal filtering at the input. Is it 3 or 6 pulses per crank rotation? I dunno.

Supposedly? Your answer to this Kirby might be again “I wasn’t paying attention” :-)))

The Marelli signals were discussed here at least a dozen times in the last year or so. Here is one example: 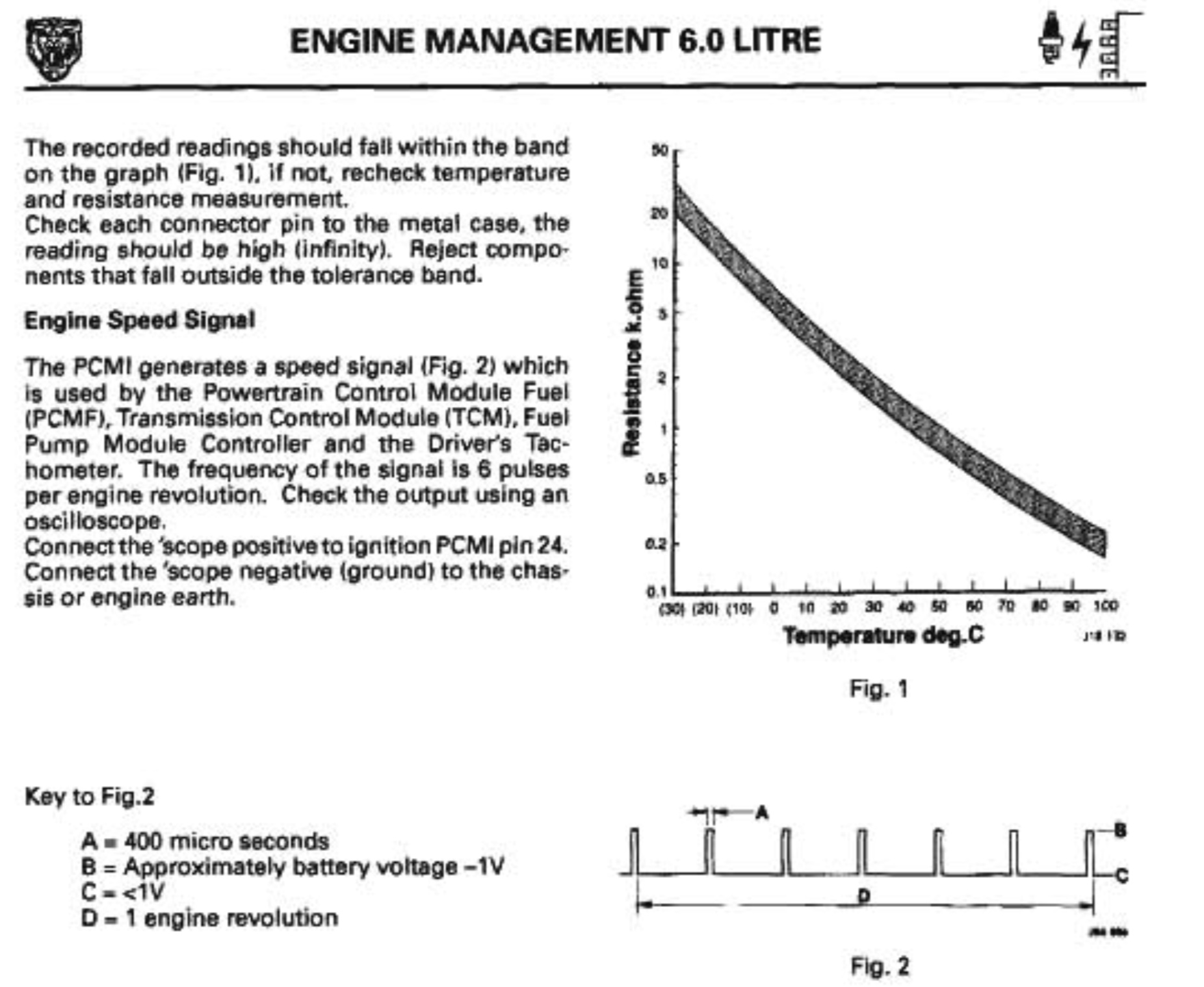 No, the screenshots I provide earlier are specifically for a 5.3L V12 with Marelli. Below are the screenshots from the 6.0L manual and the forms are the same. [21%20PM] and [05%20PM] The square-wave is the the signal which the Marelli ignition ECU generates. Here: [44%20PM] This time, this is from the page specifically describing the 6.0L, but I saw similar figure earlier in the manual with regard to the 5.3L.

So it is 6 per crank revolution. So presumably you could replace the Marelli with a Lucas CEI and just plug it into the wire to the ECU and it’d work fine. And this says it drives the tach, too! This looks simpler and simpler. Why have so many replaced the EFI ECU when doing such retrofits?

It does look like one thing needs fiddling, and that is that a similar signal from the Lucas CEI must be fed to the PCMF, TCM, and FPMC - none of which existed on the Lucas cars, unless the FPMC is that circuit within the EFI ECU. Just split off from the line to the tach? Or install more resistors? Could just connect to the - terminal on the coil, I guess, ideally using some inline resistors.

I looked at the topic:

where you were puzzled by what the signal to the tacho really is in a Marelli system - 3 or 6 pulses per engine rev.
In answer to your earlier question about detail on a divide by 2 ciruit, making a Google search will give plenty of hits.
For something to deal with a Marelli to Lucas conversion I can make a small PCB with an input that can be divided by both 2 and 4. That gives an output that suits any ECU and any tacho. No rush, will wait until we send off a list of production PCBs to be made.
Not that my 2 Lucas cars need it