I took the 3 1/2 Litre Mark IV on an 80+ mile drive yesterday through Kennedy Space Center and Cape Canaveral Space Station. The trip was comprised of approximately a 7 mile drive through Cocoa Beach city traffic at about 35 mph, a 20 mile non-stop drive on open highway at approximately 50 mph, multiple stop-and-go legs of 5-10 miles each at about 40-50 mph, and then a 25 mile drive back home. The car ran okay initially, but about halfway through the trip, started acting up as it has done in the past, with rough running, stumbling, hesitation, and backfiring mostly through the exhaust but occasionally through the carbs as well. It would run fine for several miles, run terrible for a while, and then revert to running fine again. As the day wore on, the poor running became more progressive until at one point it completely quit while driving at about 40 mph. I tried restarting it while coasting to a stop but it acted like it had no spark at all. Once stopped, it immediately started up again, but ran poorly for the remainder of the trip. At that point I wasn’t sure it was going to make it home under it’s own power. I had intended to drive another 30-40 miles, but I cut the trip short and headed home with maximum speed of no more than 30 mph. It slowed so much going up over a couple of drawbridge and overpass inclines that I wasn’t sure it was going to make it. Engine would not rev beyond 1500 rpm. I started it this morning cold and it’s running a little rough, but no where near as bad as it was yesterday afternoon. Tapping the throttle several times, the engine quickly accelerated to 2500 rpm. I didn’t let it run long enough to warm up. No backfiring, but it’s only sitting in the driveway and not under load on the highway. Each of the exhaust manifold tubes seemed to be getting hot at about the same rate, indicating all cylinders are firing. It acts like it’s got a bad condenser, but I’ve replaced it twice already within the past month for the same reason. At the same time I replaced the points and plugs. This morning I’m going to do a compression test on all the cylinders.

Is your distributor clamp tight? I had a similar problem years ago and it was fine once the timing had been set properly and the clamp tightened.

Beware of modern after market rotor arms. Especially if they are black. The colouring becomes conductive when hot and shorts out your ignition. There is a company that makes red rotor arms that don’t have the problem. The original old black Lucas rotor arms didn’t have the problem either.
Stalling Sceptre (oldclassiccar.co.uk)

My rotor is tan color. I’ve closely checked it and the cap for carbon lines indicating a short, but they seem to be okay. I have a new rotor (black) which I will try today.

It will be interesting if it changes anything but a new black rotor will be suspect. I don’t think you will see signs of tracking on the rotor arm. The whole body conducts.

The old adage springs to mind. If it’s not spark it’s fuel, and if it’s not fuel it’s spark.
How about the ignition coil? They have been known to cut out when hot.
How about your fuel supply, pump ok, tank filters ok? any filters in the line?

Yes Rob, my thoughts exactly. …either fuel or spark. I was going to try swapping a coil today as well. Twin fuel pumps. Both operating. clear (Fram) filter before pumps and between pumps and carbs. Both show fuel present and flowing.

Watched fuel flowing through filters with car running and revving engine. Looks like its barely flowing. Disconnected fuel line from carbs and with ignition on and car not running, saw fuel slowly trickling from line. Ran it into measured container. Six ounces in one minute. That equates to about 2.8 (US) gallons per hour. At 50 mph I would have to be getting 18 mpg for that flow to be adequate. I think I’m getting closer to 10 mpg. Figuring I get 10-12 miles per gallon and am driving 50 mph, I should use 4-5 gallons per hour. Seems like fuel pump output is too low. Does that seem reasonable? Are they adjustable?

Okay, I answered my own question. They are not adjustable…not that it matters at this point. I did a ‘feel test’ to each pump to verify operation. Each felt like it was running. I disconnected electrical leads to each, and discovered one pump was inop. No only no flow, but the relay wasn’t even vibrating. Still, I think the ‘good’ pump should be putting out more than 2.8 gal p/hr, so no doubt both need replacing.

I believe mine are model AUA 25B…which Burlen lists as out of stock. The ‘B’ designator is for brass. They also list an AUA 25…which is also out of stock. They claim to have AUA 66 in stock (for 50% increase in price). All of them state low pressure with a minimum output of 8 gal p/hr. Looks like the fittings on the AUA 66 are different (slip on versus threaded for AUA 25). Any thoughts of their interchangeability?

Found 2 new AUA 25s in Michigan on eBay for the same price as Burlen, with delivery estimated next Monday. They’re on their way to me. No sense trouble shooting any further until I get this fuel pump issue straightened out…which may solve the entire problem.

Fuel starvation would describe your symptoms.

I have rebuilt about a dozen of those SU pumps. They are really not that difficult. The diaphragms get hard after 30-40 years and don’t flex enough. The points wear out.
Points and diaphragm and clean out the debris is the basic rebuild. Use a fuel proof sealant.

From there you can upgrade/modernize with a transistor circuit that makes the points last forever, which I have done on all of that dozen.

There is also a Hall effect device for them, but I have not seen it. I want to try it on my next one.

There is also a Hall effect device for them, but I have not seen it.

What is the Hall effect, Rob?

“The Hall effect is the production of a voltage difference across an electrical conductor that is transverse to an electric current in the conductor and to an applied magnetic field perpendicular to the current. It was discovered by Edwin Hall in 1879.”

As I vaguely understand it, it is a magnet moving on the diaphragm stem to operate the coil, switching on and off.

Burlens sells this electronic conversion kit. They don’t use the phrase Hall effect, but I think that is what it is. 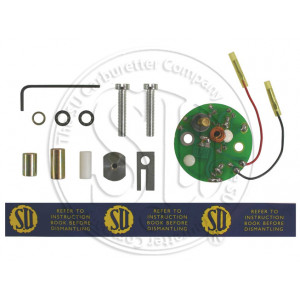 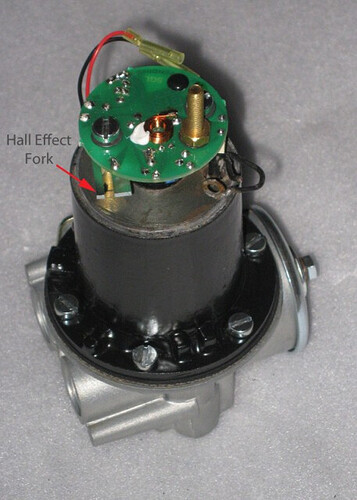 I want to try it next time I do a pump.

George, also be aware there are two filters in the tank drain plugs. 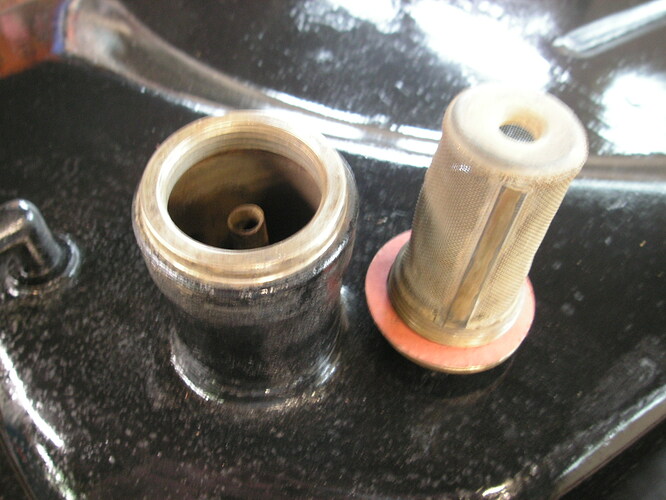 As I vaguely understand it, it is a magnet moving on the diaphragm stem to operate the coil, switching on and off.