Just starting to restore the dashboard area of my 1948 Mk IV and have the centre section of the steering wheel removed (manette hub, etc). The control levers (3 in the case of my 1 1/2 litre car) have chrome “balls” on the ends of the levers which are very pitted and corroded. Does anyone know how to remove just the ball ends off the lever arms? I don’t want to force them off and risk breaking the plastic housing, but I need to separate them to be stripped and re-chromed. Any experience or ideas much appreciated. Thanks

Forgot to up load the pictures: 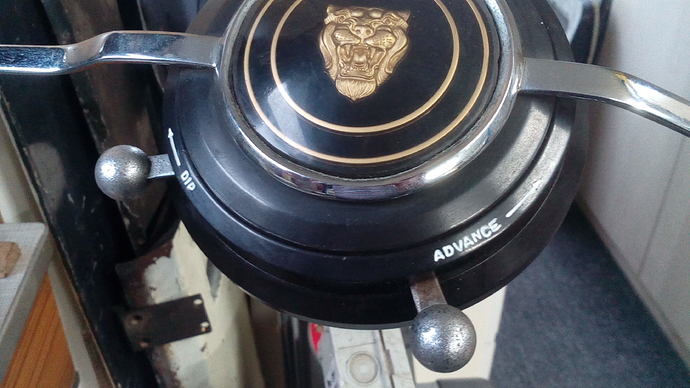 I’m by no means up on the Pre-XK Jaguars, but I’ll wager that if there isn’t a grubscrew on the underside of those balls then they were cast onto the end of the arm which has either a kink or a hole in it to stop the ball coming off.

Something is amiss in the picture, in the giant Jaguar horn button from a much later car and two chrome pieces out each side.The balls aren’t removable. They are die cast mounted onto the levers. The dip switch lever [ the short lever we just have new ones cast by lost wax process in bronze and chrome plate them. The trick of course it re-assembling it with the over centre spring . The only practical way , which is probably what the factory did was to mahe a tube to fit into the post it pivots on and assemble the over centre tag , the spring and the lever separately on that , and then slide them down onto the post. Make sure when dismantling that it’s somewhere if bits fall you can retrieve them.
The balls on the other lever , we break them off and have new ones cast lost wax in bronze, They have the small slot for the lever to fit in and one can silver solder them on with the lever in the slot.
Someone had suggested getting a ball bearing , annealing it and millin g a slot , But that’s a lot of work. Then plate the levers with knobs in place
nd you would need a MK IV horn button, which is plain bakelite, The attached pic , although a 1940 model has exactly the same steering wheel and manette as your 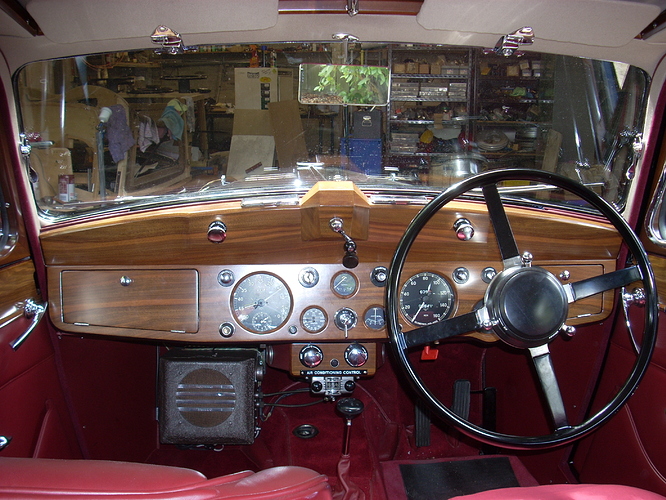 Thanks for the information - I will attempt to do something with the “balls” in place I think. Centre cap has been replaced at some time in the past as I’ve got a broken one (like in your picture Ed) in a spares box that came with the car.

You could possibly use your wrong horn button as a dust donor for repair of the broken part or maybe the other way around if you just need to fill some holes.

A Register member here has been casting a number of SS parts that were in bakelite. It;sa 2 part [ plastic], he makes a silicon mould and pours into that in a vacuum box. The has done SS 1 manettes , trafficator knobs, 36/7 horn buttons and manette bases , Ss100 wiper knobs, SS1 headlamps sw covers and owls eye tail lamp lenses.[ Jewell and number plate lenns. The finish is only as good as the one it’s moulded from. But one can either of polish or spray paint in black
Attached some sample pics I had and for reference a pic I found of an SS manette i pieces. He hasn’t done a MK IV horn button but it could be done . The studs are moulded in and depending on the part may have to be made. Or BA nuts moulded in situ. 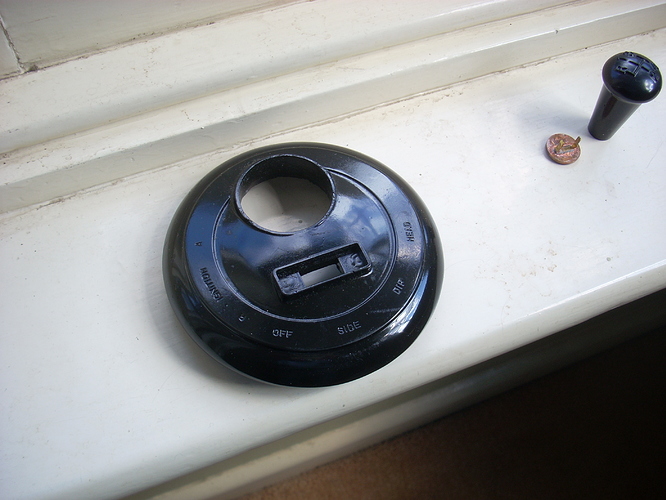 Thanks for the tip Peter. I was going to have a try at repairing my broken hub and this tip would be useful if the bits don’t glue back perfectly and I need some filler.

I will keep that in mind Ed in case my repair is not successful. Thanks.

I had a go myself at bright nickel plating the “balls” without dismantling the steering hub (the chrome plate people I normally use would not attempt anything without it being just the levers and balls being supplied to them). Worked well I think for a home plating job, but very fiddly avoiding chemicals getting where they shouldn’t go. The finish is more of a bit of a blue tint from the original chrome (which may improve with polishing) and some minor unevenness as I could not get all the pit marks out of the balls before my plating attempts. Still - they are loads better than they were, and with it all back in the steering column and the other black trim to the rear, I think it will do the job until perhaps I find some better replacement parts or a new Manette is found. 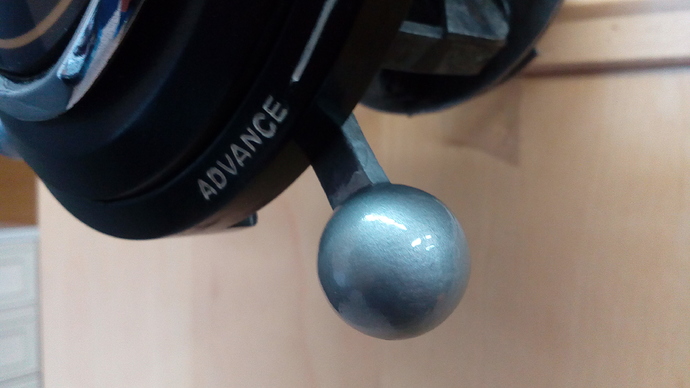 I did see a new MK IV manette for sale in UK probably about 10 years ago … from memory GBP 450.
I find JB Weld works on Bakelite.

Hi All.
I’m after some further info on the operation of the manette that also incorporates an advance and retard control.
Ed has a photo above showing the advance /retard control knob mounted on a short tube. How is it attached? How long is the inner tube
Is that actually a tube inside a tube? and how does it engage with the tube / tubes inside the steering column.
I seem to be missing some of these connecting tubes.
Are there any further photos available?
Regards, Graham.

The adv/ret plate is welded to the short tube. All the tubs at the steering wheel end are short, to alow for wheel adjustment. The manette end tubes have dimples in a row, which engage in a 1/8"slot in the lower[ stator ] tubes
The out sttor tube is , from memory 1/2: dia and the adv ret tube fits inside that. I thin I have a supply of tubes in stainless. Not exactly the original gauge but they work.

BTW what s the chrome reflection in the top left of the pic?

I calculate there must be four different size tubes.

Not sure what reflection you mean Ed?
Post the picture again zoomed in

Thanks. Don’t tweek anything by climbing up there.
If 10mm as opposed to 3/8" can you bring it down with you. If it is available I may ask for a piece as 10mm seem an odd size to find.
Nope. Have no idea what reflection is.
Cheers, Graham.

That was my original photograph showing the “balls” that I re-plated. The reflection is only of some tools on the bench I think!!

Graham sorry the tubes are.495" and .375" I used them as manette tubes for SS1s which have more tubes[3] and less wires.
I presume you have the outer stator tube, If not, MKVII [ and I suppose MK V] use the same size, but longer so could be shortened.
Do you actually plan to drive using the adv/ret. That was needed in days of octane ratings of about 60.
i.e is there a need for the adv/ret lever to actually operate the lever on the steering box. or could it just sit there looking proper.? It wold still have the correct ‘feel’ from the small spring against the plate.
Unfortunately the availability of tube sizes commercially is very limited these days.

We have inch size steel tube in the US.
I have bought exhaust pipes and body panels from both these places.
They carry Jaguar parts, they just don’t know they do.