In searching for a supplier to rebuild the power steering unit for my Mark IX, the notion has been floated that the OEM unit on the Mark IX is not sufficient to overcome the increased friction of turning radial tires vs. the bias-ply originals. I’ve never heard that argument before, so I was wondering if any of you good folks had ever encountered any problems with running radial tires on a big saloon with power steering?

For what it’s worth, I’ve never heard of that either. What are the symptoms of your power steering system. No assist, leaking etc.??

Hi Jay, I’m turning 185/15 radials on my Mk2 without power steering. It took some time and effort to sort the car out but now is quite manageable at 34psi, even when parking. I think that there is potential for power steering to “mask” underlying problems - the type that would make my unassisted car unworkable. I’m guessing that your steering is otherwise similar to mine - maybe there’s something else amiss. Like John, I’ve never heard “increased friction”, if anything I think it might work the other way. FWIW. Paul.

I also have 185s on my MK9 without any trouble with the standard power steering.
It had 175s on it when I bought it.
The pws hasn’t been rebuilt to my knowledge and I’ve had the car 21 years.
The belt does have to be fairly tight to avoid slippage and lack of assistance when parking on full lock.
The tyres are Bridgestone Dueler, and I keep the pressures at around 35psi.
A friend with a Mk9 also has the same set up.

Thanks for the input, guys! I, too, drove my Mark IX for years with no problems with the power steering, but I was running OEM-type bias-ply tires. Then the car went into a 25-year hibernation, so you can imagine what happened to all of the seals, both in the PS gearbox and the pump. The box leaks, and presumably provides no pressure since the car is a bear to turn. The only shop in the U.S. that we’ve identified to rebuild the box won’t do the work if the car is running radials; they state that the increased footprint provided by radial tires increases the load on the PS system and that will cause premature failure. If that were true, I can see their reluctance to issue a warranty, but so far they seem to be the only voice on the planet singing that tune.

Re-sealing the box is probably all that is required, but that thing is complex enough that we prefer to engage the services of a specialist. Too bad Jaguar didn’t use a generic Saginaw box.

I am running big tires on the Mark IX, by the way. I went with a common SUV tire because they’re readily available nationwide, relatively cheap, and they provide a similar circumference to the OEM tires that the car was delivered with. Therefore speedometer readings are accurate and the ground clearance is adequate.

Thanks again for your considered responses, and please let me know if you have any suggestions on sourcing a rebuild for the box.
Jay

Here in UK, I think these steering boxes, possibly with mounting variations, were fitted to all manner of vehicles, from earth movers, military vehicles, farm equipment etc.
Consequently they were over engineered enough to cope with the slightly larger tyre footprint of a radial from a cross-ply on a road going vechical
Some radials have a very flat footprint, eg. Vridestines, this might result in the engine stalling when parking, if the tickover is set very low, say at about 500 rpm.
Other than that, I can’t see any problem what so ever, and think your reconditioner is talking a load of rubbish.

I am curious as to which size modern tire you are running on the Mk9 (presumably stock wheels?) and how you like them other than the power steering issue.
I also think that the rebuilder is overcalling the radial tire issue, although a large tire could certainly make a difference - you could just tell them that you are running bias tires and forget the warranty.
I don’t have an answer to your rebuild problem, but on my Mk9, I intend to modify for a later pump and put in an alternator. On my Mk10, the pump is a common and cheap unit that bolts and pivots through holes on the right engine mount, and I believe something similar could be accomplished if you weren’t worried about originality. If the car drove fine before being put up, it doesn’t make sense that any of the hard parts in the box are worn out, so I agree with you that it likely just needs to be resealed.

It surely would be nice if the Burman box fitted to the Mark IX was a generic unit that shared many other applications in the UK, but from what research I have done, it appears to be an orphan (although there are many internal bits that match Jaguar part numbers with later units). It’s now looking like Plan A is to install a seal kit and hope for the best, even though these Burman boxes are notorious for leaking even with new seals.

The tires I’m now running are Goodyear Wrangler radials in size P225/75 R16, but without power steering I’m in no position to comment on them yet, other than to say that their rolling diameter is spot-on compared to the OEM tires. With a 75 aspect ratio, it’s not as if these are “wide” tires, at least not by appearance, but with a 225 tread width they are certainly substantially wider than the skinny originals that I used to drive on. On a road trip, they would be easy to source just about anywhere, and that’s one of my prime care-abouts.

BTW, one of the sticking points here is that my Mark IX is RHD, so that may limit my replacement options to either a re-build of my unit, or a bolt-in substitute.

Thanks again for all the input!
Jay

Thanks for the info on the tires. I agree with your philosophy about using domestic tires when possible, especially for the sedans.
As to the availability of that box, you never know until you look. If someone in North America has a RHD parts car, you might be the only one asking. Doesn’t cost anything to put in a wanted ad if the reseal doesn’t handle the problem.

I need to correct my previous post.
The tyres fitted to my Mk9 are not 185s, they are in fact the bigger 205s.
No problems what do ever…

Hi Jay,
I just tackled the problem of a leaking steering box in my 61 MK IX. It has leaked for many years but I am having my garage floor refinished and it was time to finally fix that leak. I looked over the exploded view drawings in the manuals and determined my box was leaking on the main shaft (rocker shaft) as it exits the bottom of the box. Further study showed that it can easily be removed by removing the drop arm (requires box be removed, a puller and patience) and then unbolting top plate and tapping the shaft upward with a lead hammer. The shaft had been scored and the two o-rings were hard as a rock. I bought an o-ring kit and sent the shaft out to be chromed and ground back to slightly over standard (1.124") dimension. Before and after pictures follow below. 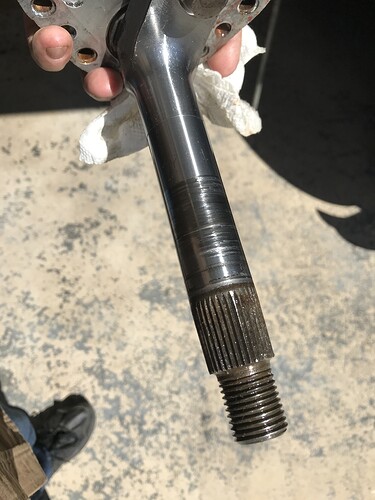 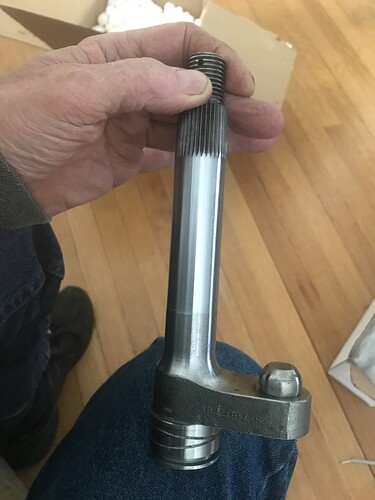 I will now have my machine shop hone the original bushing in the housing approximately .001" to fit the rocker shaft and reassemble with new o-rings.

And to answer the original question, I have run radials on my IX’s for 21 years with no issues and enjoy the increased handling ability and ride that they provide.

I started off with cross-plies by Coker, as I wanted wide white walls, but the handling was awful, so I got Pirelli Cinturato 185 and it transformed the handling dramatically.
I love this car 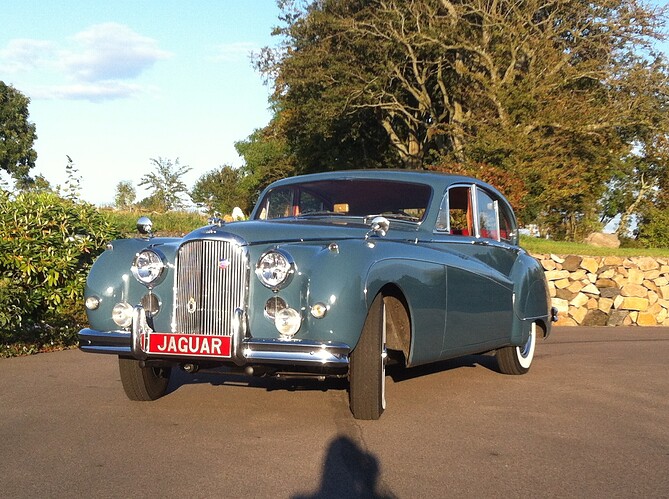 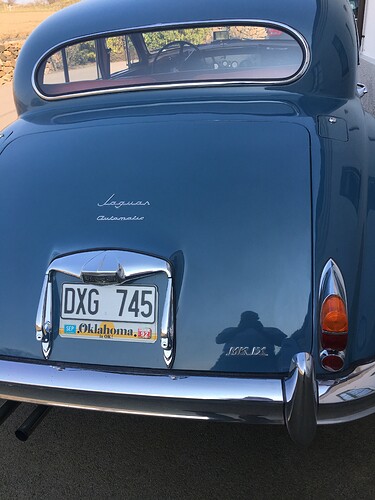 This is nice work. I have not heard of chroming as a process for restoring a scored shaft. Is this from a standard chroming shop or some special process for machine parts? If you wouldn’t mind expounding, I’d like to learn something here. I don’t know when or if I will ever get to my Mk9 project, but I’m sure it will need this. The other interesting bit would be whether you are able to correct the sloppiness common in these boxes.

Hi Ron,
The hard chrome plating of shafts is a fairly common process, as much as .030" can be added to the surface and then precision ground back. Specialty houses do this on crankshafts, camshafts, driveshaft seal surfaces, etc, I had it done by:

Speak to Bucky. The turnaround was about a week. This process could be used on rear axle haif shafts as well, to reclaim the surface where the leather seal rides. I was completely happy with the result, and had an addition .001" added to the diameter so I can resurface (hone) the bronze bushing that it rides in.

Thanks. This is helpful.

Do keep us posted when you get it all back together and on the road for a test period.

Sure will, I will get the bushing honed and the box back together this week.

Hi Tom,
Thanks for the lead on the shaft refurbishment… that may be just the solution that would work for my Mark IX (also a 1961). Without inspection, I won’t know if my main shaft is galled like yours was, or if the surface is smooth enough for merely a seal replacement. That surely explains why many of these boxes still leak even after a seal job! My first step is to get the pump overhauled, and then we’ll check the box to see exactly where it’s leaking… I won’t be surprised if it’s the main shaft. Thanks for the great photos of your machine work.

And Peder,
Thank you for the photos of your stunning Mark IX! They give me hope that someday my car won’t look like the beater that it currently is. I used to run Pirelli Cinturato 185s on my 1967 E-Type, and they were wonderful tires! That was the OEM size for the E-Type back in '61, but I wanted something not quite so skinny for the Mark IX.

Thanks again to all who have contributed to this thread… I’m making real progress here!
Jay

I was reviewing listings on other forums, and came across a lead on a shop that apparently does good work on these old Burman power steering boxes. They’re not exactly in my back yard, but have any of you ever heard of, or had work done by Summit Brake & Steering in South Africa? They have already responded to my enquiry, and to their credit, they didn’t say that they would refuse to rebuild a box if I was going to use it with radial tires.

How did it turn out?