I just had a Mark V 3.5L engine rebuilt. They seem to be having trouble finding a thermostat. I have tried sending an email to the recommended source, Alan Gibbins, without success. Does anyone know another source for a thermostat or a new address for Alan?
Regards,
Dennis Trull

Think most are just blocking off the engine return and running the circuit through the radiator.
Alan Gibbins at alan@ssjaguar.co.uk might have have a fix?
The one I saw involved quite a lot of drilling, adapting

Hi Dennis, there are multiple solutions to your thermostat question. A good source for these ideas is an advanced search for “thermostat” with restriction to the Pre-XK threads. Ed Nantes has several comments relevant to your decisions (e.g., under a 2004 thread I started titled Mark V Thermostat Repair and Operation).

In Los Angeles basin area (where you and I live), I have run Mark V 3.5L engines just fine with the bypass completely blocked while having direct flow to radiator either at the level of flow allowed by an open but not functioning bellows or by full flow. It is essential to have the bypass blocked if the choice for non-functioning thermostat situation is chosen. I have seen 3.5L engines with non-functioning, or absent, thermostats with bypass not blocked, they overheat pretty rapidly in Southern California.

It is pretty easy to block the bypass flow with a suitable length and diameter wooden dowel in the thermostat housing bypass hose adjacent the housing end. Choose the dowel location so that it cannot wander

The difficulty of using modern thermostat elements if achieving bypass control. Ed Nantes wrote a description of how to modify an existing housing to take a modern element.

AN EASY CONVERSION FOR Mk4/5 THERMOSTATS.

Since late side-valve cars, Jaguar have used a thermostat that is a 2 way switch. When cold the water runs through the bypass hose and as the temperature rises it is diverted through the radiator core.

When the originals got old and gave up the ghost, a variety of fixes were tried.

Removing the internals altogether… not a good thing as the water will prefer to take the easy route through the bypass rather than fight through the radiator core.

Blocking the bypass and putting in an on/off thermostat… better , but takes longer to warm up which increases wear.

Making a new housing to incorporate an XJ6 thermostat… good but not cheap.

This conversion is suitable for 6 cylinder Mk4 /5 thermostats which have the bypass entering the housing in the direction of the centerline. i.e. not SS and 1 ½ litre cars where it enters at a tangent.

The original mechanism blocked the bypass by blocking the feed which faces the rear of the car.

In the conversion, the bypass is turned 180 degrees so that the XJ6 thermostat can push from the front and close it that way.

The first step is to remove the old brass mechanism… unsolder the nut and remove the screw at the front to take out the closing plate and the rest is pretty much force. Cut the 4 tabs which hold it in at the back but don’t damage the housing. 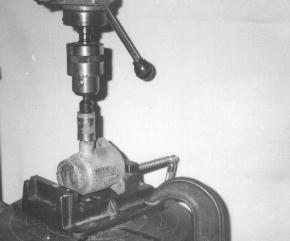 It’s good to clean the housing by sandblasting as you need it clean to braze it.

Mount it in a vice with the bypass vertical, and use a 1 1/8” hole saw [ a good one not the hardware shop cheapies ] in a pillar drill. Remove the pilot drill BEFORE starting.

The saw will cut around the bypass, being guided by it, to separate it from the housing.

The saw will bottom out before it cuts completely through but a light tap with a hammer on the end of the bypass will sheer the last 1/8” tags of metal remaining.

The bypass is now free and can be rotated 180 degrees.

It has a 3/8” hole through the centre and a with a piece of allthread and washers and nuts it can be held in place with the large opening squarely facing forward while it is brazed. It will sit slightly forward up against the edge of the hole but not to worry, the bypass hose has enough give to compensate.

Start brazing at the front edge and finish at the back.

Tap the 3/8” hole remaining in the centre to 7/16” [ UNF ] and shorten a set screw so the it is just long enough to block the hole when held in with a spring washer.

The XJ 6 thermostat mounts in the front opening. To get the correct spacing between the flange and the bypass opening, I insert a ¼” [6mm] spacer. The local laser cutters make them for me as a ‘washer program’, but if you haven’t access to one they can be cut from brass or steel with a hole saw, turned off the end of solid bar or if your local steel supplier has 2 ½” thick-wall tube he might cut a slice off for you.

Braze , silver solder or soft solder the spacer in place and mount the thermostat with 2 1/8” [preferably] stainless steel screws tapped in to the spacer.

Here’s what it looks like finished with one of the spacers shown for illustration. 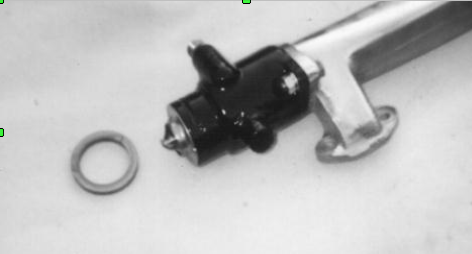 Oh, and while not mandatory, drilling a 1/8” bleed hole in the thermostat will make it easier to fill the radiator.

My '38 SS came to me with no thermostat and nothing blocking the bypass.
Who knows how well it worked or for how long it had been that way.

If you remove the broken thermostat, what you see is this. 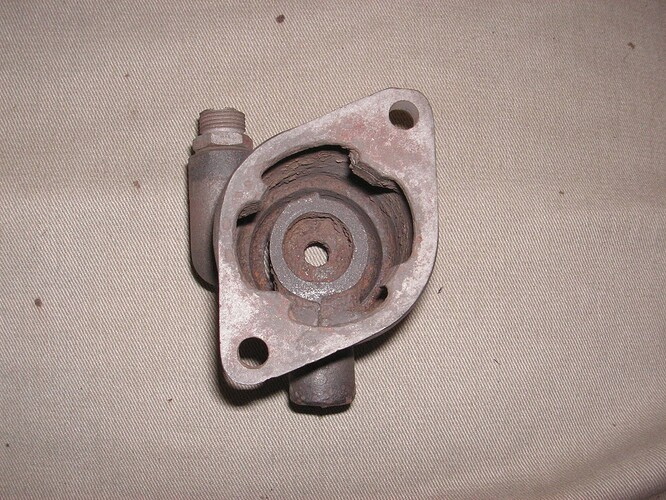 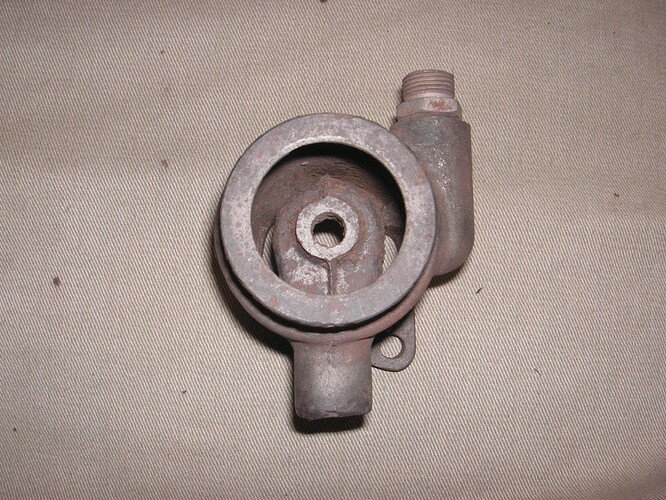 pict00021920×1440 438 KB
Apparently I failed to take a picture, but what I did was put a stainless steel 1/4" bolt through the center hole with a large fender washer and a stainless steel nut and lock washer.
It has worked fine for me, slower warmup perhaps, but that hasn’t mattered in summer and I don’t drive it in winter.
1 Like
Dennis_Trull (Dennis Trull) October 2, 2022, 6:44pm #6

Thank you for the information. The engine is out being rebuilt and I will attack this problem as soon as I get it back. I am sure I will have more questions at that time.