I feel like Bertie Wooster, you never know when this car is going to slip one into you next.
I was not happy with the surface finish on my door so I took it off to work on it.
Why I didn’t see this before I can’t imagine, but I saw it today because I was looking up what all the other holes were for. I’m pretty sure there is an extra hole in the door that doesn’t belong. To the lower right of the 4 slots. 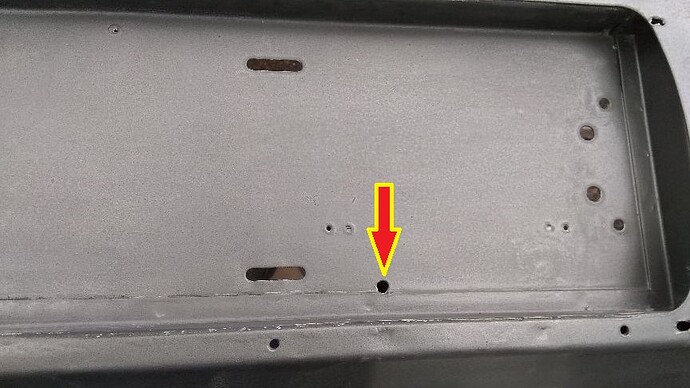 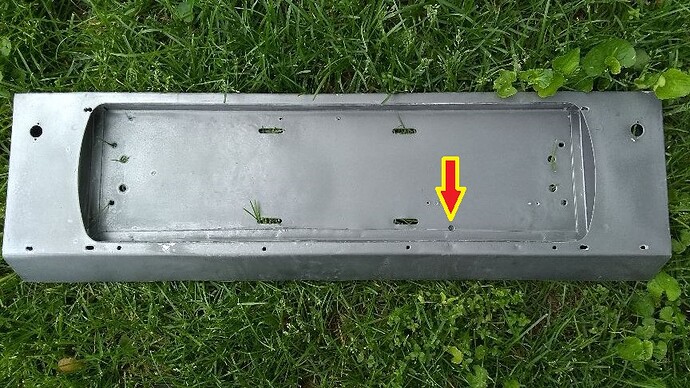 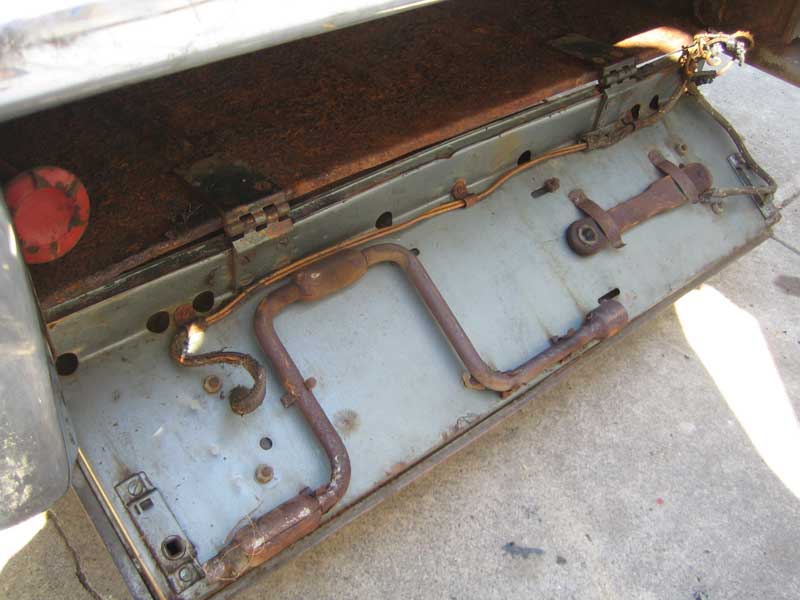 Trying to guess why someone would put one there. Maybe for an add-on license renewal tag something like this? Illinois never had such tags, but maybe some other state did.

28800×600 39.9 KB
It’s not for a UK or Euro wide plate. My car has always been in the US afaik. And only one extra hole.
Could be a factory mistake? The SPC doesn’t list separate doors for UK and US, so I suspect they punched holes in doors for US plates or wider plates as needed. Somebody got careless with the punching machine? For US delivery cars they gave us 4 slots, because our plates were not a standardized size at that time. I don’t know what they did for plate mounting holes for the UK, Europe and other countries.
Roger_Payne (Roger Payne) May 26, 2022, 10:15pm #2

MarkVLockerLate3029×1282 432 KB
.
Not exactly same position, same height but a little more out-board but this shows the fitment of a Lucas push-pull Switch that allowed the rear tail-lights to be manually isolated. The local expertise remains inconclusive as to why this Switch was provided in 1949/50 Mark V as delivered new through Brylaws (Australia) main Melbourne (Victoria) Dealership, but not it seems in NSW or other States, so it is thought some local Victorian Lighting Regulation, albeit still cannot find the logic, nor indeed any Victorian Road Legislation that would indeed allow such a switch to be fitted, let alone require this local modification. Seems the Switch and the wiring was added by Brylaws (Melbourne) on receipt of new Mark V destined/sold into the Victorian Market… Smacks of WW2 era ‘black-out’ requirements, but why still in place in 1949/50 and not in Mark IV… So maybe something similar with your car…
But if anyone can elaborate on this Brylaws (Melbourne) added switch/wiring, or comment on any Mark IV or other than Victorian new Mark V I would love to here…
Timothy2963 (Timothy M Fox) May 26, 2022, 11:19pm #3 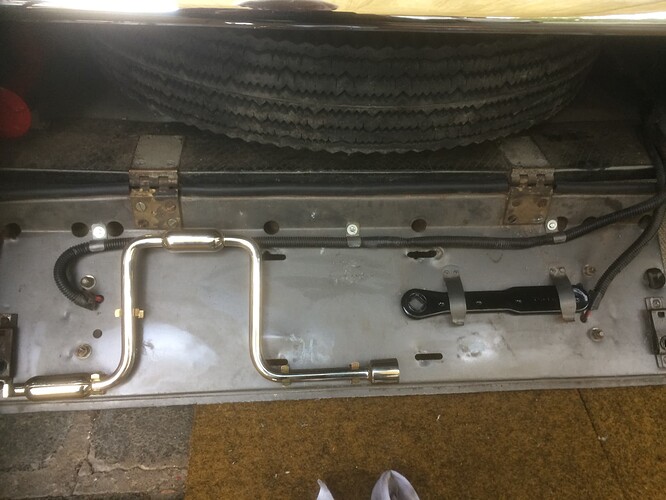 Mine, a Perth delivered car when new.

I recall reading somewhere that an external switch had to be fitted to operate only the tail lights for night time parking on a street. This was to reduce the power drain from other lights on the parking light circuit. This might have been a law applying to very few states, maybe only Victoria, and I suspect it was withdrawn early in the '50s. The article I read was describing it fitted to an early FX or FJ Holden.

In our family we had 1950s Renaults and Peugeots. These had a small light fitted to the C pillar which was operated by a separate switch for left or right operation. They had split lenses - white to the front, red to the rear. So there was a similar ‘lighting-up’ rule in Europe. 6-volt batteries in that time also meant flat batteries would have been all too common, with parking lights on all night.

Well, that was an unexpected answer. Amazing the obscure and entertaining paths that this hobby takes us. Thanks Roger, I love it.
So, something along the lines of the hole in my '38 SS roof, 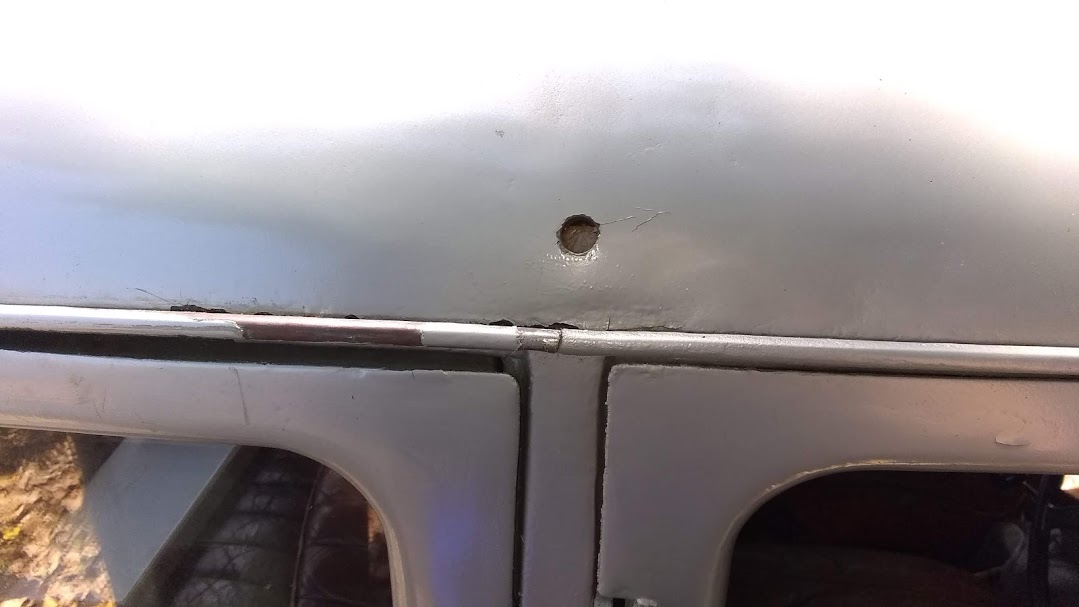 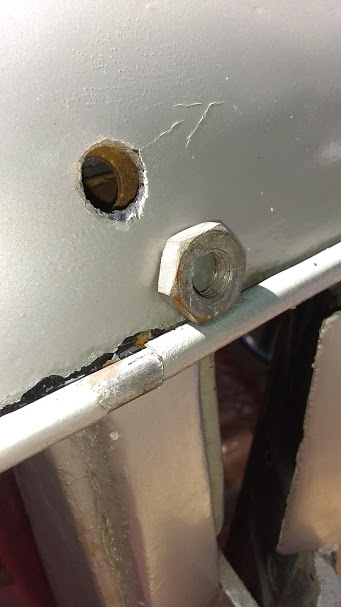 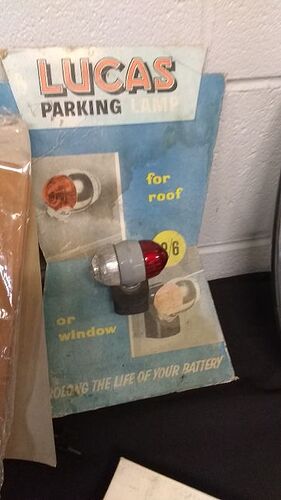 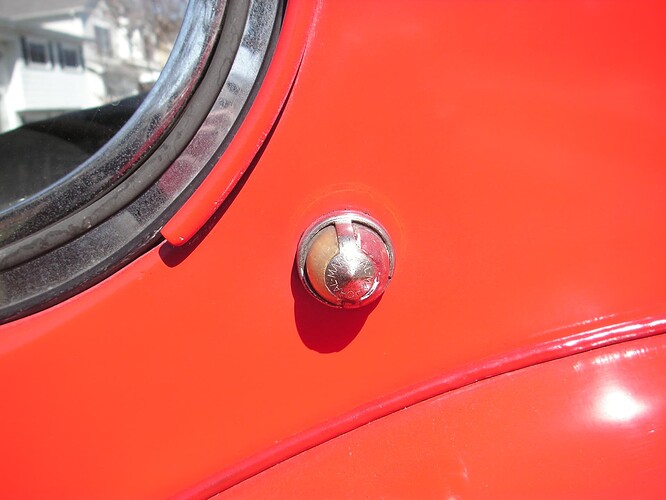 But to power just the tail lights separately, or just one light, you would have to run a wire all the way to the front, probably through the chassis rather than opening up interior upholstery, and choose a terminal on the voltage regulator. I’m sure Brylaws could do it easy enough. An ON/ON switch might make sense, to power the tail light either through the side light circuit or the separate wire from the VR. Yeah, that would work.

Well, I never heard of such a law in any US state, but then I haven’t heard everything. And an overnight parking light law could be local rather than state-wide.

If it was for a switch, probably not a Lucas switch as the hole is only 1/4" diameter, anyway if so it was long gone when the car came to me, and no evidence of one in the wiring.

Hi Rob, no hole on the Mark V in my garage where your arrow points.

Ok thanks Roger, confirming Tim, no hole except in Melbourne.

I will plug weld the hole tomorrow.
I’m still curious what they did for plate mounting holes in the UK.

Aren’t they the four elongated holes in the middle?

The slots in mine measure 4.75" on vertical centers, standard for US plates which were 5.5" high at that time, though now they are 6".

But the UK plates I have measure only 4.5" high. So the 4 slots wouldn’t be right for them; if they used 2 of the slots it would not be centered and the other 2 would show and look funny.

I thought maybe they did 2 holes for the outboard ends of the UK plate?

The extraneous hole is plug welded and the door repainted.
Here’s an assembly tip; put the chrome, tool clips, wiring and lights on, in that order, on the workbench where it’s easier, before you attach the door to the tire tray.
The door harness from Rhode Island has these unsoldered bullet ends. Why? Because if they had soldered on the bullet ends, you can’t get those wires through the rubber grommet in the license/reverse light. Even with the bullet ends off, it is still a tough job fitting 3 wires through a 1/4" hole. 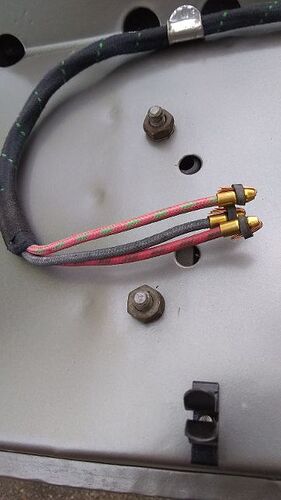 BTW there is a 1/8" thick rubber spacer pad in there. 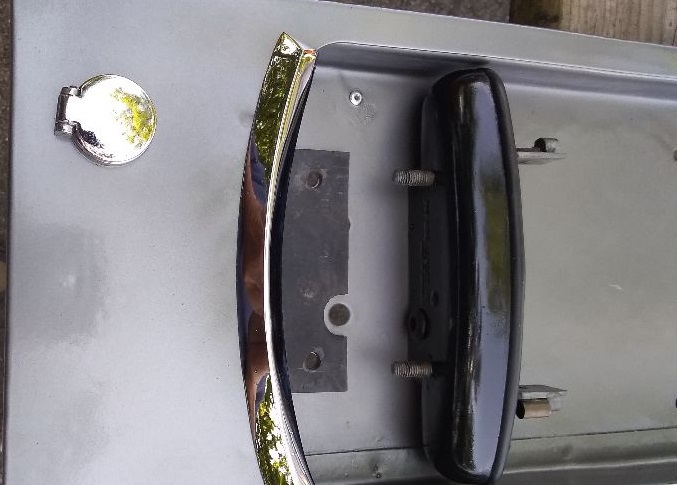 Continuing on the spare tire door.
The sealing strip kit from Worcester was only BD.2159 which is a beehive shape for the bottom edge, not the sides and top. They gave me about 30" length, enough for all 3 pieces.
They don’t offer the BD.2167/1 for the sides and top, so I measured and I figure it was probably 1/4" x 1/2" closed cell foam rubber. McMaster-Carr offers it in several elastomers and densities. I chose 93725K134 Ultra-Soft Ultra-Weather-Resistant EPDM which is for outdoor use. I decided you want ultra soft otherwise it might be hard to get the door closed compressing all that rubber foam. And you don’t want self-adhesive because the adhesive would come on the 1/2" side rather than the 1/4" side where you want it. I used E6000 adhesive.
The SPC says the length is 55-7/8" but maybe they just offered it in a full length rather than 3 pieces. I used about 53" and found I could wrap it around the corners. I don’t think I like that corner look, so I may cut them there. So anyway a 10 foot roll is enough to do the car twice. 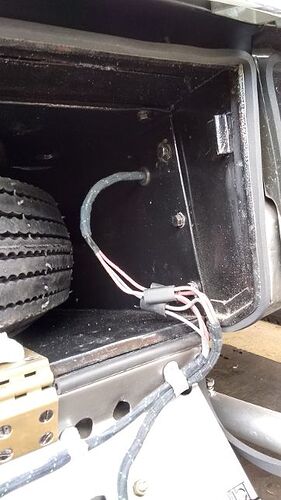 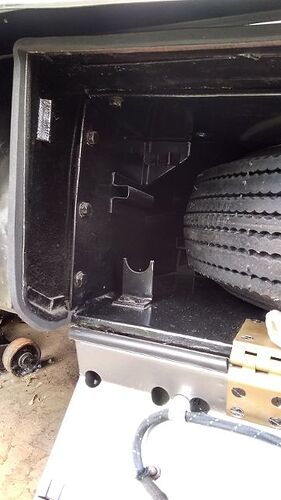 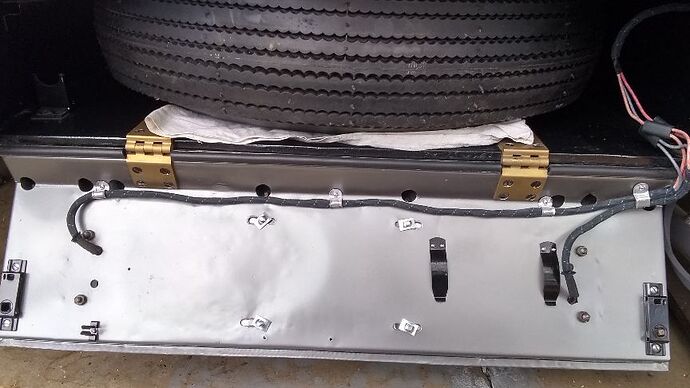 Wiring harness clip on the side panel. 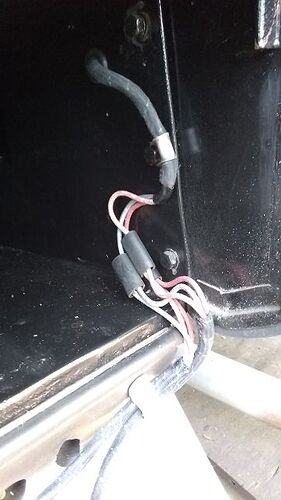 Edit:
Wheelbrace clips came today, not quite an exact duplicate but I suppose as close as I’m going to get. 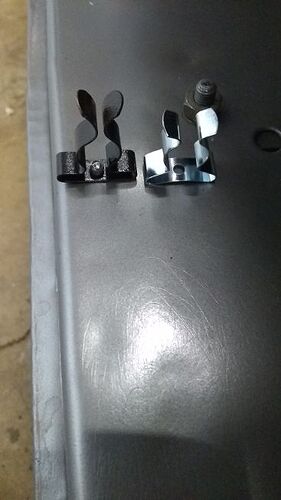 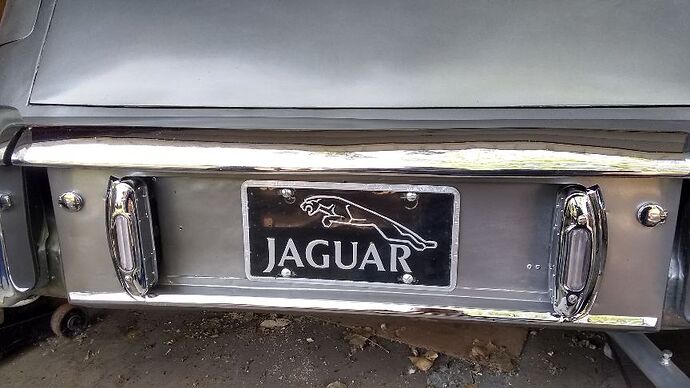