I have a Mark 2 3.4 automatic which drives great. The transmission was changed on the car not long ago and the paperwork indicates it has now got an XJ6 transmission. The details are not immediately clear as to what year or model of transmission. Only that it is an XJ6 unit. The issue I have is the car is doing 3500 plus RPM at 62mph. We have checked the speedo and that is fine. From what I can find, the rpm at this speed for my car with the factory transmission should be around 2800? The car was produced as a 3.4 auto and so the only relevant change is the transmission swap. Does anyone have a 3.4 auto and if so, what RPM are you doing at the legal speed limit?

Disadvantage of the XJ auto box, there is no direct drive.
Therefore there will always be slip, hence higher revs.
I think need another diff ratio, default on a MK2 is 3.54.
Revs at 100km/u is standard about 2900 RPM

Our 3.4 auto with standard transmission. 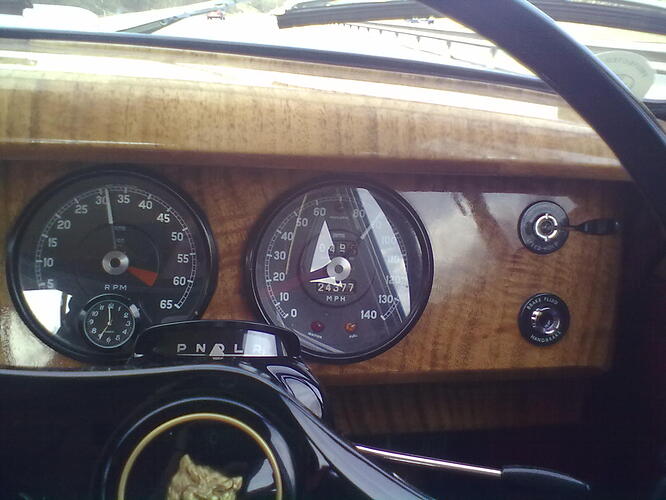 You either have an iron case BW8 or 12, the former can start in second gear, the latter has a vacuum line and electric kickdown.

Neither have direct drive but the difference between holding speed and engine braking is less than 300 rpm.

Disadvantage of the XJ auto box, there is no direct drive.
Therefore there will always be slip, hence higher revs.

I think all the XJ trans have a 1:1 final gear, but lack a torque convertor lockup facility, which I think the DG250 did have ( I could be wrong about both factoids)

However, If I am not wrong then something is hard to explain, as lack of TC lockup usually only accounts for about 10% RPM drop, or less, in vehicles that do have it

You’re right as you usually are, and I checked while going 60, the rpm drop between sustaining speed and overrun (no throttle) is indeed no more than 300 rpm with a BW8 transmission (later XJ transmissions got worse because they used higher stall convertors).

I imagine proper lockup direct drive will cause less than that much of a difference.
Let’s say 200 rpm less vs. a 1:1 gear that goes through the convertor.