Hello all. This will be the first of many posts that I hope to illicit some wise advise from all of you experts for this new Jaguar person. I have a 1963 MK II that I intend to do a ‘nut & bolt’ restoration on, but also, some upgrades to the driveline, suspension and brakes, hence exact factory originality is not my end goal. Today for the first time, I noticed some thin/narrow bumpers on a 1968 MK II. And now I am ‘sold’ on changing over the big MK II bumpers to the thin/narrow ones that I saw on the 1968. I also saw that the Daimler 250 looks to use a thin/narrow bumper. Is it as simple on the rear as installing the Daimler or late MK II rear valance (beaver panel)? Detailed instructions on how to achieve this will be most appreciated. I have zero concerns about doing all of the work required, but will require some wise advise about exactly what is required. HA - I hate purchasing incorrect parts. Thanks. CHEERS from AUSTRALIA.

Welcome to the group! You have come to the place where the greatest love, experience and knowledge of Jaguars is likely curated and cultivated. You can find all the answers to your questions as the topic has likely been covered before. If not, you can be sure that any number of experts will be happy to weigh in. Although I do not have a Mk II, I love the model myself and agree that the thin bumpers as found on the later year lower spec models is much more attractive. If I were to acquire one of my own, it would have these bumpers as well in addition to a number of other tasteful appearance and performance mods.

Welcome aboard. Each to their own, however I prefer the ‘fat’ bumpers! Others will advise / confirm but I ‘think’ fixings are the same.

I just happened upon a YouTube video of a comparison between a Daimler 250 V8 and Jag Mk II 3.8. The upscale Daimler had the slim bumpers as well. Looks like Jag used the slim bumpers on their highest spec and lowest spect models.

Thanks for the responses. I would say that from the rear I like the thin bumpers better - the front - not so sure - HA - possibly a big front bumper and thin rear - HA - just kidding. And strange that the ‘lower spec’ and the ‘higher spec’ ends of the model range seem to get the same bumper treatment. Something around the rear is different, and from my casual look so far, it seems that the thin bumper version has a different rear valance/beaver panel. If I do go to the thin bumpers, that will be where I need to put my ‘thinking cap’ on.

No, the MK11 Jaguar and the early V8 Daimler-Jag both had the double bubble bumpers, the later 240, 340 and very rare 380 jags and the Daimler-Jag V8250 (I think, don’t quote me on that designation) had the slim line bumpers.

That is correct, part of the cost\ price cutting that went on to make the cars competetive with newcomers like Triumph 2000, Rover 2000. Also Ambla interior and loss of fog lights, a fate also bestowed upon the S Type.I believe the front bumpers are the same as S Type, but rears are different. The rear valence is different as the narrower bumper exposes more “skirt”, but I’m not sure if they did anything to the front.

The front of the body does not change with the narrow bumper, I don’t know about the mounts my 340 has brackets forward and aft of the front crossmember on each side with 2 adjustable arms “14.5” either side of the car centreline.

Yes the later 240, 340 & 380 versions were low cost versions of the older models which continued in production after replacement models were introduced, a la Ford Pop or Citigolf versions. Manufacturers still do that today if older models are still selling well.

Yes, I spoke too soon and didn’t think that perhaps I was looking at an earlier Mk II with fat bumpers being compared to a later Daimler with slim bumpers. Thanks for the clarification. It’s odd that the cost-cutting bumpers look more elegant to me.

Matter of peronal preference. I remember when the 240’s came out, I thought they looked a bit anemic. Styles change over the years.

Hi Moby
I have one of the late 3.8 340,s which have the slim bumpers that you have taken a liking to.
The 240, 340, and the late V8 250 Daimler all have the same slim bumpers
The 3.8 and 3.4 S types also have the same slim front bumper.(different rear)
The part numbers are BD25273 for the front and BD 30081 for the rear
There are a few differences with the fittings and suggest you get hold of a spare parts manual
although the different brackets are not too hard to fabricate
On mine, there is a small extra panel on the front hiding part of the front subframe and on the rear is a slightly different lower panel
I agree with you that the slim bumpers are a little more sleek but it will need a little work to fit them
Good luck
Brian 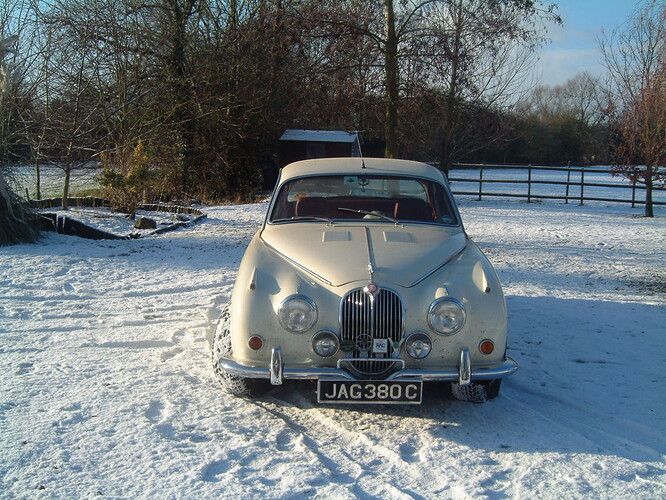 That would be quite a rare car I believe.

Personally, I always found the narrow bumper more attractive, less heavy handed, more modern. As an aside, a chap called in to see me with a 340 mod when I had my E Type asking if I would sell. I took the 340 for a drive, and found it an astonishingly smooth car; sometime later I ended up with a 3.4S. I do think the 3.4 is the best engine.

Hi Robin
Thanks for your interest in my Jag
There were twelve of these taken off the line and fitted with straight port head 3.8 engines
and one left-hand drive sent to Europe
I have had mine just around 21 years and will probably use it for the last time this year at our
local JDC Meeting in Norfolk next Wednesday
Total mileage is just over 104,000 and it was 55,000 when I bought it in 2001
I have just had the bottom half repainted and had the bumpers off then
I have to smile when I take it out as I love the old Jags.
Cheers Brian 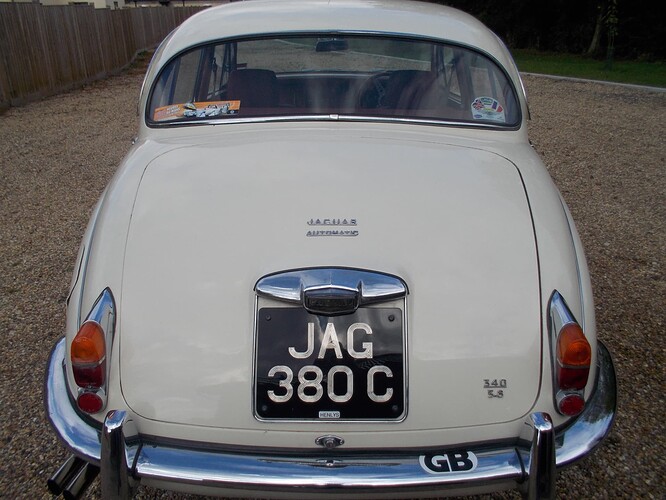 Hi Kevin
Thanks for the interest
The 3.8 340,s were a variety of colours and specs taken at random to customers that wanted 3.8 Jaguar Mark 2,s although they had been deleted from the catalog
The straight port heads were fitted and on mine, the inlet manifold was polished inside as was the head
Engine numbers did not follow the normal Lx XXXX. but were numbered SE or EE
Some were manual overdrive and others were Borg Warner 35 autos.
When I decided to exchange the carbs for rebuilt HD8s I was surprised to find that the ports were 2 inch diameters so I didn’t need to enlarge them
Cheers Brian

Thanks Brian,
Back in the day, the 340\3.8 was some kind of semi-mythical beast that no-one really knew anything about, so it’s good to get some first hand intel. With the Type 35, does your car have the smaller transmission tunnel as fitted to the contemporary Daimler 250? Ditto 240\340, as I guess they also moved to 35 from previous DG box. What is the claimed horsepower of a 3.8 with SPH and 1 3\4 carbs, did the factory specify?

Hi Kevin
You have raised a few interesting questions.
The gearbox tunnel is indeed the smaller type, the same as the Daimler equivalent
and the FG35 box replaced the Borg Warner DG, I believe that there was a mod done on the 35
for the 3,8 models
Regarding the BHP of the engine with SPH, no figures were ever issued however the 420 with SPH and 2-inch HD8 carbs was rated at 245BHP so my engine should be rated between the 220 BHP of the standard 3.8 and the 420 I guess that would make it 230 BHP
I have looked up my chart and there were 5 autos and 8 manuals with all synchro overdrive boxes
making 13 340 3.8,s and 6 had the Marles power steering option.
To my knowledge, there are 4 survivors
Cheers