Good idea Peter, but probably means I have to take it apart again to make the chamfer!!

Other thing that might help is checking out various antifreeze and additives to see if any give a lubricating property? Don’t know if Evaporust is available in the UK?

Yes, keep the chamfer idea for the future. I haven’t found it necessary in my own thermostat.

Another thing to check for why there is an escape around the cap. A colleague with a 1.5 had this occur because the cap, when tight, was actually tightening on the radiator shell lip first before fully compressing the seal. For some reason, the radiator shell was higher than it should be at the cap neck. Everything was connected correctly between the radiator frame and the shell, so there was no obvious reason why there was this discrepancy. The only simplistic way to overcome this is to make an additional thin packing washer under the cap seal.

For some reason, the radiator shell was higher than it should be at the cap neck.

In my short time with MKV’s & MKIV’s I’ve seen quite a few differing heights of the radiator in relation to the cowling / shell. Most of the time it had to do with the thickness of lower rubber mounting bushes, so I was told. Possibly the rubber mountings have compressed / collapsed with age? Also, Worcester Classic Spares in the UK make a really lovely rubber cap seal.

Don’t know if Evaporust is available in the UK?

On a quick online check for Thermocure I found this. There were many other suppliers such as eBay and Amazon.

I haven’t found it necessary in my own thermostat.

It’s a pity that no one has reproduced the parts for the original thermostat as it’s such an elegant design. I know that in the Service Manual Jaguar says that they need to be returned for exchange with the distributor.

Thanks for the link to the Thermocure info - don’t know if Evaporust is any better as I’ve never tried any additive in any of my cars.

I did find servicing the thermostat my self relatively easy, but if the bellow goes then finding a replacement might be impossible.

The cap does fit to the seal OK, but on my 1.5 litre I did notice when rebuilding the car that the chrome shell was sitting a bit high when I fitted new rubber support bushes below the radiator. I squashed down slightly the upstands on the inner surround frame - I need to check if the rubber seal in the cap is making a good contact with the neck or I will fit a thicker or additional rubber. 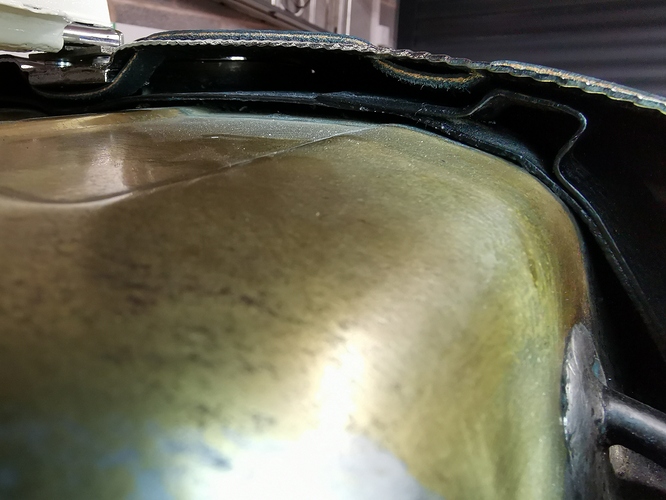 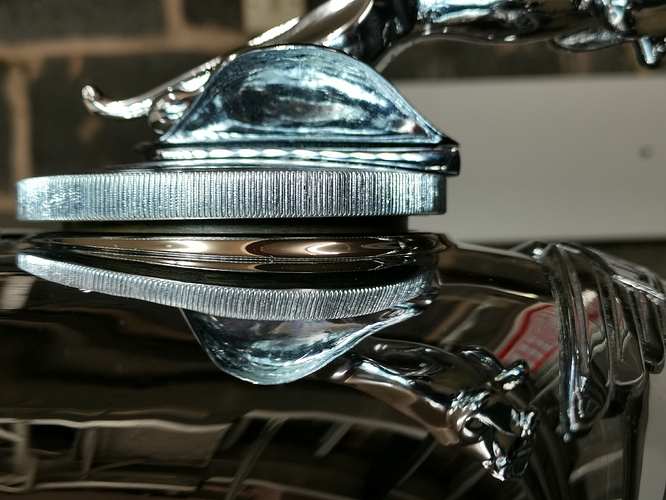 I need to check if the rubber seal in the cap is making a good contact with the neck or I will fit a thicker or additional rubber.

The radiator cap looks pretty good though some might say it’s a little high. The Worcester Classic Spares UK rubber seal is really good and sits flush with the underside of the cap. It’s an inexpensive rectification.

It may not cost much… but does it fix it?

It fixes the seal.

I think the thermostat itself is at fault, either sticking intermittently or no longer operates at the correct temperature. Testing in the garage the engine warmed up as normal but then the temperature gauge continued to rise to just above 90 degrees, the radiator top was just aired, but the thermostat housing too hot to touch. I switched off the engine and I could hear boiling water in the block, a sudden loud click, and a stream of steaming water out of the radiator overflow pipe onto the floor.

I suspect boiling water becomes pressurised within the engine, the thermostat finally gives in and opens, jet of steamy water suddenly released into the expansion tank, and the only way out is via the overflow pipe (at least now its not spurting out below the radiator cap!!). It looses about 2 pints each time it happens, so it’s the expansion tank full. The radiator itself then gets much warmer, so water must have started briefly circulating to some degree.

I can’t get hold of spares for the inner thermostat workings, so I think I will remove this part altogether and put back the empty housing (as I will not drive the car in cold weather). Has anyone done this “surgery” and has it been successful with no side effects to be aware of?

Hello David, one step to test is to put the assembled thermostat in a pan of water along with having a thermometer handy. Heating the water will allow you to observe the thermostat opening and temperature of opening. When I look at the thread above, it seems you observed the expansion of the bellows element alone and did the expansion of assembled thermostat only with a torch on the bench without temperature information. Testing the full assembly will guide thoughts about friction in the assembly.

To run without the bellows assembly, a means of blocking the bypass flow can be used. Rob has one blocking method shown above. Another is to remove bellows and put a wooden dowel piece into the bypass hose. The dowel piece should be close to hose inner diameter, long enough to prevent dowel from moving past a hose bend into the water pump, and far enough into the hose to avoid fouling the the hose connection to the thermostat.

Just as Roger suggests, it’s definitely worth placing the assembled thermostat in a pan and heating it along with a thermometer. 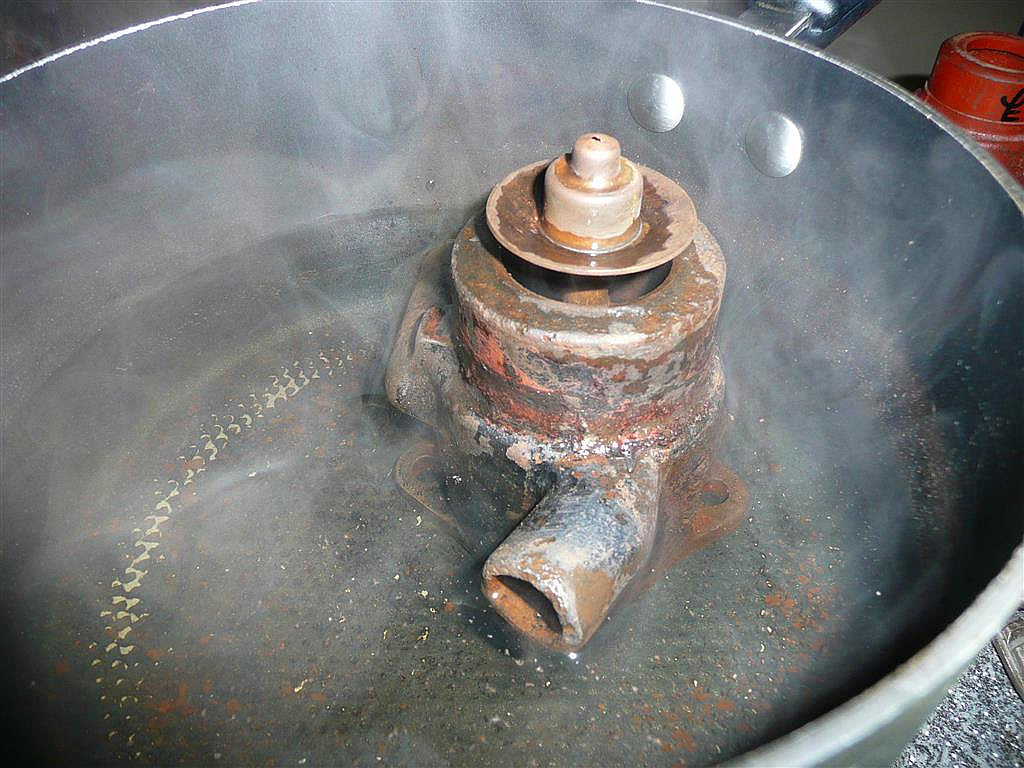 I will retry the whole thermostat assembly in a pan again. It did seem to work previously when I first stripped and assembled it, but clearly something is not correct now. If I’m not happy with the bench testing I will look at removing the inner workings and block the bypass.

Out of curiosity why can’t the bypass be left open with the main radiator feed? Or does the water short circuit a good radiator flow if not blocked off.

If the bypass flow is left open, then two water flow paths exist. The engine-heated water can flow back into the water pump via the bypass and the other path is through the radiator. If the bypass is left open, the share of engine-heated water that flows via bypass will not have been cooled by flow through radiator. I expect the coolant to be substantially warmer than if full flow through radiator. You could try running with bellows out and no bypass block and observe running temperature.

On the other hand, I have observed another owner’s 3 1/2 Mark V boil-over problem solved when we opened his thermostat assembly, discovered no bellows present and no bypass block, and installed a dowel in the bypass. If my memory is correct, your car is a 1 1/2. I have no direct experience with the 1 1/2.

I removed the thermostat again and found that the device did not open until 100 degrees C (boiling) - and then with a pop not a smooth opening!! 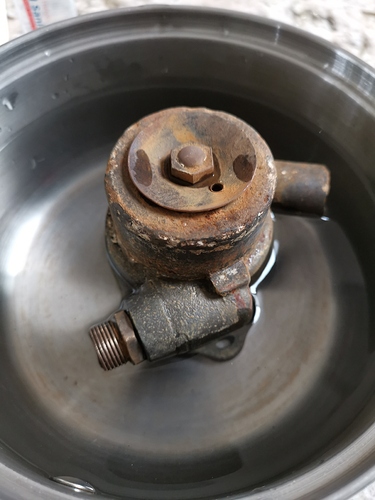 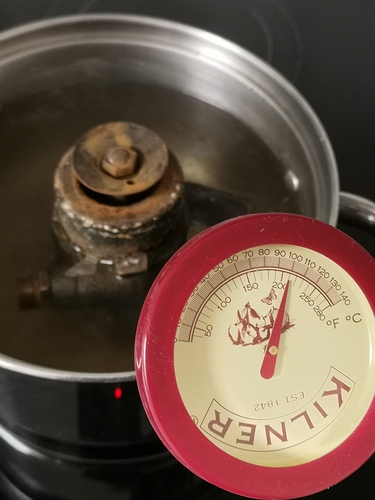 I took it apart, soaked it in undiluted Evaporust overnight, and with some fine wire wool carefully cleaned the barrel and piston. Back together and it now works smoothly from about 65 degrees to fully open to block the by-pass, closing again when cool.

Job done. Back in the car and no longer the boiling problem so far. Thanks to all for the advice and information.

I took it apart, soaked it in undiluted Evaporust overnight, and with some fine wire wool carefully cleaned the barrel and piston.

It might not hurt to run the Thermocure in the motor for a few weeks then flush the system just be safe?

Thanks for going through the trauma and hard work, I have learnt so much.

Yes Tim - I’ve also run the Thermocure Evaporust through the water system for a few days, then given it all a good and repeated flush out. It certainly removes significant “rubbish” as I filtered the flushed water to see what it was like.

Did you happen to take a photo of came out?

Once we are through lockdown I will be doing the same thing! It would be nice to have my MKV 3.5L car down a few degrees, especially in traffic or on a hot day.

So glad that things worked out for you.