I am putting the engine back together and trying to decipher the cooling system as the hoses shown in the factory parts book don’t match at all points. Has anyone else seen this and does anyone have a schematic of how your system is arranged? Mine is a 1966. 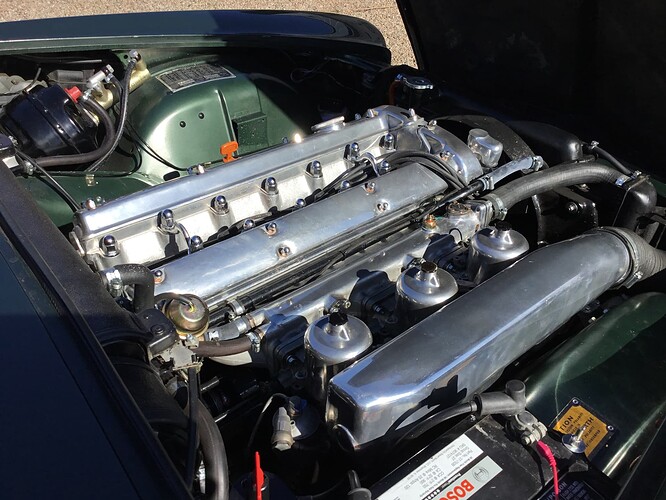 The cooling system is different in a number of different years. I have seen at least 3 iterations in post '65

If the water pump is not original, that can cause a lot of confusion

Thanks. Beautiful opalescent dark green. I can tell that the radiator is different than mine and my overflow tank is on the left wheel well. Your radiator appears to be like the one in the parts book.

@Jeff_Schroeder, does your MkX have its cooling system intact?

I have the original radiator and head tank, a new water pump/thermostat, and all of the heating system. Plus a hose kit that was partially used many years ago. I think where I’m stuck is with the hard pipe for the bypass assembly. My radiator configuration is different than plate 39 in the parts book with the hose connections on the radiator in the book pointing inward and mine are pointing rearward. I don’t have that hard pipe and I am trying to get an idea of what it looks like so I can try to locate or fabricate one. Thanks for your question.

I have many MKX and 420G parts. I can check the pipes I have

It is - will post pics in just a bit.

Pics see if they are helpful or if you need additional. 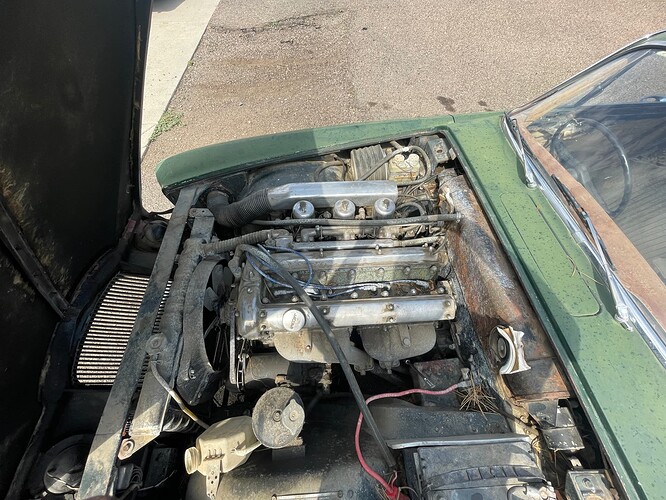 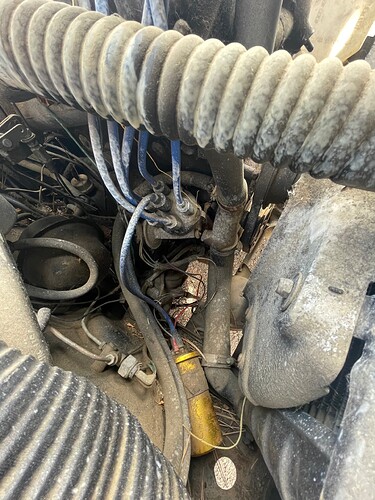 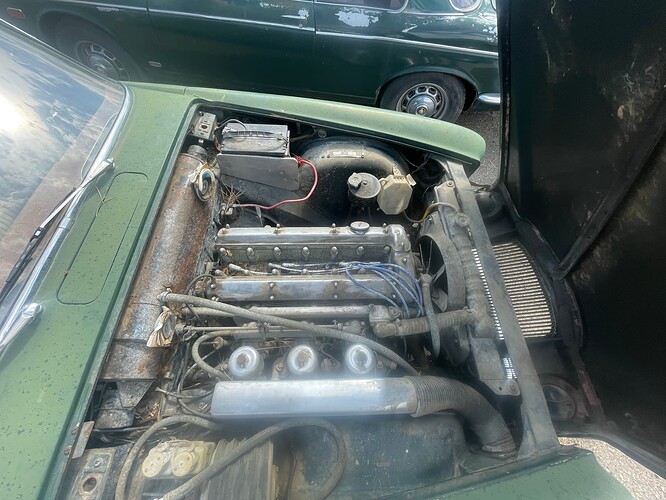 I also have a '66 and its configuration is identical to the parts book diagram. Perhaps something was changed on yours. The item 20 that Tony mentions is a problem, being plain steel and prone to rust. I tried to have one made in ss, but could not find a local fabricator to do that. I’m using an old rusty one right now. The header tank is also plain steel and prone to rust out - mine is new in aluminum, also a custom job.

It’s bit hard to tell from your description just what is different about your car. Perhaps you could give us some more photos?

Thanks. Beautiful opalescent dark green. I can tell that the radiator is different than mine and my overflow tank is on the left wheel well. Your radiator appears to be like the one in the parts book.

sounds very much like yours has been changed from original, which probably should have the header tank directly over the radiator. I have one sitting in my spare parts pile…as Ron observed, the header tank is mild steel that rusts like hell

Later models have the header tank over the inner fender

As I said, Jaguar has at least 5 different cooling arrangements for MKX/420G that I have seen with my own eyes, and its quite likely that your radiator has been replaced some time during the last 55 years

It took me years of searching to find a factory correct 420G header tank for my '69, and when I finally did, it had a hole, so I have retained the SS replacement item that was on the car when I obtained it more than 20yrs ago

As a MKX owner, probably a good time to understand that correct parts for these vehicles can be very hard to obtain

The brakes are a good example, having 4 different iterations

I think that mine has the correct radiator for the car and the head tank is located on the inner fender. All the holes line up for the head tank brackets and appear to be drilled at Coventry. I have pretty much sorted all of the hoses except that bypass pipe. I am finishing up a contract job and I will post pics on Friday when I get back on my own time. Thanks for all of the comments.

My radiator configuration is different than plate 39 in the parts book with the hose connections on the radiator in the book pointing inward and mine are pointing rearward. I don’t have that hard pipe and I am trying to get an idea of what it looks like so I can try to locate or fabricate one. Thanks for your question.

You must have one of the later style of radiators and header tanks if your radiator stubs point backwards, its not shown in the Plate 39, or the Parts Manual at all, and they did not have the steel pipe, there is two systems I have seen used on post '66 cars, one has twin metal pipes, the last style has no metal pipes

The pictured style has the inward facing pipes, and the header tanks sits right down on top of the radiator, I doubt many of the original header tanks would survive, they are notorious for rust.

I can take pics of mine, if you want, the late 420G has the best setup

I have found a late 66 Mk X locally. It has the exact header tank and radiator as mine and includes all of the pipes and hoses. The lighting was very poor for photography, and I will take photos next week in good light and post them. Thanks for all of the recommendations and photos.

I can take pics of mine, if you want, the late 420G has the best setup

Hi Tony. I’m not the OP but I would love to see pics of your setup - specifically the heater and bypass lines/hoses. The OP is a friend of mine and I’ve been working on his car with him.

The tons of googling and searching Jag-lovers we’ve been doing to figure out the correct routing of the system leads me to believe it’s similar to a 420G with the fender mounted header tank but even though there are alot of pics of Mk10/420G engines to be found none usually concentrate on those areas of the engine.

@BRGMKX Mike did find that local car he mentioned (which is utterly amazing around here) but I think it would be helpful to see yours as well since the parts car has been in the woods for years and we don’t know anything about its history (what’s been done to the cooling system etc…).

I just “remembered” my '69 420G presently has a S2 XJ engine in it, so that is going to bugger things up a bit, I cant remember for sure whether I had to change any cooling hoses (but I dont think so)

I did replace my hoses with a generic MKX/420 set some years ago, and my cooling system has never given any trouble in over 20 years

here is an excerpt from the 420G Parts Supplement (IPL4), and it shows 2 different radiators for the 420G, which are different from the 4.2 MKX and different again from the 3.8

I will try and take a set of pics.

The '67 420G had 2 long steel pipes, which were exceedingly difficult to remove, a very bad design, but did have the remote overflow tank 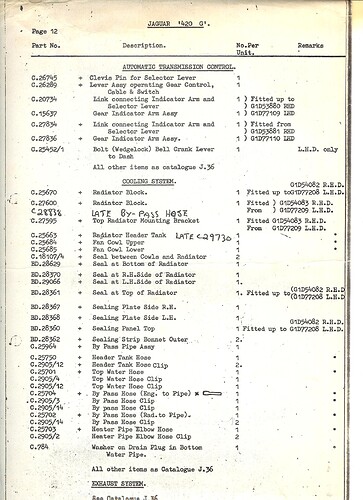 There seem to be 2 header tanks.One has nice rounded corners, while the other has very sharp right angled corners. My Gs have the rounded ones.

just “remembered” my '69 420G presently has a S2 XJ engine in it, so that is going to bugger things up a bit, I cant remember for sure whether I had to change any cooling hoses (but I dont think so)

Comparing the '66 Mk10 4.2 we’re working on to my multiple XJ engines the only important difference in the cooling system (assuming you’re still using the triple SU manifold) seems to be the location of the bypass hose. The XJ water pump has a nipple for a hose directly to the bypass, the Mk10 doesn’t. If you used the original water pump when you changed the engine it’s probably the same.

Here’s a pic of a different car (Krays movie 420G) from the internet that I think fits what we have: 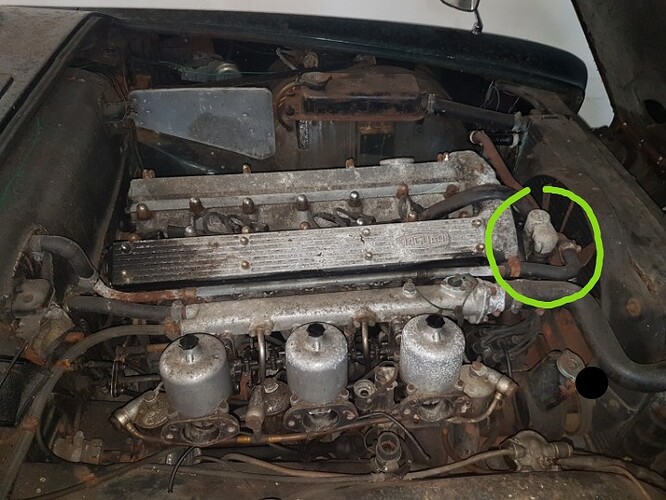 The part I circled is where I think the bypass hose off the end of the thermostat cover connects to a ‘y’ in that metal pipe that goes to the small nipple on the left of the radiator. Obviously can’t see it in the pic – but can you confirm?

ok, i will take some pics of mine asap, I have the 420G motor sitting nearby,
but the XJ6 motor has a dual carb manual choke HS8, (and it works so much better than the ASC)

I have set up a tri-carb manual choked HS8 set on 420G manifold to bolt on, but havent got around to it yet

99.9% sure I didnt change water pumps

In your photo with the yellow circle, that metal pipe alongside the inlet cam cover is the SOB I am talking about, its very hard to remove, I took 2 metal pipes from a '67 420G, I know they are hand made SS replicas, as the flange to prevent water leaking is a bead of weld material !

I have them and will take pics

I do have the correct 420G radiator fitted, and other MKX/420G rads in my spare parts collection

( A V8 Holden 5.7L Commodore radiator is an almost bolt in replacement, only about $150)

As you correctly say, the water pump and bypass outlets are the important things

…and this reminds me, a part that also differs is part 81 Plate 5, Engine chapter, Parts Manual, which is a water outlet housing that bolts on the end of the inlet manifold, its a hard to get part

pictures coming soon as I can get to it

will take some pics of mine asap, I have the 420G motor sitting nearby,

Thanks! A pic of that ‘y’ pipe and where it connects would be very helpful. All the info is much appreciated.