Hi Marko welcome to the forum, if you look at the top right of the page there is a spy glass, click on that and type in bellows thermostat, this will return a lot of posts, take your pick.

My '64 3.8 L Mark X has what I know to be quite an old, if not original thermostat in it. How do I know it’s old? Have a look at what’s stamped on it! “Made in West Germany” It still works perfectly and I thought that was too cool to replace. 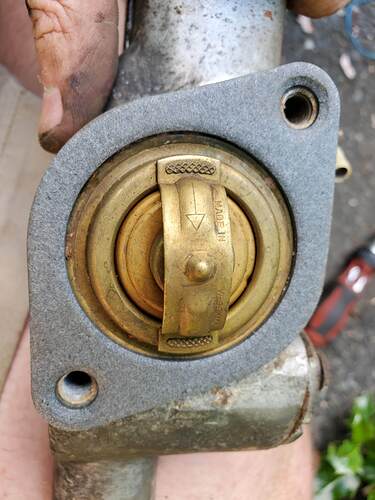 Nice…after a lot of research I’ve decided that the “modern” type thermostat is not suitable for the mk x, even though on multiple Jaguar parts sites it is listed as the part. The bellow type which covers the bypass slot is a must.
My car had a modern one, but I never saw it running and know it had issues running rich when it ‘reached’ temperature… but having read what to expect from not using the bellow style, original thermostat, with the engine basically bypassing the radiator I believe this could have contributed to the AED over running. Well that and a lot of other items I have found. Also the landrover series 2/3 thermostat is a bellow type, but not ideal but works to a degree as it is a mm smaller in diameter l47mm not the required 48mm), the skirt is 5mm shorter (10 not 15mm - ok depending on bypass slot location that varies on jags between 9 and 12mm) its use also requires modification to the thermostat housing.
I found it easier to find a bellows thermostat for a mk 1 e type, than a mk x, basically because there are lots of e types with wealthy owners wanting original restorations, and almost no demand for mk10 parts. So lucky they share a lot of mechanical parts.

I had what I believe to be the newer style thermostat in my original 420G engine for over 20years, and it never threatened to overheat.

Having said that, the 3.8 MKX may be a different arrangement than a 420G