Posted is a photo of the master cylinder and booster. This appears to me to be a domestic master grafted to a Jaguar booster, the latter presumably original judging from the yellow tag. Does anyone know anything about this modification - is it something common? The original master seems unavailable from the usual suppliers. If true, does anyone have an extra core for rebuilding? The booster works intermittently. I’ve replaced most of the vacuum hoses, and suspect the plastic elbow visible in the photo which has had a previous coating of rtv.

Second, my references show a large, rectangular radiator expansion tank over the left inner fender well. Mine is smaller, tucked away forward on the left, but looks Jaguar. Is this a variation related to factory AC?

Third, where should the windscreen washer bottle be located on this car? No sign of one. Am I correct that it is still glass in '66?

Thanks for any help.
Ron 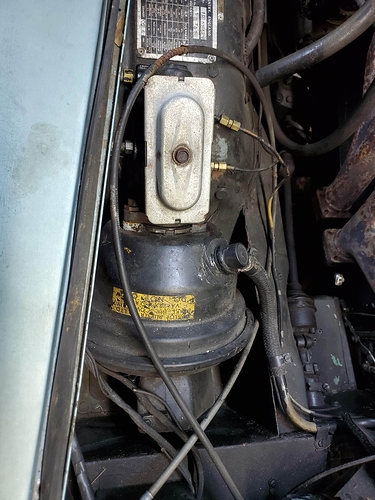 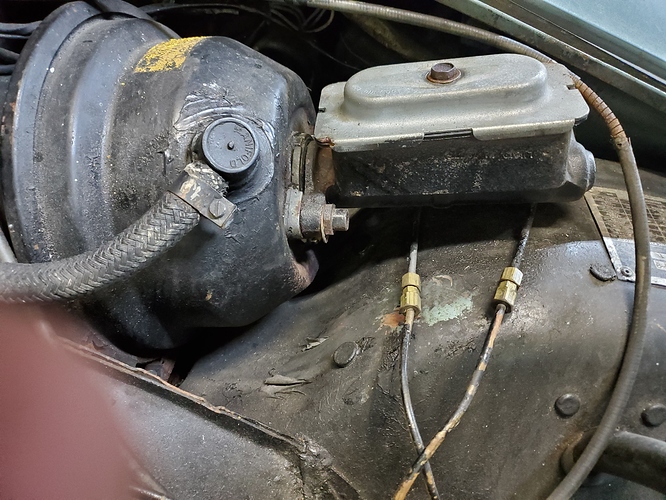 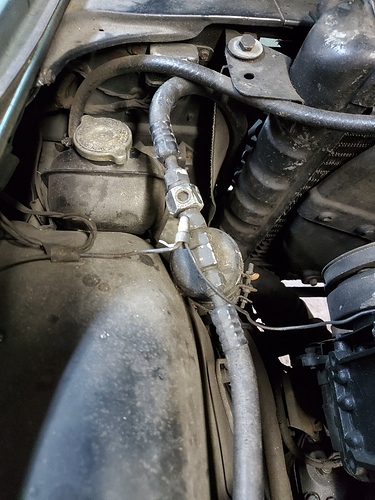 You have a Dunlop P90 booster…as far as I know they are unavailable, as are booster rebuild kits

bolts right in, thats what Jaguar dealers did

The windscreen washer bottle is plastic, and should be were your overflow tank is

All the original overlow tanks rust

I dont know where you are, but check out “james dean the Jag guru in florida” on ebay or ring him, he has a lot of old stuff

Sounds like a good tip. A quick web search doesn’t show that Master/servo by name - maybe under a specific car model?
I did get a free spares manual online by joining this group:

Jaguar owners club.More than just a forum. Join us!

To the very best of my knowledge, the booster and master cyl are a direct bolt in, no mods needed…except maybe new cunifer lines to the master cyl

Masters and boosters are not interchangeable between each other

The Girling Supervac shows up online in a search, was used in various GM models in 70s. My '78 International Scout had this booster, with a GM style master.

I had mine rebuilt a few years ago

As I mentioned, I have pictures of the “best 420G in the world”…it has a Dunlop booster that surely has been O/H…no idea how though

Hmmm. Booster for XJ 1&2 seems to be available
https://rimmerbros.com/Item--i-STC1286P--SelectedCurrency-3?gclid=Cj0KCQjwhb36BRCfARIsAKcXh6Ep9_JfyRThN8sFgcyifBqGbmXXjquwruAoFGrkT2y4565XDriisZsaAlBKEALw_wcB
https://rimmerbros.com/Item--i-STC1286P--SelectedCurrency-3?gclid=Cj0KCQjwhb36BRCfARIsAKcXh6Ep9_JfyRThN8sFgcyifBqGbmXXjquwruAoFGrkT2y4565XDriisZsaAlBKEALw_wcB
at cheap to moderate prices, but MC is discontinued. Lazar at Apple hydraulics says he can rebuild the master for $345, but make sure the two match before sending them to him. He doesn’t rebuild boosters, and warns that the diaphragms may not be available. I guess I’m looking for a core.
Ron

Booster for XJ 1&2 seems to be available…but MC is discontinued.

I’ve fit S3 MCs to two S1 boosters, one on my 71 and the other on my 73. It’s a direct swap with two minor considerations.

The brake line fittings are metric. The 3/16 brake line itself is the same, as metric and Imperial both use it. The easiest way to deal with it IMO is to get the lines from a S3, which include the tricky bends near the MC, plus the metric fittings. Then, simply swap out the fittings on the other end to match their connection points on the inner wing.

The S3 master has an integral reservoir, which is nice. But the fluid level sensor at the top has little or no clearance with the bonnet. Mine requires rotating the cap so the wires exit towards the engine. Another lister trimmed a bit of the bonnet brace away for more clearance. A local club member fit one to his S2 coupe with a ~3/16" spacer between master and booster, which eliminated clearance problems.

I got my master sleeved in SS…obtain used one from a 420G or S1XJ, and have that done…will last a life time, cheaper than a new one…and better

It was quite costly to have my booster overhauled, with “not Chinese crap parts”

It should be completely understood that the 4.2 MKX master and 420G master are completely incompatible, as the actuating mechanism distance is utterly different

I just had a look at Ron’s photo. I didn’t realize that the Mk X even has an integral reservoir. The early XJs had remote reservoirs, and I assumed that had been inherited. The photo looks similar to GM masters at the time, whose smallish reservoirs were part of the casting.

I just had a look at Ron’s photo. I didn’t realize that the Mk X even has an integral reservoir. The early XJs had remote reservoirs, and I assumed that had been inherited. The photo looks similar to GM masters at the time, whose smallish reservoirs were part of the casting.

yes, the S1 XJ and MKX/420G have remote dual resevoirs

not sure on that master…the correct one that fits on the P90 booster has its actuator poking well out, wheras the later one is more or less flush…maybe a custom actuator rod

I’m getting a bit confused here guys. Tony, I think you are still recommending that I get the S1-2 XJ core, have it sleeved, link it up with the Girling Supervac, and install with remote reservoirs (I probably have some of those). I’ve got the cunifer material and a good flaring tool. If the Series 3 is a viable option, I’ll take a look at the parts car up the street. My friend is re-lumping (Is that a new word?) his XJC that is, putting a different lump than the one already there, and has an '85 for parts. So, I can at least look at both of them. He’s probably not sure which one he will use yet, so I’m guessing he will be keeping both for now. Tony, the sleeved one is 4.2 Mk10? Not sure how it would fit into my scenario, but you can pm me if you think I should go that route and it’s for sale.
Ron

Google HydroBoost at Summit Racing and you could easily retrofit with brand new parts.

If the S3 stuff fits, I would use that

As far as I know, the booster will bolt to the pedal box…check

I can only say one thing for sure…that many 4.2 MKX have had the the booster/master replaced with the same one as used in 420G, and that the booster in S1/2 is the same as 420G…I believe the master is the same, but it may have the ports in a different location…no dramas, as new short lines can be made

New parts are usually better, and if a new booster can be had, check the price. I was told it is eye-watering. Mine cost $A400 to rebuild

My master cyl cost about $200 to sleeve and re-kit. I would attempt to obtain a used one, and have it sleeved

At this time my spare is probably not for sale sorry, its missing a tiny spring for one thing

Was able to have a pretty good drive on the car today, engine running great, still coolant leaks, but working on that. The booster usually gives me 2-3 seconds of good boost and then goes hard, but occasionally hangs in there for a normal brake all the way to stop. On the other hand, sometimes there is none. When all is working, there is plenty of brake capacity for this heavy car. All the vacuum hoses have been replaced. If I can keep it on the road awhile, I’m going to see if it will free up. I’m guessing that booster has not been in service (due to bad vacuum hoses) for a very long time, judging from everything else on this terribly neglected car. On a more positive note, was a blast to drive, loose front end and all.

I left you a voice mail.
Ron

Tony,
Reading back over your helpful posts, you mention that fitting S1 XJ brakes to a Mk10 is a mistake. I assume you are saying that the calipers were fitted. Would you mind expounding? One lister recommended I consider doing that. I stood on my stock Mk10 brakes pretty hard the other day trying to free up the booster, and came in with pretty hot front rotors and some fade. I’m wondering if that would be unusual. I’ve yet to go through the calipers, but they are not leaking.

you mention that fitting S1 XJ brakes to a Mk10 is a mistake. I assume you are saying that the calipers were fitted. Would you mind expounding?

Because the steering tie rod part No4 Plate 25 is different for an XJ and MKX, and this slightly but fundamentally alters the steering Ackerman angle in such a way that results in a much worse steering feel, and MUCH worse turning circle, that far outweighs any braking improvement obtained (according to all sources I know that have tried this)

99% sure the whole upright needs changing out as well

The same problem applies to fitting a rack & pinion steering, and cannot be overcome without a fully engineered approach

4.2 MKX had 2 different front calipers, the 2nd ones enlarged to the same as 420G …here is the Chassis num split from Parts Manual 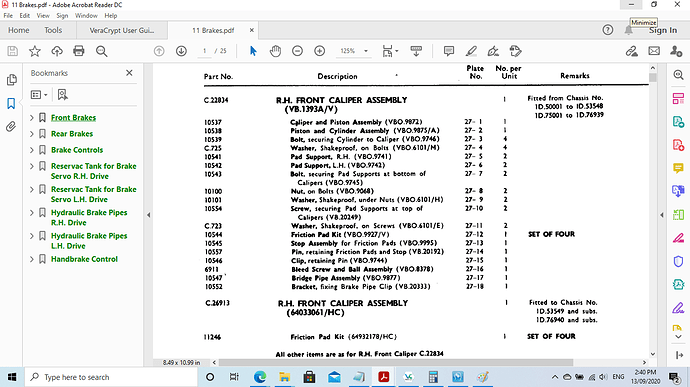 double check your rear brakes are working…I bet they arent…is the disc area obviously being swept clean by the pads ?

imo, the best option is to obtain used 420G booster/master/front calipers/discs…if you can obtain them

I am fairly certain that aftermarket calipers by a maker I cant recall atm fit, expensive, fit most Jags