I got my 240 / XJ6 3.4 running for the first time in 42 years today, started first time, oil leak from the exhaust cam oil feed banjo, maybe I forgot a copper washer? and petrol leaking badly 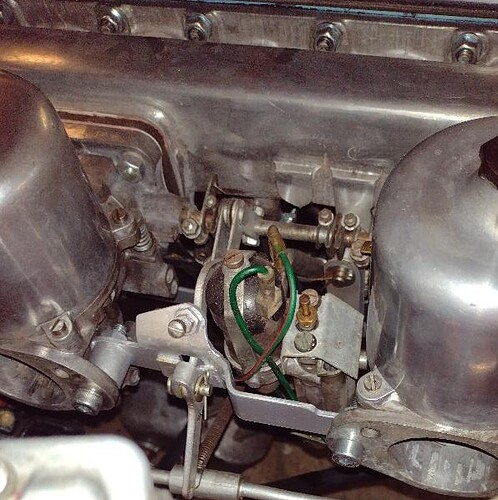 choke596×598 101 KB
out of the choke unit, am I right in assuming that the choke unit runs off the main float, if so I must have a bad seating needle valve? everything has been through the ultrasonic cleaner,
OldJagNut (KevinKeereweer) June 29, 2021, 8:37am #2

IIRC, the ASC gets its fuel from the front carb, so if it’s flooding, I would suspect the float level on that carb. I am open to be corrected here, but I think that if that level is correct, the fuel level shouldn’t rise to a point that should flood the ASC. ( auxilliary starting carburettor)

Hi Pat
As the starter carb takes fuel from the front carb I would check the fuel bowl in that carb
When you take off the top, if the level is really high I would check the fork that shuts off the valve
and make sure that when you put a 11mm bar under the fork the valve is closed .
If that is ok check that the float is not porous as they can degrade over time.
Hope you find the problem
Brian

Float floats ok, reseated toe needle valve, checked the bolt on the bottom of the “choke” unit, all tight, fuel comes out of the hole that the needle and spring sit in, the one with the screw wach side to hold the spring down, the carb does not drip fuel out of the float chamber vent, a bit comes out of the venturi after a while, I was wondering if my new fuel pump was producing too much pressure but I don/t think I have a low pressure gauge, what should it be? 4-6psi?
Maybe I will run it off a gravity feed lawn mower tank tomorrow. 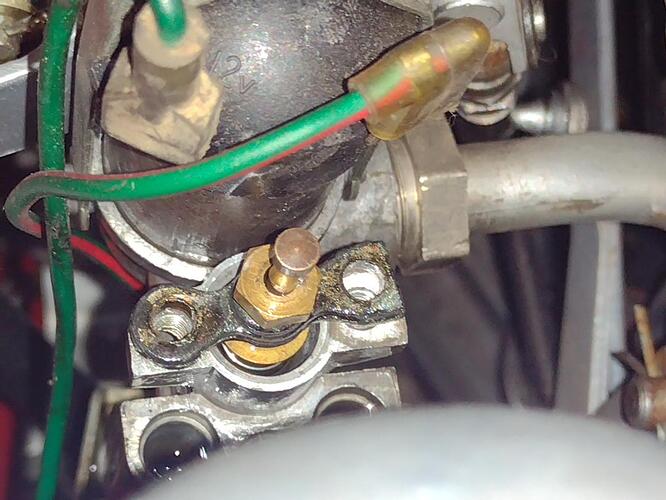 Oil leak was easy, someone left the banjo bolt loose!

Since you start the car only every 42 years, perhaps you can eliminate the cold start altogether

Seriously, one of my clients only drives in summer. The car starts well without “choke”.

I also dislike the extreme rich operation when the ASC kicks in. I feel like having to drive a 1.000 mls to clear the chambers and plugs. Did anybody measure the A/F ratio under cold start operation?

Hi Pat
Surely there should be an alloy plate with three holes in it to blank off the venturi on the starter carb
or has this been taken off with the two screws?
This centre jet could possibly then be adjusted by checking the depth that the needle screws into
the fuel supply
Brian

If you scroll up a couple of posts you can see the alloy cover, not really a blanking plate, more to keep mice out, I removed it to see exactly where the fuel was pumping out of, it came out of the needle hole, the needle is sucked down when the engine runs, I am more and more thinking that the fuel pump, a new blue German SU copy is producing too much pressure, I will run off a mower tank tomorrow,

If the pump is creating too much pressure, it would, theoretically cause both carbs to flood. I doubt it would force open the float valve. If you look closely, you will see that the point your asc is leaking is slightly lower than the carb overflow tube, so it will leak out of there before the carb overflow. I still suspect float level.

Ran it from the mower tank today, no different, floods straight away, took the carb off and stripped it down, can see nothing wrong, filled the float bowl with the top off and the fuel came to the top of the jet past the point that it should have shut off, all looks good, will order a pair of new needle valves tonight,

The normal fuel level should be just below the brass jet in the bridge of the carb.If you remove the piston and turn on the ignition, does fuel pour out through the front carb main jet? 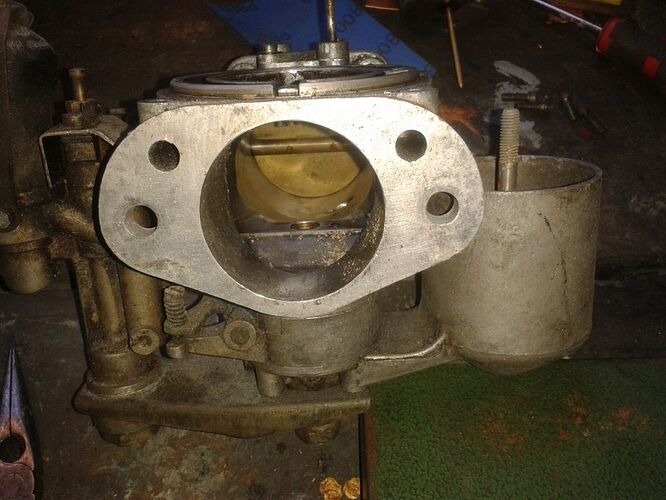 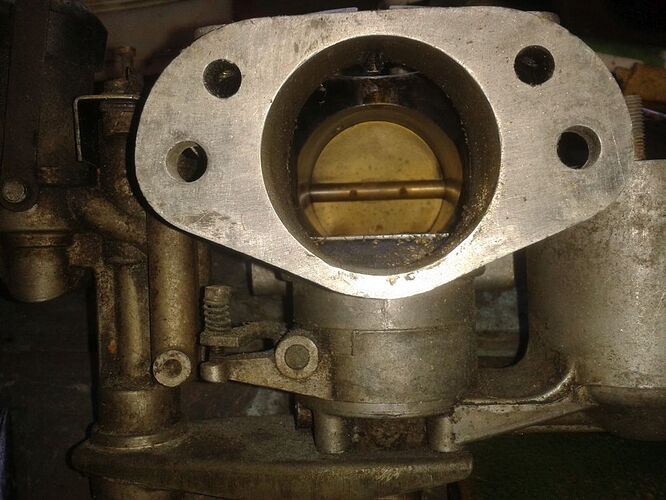 20210701_08502511024×768 119 KB
If you view the setup level, with fuel level correct, it should be just below the level of the bridge ( raised area just in front of the butterfly) and that level is below the point at which you say the ASC is leaking. If it leaks there, it must also be leaking at the mainjet, because that point is lower than the asc leak. You might be able to cure the problem by polishing the float valve and needle with metal polish and a cotton bud. Just make sure the needle moves freely in its seat and that the tang that prevents the float from dropping down too far is adjusted correctly. If not, even though the float level may be set correctly, when assembling, the float may drop down and allow the needle to bind in its seat.Also, there may be a dimple worn in the float arm where it bears on the needle; this can cause the float to stick or push the needle sideways rather than up, resulting in sticking and flooding.
wardell (wardell) July 11, 2021, 9:29am #11

Make sure you have the correct fiber washer in place underneath the float chamber breather banjo. This has some internal notches cut into it, thus enabling it to breath. This is often replaced by a plain washer. The result is the air can’t get out, the float stays down and fuel is pumped out of the easiest escape route. This is why the fuel comes out of the starting carburettor at a height much greater than the normal float level would permit.
I’ll send you a picture of the special fiber washer if you’re not sure what I mean.

they came in the gasket kit, correctly installed, if the needle and piston are in place the fuel overflows the starting carb, if removed I have a fountain out of the main jet! lawn mower tank or pump, so not too much pump pressure, checked the float arm, not dropping too low and binding, new needle valve and seat, genuine SU, 7/16" rod to check float level, float floats,
It floads as soon as the fuel level rises, not a gradual thing, 5,4,3,2,1, whoosh… 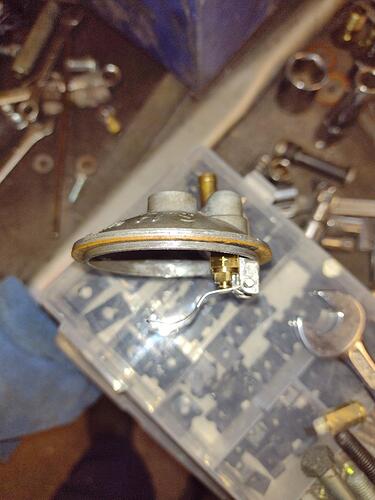 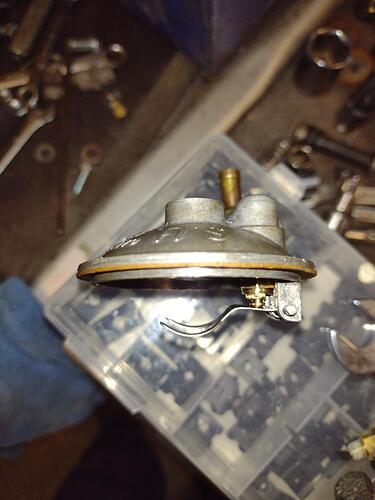 I always thought this too, and never used the ASC on my mk2, instead starting it up and holding the pedal open until the engine would warm up enough to idle. Despite replacing the fiber washers multiple times and cranking the banjo on the bottom of the fitting still weeps ever so slightly. But then I adjusted it and tried using it and the engine started and idled smoothly with it on for a few minutes then I turned it off and away I went. Wow actually worked as intended from the factory… I have O2 sensors on my car and with the ASC on the engine was idling around 12:1. Without the ASC, cold, the engine would idle up into the 15 or 16:1’s way too lean to run. So, not so rich to do any damage at all.

I may have found the issue, not tested it yet, the stud that the float fits over had some corrosion on it that could have made the float stick if it cocked over a bit as it came up, cleaned it off and will test it next week, the corrosion was not visible when the float was installed,

If I recall correctly SU pumps should put out about 2.5 to 3 lbs pressure but not sure how you measure that. Maybe there is a figure on how much they put out into a jar in 30 seconds?

Oil leak was easy, someone left the banjo bolt loose!

May have fixed the flooding issue, the float chamber breather pipe was blocked about 1" up from the bottom with a good 1/2" of solder, had to drill it out, why did they work on the XJ6? how did the pipe get blocked with solder? …
Re. pump pressure, I have been testing the front carb using a lawn mower tank so very little head / pressure,

Good question… maybe the seals on top were bad?
If you lift the tank higher you may find an improvement… maybe…

This ties in with what I said earlier, when I asked if the correct slotted fiber washer was fitted.
Having a blocked breather pipe will have the same effect, in that the petrol will be pumped out of the starting carburettor unit, because the float chamber is airlocked.

Part of the problem with solving this was that you undo the nut, remove the nut, washers and pipe, put them to one side and then look for the problem…