What fuel pumps are you using? I think the modern SU pumps are a bit over priced, I have heard that the Facet pumps are noisy? what do you recommend?

Has anyone changed the polarity of the original clock on a Mk2? I have read that they work either way but got some magic smoke out when I quickly tried reversing the polarity, and the second time I tried it did not function as negative earth, still works fine positive earth, I was thinking of insulating the guts from the case and just reversing the wiring, positive to the mount screw and negative to the spade, I would have to insulate the threaded part that the adjuster cable screws to and remake the adjuster cable in non conductive materials, thinking to cut the outer and replace with rubber fuel pipe and then do something similar with the innner, maybe some thick strimmer cord, again thoughts please, I know I can buy a circuit board and completely strip the clock to fit it but would rather spend that money on tyres!

To the best of my knowledge original clocks are not polarity-reversible and I urge care as they are very expensive to repair - mine doesn’t work but it’s going to stay that way for some time to come.

I bought a fuel pump from ebay - supposedly German made and the best you can get but it was the wrong one. I had to pay the return postage but I got my money back. I 'phoned Burlen and the guy I spoke to was great - knew exactly what I needed and it came very quickly. As I had previously broken down on a very busy dual carriageway due to failure of the old pump and had had one wrong one sent I didn’t want to take any further risks so I just paid the asking price. No problems since.

I have Hardi pumps in my S-type and XK150.
Not expensive, and a SU look alike.
And it is electronic!

The electrical HARDI Fuel Pump is a diaphragm pump. Opposed to mechanical fuel pumps it has its own propulsion (an electric motor or a solenoid coil).

I have successfully revived a few of the early ones suffering from
age-related operating ‘fatigue’, and converted a few of the later ones due to reversed polarity short circuit damage. All work perfectly. You will find it difficult to reverse the polarity at the instrument because the earthing is through the body of the main instrument.

I got the conversion kits from cars4classics in the UK for about £50 each and their current kits are not polarity sensitive. I am not aware of any other source for this service and I am very happy with the result.

I found the classic car clocks kit, around £65.00 and a major strip down, may not go back together again! as for the earthing, it is via the little external strap from one mount screw to the body, could use a stud in that position as a live and earth the spade that was the live, I would increase the clearance between the body and guts, main faff would be insulating the reset cable, thing is £65.00 here, £65.00 there adds up, I recon I will be into this car for £10k when I am finished, would have been £12k -£15k if I was not so tight, well careful, I still have a few cars I would like to restore and around 12 motorcycles waiting, when I restored my old Cessna F172M I found the rubber door and window seals from C.H.Baines for a tenth of the Cessna price, as far as I know they are still flying 15 years later…I no longer fly but GBHYR is still around. I wonder if the smoke was me destroying the diode? the clock still works as positive earth, suspect the diode was to prevent burning the contact points,

I’ve used this service by Mike Eck at https://www.jaguarclock.com/ in New Jersey who can, for $75 convert your Smiths clock to some electronic feature that gets around the known issue with them.

Feasability depends on how much power the clock is using, as DC-DC converters aren’t extremely small, nor have 100% effeciency. But if power required for clock to run is in a single Watts range (say up to 1-3W) then insulated 12V DC-12V DC or similar converter modules are available and can be wired to provide -12V output.

Some like the original style SU pumps with points as they last a long time, can usually be rebuilt even in the field, and don’t have the disadvantage of an electronic pump that “when you’re dead, your dead”. Yes, the Facet pumps are obnoxiously loud in my experience.

I have tried to get one of the three original SU pumps working but with no luck so far, maybe sitting for 40 years has gummed them up internally, also the rubber parts probably won’t like ethanol, other issue is that they are positive earth only, the new ones are neg or pos earth, currently bidding on two Hardy fuel pumps, like to have a spare if traveling in Europe… fitting two XJ6 electronic ign. modules back to back, if one fails just need to swop four wires over… 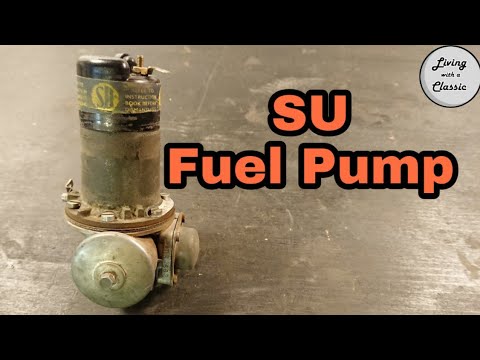 I rebuilt mine after watching it and it worked great. You might have to dress up the points, and getting the adjustment of the flipover correct is critical. If the motor hums, you should be able to get it to work. Sometimes, the diaphragms go bad. Complete overhaul kits are a little spendy, so you have to figure that in, but if you have three pumps, I would be surprised if you couldn’t put together at least one good one. It’s really not that hard.

I had the old one refurbished by the local Morris Minor specialist (very cheaply). As SU pumps were so popular in Britain in the 1960s probably any British cars of the '60s specialist could do it.