I see that there have been some previous posts about the possibility of putting a 4.2L SIII xj6 engine (or other “modern” engine) in a Mk7-9 saloon, but nothing recent. The reason I ask is that I have a Mk9 languishing in the back of my barn, and was recently offered a runner '87 xj6 engine with rebuilt transmission for free, including any other bits from the original parts car. Has anyone actually done this? The obvious obstacles are engine mounts moved to the rear for the later motor, the need for inner sheet metal reworking for clearance at the front, custom radiator, dual fuel lines, and the need for a taller rear end to work with the Jag box (vs John’s cars kit and 700R4). The advantages are EFI, AC, and “modern” reliability. I haven’t lumped a jag yet, and have a fair amount of experience with the vintage 6s, so that’s what I would prefer.
One other question I have is about the front clip. On my car, it appears that the fenders are incorporated into the cowl, in the way that Jaguar did on my xk120 - a bit hard to get to it right now to examine the A-pillars, as it’s blocked in. Are they all like that? Since mine has a doggy repaint and would need a full respray, it would be hugely simpler to design any engine swap with the front clip off. If it’s just a few spot welds and some lead, I might consider it. If it’s built like the 120, forget about it.
Any thoughts are appreciated. It’s unlikely that I will get to this any time soon, but I doo like to squirrel away the pieces as they come up.

My mate bought a Mk9 about 10 years ago, this was a abandoned project for a good reason!
The previous owner had made a half arsed attempt to fit an XJ6 engine and given up. My friend thought it would be a good idea to finish the job. It turned out to be one problem after another.
Firstly the XJ6 engine is longer, not much longer, but long enough to make sure that the fan fouls the radiator. You can’t move the rad forward because then the rad won’t fit between the front wings.
The sump on the XJ6 has ears, so the exhaust downpipes won’t clear.
The MK9 has a column change for the auto, the XJ6 is floor change, so the floor needs hacking out if you’re fitting the XJ6 autobox.
The rev counter on the Mk9 is incompatible.
The XJ6 oil filter fouls the Mk9 chassis.
The accelerator linkage will be all wrong.
The power steering pump is very difficult to fit and the drive pulley, which is off the crankshaft is extremely close to the front crossmember.
He eventually more or less got this money pit driveable and then quickly unloaded it at Buxton classic car auctions, where some unfortunate mug bought it. It then appeared at a different classic auction a few months later for about half the money.
It did actually feature in Practical Classics under an actual called , A tale of 3 mark 9s. It showed the difference between 3 auction cars; a good one, a mediocre one and bummer.
I suppose done methodically, it could be done, but it’s by no means a straight forward swap.

I have an old MK7 (wreck) that has had a 4.2 short stud motor transplanted into it.
(so engine mounts probably would not have had an issue, it has the original 4 speed manual gearbox

The motor has seized, it has a plaque saying it was a concours winner at one time

The temp/OP gauge has a bulb (that is not fitted), has the MK7 radiator

Helpful comments. Let me make the point that the appeal of using the '87 engine is to keep all the accessories, which are quite compactly and efficiently attached. No point in using an original power steering pump or dynamo. As to the proximity of the engine to the radiator, are you taking into account that there would be no driven fan? The old xj exhaust manifold and down pipe should suffice, and it includes the O2 sensor.

I do not miss your point. This would be a complicated project. I just wonder if anyone has pulled it off.

Does anyone know the answer to my question about the attachment of the front wings on a MK9?

XJ6 engine , in my MK2 , early parts bolt straight on ,no real issues 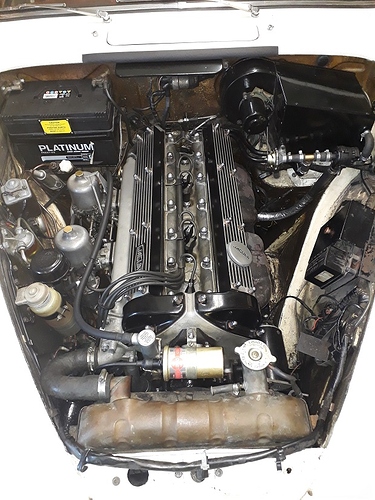 Does anyone know the answer to my question about the attachment of the front wings on a MK9?

To the best of my knowledge, the front fenders are fully detachable, they are on a MK7

Ill throw these into the mix, 4.2 with XJ sump, vertical oil filter, studs removed from the water pump ( electric fan fitted) thermostat housing modified (right angle) all syncro fitted ( then ) now fitted with a Getrag 5 . As this thread is re the drivetrain Ill stop there . 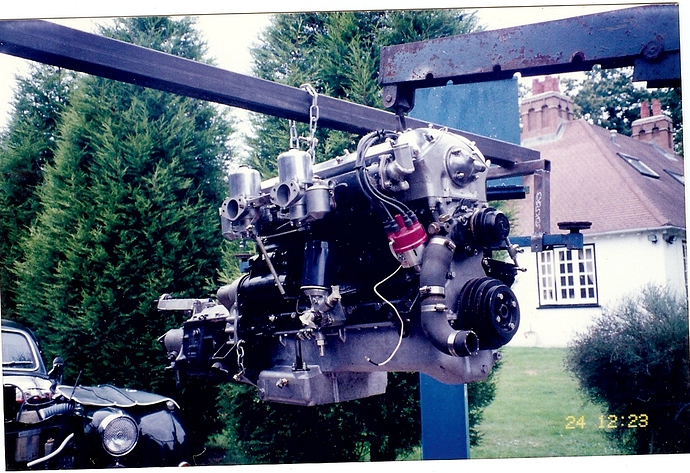 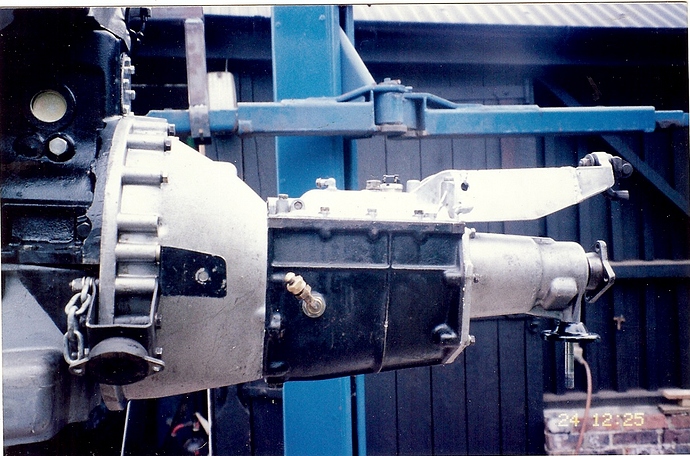 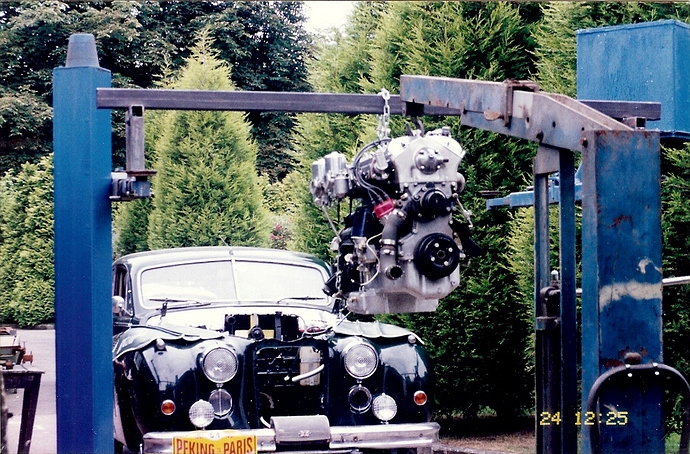 I’ve just had a look at mine. The front wings appear to be bolted along the top and at the front, but I’m not sure how they are attached to the scuttle. I wonder if they are spot welded and then lead loaded behind the chrome trim.

Interesting photos. I’m going to see if the later XJ6 engine is the same length without the fan as the 3.8, as I have both engines. As to the fenders, I’m seeing the same as you describe on my 9, Wardell. If it’s spot welded and lead loaded at the cowl, it’s probably an integral fender, making the conversion I’m considering much more difficult. Not sure why the 7 would be different - are you sure that there is no attachment at the cowl on your car, Tony? I do see a line of bolts along the fender tops.

I’m sure the 7, 8 and 9 wings are the same as far as the attachment points are concerned.

Not sure why the 7 would be different - are you sure that there is no attachment at the cowl on your car, Tony? I do see a line of bolts along the fender tops.

I am 99% certain the outer wing on an early MKVII was removable without any cutting or de-leading. I know this as I wrecked one, and a fellow wanted to buy the wing after an accident in his MK8.

I still have it somewhere, as he was a knob-jockey, and as he had not paid me for some parts he got off me earlier, I quoted him a high (but still reasonable) price. He decided a 2000km round trip to get one no better was what he would do instead. He was also arrogant with another lister on here, when he broke an axle in his MK4, and I informed him they had some

He was a real big bikie fellow whose wife had a wedding car hire business.
Put a Holden motor in his MK8

What I have seen is at least one MK7 that had filler applied in the area you are speaking of.

If you can wait, I will take some pics, and I have a MKVIIM as well, almost certain that had the fenders detached, and the seller installed them before we exchanged. He has a MK9…I will ring and ask him, as he is a mate

Tony,
That is a most generous offer, and I would be happy to wait for you to find out at your convenience.

I did try to get a look at mine today, but the doors are blocked by some spare engines (anyone in need of an xk120 engine?). I’ll scrape the area where the fender meets the cowl tomorrow and see if it’s plastic or lead…

Tony,
That is a most generous offer, and I would be happy to wait for you to find out at your convenience.

I did try to get a look at mine today, but the doors are blocked by some spare engines (anyone in need of an xk120 engine?). I’ll scrape the area where the fender meets the cowl tomorrow and see if it’s plastic or lead…

I just spoke to my friend who owns a MK9.

He stated that it is leaded at the A-pillar, however he has previously taken them off to do some rust repairs.

He is able to do lead work, however, in the past, instead of lead, I have used “Stainless Steel fibre impregnated 2 part filler”, which is very tough indeed, has some flexibilty, and even looks metallic (with a tiny skim of ordinary filler over the top, prior to paint.

How is that for a quick service answer!

I have my Mk-VIII engine and a XJ-6 4.2 sitting on my shop floor, I’ll look them over to see what needs changing, they’re essentially the same engine–same crank so won’t be longer except maybe the water pump, consider the MK-X and the 420 G were using essentially the same lumps, You say you have the US A/T conversion? if so will you send me a pic of it in that I want one! for my MK-1 and a 4,2. While the JCNA might not like conversion, if you replace the finned cam covers and the SU’s and–maybe grind the 4.2 off the side of the block, it wouldn’t be visible!

I think that was someone else who has the A/T conversion, although I expect I will do that with the John’s cars kit and GM overdrive. My main question is whether the front fenders can be removed to facilitate the engine conversion. I’ve no doubt about whether the conversion can be done, but it’s only how difficult it’s going to be. Much simpler if the fenders are not too much trouble to remove and replace. The consensus seems to be “yes”. It has been pointed out that the engine mounts are further aft on the xj6, and they will need to be moved along with modifications to the inner fender wells towards the front. Do you have any opinion about the fenders?

Do you have any opinion about the fenders?

I found that on a 420G…it had to start at 45 degrees, and level out rapidly as it went back

I’m well experienced in Jag engine installation, and have removed and/or installed engines in e-types, Mk2s, Mk10, and 420Gs. It’s a bit different in doing a modification adding the later xj6 engine because of fabrication of new engine mounts. I certainly wouldn’t dream of fender removal for a standard engine replacement. All I’m saying is that, on this beater of a car that needs a full restoration, if the front cap can come off without major panel alterations, the frame and fender well modifications would be a piece of cake, and might make the project doable overall. So, the question is not how to pull or replace a Mk9 engine, it’s whether there is anything more than a few spot welds and lead, all easy to repair, in the way of detaching the front cap. Who out there has disassembled one of these?

And thanks for your interest, btw!