Dear All
After extensive work on the MKV braking system, the brakes now work well, however the handbrake is still an issue, even with new cables recently failed to release.
Has anyone upgraded the system removing the umbrella handle and moving the operating handle to the centre of the car as in the MKIV.
If yes any guidance would be appreciated.
Regards
David

The 1958 parts manual lists parts for a handbrake in the middle of the car. My experiences with the umbrella handle original Mark V handbrake is that the cable mushrooms in the uncased length under the dash which blocks retraction. I learned to get handbrake into released position and then never use it again. Old vehicles have no inspections in California, operation is not examined or required.

Hi Roger
Thank you for the fast reply - seems like a plan.
Unfortunately (perhaps fortunately) here in NSW Australia even old cars are inspected once per year.
Our MKIV handbrake works really well, pity they changed it.
Regards
David

Yes, IME the problem is not the handle nor the cable, but the simple very crude mechanical bits inside the rear slave cylinders, they get stuck very easily and the cable does to pull them back. We still have compulsory MOT every four years for historic vehicles, and the hand brake, all lights, windscreen wipers, horns etc all need to work.

It has resulted in me opening the rear slave cylinder mechanism every four years, adjusting it and allowing the MOT/ TÜV engineer to operate it to prove it works and then never use it again.

Hi David, here is an image of the 1958 parts manual entry for the center handbrake assembly. While not very descriptive, it suggests that a center assembly is not too complicated. Maybe looking at what was done for cars surrounding the Mark V production (120, Mark IV, others?) would give an idea of parts and placement which might work if your time and energy match the project. Sounds like Pekka’s solution is easier, than the conversion, for his circumstances and might work for you. And my practice in California appears not viable where inspections for functionality occur.

Pekka and Roger
Thank you for your replies.
Roger the image did not download, I will have a look at the parts list to see what the image looks like.
Regards
David

Roger
Here is the handbrake set-up you mentioned, the rear end pivot is almost the same set up as the MKIV,
Regards
David 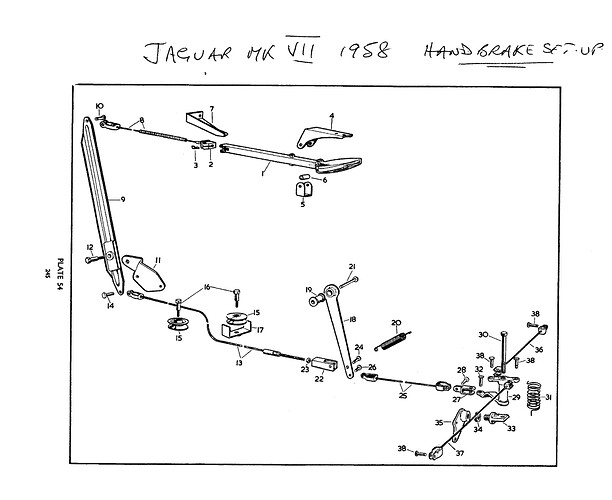 Here is the only picture I’ve ever come across of what was claimed to be a Mark V retrofit conversion central handbrake. 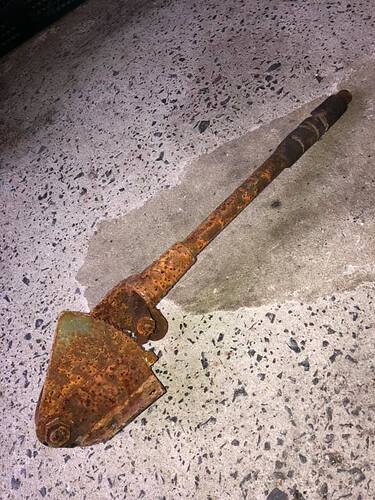 Hi Rob
Thank you for the photo.
Regards
David

It has resulted in me opening the rear slave cylinder mechanism every four years, adjusting it and allowing the MOT/ TÜV engineer to operate it to prove it works and then never use it again.

Did they ever work from new? Mine holds the car on level ground!

On any incline I have to park the car in first or reverse.

Yes, when properly adjusted it can hold the car on a ramp. But the problem is that after a couple of months it will not fully reslease and then it will wear the shoes enough to no longer have a good grip and would need to be cleaned, relubricated and readjusted.

To my mind it looks like something made by one of the component suppliers to the British auto industry like Widney Accessories of Birmingham, and may be found in some other make such as Morris, Austin, Rover or Hillman.

unless I am mistaken, that is a MKVII handbrake

another poster showed a drawing from a " '58 MKVII ", but 1958 is a MKVIII, a completely different arrangement to MKVII. I think MKIX also had the MVIII handbrake setup 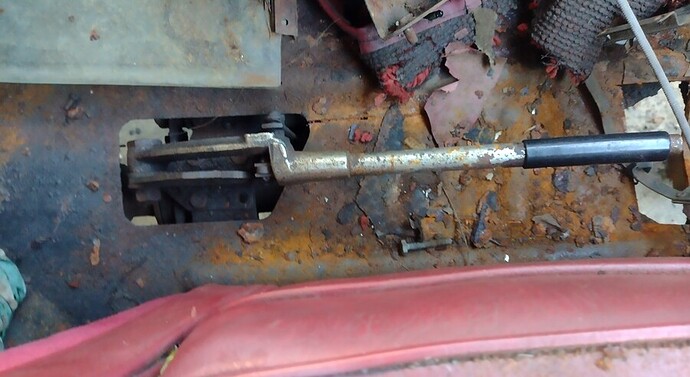 Today removed the Right Had Brake Drum and the handbrake connection, Pekka is correct, the hydraulic sleeve components did not retract fully, even with very good return springs on the shoes.
I am going to review the whole rear set up.
As said previously, the MKIV rear pivot assembly is a much better idea ( looks like reverted to on MKVIII), with the MKVII lever in the centre of the car.
If anyone can assist with a MKIV or MKVIII rear pivot assembly.would be helpful.
I will keep you posted.
Regards
David

Thank you Tony. This gets more and more interesting. So they went back to the floor mounted handle for Mark VII, which had split front seats, then for the Mark VIII which had a bench seat they went back to the umbrella handle aka pistol grip under the dash.
So it seems the best conversion for a Mark V would be to get the Mark VII parts and see what can be done with them.
Apparently there were three different levers for Mark VII.

Thank you Tony. This gets more and more interesting. So they went back to the floor mounted handle for Mark VII, which had split front seats, then for the Mark VIII which had a bench seat they went back to the umbrella handle aka pistol grip under the dash.
So it seems the best conversion for a Mark V would be to get the Mark VII parts and see what can be done with them.
Apparently there were three different levers for Mark VII.

I am thinking the automatic trans (with bench seat) would have heralded the introduction of the umbrella handle.

I believe this took place with MKVIII, but may have been available on MKVIIM, I would have to double check in Thorley

It is my opinion the MKVII parts could be adapted to suit, but may need a new rear cable swaged to correct length, maybe not, as an adjuster is one of the parts.

A C-type replica builder gave me a list of all the parts off a MKVII that he used, and the handbrake was one of them

I am thinking the automatic trans (with bench seat) would have heralded the introduction of the umbrella handle.

Using leftover Mark VII parts for Mark V would certainly be in Lyons character.
In the SPC, SD.1007 does not give the individual parts for the conversion. I looked in the Service Bulletins but did not find any mention of it. Does anyone know if it is in there, or the approximate date?

Well, I looked through all the Service Bulletins from Jan '50 through Dec '57 and there is no mention of converting a Mark V to a floor hand brake.
Allan Crouch in his book gives his opinion that none were ever done.
So if anyone wants to be the first to step into this realm of the unknown, we would love to hear about it.
Even some pictures of a Mark VII floor hand brake would be useful. 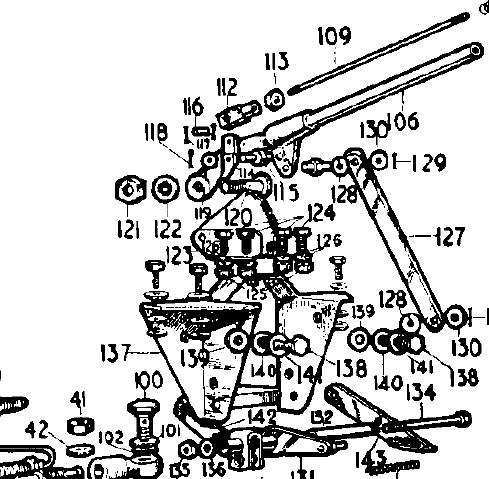 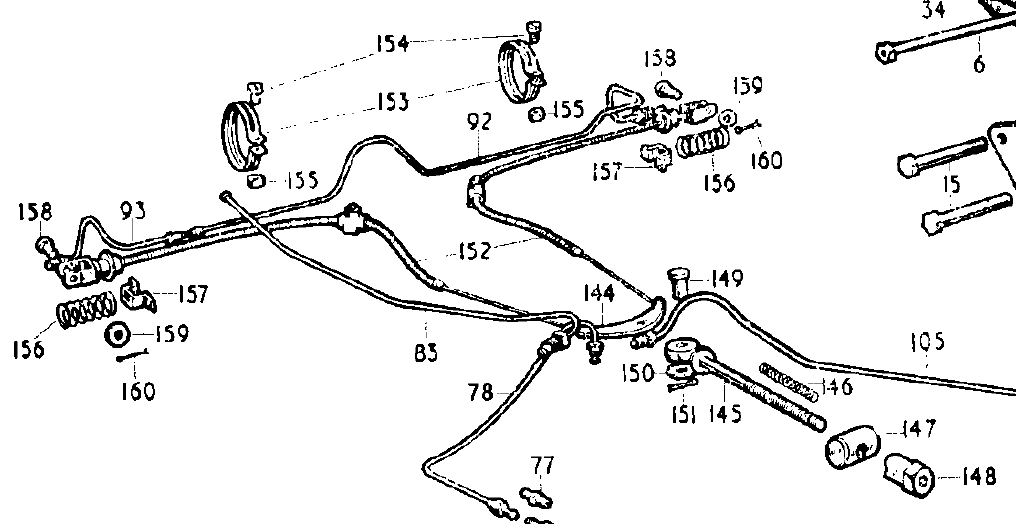 BTW the latest mention of Mark V brakes in the Service Bulletins is No. 208 where it has this:
Rear Brake Cylinders for the Mark V Fixed Pivot Type Brakes, issued February 1957: Reference Plate L17 in the manual, advised that there were two methods for securing the locating bolt, with a spring washer under the bolt head as shown in Plate L17, or with a locking wire through the bolt head, and that the two methods should not be mixed, owing to the difference in bolt lengths. The cylinder must be free to move but not to rotate. The full stoke of the cylinder and expander must be available, so the shoes are to be adjusted before fitting the cylinder or adjusting the handbrake.

Rob / All
An update, (Chassis 640290, fixed pivot type rear brakes) yesterday dismantled the rear right hand brake assembly again to check what is going on.
With the whole assembly on the bench, noticed that when the hydraulic parts are on the “piston”, in the fully returned position, i.e. no fluid pressure applied, the spring is fully compressed, the seal spreaders virtually lock the seals on the piston, this then would make the assembly difficult to fully release after the brakes are applied and released.
Tried again with the seal spreaders omitted and the system released.
More investigation needed, however the design call for the the spreaders to be fitted.

Re the handbrake, thank you for the sketch above, I notice the attachments at the brake backing plate are for the later sliding pivot type.
My friendly toolmaker suggests obtaining (making if non available) parts similar to the MKIV arrangement, using rods at the rear with the pivot without the cable.
Regards
David

Whilst prepping my MkV for a bit of tour in September I thought I better adjust my handbrake.

Two coats of varnish should do it… 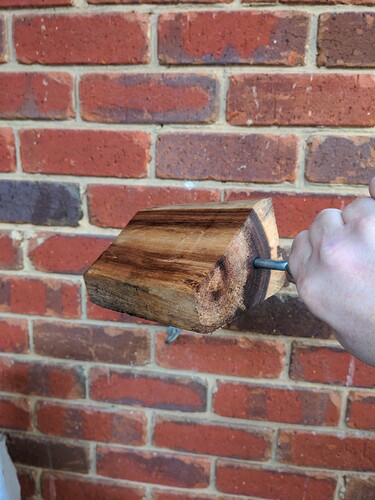