Tim part number 7 is nothing to do with offset pump, generator or anything else, it is the adapter that the damper bolts to. When this damper was introduced the nose of the crank was extended, this to accommodate part number 12 a collet.
To use a damper on the early crank a bespoke holding nut needs to be machined
Peter B

The collet you mention, number 12, is the same part on the later MKIV and MKV engines, C1931. So it would seem that part no 7 extends the length of the crankshaft to allow the damper to be mounted with the pulley forward giving a more forward position which corresponds with the more forward position of the water pump on the MKV? My head is starting to spin and I think I need a harmonic balancer!

it was only added to the 3.5 litre because they increased the weight of the flywheel on that engine which puts greater stress on the region of the shaft where it attaches to the flywheel…

I would say that it can’t hurt to have the harmonic balancer properly balanced, however I suspect that it will be the flywheel and pressure plate assembly that is out of sorts. I’ll just tick off one thing at a time.

Just to be clear, my suggestion regarding this torque reaction strut is that you remove it just to see if it alters the vibration that you have. If it removes the vibration then it would be worth experimenting with different softness of the rubber chassis mounting (or possibly just placing a softish rubber washer on each side before screwing it down.)

My MKV doesn’t have the Torque Reaction Strut / Engine Stabiliser so I can’t remove it.

No Tim the crank nose is extended, the part of the crank the adapter fits on…
Of course the damper in it`s entirety necessitated realighnment of water pump etc.
BTW is the collet part number12 fitted to your damper?
Photo shows adapter / collet and standard nut plus bespoke nut.
Peter B. 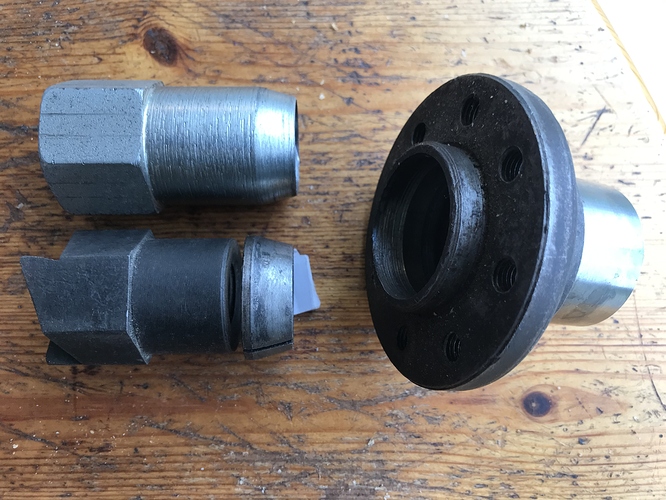 My MKV doesn’t have the Torque Reaction Strut / Engine Stabiliser so I can’t remove it.

As I said, my head is starting to spin

so I’m wondering why the adaptor isn’t fitted to the MKIV motor which has the damper and why the damper is fitted in reverse on the MKIV and MKV motor? Please forgive me if it’s obvious to you as it’s not yet obvious to me. Collet No 12 is fitted to my damper.

Tim my comments apply to the later crank damper, and in the case of a bespoke nut, when this damper is fitted to the earlier crank with a shorter nose.
Is the crank in your engine short or long nose? If it’s short nose the collet barely engages with the crank.
Take the advice of others and remove the damper for test purposes.
SS100s both 2 I/2 and 3 1/2 run without dampers.
Peter B.

The crank is a ‘long nose’. I shall take the advice of others and see what transpires.

Thank you for you comments and suggestions.

Here is a shot showing why the generator had to be moved forward to clear the steering box on LHD Mark V. 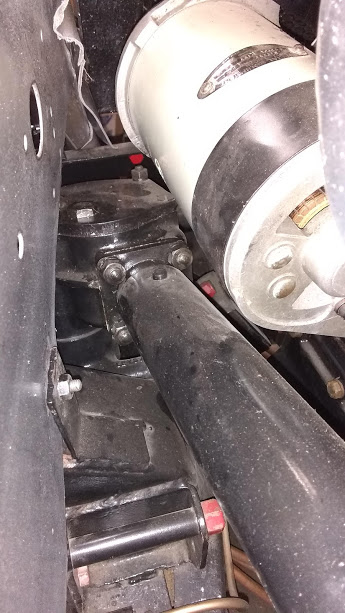 I painted on a TDC mark. 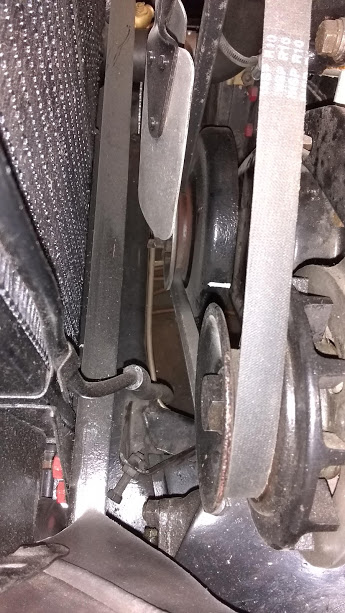 Here is a Mark V crank. 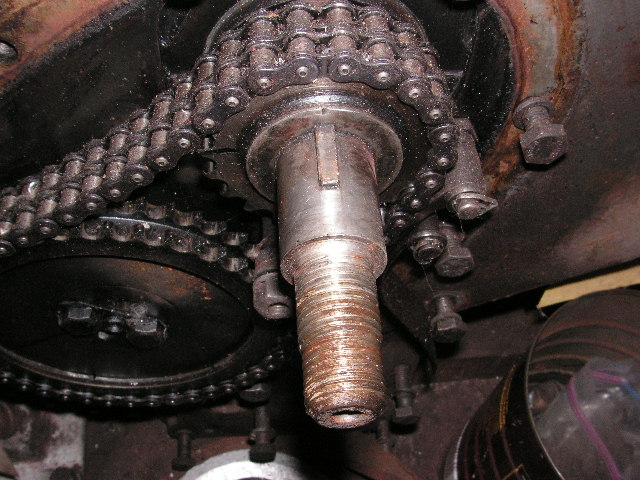 Here is a damper. 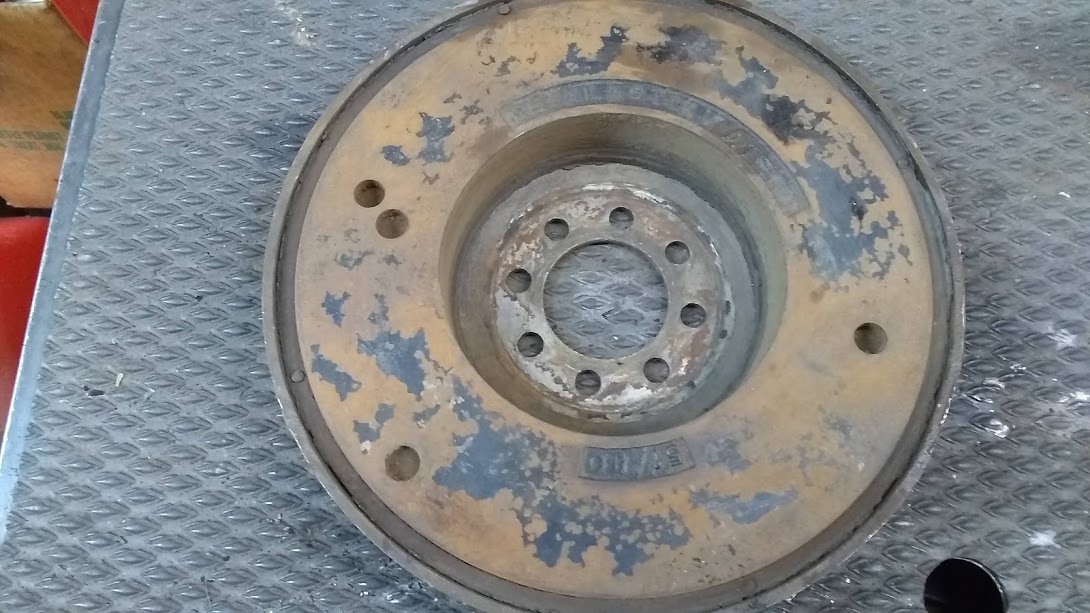 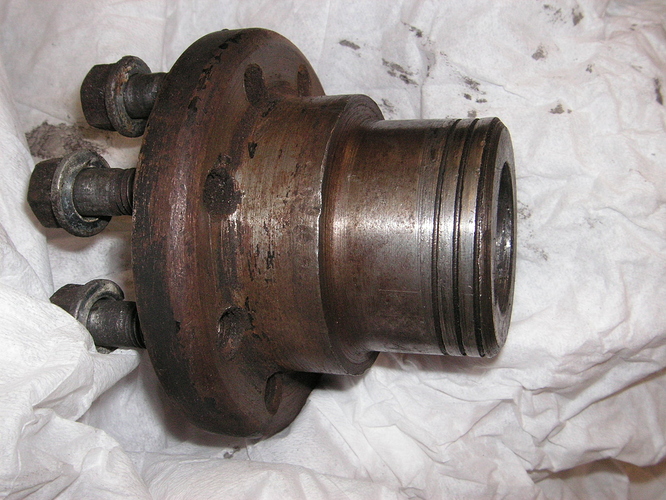 I don’t see this part on the Mark IV SPC Plate B, or any equivalent. 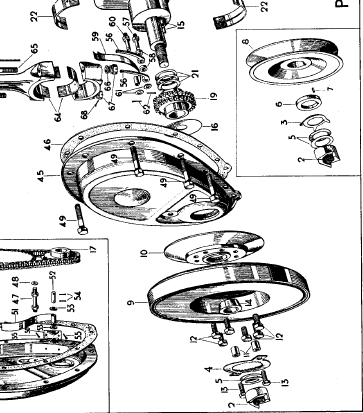 There are 8 screws, but what do they screw into on the Mark IV setup?

The fan belt pulley halves used on the Mark IV have different part numbers from the Mark V. Looks on the drawing Rob supplied that the earlier type would have threads and the later type would be unthreaded?

Also, in Rob’s photos one may see the voids machined into the flat side of the harmonic balancer for static balancing.

My (failed) engine is an SL prefix one. It used to have all the MKIV parts, but just as Rob’s photos show, the factory moved the belt line one inch forward for a reason, on cars with the steering column on the LH side, there would not be enough room.

But these dampers do not cause vibration and can be tested without one. I think brother Nantes said the damper (against harmonic vibrations at 1200, 2400 and 3600 rpm) was only installed after R&R had trashed a 3 1/2 Litre beyond it’s limits. Of course any non-balanced rotating mass will create vibrations.

My engine S1515 has the engine stabiliser which is part of the plate between the engine and bell housing.

Mine has the MKV plate fitted so no stabiliser, which I guess makes sense. What’s unusual is a MKV with a MKIV motor fitted by Jaguar in their ‘swap & go’ exchange program. Typically it was the other way around with the failure of the MKIV motor.

Anyway, the gearbox is coming out next week when more will be revealed. If the pressure plate is okay then off with the flywheel and balance the lot! It’s only money!

I think brother Nantes said the damper (against harmonic vibrations at 1200, 2400 and 3600 rpm) was only installed after R&R had trashed a 3 1/2 Litre beyond it’s limits. Of course any non-balanced rotating mass will create vibrations.

I have just had an interesting conversation with a friend. He suggested, quite logically, that when the ‘Duralim’ rods were replaced, they were often replaced with steel rods which were too heavy for the design of the crankshaft. Apparently Z-Series motors had a lighter weight steel rod fitted which suited the crankshaft. I’m still hoping that the con rods aren’t the issue and that the motor, when rebuilt by Jaguar, was fitted with the suitably weighted steel rods, time will tell. It’s such a beautiful car now and in such fabulous rust free condition that it will be a pleasure to own and drive. I’m looking forward to owning the car for many years.

“Brother Nantes” hasn’t bought into this thread, which is odd, as I value his wisdom and experience.

“Brother Nantes” hasn’t bought into this thread, which is odd, as I value his wisdom and experience.

Experience I’ll buy: at his age?

Timothy
Verily your friend spake truly.
One always looks for lightest matched sets and some Szs 3 1/2s had steel rods but I have forgotten the competitive weights, the S ones are readily identifiable by the swastika forged next to the part bumber… really.

From the Holocaust Encyclopaedia,
The word swastika comes from the Sanskrit svastika , which means “good fortune” or “well-being." The motif (a hooked cross) appears to have first been used in Eurasia, as early as 7000 years ago, perhaps representing the movement of the sun through the sky. To this day, it is a sacred symbol in Hinduism, Buddhism, Jainism, and Odinism. It is a common sight on temples or houses in India or Indonesia. Swastikas also have an ancient history in Europe, appearing on artifacts from pre-Christian European cultures.
It was also used as a symbol representing the cycle of life in the Christian Church during the Victorian era, ostensibly a symbol of hope. I guess you needed hope with a Duralim conrod! Sir Bill really didn’t have much success with his choice of symbols for his earlier cars.

The friend was Ian M. citing you, the tall, lanky Cuban!

I have been told that it is not possible to remove the gearbox of a MKV without removing the motor as well. Is that really the case?

It’s quite simple Rob, C2808 is not used , the equivalent part is integral to the damper on the MK 4.
Can you state the part numbers for
MK4 and MK 5 cranks please?
Peter B.