Hi. New in this community, living in sweden an renovaiting a 1950 mkV. I intend to put on wire wheels from british MWS but they do not carry any integrated hubs specifically for mkV.
Does any one know if the axle fitting and brake drum thickness of the XK120 w. Salisbury axle is the same on mkV and the XK120? Reason for asking is that I bought the integrated hubs for the XK140 that was supposed to fit ( due to a saying from a Jaguar “specialist”), but they didn’t. The axle fitting was o.k. but the facing where the brake drum is supposed to match was approx. 1" to far in towards the brake plate… .
Most greateful if anybody could help me.
Bo Strander

Roger Learmonth has done this to MkV. I’m sure he would be happy to give you advice. Contact (rogerlearmonth.com)

That was very interesting reading Roger’s trials and tribulations. It sounds like a huge, unnecessary expense and probably why Sir William didn’t offer it as an option. Maybe Bo ought to make sure the hubcaps are painted and fit ‘white-walled’ tyres as it would be cheaper and look terrific. He might even consider a two-tone black and cream paint scheme? I hear that’s a very smart looking choice.

He might even consider a two-tone black and cream paint scheme? I hear that’s a very smart looking choice.

Ooooh! A very dangerous path to follow that risks derision from those who don’t like to augment the cad’s car image.

Also IMO wires do not suit the lines of the MKV at all. But I think the XK120 looks much better with steel wheels and spats. (Than with wire wheels, and CWW are the worst IMO, wire wheels in body colour or silver are ok on XK120
SE’s. (And 140/150)

Basically you should be able to fit front hubs and a rear axle or driveshafts and hubs from an XK with splined hubs for wire wheels, but I would personally never ever do it.

Hi.
Many thanks to all of your thoughts, fantastic forum!!
I may re-consider my “design” on my renovation…
But, does this mean that the MkV has a set up of brakeplates, drums, brakeshoes and cylinders that ONLY was used on this model with the Salisbury axle?
Cheers from a sunny Sweden, On my way to take a swim in the lake, it´s almost 25C…

Cheers from a sunny Sweden, On my way to take a swim in the lake, it´s almost 25C…

But, does this mean that the MkV has a set up of brakeplates, drums, brakeshoes and cylinders that ONLY was used on this model with the Salisbury axle?

I think that’s the case but I might be wrong? What colour are you going to paint you car?

Hi Tim.
It’s going to be British racing green. Originally it was some dull grey greenish, looking like an army colour.
Be nice to the weather Gods, you have a couple of month with swedish summer temp- we have just passed our summer peak, that gives us 2- 3 month with ok water temp.
Best regards.

That sounds like Suede Green, and I agree not a color I would choose, but I’ve only seen it on faded old doors, not on a shiny restored car.
Pastel Green Metallic was a popular color for Mark V and I’ve seen it on an XK120 and really like it.
Only two cars ever left the factory in two-tone paint schemes, one suede green with black wings, and the other red and white. All others were single color.
The brake drums, backing plates, shoes and cylinders are not the same as XK120.
My opinion is it just doesn’t look right with wire wheels. 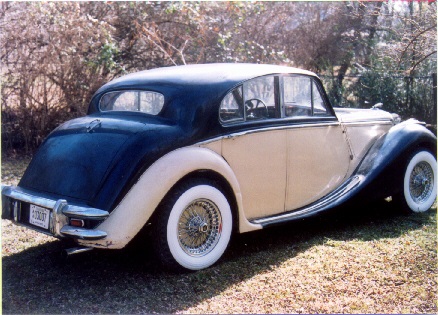 Another reason Jaguar never offered the wire wheels with the large saloons is weight. The wire wheels might not have sufficient strength to take the weight and side loading on cornering with the big IFS saloons.
So wire wheel conversions are almost unknown on Mark V, VII, VIII and IX.

This morning a set of do-able wheels, with chrome knock-offs appeared in my email (I have CF as a favourite seller)
I’d contact them pdq and it would e a lot easier than some of the Roger et al sagas. Doesn’t mention rim size but I assume 16:? 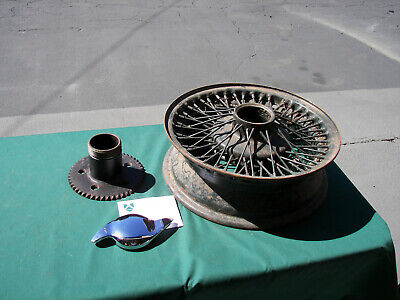 British Racing Green is one of my favourite colours. Sadly, it was not offered on a MKV from the Factory according to the books I have read, though it suits the car very well. Just remember to paint the hub caps as this makes all the difference. White walls too! 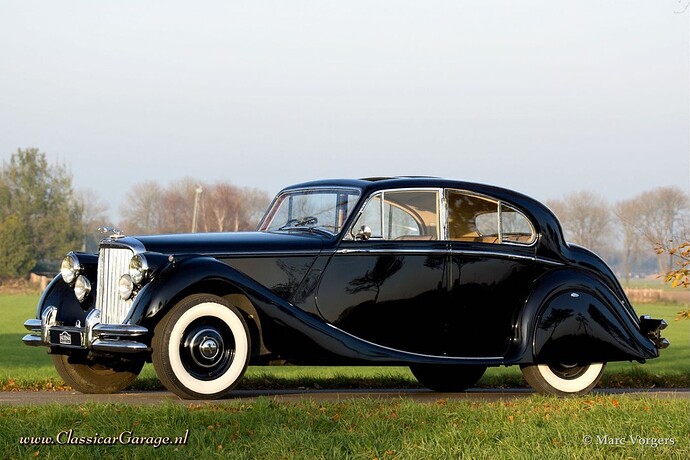 I don’t see any splines in that wheel nor on the cog hub. How is it supposed to resist acceleration and braking torsional forces?

I’d be guessing the torque is taken by the teeth around the bolt on hub?

How? Are there teeth on the back side of the wheel center?

Yes, BRG did not exist in Jaguars before 1952. Perhaps it was thought about after the first (1951) Le Mans victory.

Also it was a very rare colour on Series 1 E-types 1961-1967 and only became popular from 1968 onwards. To me a paint on an old car should be period correct, show us a glimpse of an era gone by. And not a stereotype of what people today think about Jaguars, Ferraris, Bentleys etc.

To me a paint on an old car should be period correct, show us a glimpse of an era gone by.

I totally agree! There were quite a lot of muted colours used in the 1940s and 50s They don’t look exciting but are great today for evoking the era.

Such as Lavender Grey! 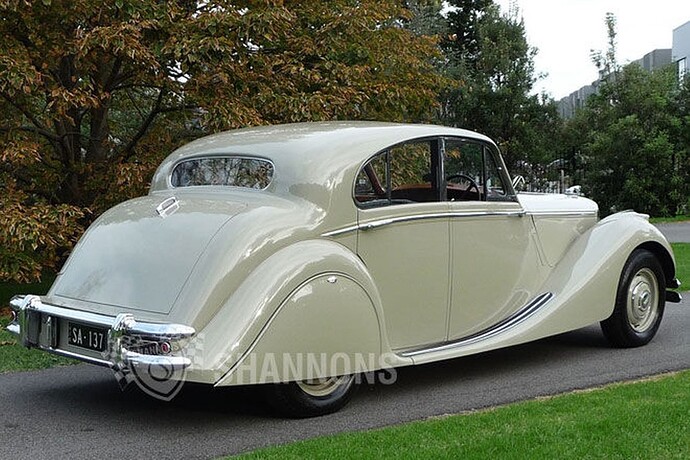 Ps. I was going to say Black & Cream but that would have been a bit predictable.

Such as Lavender Grey!

Some folk paint their drain pipes so that they stand out. Personally I like them to blend in to the colour of the masonry. I use Lavender Grey or drain pipe drab as I call it when talking to my friend with a Lavender Grey car. 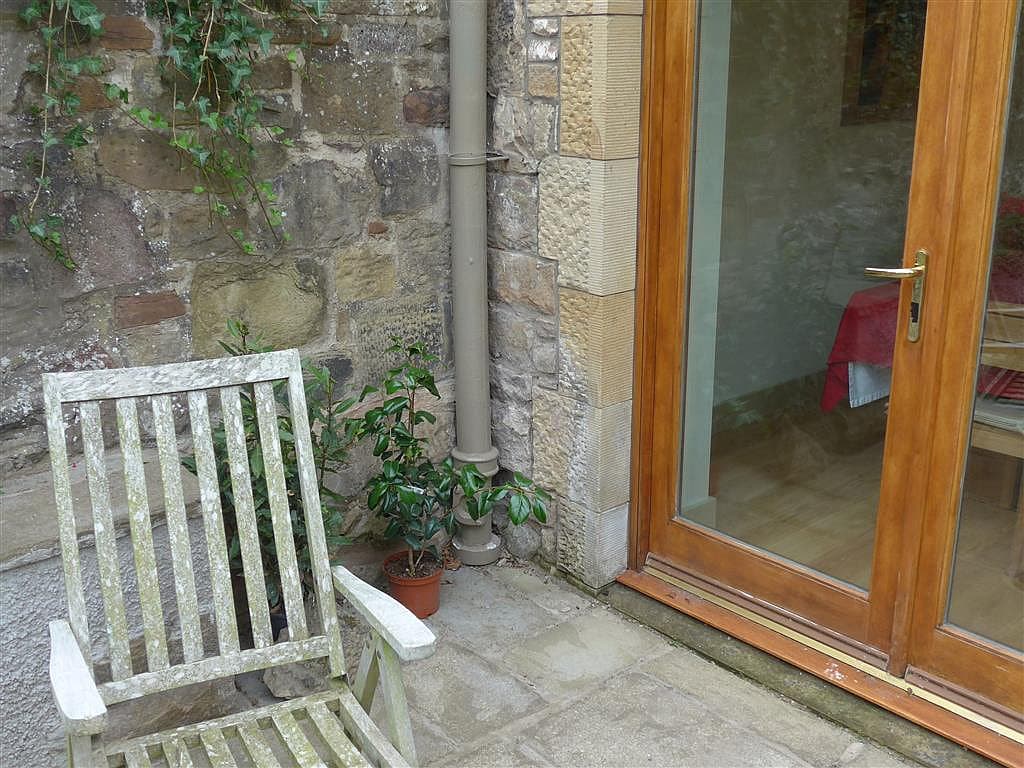 I don’t see any splines in that wheel nor on the cog hub. How is it supposed to resist acceleration and braking torsional forces

Unlike the Rudge-Whitworth system (that clamps the hub between two tapers with splines only as back-up) these wheels have hubs with coarse female serrations that are held tight against matching tooth-like serrations cut around the periphery of the bolt-on adapter flange.

I actually saw these wheels in May when I visited the Coventry Foundation en route to the Amelia show. I have a feeling the edges of both sets of teeth may have been slightly tapered in the axial plane, to jam the hub tight with zero play. I don’t recall any kind of spinner taper but I’m sure you’d get extra ebay pix by request? Basically, from a brief look-over, the system appears to work way people incorrectly think the normal R-W operates, with the teeth acting almost like half-shaft or gearbox shaft splines. Judging by the time, money and effort required to install XK wheels or similar, these appear to be an instant and reversible way to get the same look and prettier than bolt-on wires if you want that look while you sort out a nice set of ‘ correct’ standard wheels and hubcaps.

How? Are there teeth on the back side of the wheel center?

That’s what I would expect.