Not if you actually read the page, John. For export orders it’s 37.600 NOK, which at the current rate of exhange is pretty exactly 4000 USD.

You do get a set of 12 injectors, fuel rail plus hoses, new sensors and all the mounting hardware. We could probably figure that cost out. As well as the ECU, and more importantly the cost of the development time to put it all together.

It states this is all for a standard car. I would be interested to know if the ECU is open to modification by the customer, or if there is a charge for non-standard tuning. I also note that they have wide diameter, air intake tubes for sale - somewhat eye watering at kr4,000 a pop.

I’m sure @Mobeck would be happy to reply to any questions.

Hi all, I am glad you found the V12 efi kit. And yes, the price at 47000nok is with Norwegain sales tax, you guys abroad get it cheaper. Most is explained in this article. 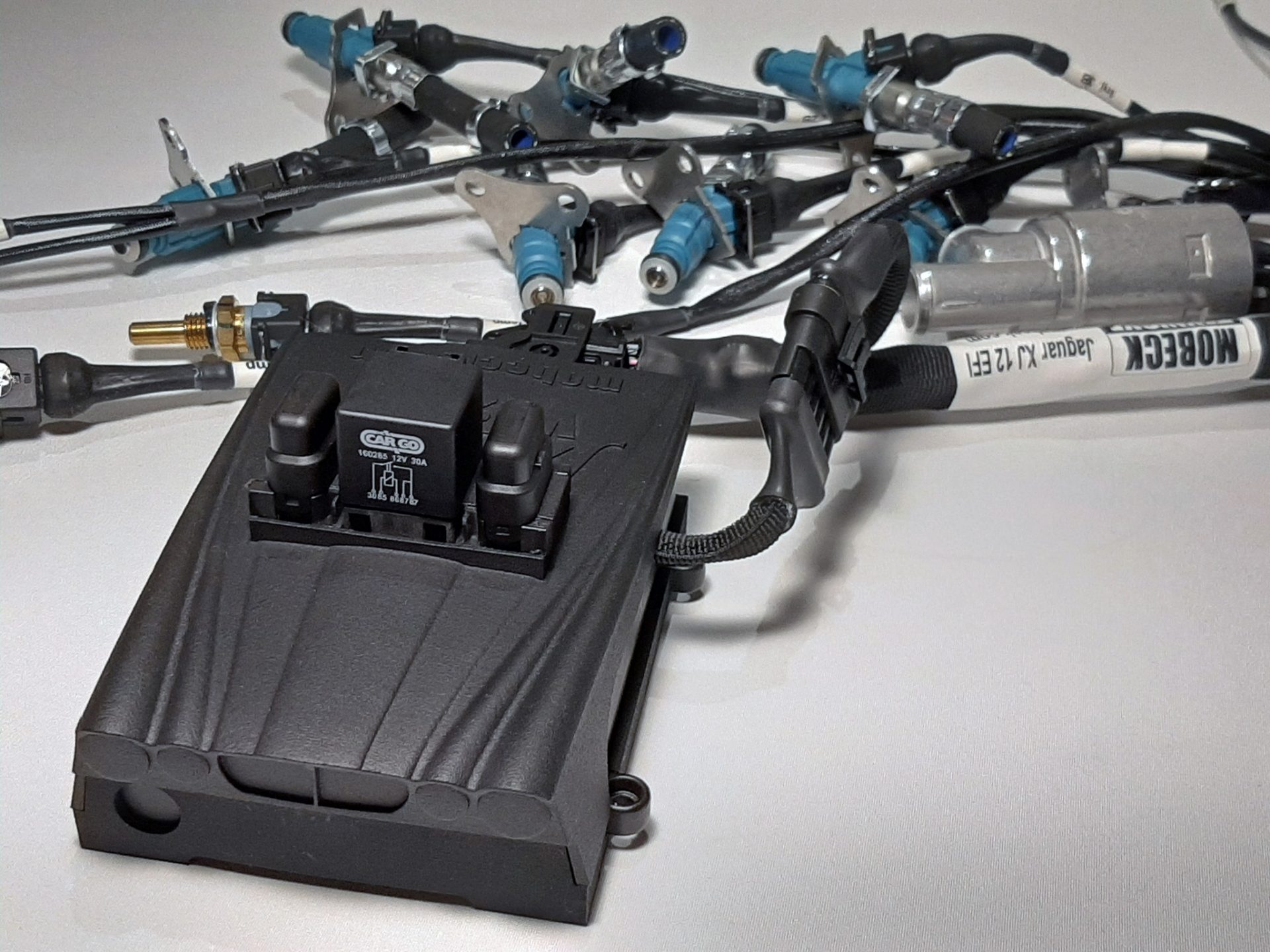 Bolt on Injection kit for Jaguar V12 Complete with everything you neednew ECU, harness, sensors and injectors.Already programmed and no need for extra triggerwheels and multiple coils.With a classic look that will feel home in your Jaguar's...

But If you have any more questions I will try to answer as best I can.

Bolt on Injection kit for Jaguar V12 Complete with everything you neednew ECU, harness, sensors and injectors.Already programmed and no need for extra triggerwheels and multiple coils.With a classic look that will feel home in your Jaguar's...

Frankly, for $US4000, that seems quite reasonable.

I’d agree it’s not outrageous at $4k. I priced out mega squirt and it got expensive fast… but that was for an ignition system too.

Like Idle control is not all about air, its also fuel and ignition, and cold start systems is not to be adjusted on a dyno. It takes months to test all temperature conditions. Luckily I had some real cold months late this winter and then real hot in May, so I was able to test from -15 degree to +25 degree celsius.

@Mobeck Your website description seems to indicate that this system is for early cars, SIII XJ12 and pre-facelift XJS. Are later cars considered? Especially for my case, any chance that it would be adaptable to replacing the Zytek ECU on an XJR-S, it’s quite a lot different to a standard set up.

Cosmo Yes, this exact system is a plug and play, pre programmed for P-Digital 81-88 cars. I made it this way so it shall be super easy for people to install it. They dont need to do any tuning by computer or anything. Just plug in to the connectors around and it starts.

And next release is for the even earlyer 75-80 cars with D-jetronic. But I need to test even more as those systems has a even worse triggersignal to contol everything with. But I am working on it. Just follow the website and you will see it, or the facebook site FB

For later cars I have made custom systems, and doing a 6 litre distributor less system right now. But it will not be preprogrammed as I dont have the car here and he has done some modifications witch I dont have control over. But it will look similar to what you have seen, but in addition I will make a new triggerwheel to mount behind the front pulley where the oem wheel is (3 tooth wheel). The 6 litre has an cranksensor there I can use if I make a triggerwheel that is more complete. And it will have two coilpacks with tripple dualcoils in the valley, so no distributor. That is a custom sytem for a customer and will not be a std product for sale on the website.

So something for the XJR-S is possible, i just need to see what sensors is on the engine, I suspect it is like the 6 litre marelli regarding the front crank trigger?

@solly… you following this?

So something for the XJR-S is possible, i just need to see what sensors is on the engine, I suspect it is like the 6 litre marelli regarding the front crank trigger?

No, it is quite different, and although 6.0L it is from TWR, and not the same as the later Jaguar engine. It uses a Lucas distributor for spark distribution, with an internal sensor for ignition timing. There is no crank position sensor. The Zytek ECU manages fuel and individual, sequential injection timing. Unlike the standard system it has 2x air, 2x coolant, and a fuel temperature sensor. It was used on the Le Mans winning XJR-9. I also have a modified exhaust system, to make things even more interesting.

Ok, I think the reason for two air and water temp sensor may be that it is 2x6cyl systems… maybe. Doesnt matter, I can make something up for you. but sooo many options and possibilityes. You can have anything you want, or completely original looking system. You need to send me an email to sort this out as there will be some questions and proposals.

Thanks Paul. This would be great if it could work on any of the TWR cars. The problem is that any XJRS, XJR-15 and XJ220 Zytek ecu’s can only communicate with dedicated software using the much-discussed and unobtanium interface box, part #SPD1039. Many pretty smart people have tried to get around this with no success.

The Zytek ecu manages sequential fuel injection, timing advance and retard, and boost control on engines with turbos. You can’t even access the lookup tables without that interface box.

So while you could basically remove the Zytek system and install an aftermarket system, which is what this is doing, how will you set baseline maps for fuel and spark? As I said, you can’t access the maps without the Zytek interface box. Unless some brave soul lets a really good tuner remove the Zytek system from an XJRS, install an aftermarket one with some generic V-12 base maps, and then start writing new maps based on dyno readings, I have no idea how anyone could accomplish this.

Having been through this myself, and after speaking to the 2 remaining techs at Zytek (now Continental) in the UK who were there when this unit was developed, I would not play around with this system. The quote I got from the best tuner I know to replace the Zytek system with a Motec, add wideband O2 sensors and knock sensors and tune it KNOWING THE BASE MAPS from the Zytek system which I can download, was over $20,000 with no guarantees it would be any better than what is in there right now.

If it ain’t broke, don’t fix it. The only thing I’m doing is adding a piggyback knock sensor with individual cylinder advance/retard capabilities. But everyone needs to decide for themselves what the risk/reward profile looks like.

I wasnt suggesting you nix the Zytek: I thought maybe any info would be interesting.

@Nick- not sure which ecu’s you are referring to as marginal, but Zyteks are in F-1 cars today, and back in the 90’s the same unit in the XJ220 was installed in the IMSA XJR-10, and WSC XJR-11, both of which ran the 3.5 liter twin turbo V64V found in the XJ220, the XJ220-C that won it’s class at LeMans in 1993 (win revoked on technicality) and the two XJ220-N cars that finished on podium 7 times in 10 races in the 1993 Italian GT championship. Certainly these units were not marginal. Were the XJRS units so much worse?

The in-period, Zytek ECU was state of the art in the 1990s. You can add the Metro 6R4 rally car, and some other Ford vehicles (ill fated RS200 I think) to the above list.

I’ve spoken to the guys who run the XJR V12 Le Mans cars at the Goodwood Festival of Speed, it’s the exact same unit as in my road car. But they were a bit shy of telling me how they changed any of the mapping settings without the Toshiba laptop and special interface cable specified in the Jaguar support manuals.

Also, any system I choose to replace the original with doesn’t have to look fancy or inconsipuous, it just has to work. Oh, and most important, I need to be able to configure the tuning settings myself.

We were not talking about Zytek systems.

Here is the final dynograph of the new V12 efi systemcomparedto the std engine
Thick lines for the std 5.3 HE. Yes it was ok, I had worked on it a year to get it 100% good.
And the thin line is the final pull I did two days ago, with my new airfilter inlets and the New V12 EFI
And that white 1985 VDP with everything else original does 0-100KMH in 6.1 sec now… 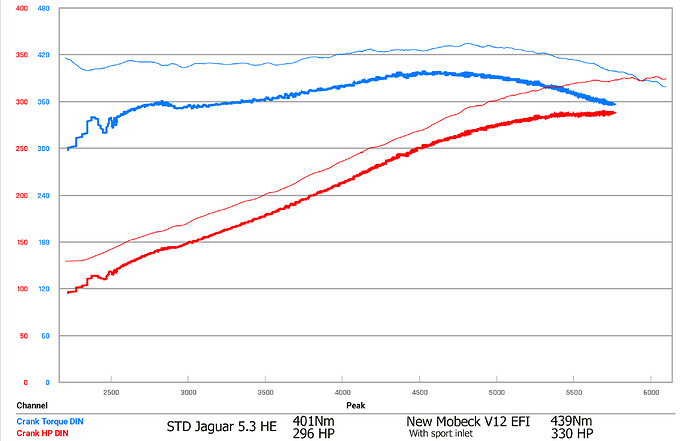