My 120 arrived from the US with horrible sealed-beam headlamps. I plan to fit new PF770 units along with all the necessary fittings. Considering that the end result will be quite poor light output along with the fact that all the parts needed are surprisingly expensive, are there any modern alternative bulb/LED mods that can be used with the 770 headlamp units?

The tri-bars look cool, but the sealed beams actually work very well, so if your goal is seeing at night rather than being seen in the daytime, you might want to try the sealed beams in some night driving before deciding to change. And now there are halogen 7" sealed beam lights.

Simon;
If you appreciate the “look” of the 7.75" Tri-Bars AND you wish to actually “SEE” the road in front of you at night, look no further than a Brit Motorcycle Shop… AFTER having the original reflectors re-nickeled, obtain thyself a pair of “BSP” LED Bulbs!! (NOT Cheap!! at about $35USD each!! I bought three-- two to use, one as a spare.) They cast a helluva lot brighter light while drawing one tenth the wattage, or amperage, whichever it is… it should NOT blow fuses, melt wires, etc.!!)
Charles Ch #677556.

Charles,
A word of warning here…
The optical construction of (Lucas) headlamps (including the 7.75 Tri-Bars) is based on the exact position and dimensions of the incandescent bulb filament within the reflector, combined with the front lens prisms.
In general a replacement LED bulb has a far larger light emitting surface, whereby both the position and dimensions of the original filament could not be copied. This will lead to a completely different beam pattern, may be still acceptable as “Daylight Running Light” but certainly not at night as you might blind other drivers. Your headlamps will also not pass any “MOT” or other similar regular testing procedures (of course different per country).

Simon,
Living in Europe, I have installed a pair of original Lucas “Le Mans 24” headlamps with the correct BPF Lucas 370 bulbs (45/40W) This was also an original Jaguar XK 120 option (1952-1954) for some countries (Lucas 51478A). Although Jaguar delivered these to LHD countries only, the actual beam pattern is symmetrical with a perfect horizontal cut-off because of the “hood” construction above the filament (see picture below). It therefore fulfills all European lighting requirements (at least in this respect). 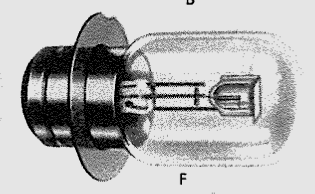 Although not as “beautiful” as the original PF 770 headlamps, it might be interesting to investigate whether UK authorities would accept this “symmetrical” beam pattern, also because the original UK installed PF770 headlamps have no “cut-off” pattern at all and the Le Mans 24 version would give much better lighting and would be “safer” for oncoming traffic.

Just a quick note
The old fashion bulbs as such there is a company in adeladie australia who refit solder the locking plate that gives correct reflective location.
These bulbs are sold through various UK outlets

Another way of improving the headlights is by direct wiring from the battery, along with some relays.

I converted to LED with bulbs from Gil at Better Car Lighting. The difference is astounding (though I’ve not driven at night, and avoid it these days if I possibly can). The old incandescent bulbs were yellow by comparison and flickered at idle. The LEDs are really white, don’t flicker at all and have a much lower current draw, judging by the ammeter. 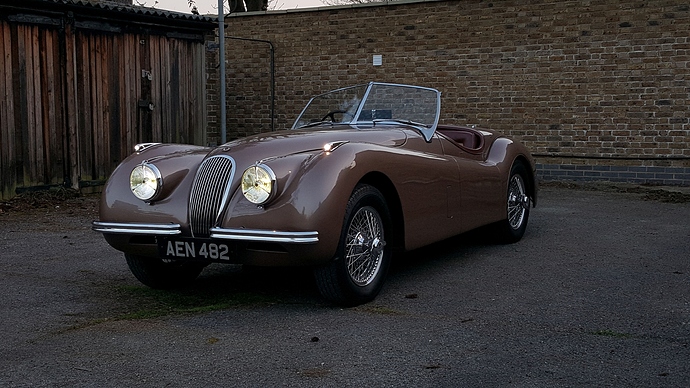 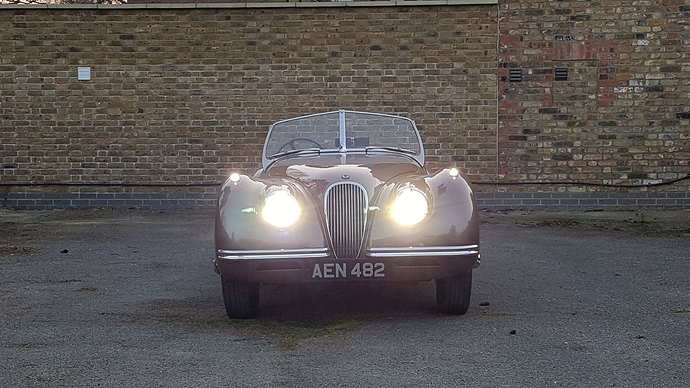 Really appreciate all the comments, really useful, thanks.

I do plan to stick with the 770 route (although having headlights with ‘Le Mans’ written on them is quite compelling!).

Chris/Phil, great shout on ‘Better Car Lighting’ - I know Gil and have bought stuff from him before, so the LED route may well be the route I take

Where are these bulbs avail?

I have 770 headlamps with halogen bulbs of unknown origin. The light is adequate for my old eyes to see a safely at night up to +90mph on open freeways. I’ve adjusted the lights so the high-beam is aimed straight and level and the ‘dipped’ beam pattern beam descends.

However, there is no ‘cutoff’ and the light does indeed bother incoming drivers. I’d like to eliminate the glare problem for oncoming drivers, if possible with these bulbs you have recommended.

Like explained, the optical system of any headlamp is a complex arrangement of reflector, bulb and front lens. Every Lucas bulb has specific dimensions like the length and exact position of the filament.
The PF770 headlamp was supplied in various different versions like dip right, dip left and non-dipped. In addition, the PF770 headlamps for the “home” market differed from the “Export” market even for RHD cars. Depending on the actual PF770 headlamp version, different Lucas bulbs were specified like Lucas 185 & 302 (RHD) and 303 (LHD countries) or even “non-Lucas” bulbs of the “Duplo type” as used on the continent, with France as an exception requiring yellow bulbs (initially even with a completely different 3 pin lamp base). I guess the situation in the USA is well known and totally different.
The Lucas 302 and 303 bulb have the same construction but the “dipped” filament is on a different position depending on RHD versus LHD. See picture below left. Also notice the extreme compact transverse filaments that were the basis of the complete optical design. Also keep in mind that these filaments emit light in all directions. You will also understand why I made the remark that it is practically impossible to replace this by a LED construction (even if based on the most recent compact Chip on Board technology). 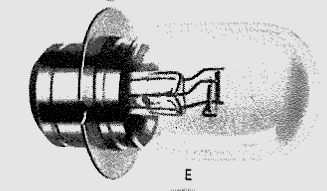 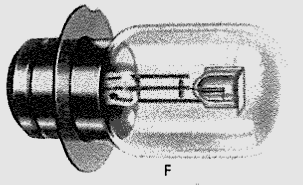 Continental European manufacturers (like Bosch, Hella, Cibié, Marchall but not Lucas) created a main and dipped beam from a single"Duplo" bulb (designed by Philips and Osram) by introducing two filaments along the axis of the (parabolic) reflector. The high beam filament is always in the focal point of the reflector whereas the dipped beam filament is somewhat “out of focus”: about 10 mm to the front and 3 mm above the axis.
European (continental) legal requirements include a sharp cut-off beam pattern which is normally secured by a (cup-shaped) shield below the dipped beam filament which prevents that light would be reflected above the horizon.
The “Lucas Le Mans 24” headlamp was Lucas’ answer to the (superior) continental designs, however still based on the British Pre Focus bulb construction. They used the 12V Lucas bulb 370 (or 371 for France). See second picture above.
I guess you will now understand that placing the Lucas 370 (shielded) bulb in a PF770 reflector unit will lead to an unpredictable beam pattern as the PF770 design was never intended to create a “cut-off” beam pattern.
The Lucas 370 bulb can still be ordered at some specialists (but reproductions) On eBay you may still find some original 370 bulbs made by either Lucas, Mazda, Phillips (12741) and Osram.

I have a pair of BPF, Lucas 415, 50/45 watt bulbs with the shield as shown in Bob’s F diagram. I don’t know what British headlight they go in.

If anyone can use them, they are yours for the cost of postage. I’m in the USA.

The Lucas 415 is a similar shielded BPF bulb however with a “transverse” filament (in stead of the “axial” filament of the Lucas 370 bulb). See picture of the 415 below. Some suppliers still recommend the 415 bulb in the “Le Mans 24” unit but you will understand that this is incorrect. 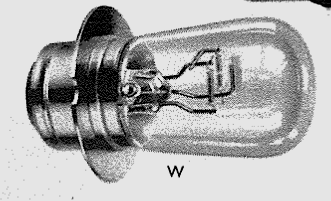 The 415 bulb is used in various (later) Lucas “700” light units (7") for LHD applications. The 414 bulb is identical but developed for RHD applications. I’ve not been able to locate any Jaguar applications for these 415 bulbs, but e.g. the Triumph sports cars TR2 - TR5 used them.

I have the tripods in a 120 roadster, and as they are asymmetrical, I sometimes get people, in daytime, to signal with theur main beams, as if they think I am running with main beams on. The height adjustment is correct.
Gil at Better Car Lighting seems to have the answer. But I don´ t really drive this car at night.

Does anyone know if they would work in the 12" P100 headlights for a right side driving country? Currently I still have the original left-dip-left/right-out setup.

Took a while, but I had to check the construction of the P100 headlamps (which wasn’t easy). Furthermore, this may now have become an item for the “Saloon” forum. But may be also interesting for the XK people.

As far as I now understand, the situation is as follows:(please correct me if I’m wrong). 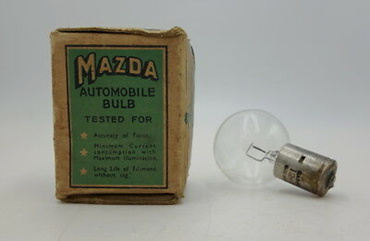 On the later Jaguar 2½ and 3½ Litre versions (Lucas indication 1947 – 1948; possibly for Export?) another P100 headlamp was available with code Lucas 50489B P100L with bulb holder 504801 for a double contact bulb. This is a headlamp without electrical dipping: dipping now obtained via switching between 2 filaments. No bulb was supplied with these headlamp: probably to be acquired locally. This headlamp was placed at LH and RH front on RHD cars. This headlamp was suitable for bulbs with BA20d cap like the 12V 35/35W bulb with Lucas code 80 (later replaced by Lucas 182).
Note that this lamp had a shield above the dipped filament: see picture. 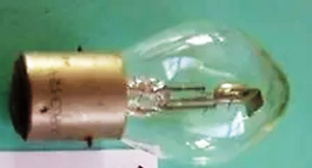 Don’t know exactly which version you have, but the 1947-1948 versions should be suitable for placing a “shielded” bulb although of the (European) type BA20d. The difference in construction between the early and the later P100s only relates to the bulbholder 504801 (double contact) that replaced 509684 (single contact).

If you want a BA20d 35/35W bulb with shield, these are still available in Europe (also with 45/40W or even in Halogen version). Just let me know.

Yes of course, I see they won’t work, I have single contact sockets. 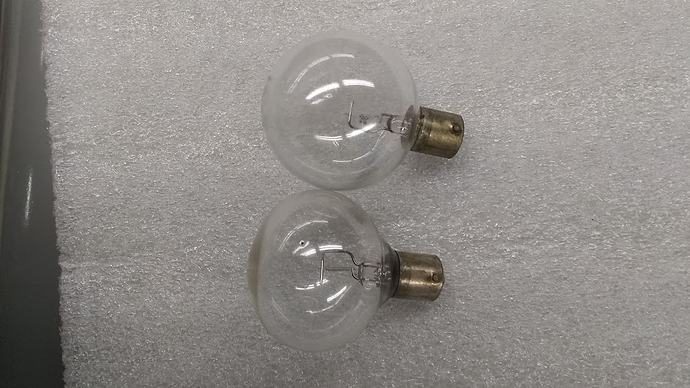 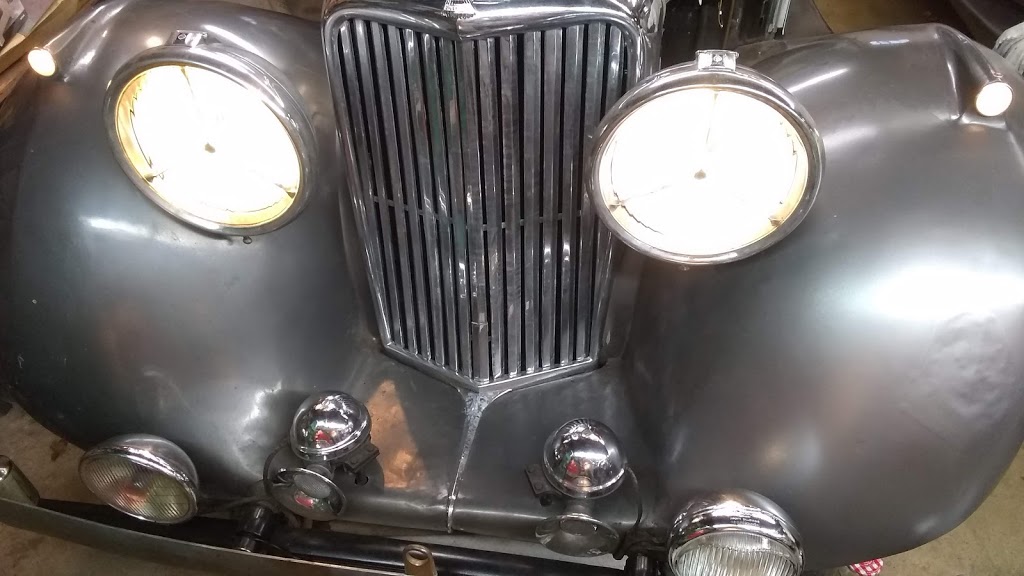 Do you know if there is a sealed beam with the tri-bar?

I tied an LED bulb in my MGTD units and they lit the trees.